MUSKEGON – Zach Berzolla has been a solid defenseman for the Muskegon Lumberjacks for more than a year now.

But putting the puck in the net has never been his specialty – at least until recently. 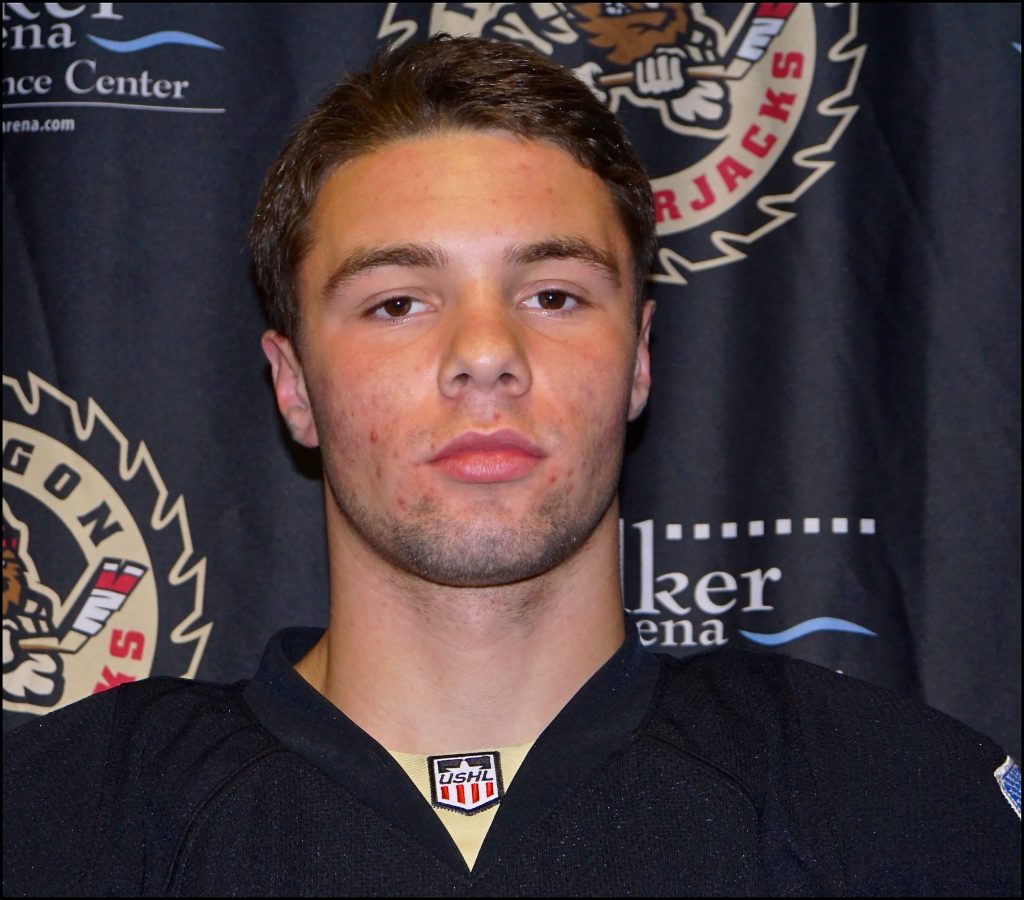 Berzolla never scored more than four goals in his midget hockey career. His best offensive season came in his first year in 2013-14, when he had four goals and eight assists in 24 games for the New Jersey Devils Youth 16U club.

He moved up to juniors late in the 2014-15 campaign, playing two games for the Lumberjacks. He spent all of last season with Muskegon, totaling five assists and zero goals in 49 games.

But Berzolla is suddenly in an offensive zone.

Overall Berzolla has three goals and two assists, leaving him tied for second in team scoring behind forward Collin Adams, who has long been a scoring specialist.

Berzolla’s offensive outburst has helped the Lumberjacks get off to a great start this season with a 4-1 record and a first place tie with Chicago in the USHL’s Eastern Conference.

The Lumberjacks return home this weekend for Friday and Saturday night games against Youngstown. Puck drop is 7:15 p.m. both nights.

“We have a better team and a great group of guys, so it’s easier for me to produce points,” said Berzolla, who’s from Howell, New Jersey. “Hopefully I can get more points throughout the season.”

“He’s a smart player that plays tough and never takes a shift off,” LaFontaine said. “He sees the ice well, makes great plays, moves the puck well and has a great shot. He is one of the leaders on this team.”

Berzolla is not the only Lumberjack on a sudden tear.

Collin Adams came into the season with a lot of expectations, after notching 27 goals and 34 assists during a sensational rookie campaign with the Lumberjacks in 2015-16.

But he got off to a slow start this year, totaling only three assists in the team’s first three games.

He caught fire in Cedar Rapids last weekend, collecting four goals and an assist in the Jacks’ sweep of the RoughRiders.

He now has four goals and four assists for eight points, and is tied for the league scoring lead with Sioux Falls’ Austin Albrecht.

On Monday Adams was named the USHL’s Forward of the Week.

A hot start on the road

The Lumberjacks first challenge of the new season was playing four of their first five games on the road.

Muskegon passed the test with flying colors, winning three of the four road contests – one in Bloomington and the two last weekend in Cedar Rapids. Their loss came in the first game of the season against Team USA in Plymouth, Michigan.

“We have good leaders and veterans who get all the players ready to play on the road,” LaFontaine said. “We are ready to compete and take control in other team’s buildings.”

The victories in Cedar Rapids were extra special.

Entering this season the Lumberjacks had posted a wobbly 2-10 record in Cedar Rapids, and had lost five straight there before last weekend.

The RoughRiders, a traditional league power, are off to a rough start with an 0-4-1 record. But it doesn’t make playing them on the road any easier, according to Berzolla.

“Cedar Rapids is a tough barn to go to and win,” he said. “Despite their rough start they are a solid team.”

Finding the Jacks on the radio

Lumberjacks games will be aired on 92.5 FM all season long…except or a few games this fall.

Fans can find the Jacks broadcasts on 97.5 FM when 92.5 is carrying Central Michigan University football games.

You can listen to home and road games all season on the radio with Lumberjacks announcer Scott Bradford calling the play-by-play action.