But the Muskegon Big Reds, ranked No. 1 in the state in Division 3, are having a different experience this season. Some of their most intense workouts come after wins.

That’s because they’ve won all but one game, and all of their victories have been blowouts, like last Friday’s 69-0 win over Grand Rapids Union. The players sometimes aren’t challenged very hard during games, so they get pushed in practice.

“We really got after it today,” said Sullivan just moments after practice on Monday. “I love it. I love the grind.”

Sullivan’s attitude serves him well at game time, because he rarely comes off the field while the outcome is in doubt. He’s a starting wide receiver, starting free safety and punt returner.

Playing that much is unusual at Muskegon, where the roster is large and the talent pool is deep. There’s no need for a lot of full-time, two-way players.

But Coach Shane Fairfield is more comfortable when Sullivan is on the field, on offense or defense.

“We tell the guys, to be a two-way player around here, you have to have a two-way work ethic,” said Fairfield, whose team will visit Kenowa Hills on Friday in an O-K Black Conference matchup. “It’s been double-duty for him, and he’s taken that on and worked really hard. It’s been a long time since we’ve had a complete two-way player.

With all the recent blowouts, Sullivan has been able to rest when the starters are pulled from the game. But his workload is bound to increase in the coming weeks. 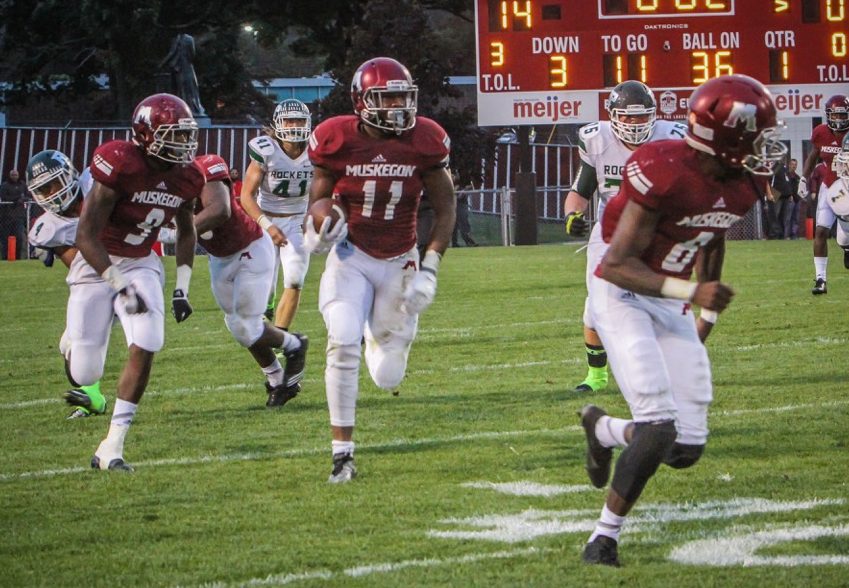 “Unfortunately for him, he’s only played one full game,” Fairfield said. “The last three games (the starters) haven’t played much beyond eight minutes into the third quarter. But as we get closer to the end, games are going to get harder.

“When it comes to crunch time, and we need a first down, I want Jacorey out there. When the other team is on the move, I want him out there.”

Sullivan didn’t have to be asked twice to play on both sides of the ball.

“I knew what I was getting into,” said Sullivan, who also played both ways last season, but not to the same degree. “I’ve been doing it since I was a freshman, so it’s nothing new. I like offense, but to me it doesn’t matter. I just love football.”

The amazing part is how dominant Sullivan has become on offense and defense.

He’s the leading receiver for the Big Reds with 15 receptions for 267 yards and three touchdowns. He’s had catches six for more than 20 yards, and averages 17.8 yards per catch.

On defense he’s among the team leaders with 23 tackles, including 14 solo stops. He also has four interceptions, including one he returned for a touchdown.

He became a “pick-six” specialist last season, returning four interceptions to the end zone. But one, in particular, stood out for Muskegon fans.

He picked off a Mona Shores pass and returned it 39 yards for a touchdown in the closing minutes of last fall’s Division 2 district championship game, helping the Big Reds nail down a 21-10 victory.

It was sweet revenge for Muskegon, which had lost its previous two games against the Sailors, including their regular season meeting last year.

“That was pretty amazing,” Sullivan said. “Earlier in the game they kept throwing my way and I got beat once or twice. At halftime I was kind of beating up on myself, but my coach told me to stay patient, and when it comes to me, make a play on the ball. That’s exactly what happened and I took it to the house.”

Sullivan’s success is no surprise, since he comes from strong football roots. 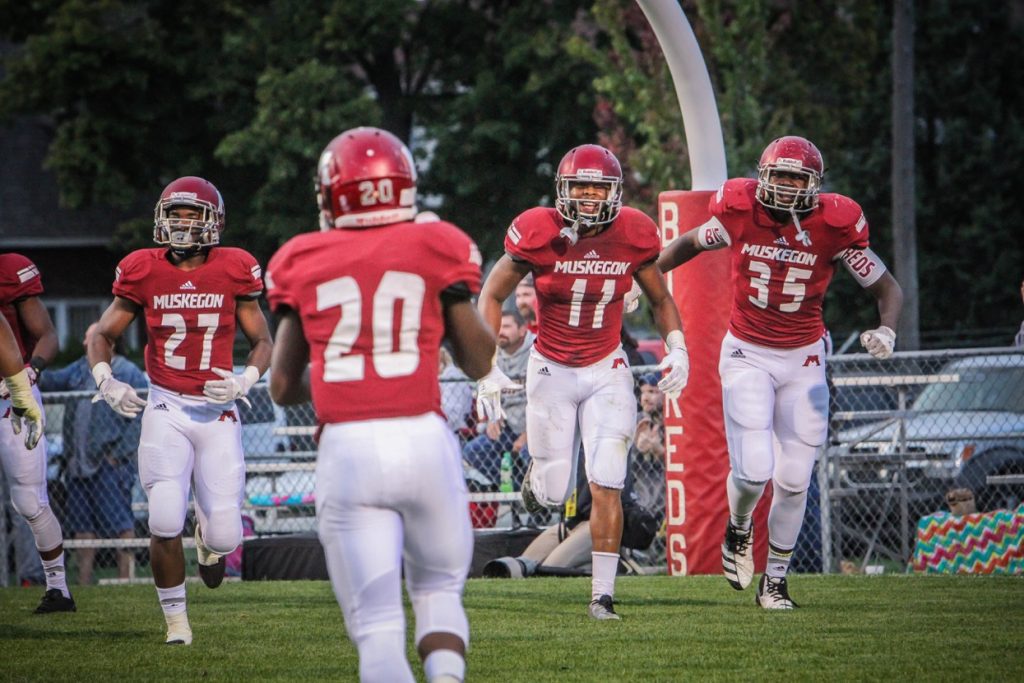 His father, Corey Sullivan, was a standout for the Big Reds, and later played for the Muskegon Thunder, an indoor professional football team, when Fairfield was the head coach.

Corey Sullivan lives in Shreveport, Louisiana these days, but still gets back to Muskegon whenever possible to watch his son play.

“I’ve always loved football, because he brought that out in me,” said Sullivan, who remembers watching his father play for the Thunder. “He was always the hype man, coming out on the field dancing and screaming. I look back on that and use it as motivation.”

Sullivan’s mother, Lachoya Bondon, also loves the game, and is happy to share her insight with Fairfield.

“She’s one of my biggest critics,” Fairfield said. “All summer long, after 7-on-7 practices, I would call her and ask her what she thought, and she would give me the rundown.”

“She loves football as much as we do,” Sullivan said with a grin. “She knows what she’s talking about.”

Sullivan’s high school days may be nearing an end, but football is very much in his future. He’s been hearing from many colleges who are eager to offer scholarships, and has visited Central Michigan and Ball State so far.

But he still has unfinished business in high school.

Sullivan was part of the Big Red squad that lost 7-0 in the state finals in 2014 against Orchard Lake St. Mary’s. Last year Muskegon fell hard to Lowell, 36-7, in regional playoff action.

So Sullivan and the Big Reds are focused hard on bringing home a state trophy this season.

“We have people who are really down to be a championship team,” Sullivan said. “We keep telling each other that it’s now or never, and we have to keep grinding to the end.”

How important is it for Sullivan to finally win that state title?