MUSKEGON – The Muskegon Big Reds got a bit of a scare in their opening playoff game on Friday night – but only for one half.

The scare came from an unlikely source – Grand Rapids Forest Hills Northern, which squeaked into the playoffs with a paltry 5-4 record.

But records can be deceiving. All of the Huskies’ losses were at the hands of playoff teams, and they proved to be a worthy opponent for Muskegon, at least for the first two quarters.

Muskegon led by just two scores at halftime, but added 35 points in the second half to force a running clock and grab a 63-14 blowout victory. 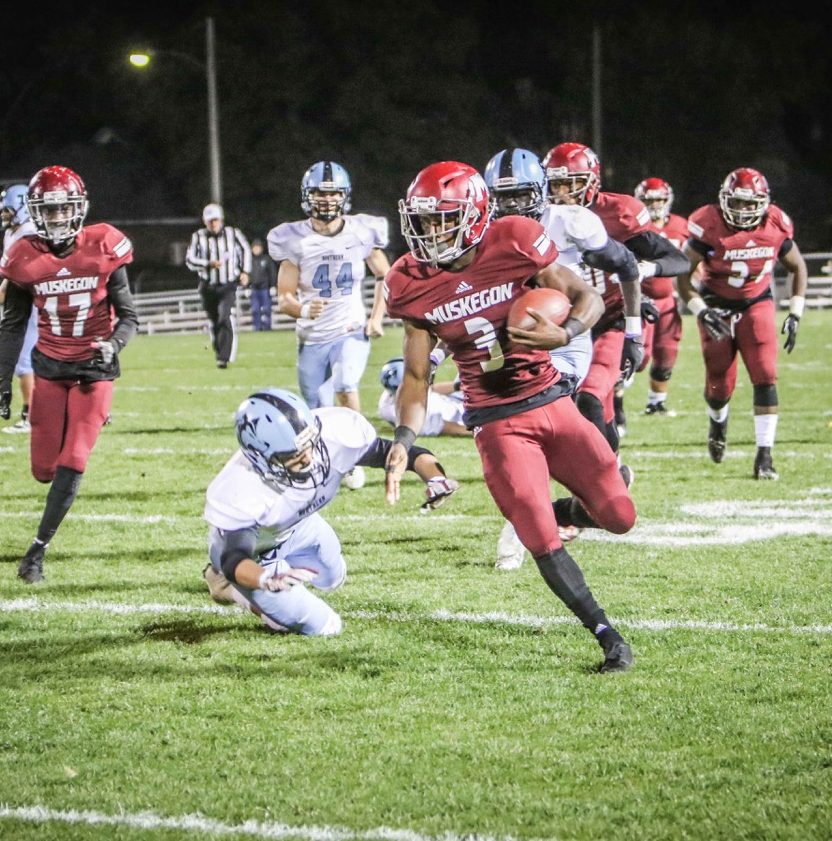 Kalil Pimpleton rushes up the sideline for Muskegon. Photo/Joe Lane

Muskegon’s quarterback tandem struck first with under two minutes remaining in the first quarter. Backup quarterback La’darius Jefferson hit starting quarterback Kalil Pimpleton, who was lining up as a receiver, over the middle for a 56-yard touchdown.

The Big Reds scored twice more before Northern got on the board.

Jefferson punched in a two-yard touchdown run with 9:26 to play in the first half to put Muskegon up 14-0. Pimpleton scored again with 6:03 left in the half on a five-yard run up the middle, and the Big Reds led 21-0.

The Huskies got on the board with just over three minutes to play in the first half when quarterback Chase Morello rolled left and hit Austin Clay in the end zone for an impressive 28-yard touchdown connection, cutting the Big Red lead to 21-7. 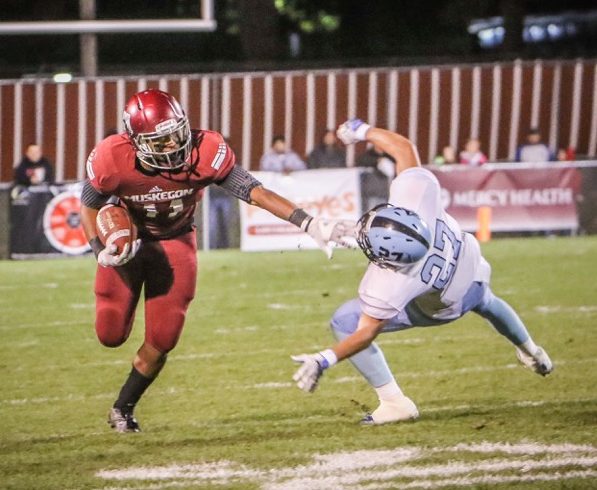 La’darius Jefferson responded with another scoring play, tossing the ball into traffic where Jacorey Sullivan made a spectacular catch at the 7-yard line and sprinted in for a touchdown with a 1:40 left in the second quarter. That gave Muskegon a 28-7 edge.

It looked like the Big Reds would enter the locker room with a huge lead, but Northern had other ideas.

Morello led the Huskies on a 13-play, 80-yard scoring drive in the final 1:40. The drive was capped on a broken play when Morello scrambled eight yards and dove in for a touchdown on the final play of the half, cutting the Big Red lead to 28-14.

Fairfield made halftime adjustments and the Huskies had no success in the second half.

“We’ve been really good at adjustments, I’ve got a really good staff,” Fairfield said. “I can sit here and draw (plays) all day long, but I can’t draw people who have the guts to tackle.

“It’s all about the kids, they took the adjustments, they took all the yelling and the chewing. I’m not a very easy guy to play for. We’re just passionate about Muskegon football and giving the kids every opportunity to be great. There’s pressure and they handled it tonight.”

In the third quarter, Clinton Jefferson scored on a 20-yard run, La’darius Jefferson hit Sullivan for a 31-yard catch-and-run TD, and Andrew Ward punched in a one-yard score, giving Muskegon a 49-14 lead after three quarters.

La’darius Jefferson scored twice in the fourth quarter on a pair of seven-yard runs.

Pimpleton led all rushers with 123 yards on 13 carries to go with his 83 receiving yards. La’darius Jefferson rushed for 91 yards and completed 7 of 8 passes for 175 yards. 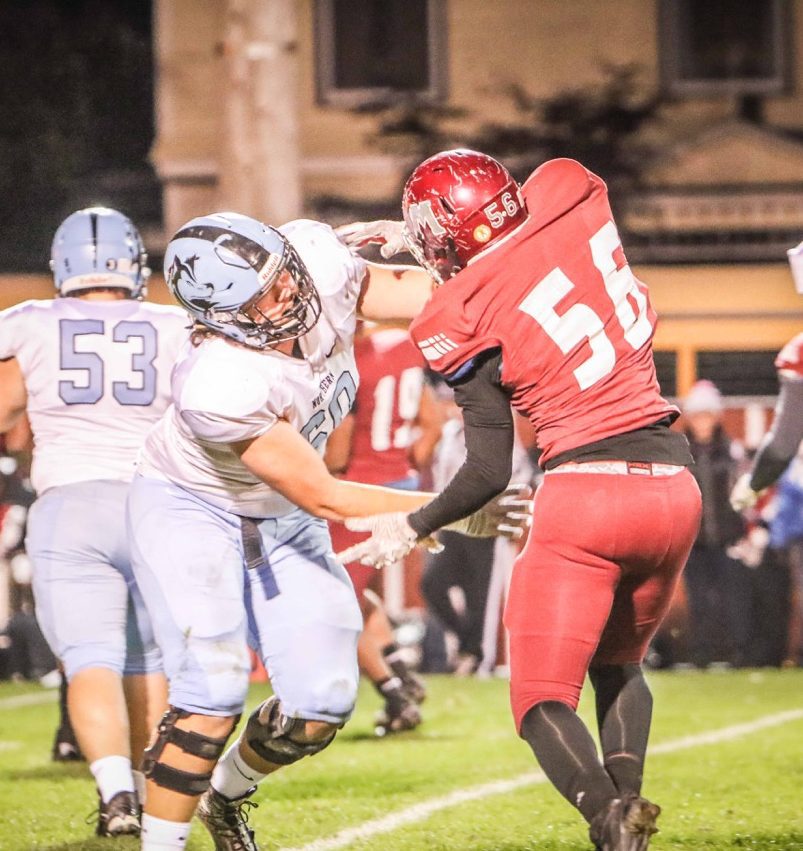 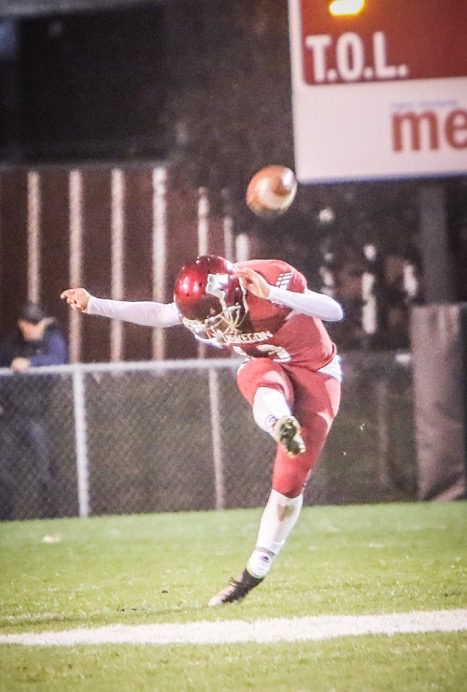 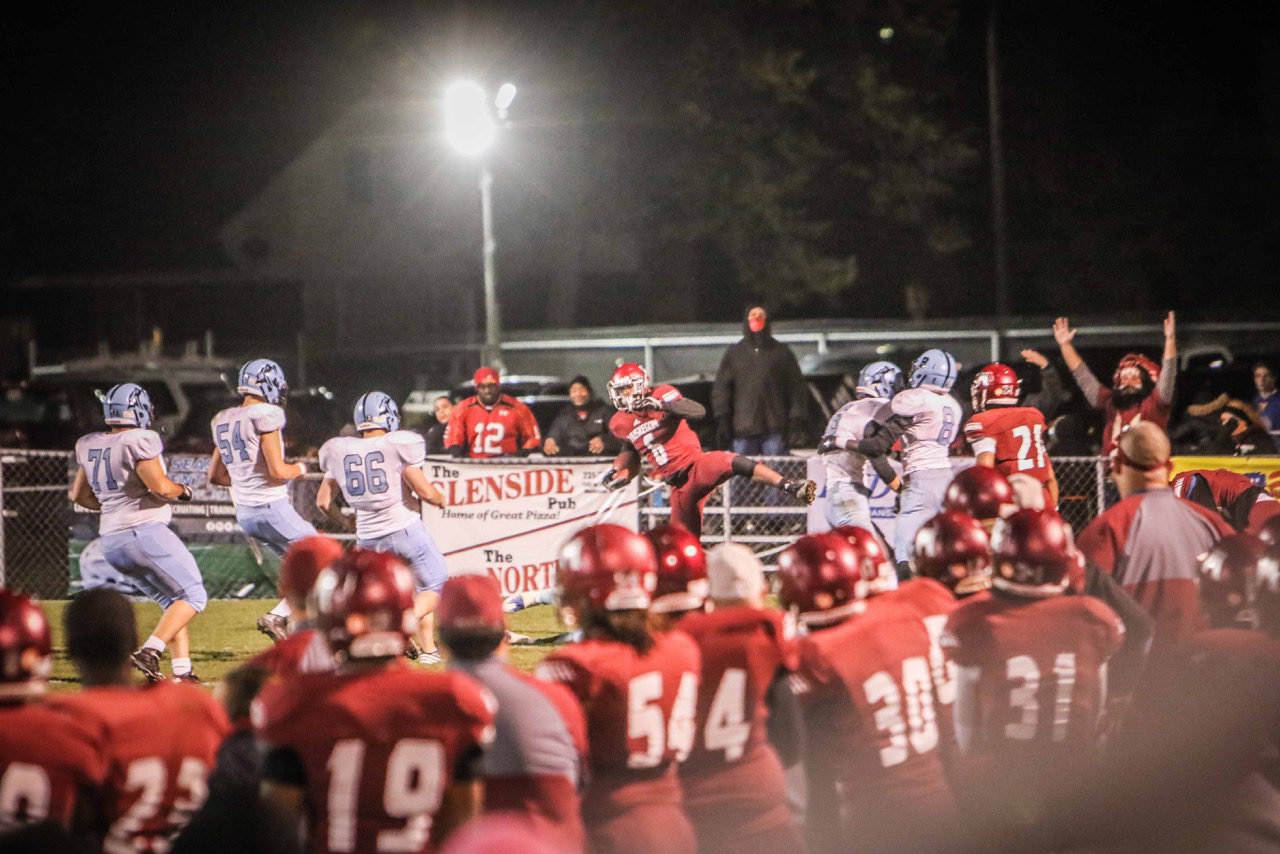 Muskegons No. 6 Clinton Jefferson Jr. celebrates in the end zone after the score. Photo/Joe Lane 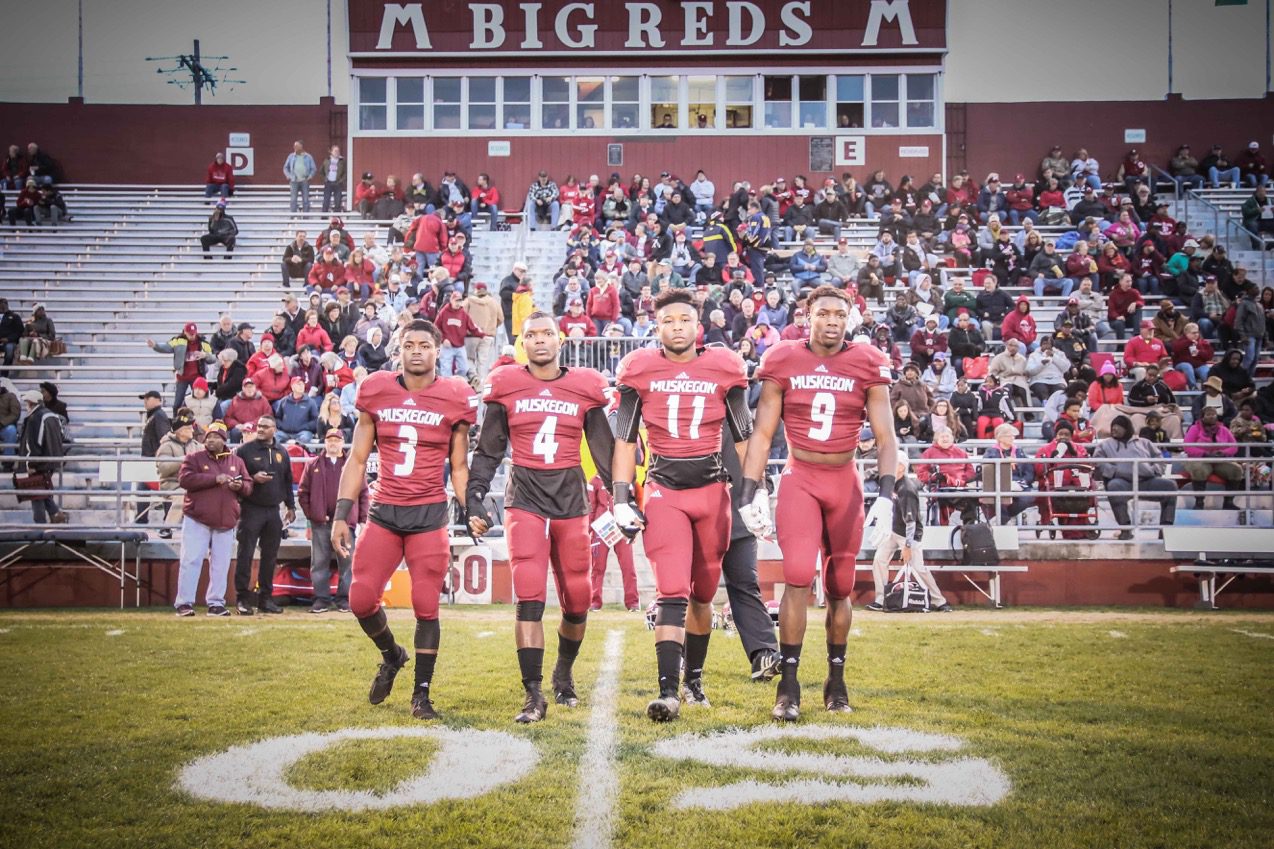 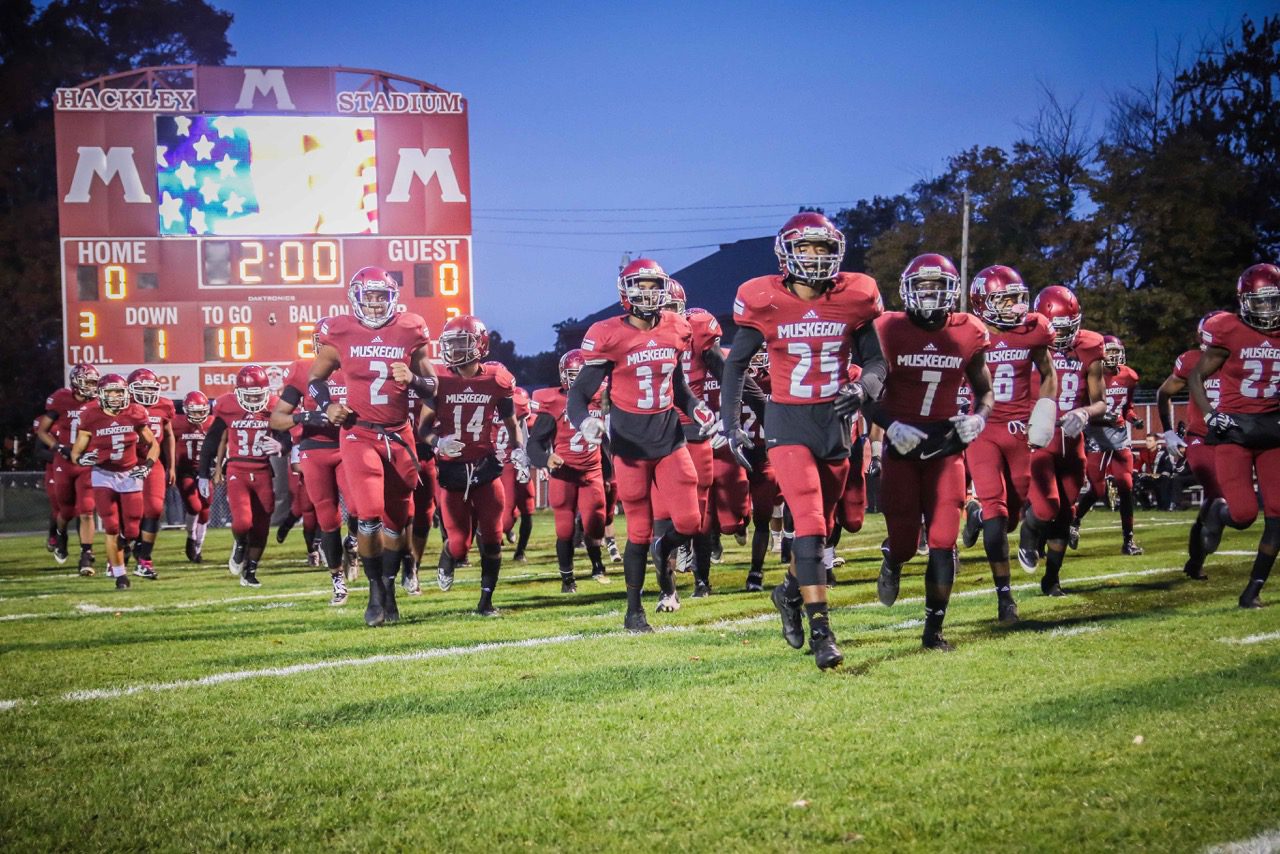 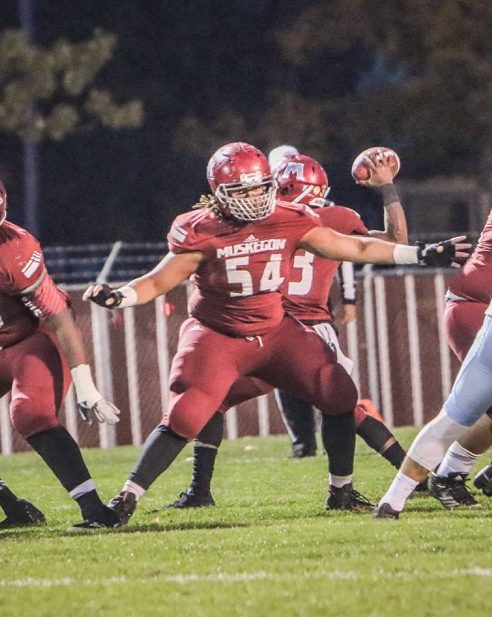 No. 54 Devin Sanders blocks for QB Kalil Pimpleton on the pass. Photo/Joe Lane 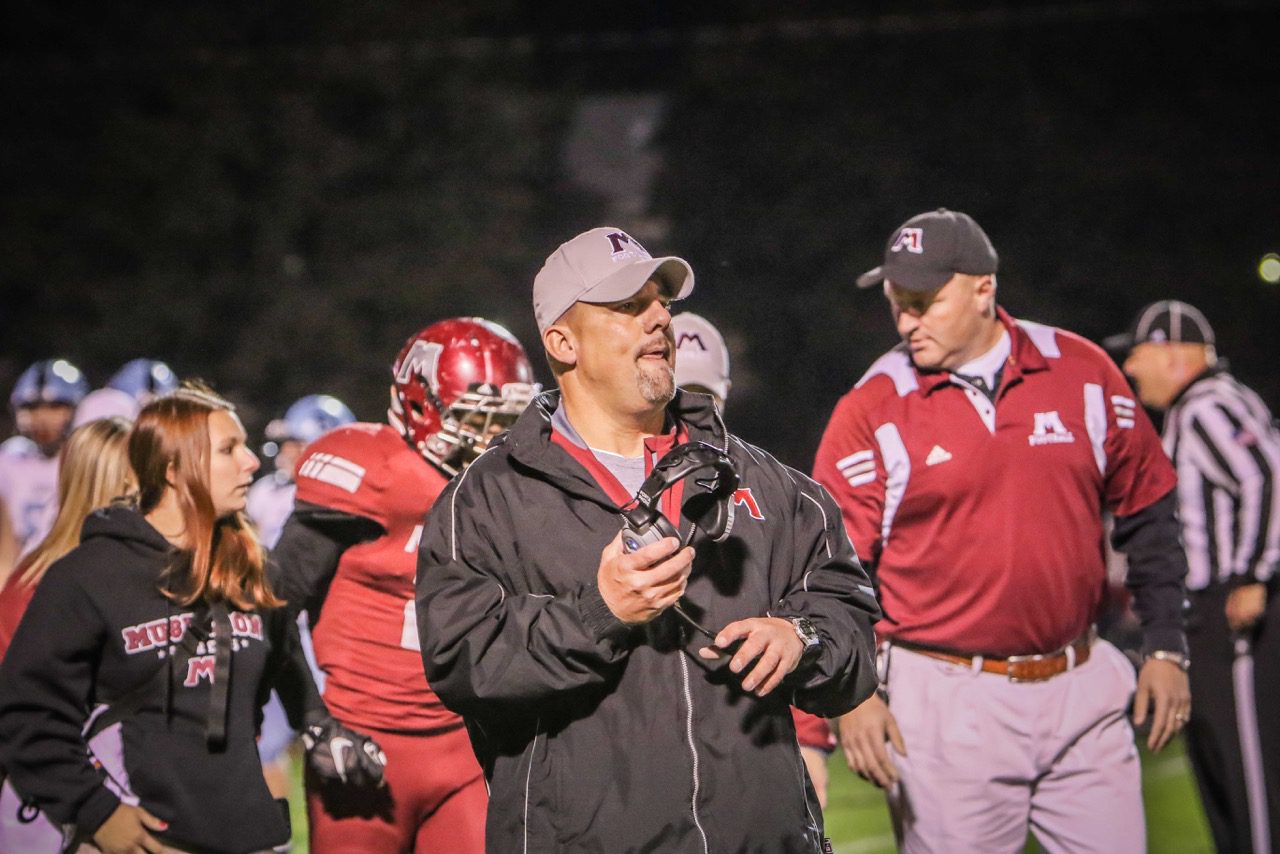 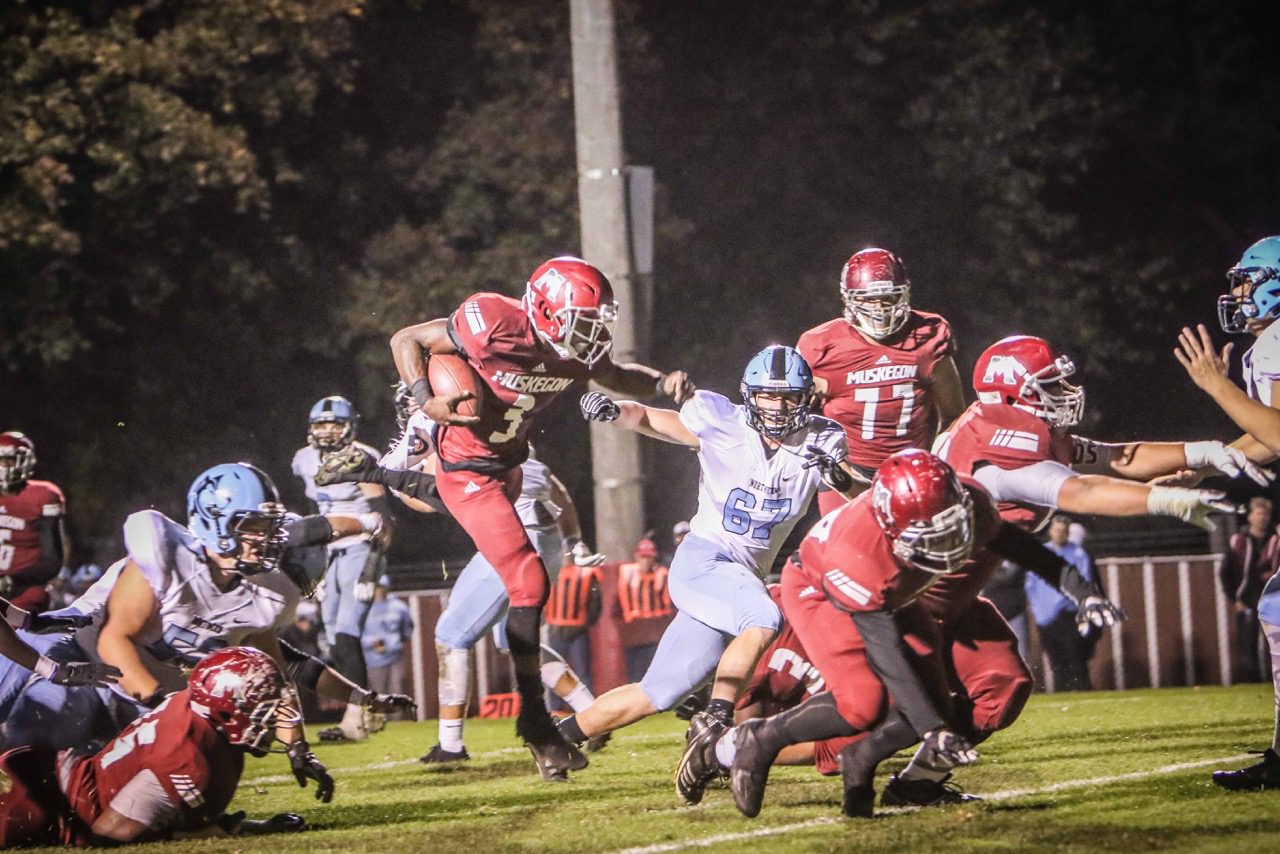