MUSKEGON – The Muskegon Lumberjacks displayed their offensive potential last weekend during the first two games of the season, scoring 10 goals.

On Saturday night the Lumberjacks’ defense and special teams answered the call in the team’s home opener at L.C. Walker Arena.

The Lumberjacks held the visitors to 10 shots through the first 40 minutes of the game, then killed off a late Team USA 5-on-3 power play to force overtime.

Then Muskegon’s Scooter Brickey notched the game-winning goal 1:14 into the extra session on a shot from the left point that gave the Jacks an exciting 2-1 victory.

“Through two and a half periods I liked our game,” said first-year Lumberjacks Coach John LaFontaine, whose team improved to 2-1 on the season. “I thought our guys played much better defense then we have been.

“I am really happy with the effort and the strides they have made. We want to get better and better each week.”

Muskegon’s goaltender Keith Petruzzelli stopped 21 Team USA shots, including a few key saves late in the game when Team USA had its two-man advantage and threatened to take the lead. 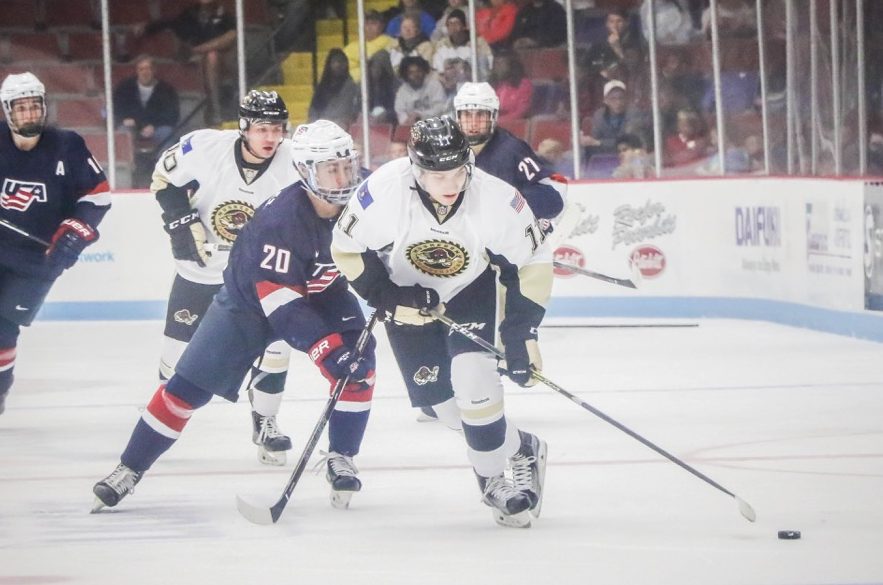 No. 11 Keeghan Howdeshell controls the puck down the ice for Muskegon. Photo/Joe Lane

“He’s (Petruzzelli) is seeing the puck right now, you can just see his poise, and there is no panic to his game,” LaFontaine said.

The game was scoreless after two periods.

Muskegon finally broke the deadlock 4:29 into the third period when Keeghan Howdeshell took a pass from Will Smith in the neutral zone and broke in alone for a breakaway goal. Will Smith and Zach Berzolla had assists.

The Lumberjacks had a chance to score the game winner in regulation with a 5-on-3 power play for 32 seconds late in the contest, but failed to convert.

The contest went into a seven-minute overtime period.

Brickey scored the game-winning goal for Muskegon 1:14 into the extra session. Collin Adams and Logan Drevitch assisted on the goal.

The Lumberjacks will travel to Cedar Rapids next weekend to play the RoughRiders on Friday and Saturday night. 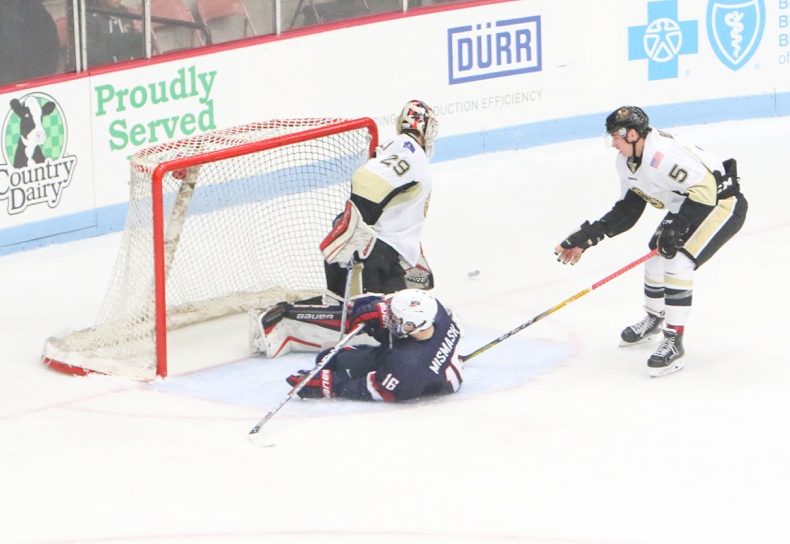 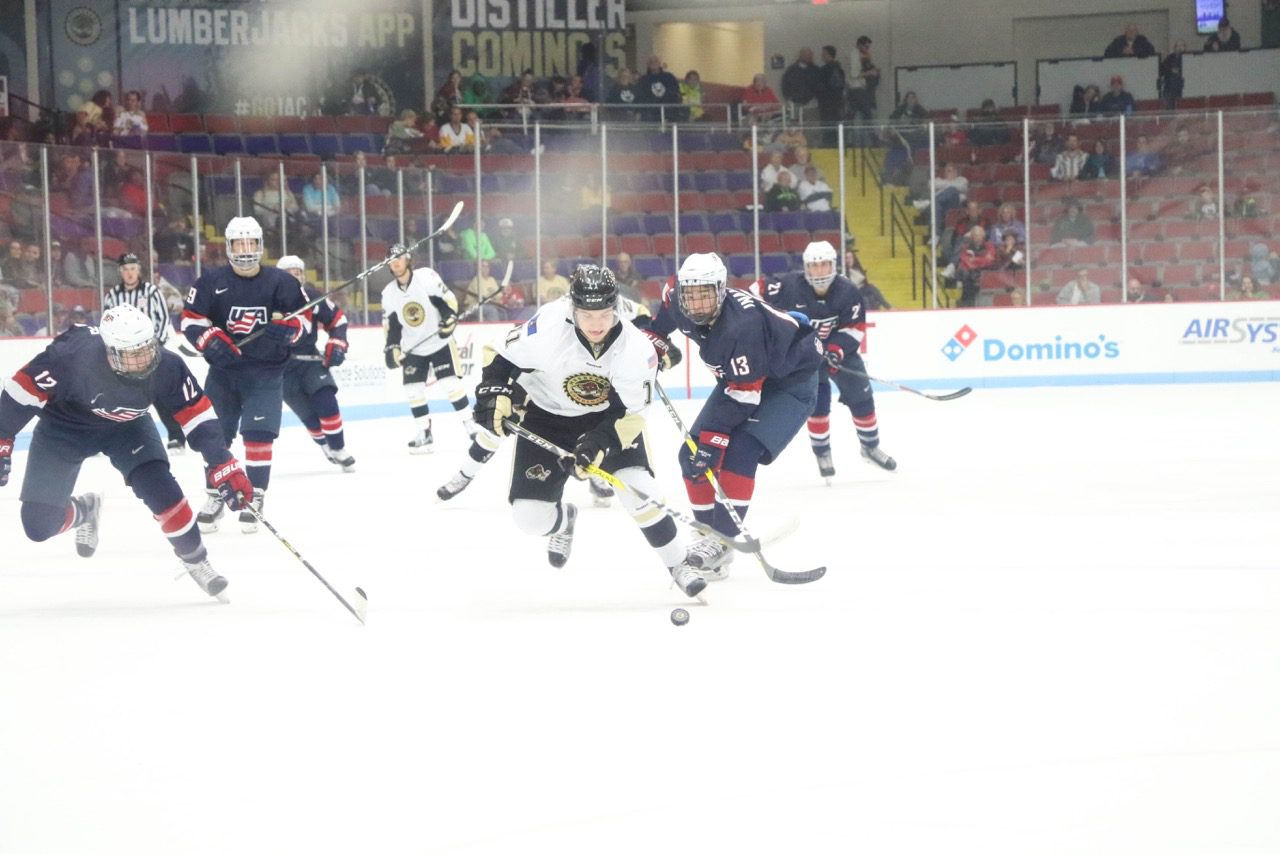 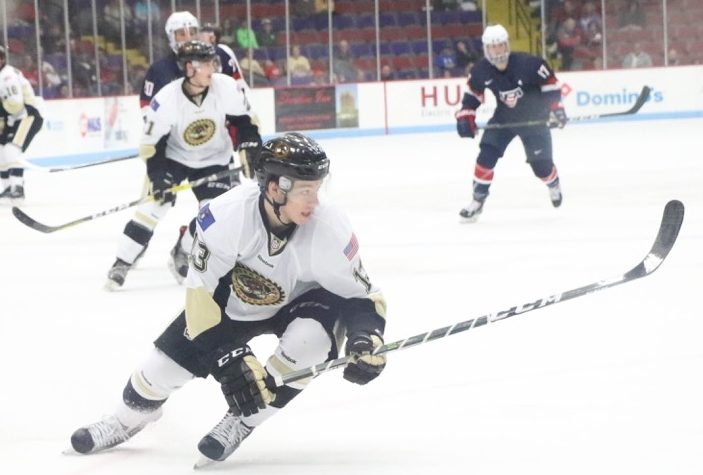 Collin Adams glides into the zone on attack for Muskegon. Photo/Joe Lane

No. 11 Keeghan Howdeshell controls the puck down the ice for Muskegon. Photo/Joe Lane 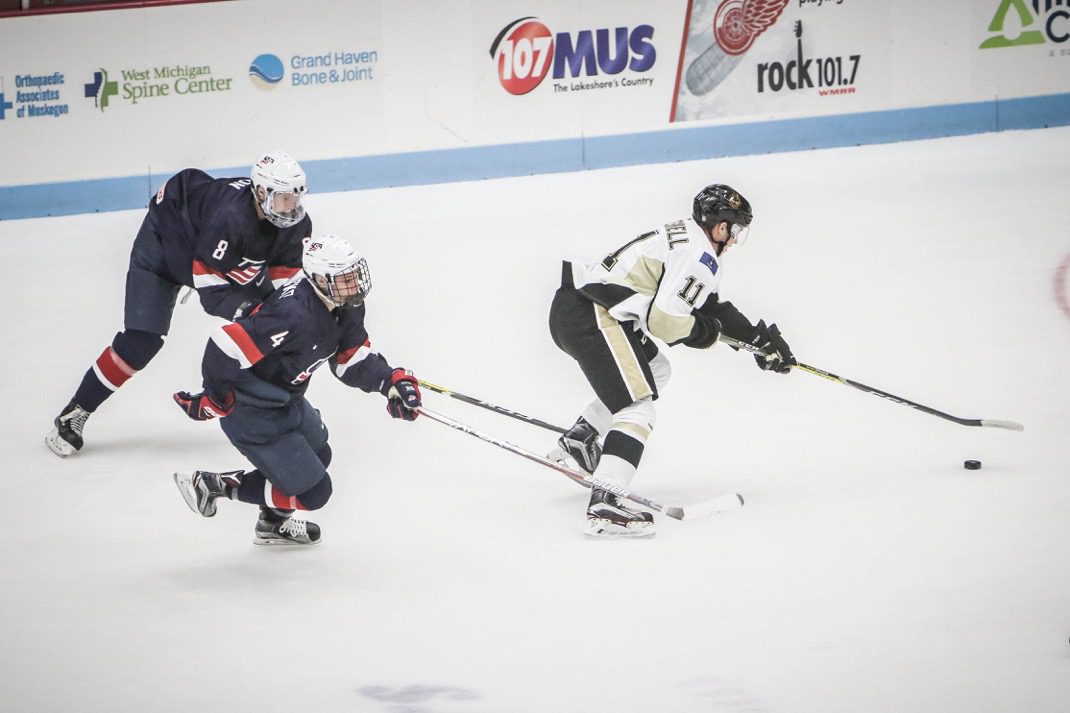 Keeghan Howdeshell gets the edge on Team USA defenders No. 4 Logan Hutsko and No. 8 Max Godon. Photo/Joe Lane