That’s when standout senior David Thompson was moved from quarterback to running back, and offensive linemen Shane Goebel was

cleared to return to action from a broken hand, and was inserted as a blocking fullback.

Since then, the Bulldogs’ rushing attack has been vicious, and more importantly, they haven’t lost.

That trend continued for Ravenna in the opening round of the Division 6 playoffs on Friday. Thompson, running behind Goebel and an outstanding offensive line, rushed for 323 yards and four touchdowns in a 42-21victory over Lakeview.

The Bulldogs, who improved to 8-2 this season, advance to host Kent City in next week’s district championship game. Kent City edged Montague in a one-point thriller on Friday. 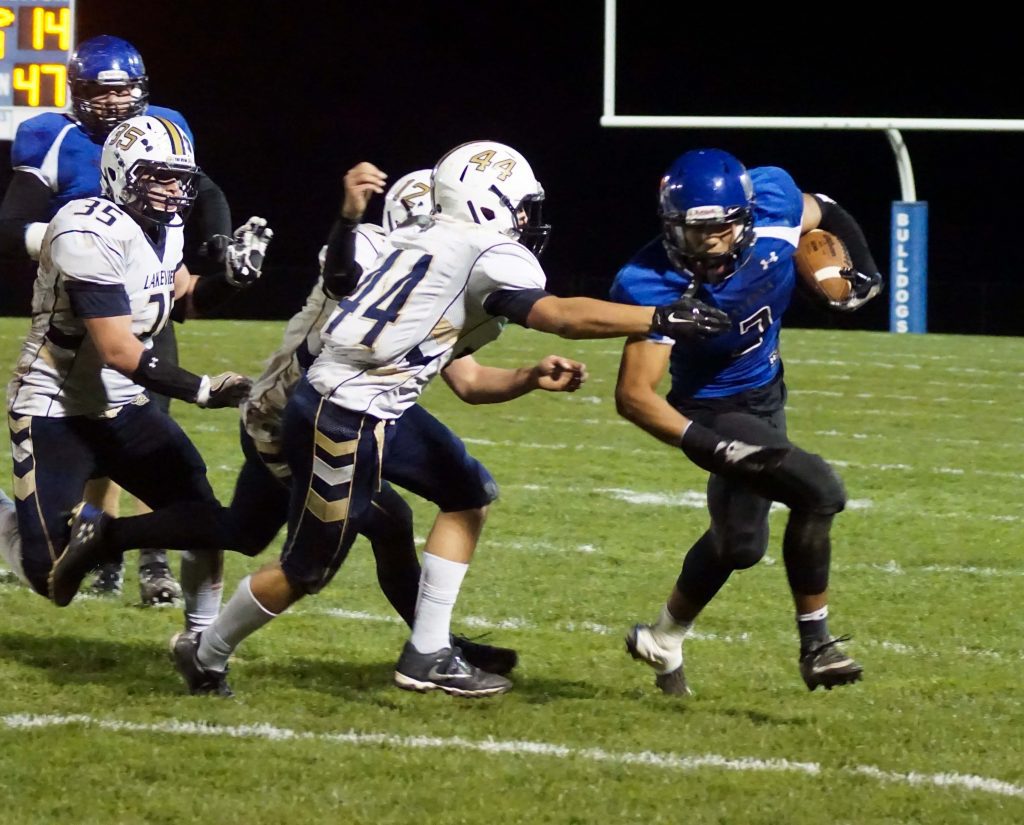 David Thompson finds the outside edge around Lakeview’s No. 44 Andrew Nummer. Photo/Leo Valdez

Ravenna coach David Smith said he’ll push for the game to be held next Saturday, but the date and time is yet to be determined.

Thompson had five touchdowns overall, with four on the ground and a 25-yard scoring reception. He also snagged one of Ravenna’s four interceptions.

“The line was amazing tonight,” Thompson said. “They allowed me to make the cuts that I can make and I hope they continue to do that. I believe they will.”

Thompson scored the first two times he touched the ball. He found a nice gap off right tackle Caleb McCullough on his opening 80-yard scamper, and then one-upped himself on his second carry when he broke a tackle and raced 91 yards to the end zone.

“When you see two touches and two touchdowns, that tells you the line is doing a heck of a job opening holes and our lead backs did their job as well,” Smith said. “David’s a home run hitter, but when the holes are that big, David has the talent to get to that next level and make things happen.” 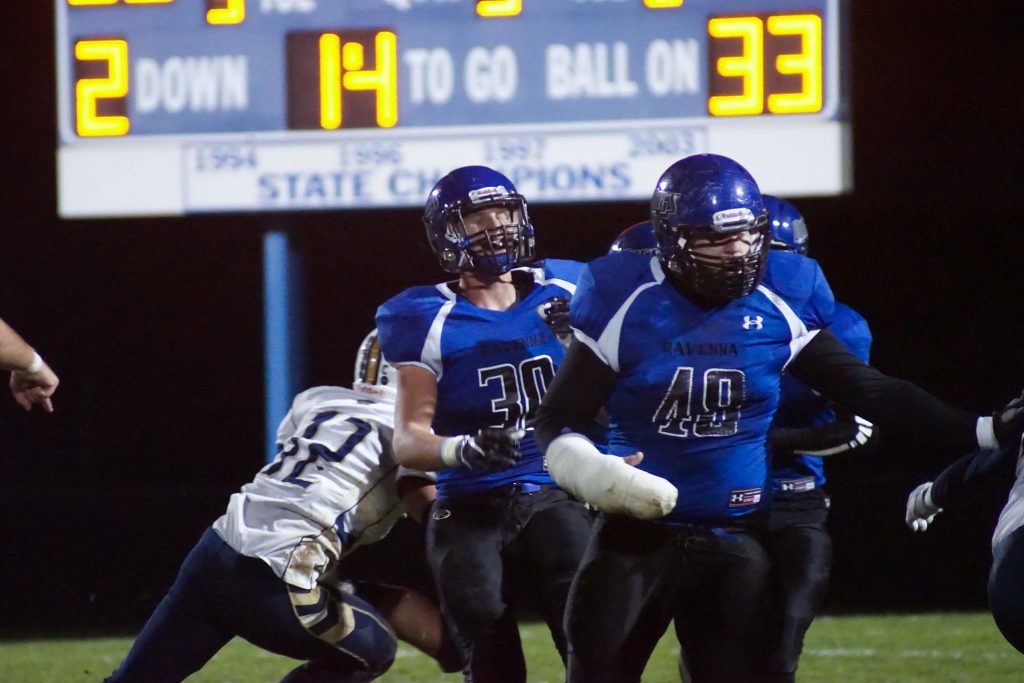 Ravenna’s No. 30 Tierstyn McBride and No. 48 Shane Goebel react as the play progresses. Photo/Leo Valdez

Thompson definitely made things happen on his third scoring run, a dazzling 76-yard display that saw him break at least five tackles by shifting and spinning repeatedly on a dime.

The real dagger for Lakeview came with 3:34 left in the first half. The Wildcats had trimmed their deficit to 21-7, but Ravenna answered. On fourth down, Ravenna quarterback Camron Passenier connected with Thompson for a 25-yard score, after he slipped wide open out of a trips formation.

Lakeview fought back in the third quarter, scoring a 67-yard screen pass to senior Zachary Hamlin to cut Ravenna’s lead to 28-14.

But the Wildcats still had no solution for Thompson, whose final touchdown – a 31-yard cut-and-sprint around right end, put the Bulldogs comfortably ahead.

Goebel put the finishing touches on the victory, scoring on a one-yard plunge early in the fourth quarter for a 42-14 advantage. 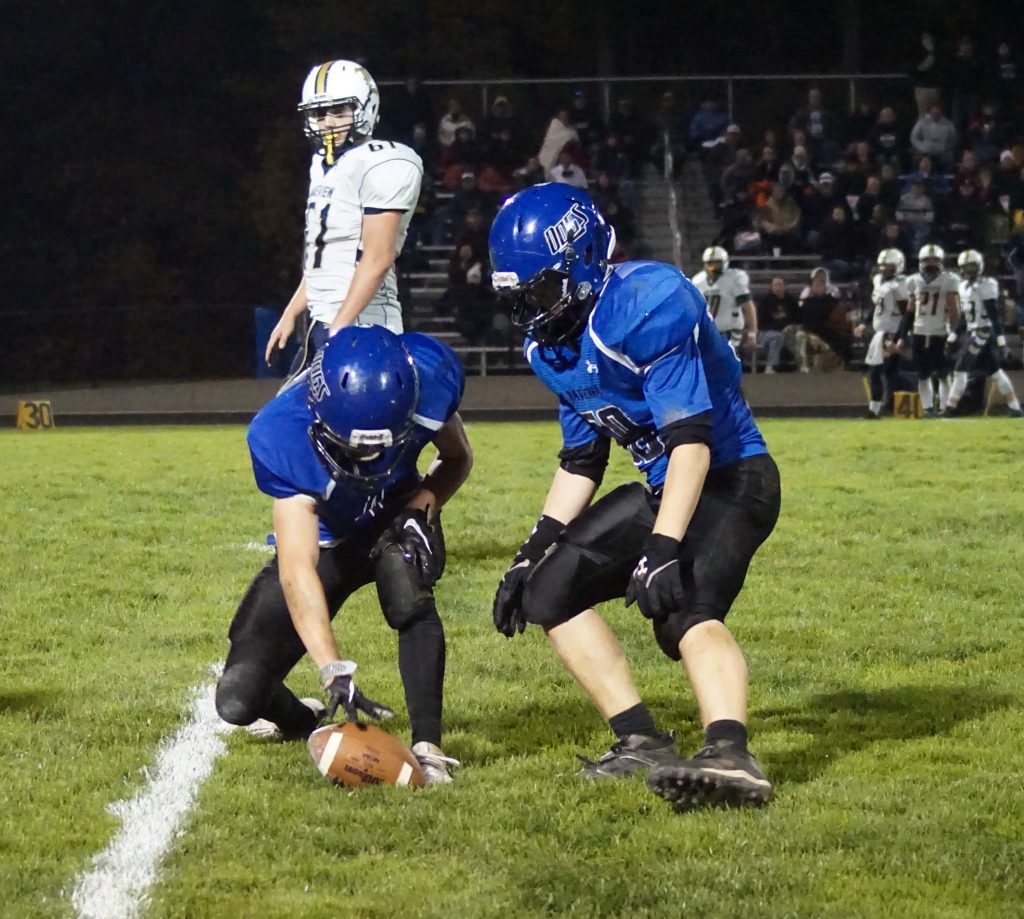 No. 4 Matt Russell reaches to down the ball on the Ravenna punt with Zach McCleary looking. Photo/Leo Valdez

“We were missing that one big block coming out of the backfield and Shane brings that,” Smith said. “He’s 260 pounds coming at you, and not many high school kids want to stand in front of that.

“If you block hard, I’m more than happy to give my fullback carries down there (at the goal line).”

Ravenna finished with 423 yards on the ground.

Smith said he expects a “hell of a dog fight” with Kent City looming. The two squads met in Week 1, with Ravenna winning 28-8. 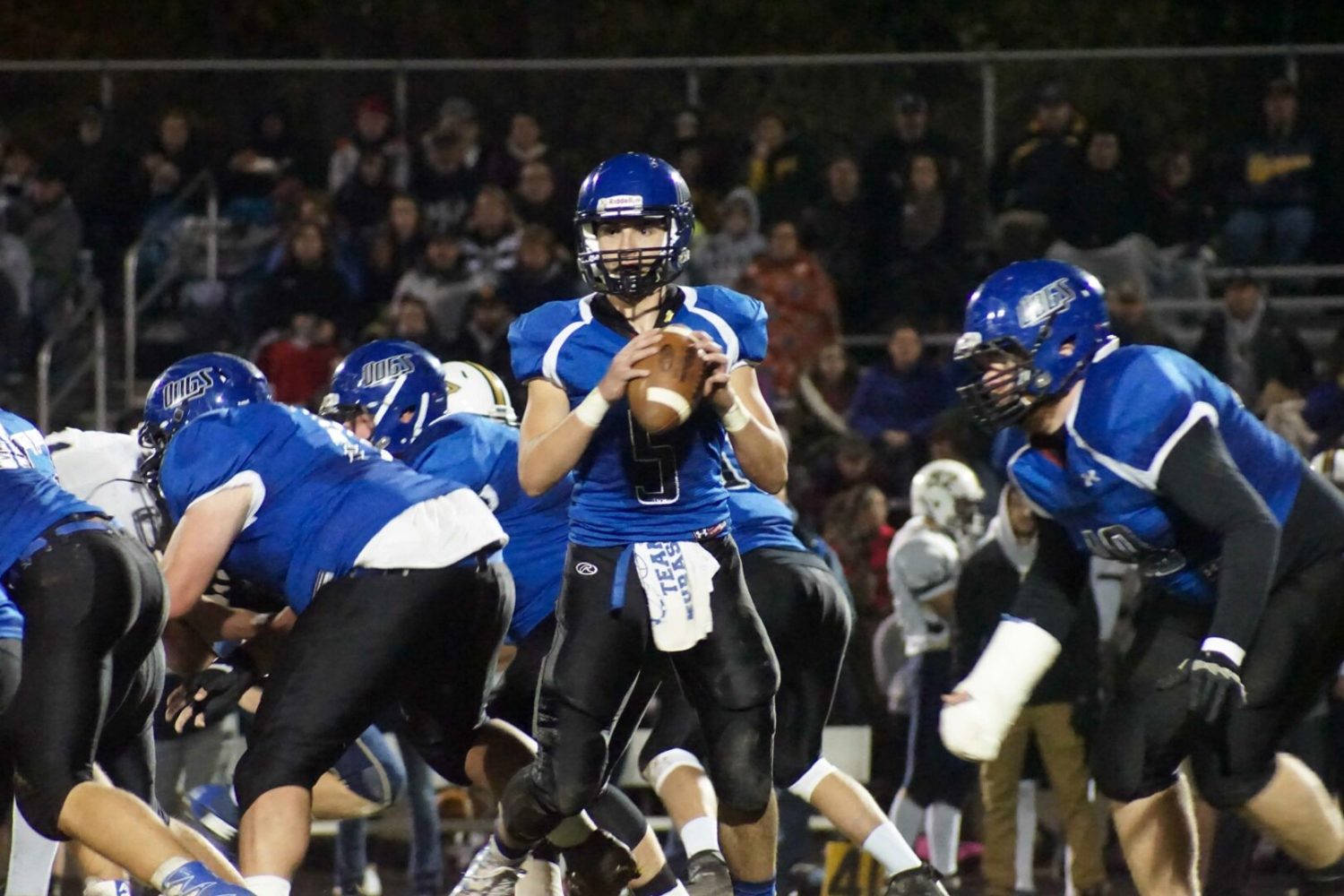 Camron Passenier looks to the outside on the Ravenna passing play. Photo/Leo Valdez 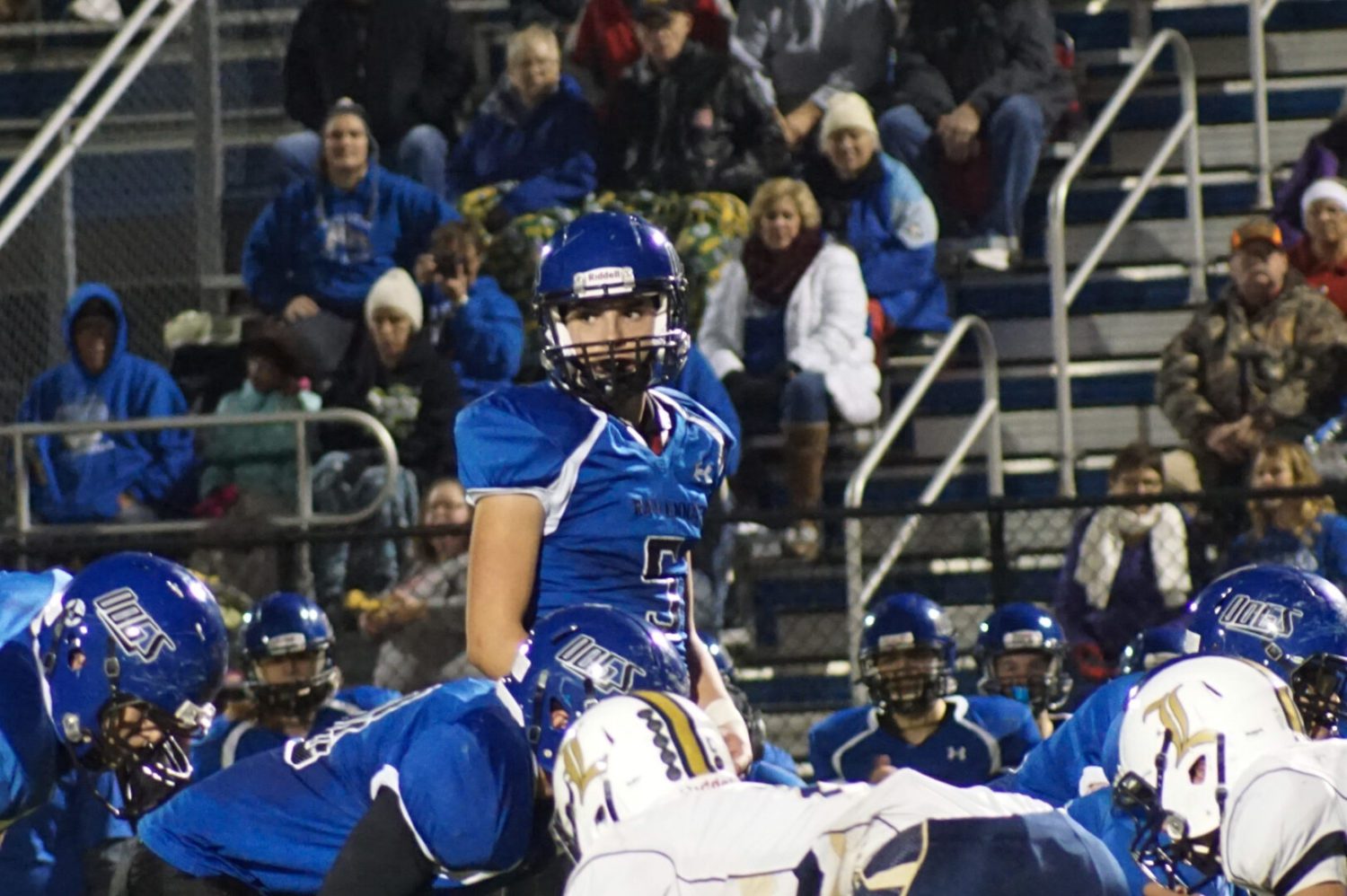 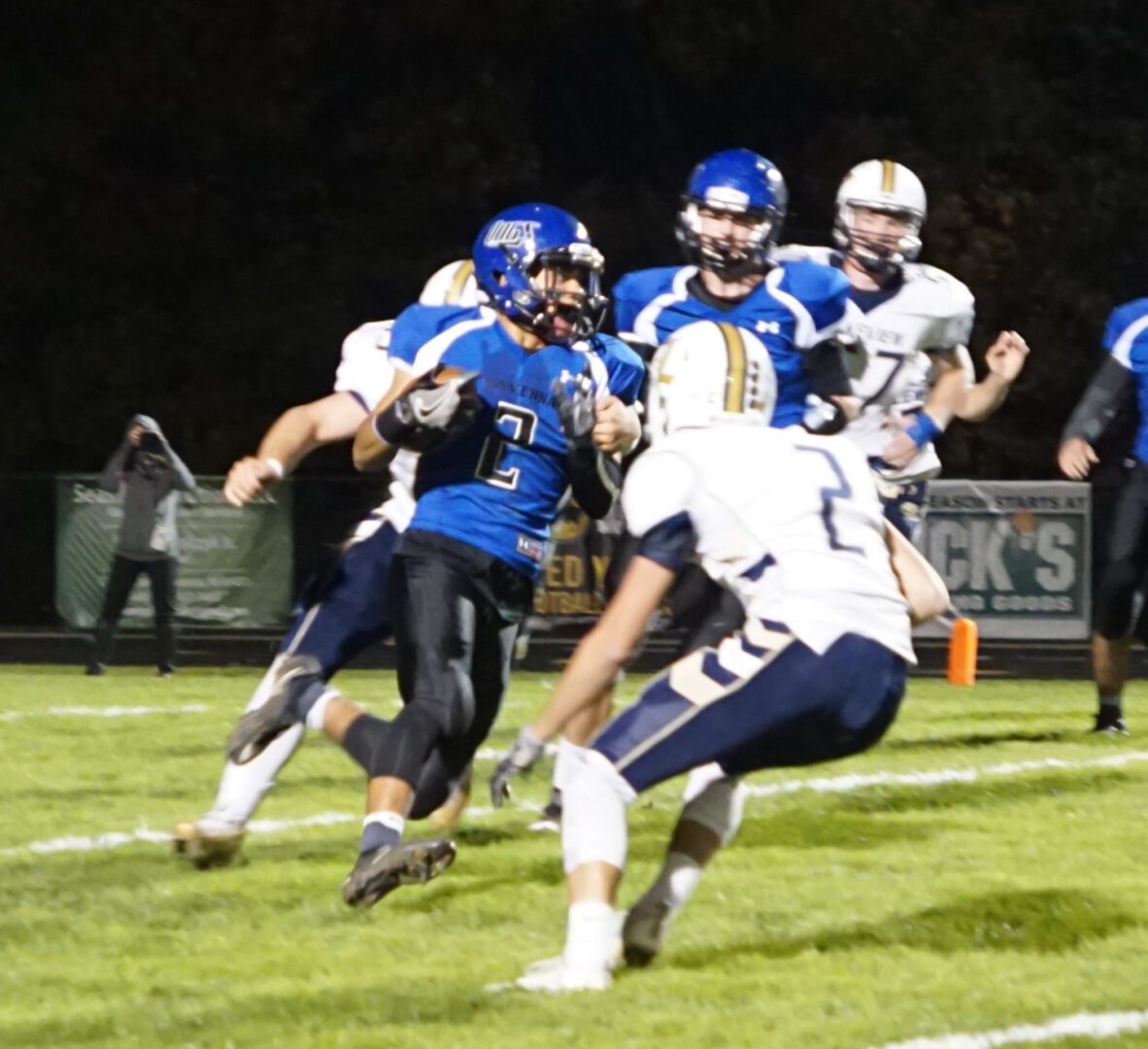