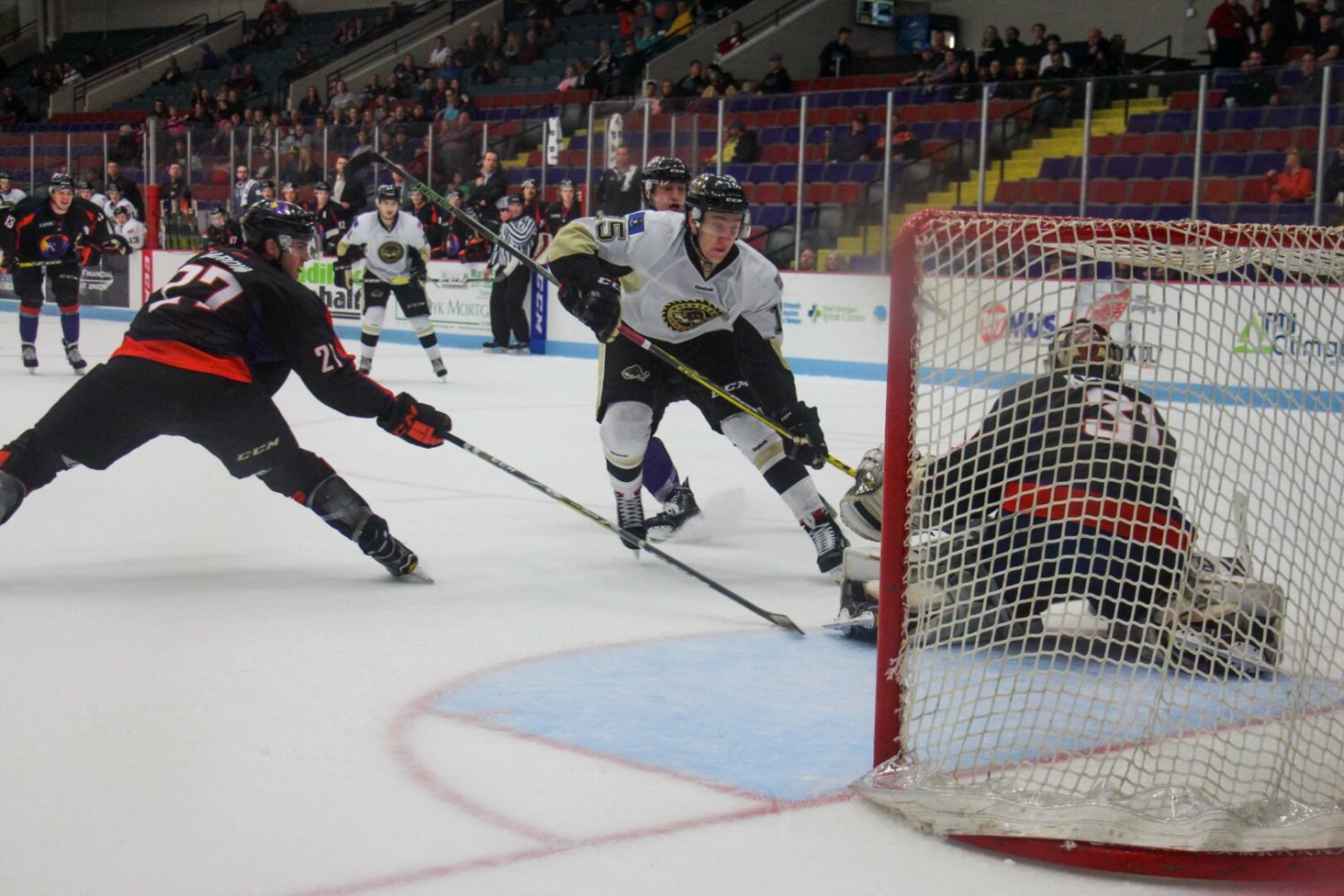 MUSKEGON – Apparently a few good fights bring out the best in the Muskegon Lumberjacks.

But the Jacks saved their best for very late in the game on Saturday, when it was too late to make any sort of comeback.

The Lumberjacks dropped an ugly 7-4 decision to the Youngstown Phantoms at L.C. Walker Arena in front of 1,624 fans.

It was the second defeat in two nights for Muskegon, which lost 3-1 to Youngstown on Friday. The two-game losing streak follows a four-game winning streak. 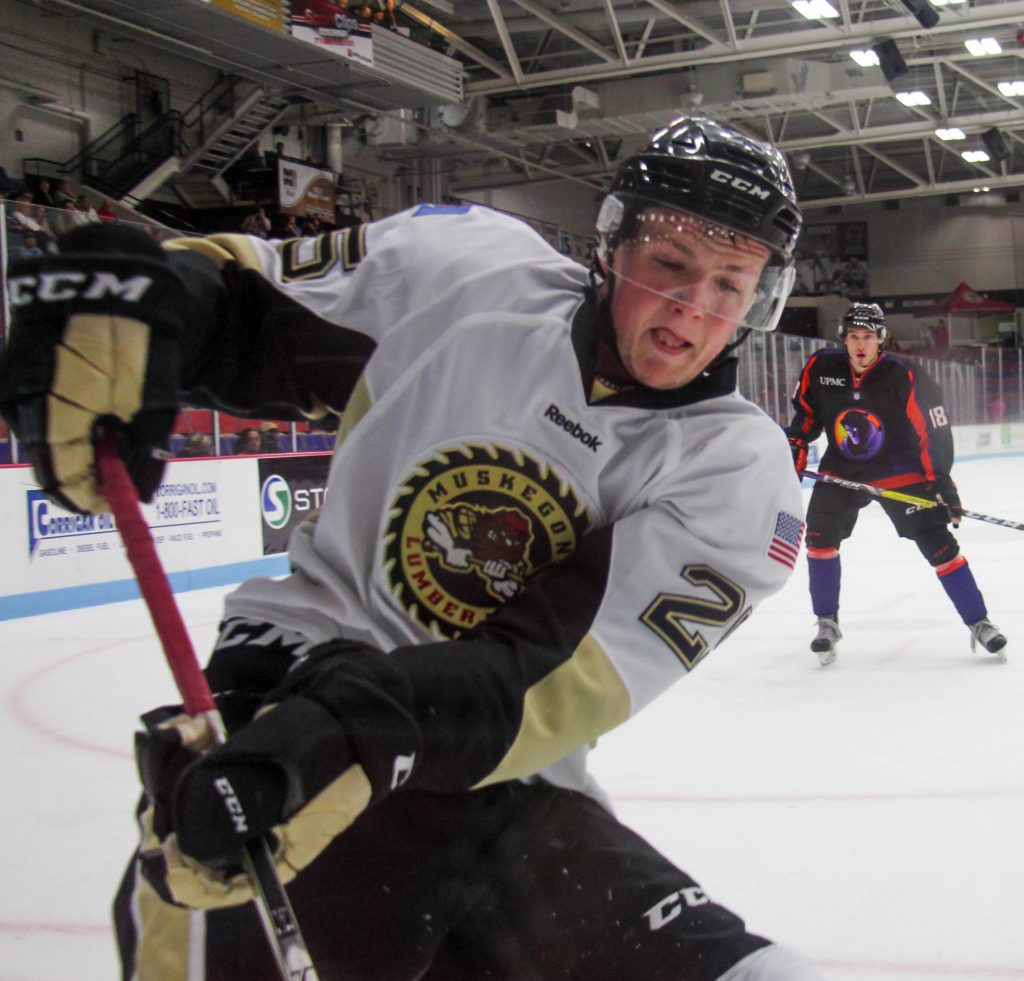 The Lumberjacks are now 4-3 on the season. They will return to action next Friday with a game in Bloomington, Illinois. Their next home game is Oct. 28 against Sioux Falls.

Saturday’s defeat could have been even worse, but the Lumberjacks scored three of the four goals in the third period to make the score a little more respectable.

The Jacks also gave the crowd something to yell about in the third period by engaging in three spirited fights with the Phantoms, and appearing to have the slight advantage in each skirmish.

But Lumberjacks Coach John LaFontaine wasn’t interested in the outcomes of the fights. He simply noted that Youngstown is a very good team, and said the Jacks need to improve a lot.

“First of all that’s a good team, a very good team, and you can’t go down by two or three goals to start the game,” said LaFontaine, whose team lost despite outshooting Youngstown 33-29. 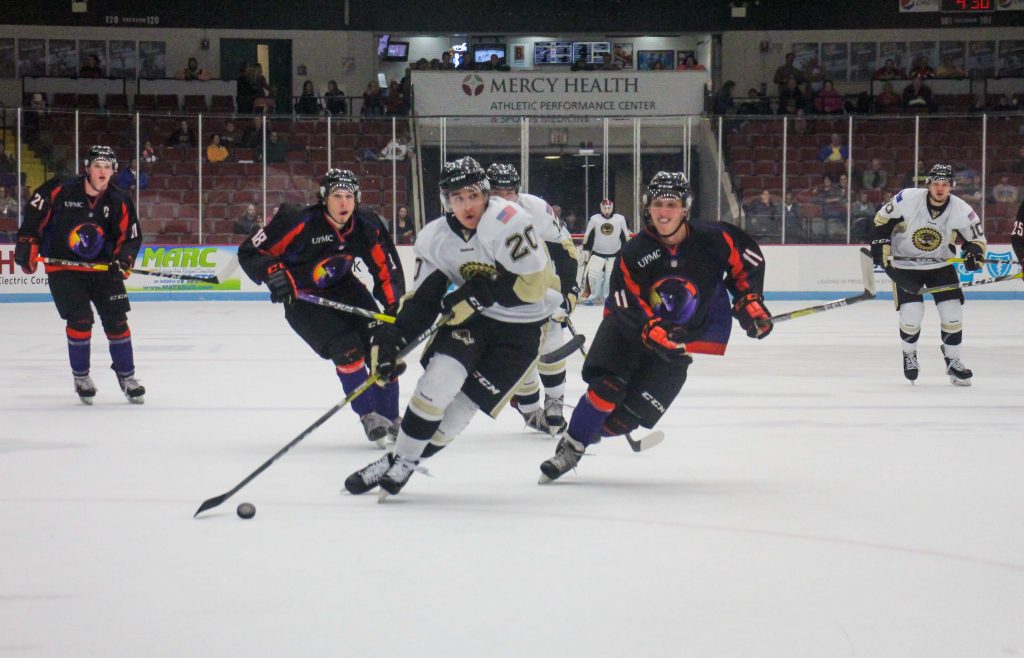 Muskegon’s Koby Bender controls the puck before he scores his first goal of the season. Photo/Jason Goorman

“That’s a very tough team to come back against. Both nights our first period wasn’t very good. I thought we managed the puck a little better (than Friday), but at times we struggled.”

The Lumberjacks struggled on special teams on Saturday.

Youngstown scored two goals on four power plays, both coming in the first period to put the visitors in command. Muskegon was 0-for-3 on the power play.

“Tonight we had more power play shots then we usually had in any previous game, but we didn’t get production,” LaFontaine said.

Youngstown’s Alex Esposito did much of the damage against the Lumberjacks, registering a three-goal hat trick.

He opened the scoring 5:15 in the first period on a power play goal. Youngstown’s Brett Mutag added another power play tally about four minutes later, and the Phantoms skated off with a 2-0 lead after one period. 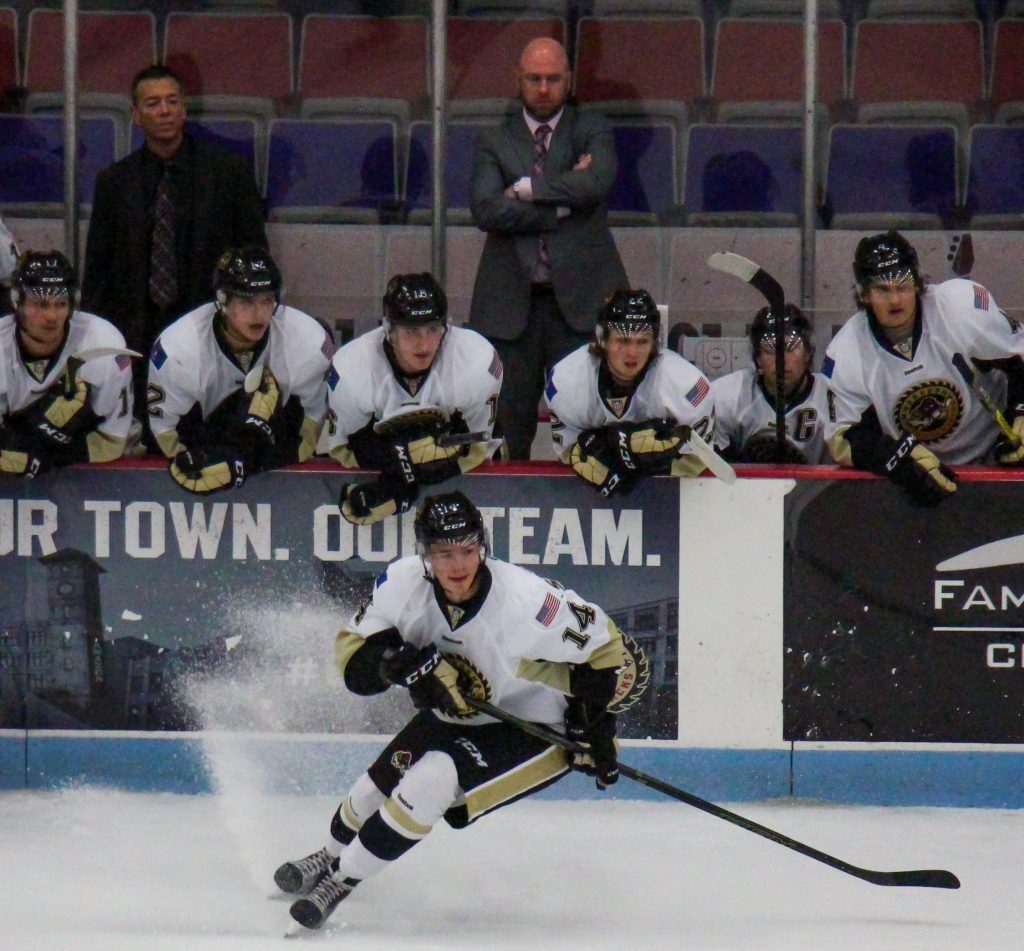 Andrei Svechnikov makes a cut in front of the Muskegon bench. Photo/Jason Goorman.

Muskegon’s Matt Steeves scored at 13:56 of the second period, with assists from Logan Drevitch and Bo Hanson, but Youngstown led 6-1 after two periods.

The Jacks got third period goals from Garrett Van Whye at 12:59 (assisted by Jordan Timmons and Zach Berzolla), Koby Bonder at 15:25 (assist by Timmons), and Timmons at 17:53 (assisted by Andrei Svechnikov and Jachym Kondelik).

“The guys didn’t quit, they kept working and battling and got something out of the game,” LaFontaine said. “Now we have to go back to work.”

Esposito completed his hat trick with a goal at 13:33 of the final period.