The Crusaders needed every one of those minutes Tuesday to squeak out an intense 1-0 victory over Buckley in the Division 4 regional semifinals at Western Michigan Christian’s soccer field. 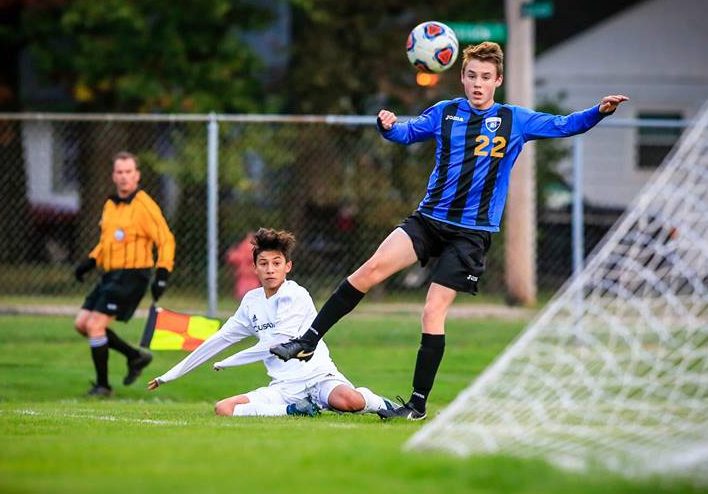 The winning goal came when an MCC pass hit a Buckley defender, who deflected the ball into his own goal with 39 seconds left in the game.

Muskegon Catholic, now 11-7-4 on the season, will continue its Cinderella run in the regional finals on Thursday against Grand Rapids Covenant Christian. The game will be at 6 p.m. at the WMC soccer facility.

“At the beginning of our season, we thought we could make the state finals, then we lost three seniors before the season began and that kind of changed up our attitude a little bit,” said MCC Coach Bill Moulatsiotis, whose team upset state-ranked North Muskegon in last week’s district’s semifinals.

“Then as we started to put some things together, we thought maybe we could get out of districts. And if we could do that who knows what could happen, because our district is so hard.”

MCC appeared to take the lead over Buckley with seven seconds remaining in the first half.

Jose Zambrano was awarded a free kick to the right of Buckley’s goalkeeper, and blasted a shot into the bottom right corner of the goal.

But after some confusion and deliberation, the game officials disallowed the goal due to an issue with the clock. The clock on the scoreboard had stopped and they could not determine whether there was time remaining when the ball crossed the goal line.

The action became intense and physical in the second half.

Over the course of 17 minutes, a total of six yellow infraction cards were assessed between the teams.

Two of those cards were issued against the same Buckley player, resulting in a red card and an ejection, forcing the Bears to play a man down for the last 14:10 of the match.

“Any time in soccer a guy gets a red card, it changes the whole dynamic of the game and that really gave us a boost and helped us out,” Moulatsiotis said.

After multiple close calls, with shots hitting the post and crossbar, the Crusaders finally broke through with just 39 seconds remaining.

Zambrano gained possession on the left wing and attempted a centering pass. The ball hit a Buckley defender and ended up in the back of his own goal.

“It was a quality win for us and we’re happy about it,” Moulatsiotis said. “I don’t think we’ve played our best soccer yet. We’re still searching for that.

“I saw flashes of it throughout the season, but we’re still grasping for that. Our boys played well but they won it on grit and heart today. They didn’t win it on their A-game.”