NORTON SHORES – With their backs against the wall in their desperate hunt for a playoff berth, the Mona Shores Sailors picked up a convincing 48-21 victory on Friday night over Kenowa Hills in O-K

After starting the season 1-3, the Sailors are now 3-3 overall and 2-1 in the conference. Six wins are needed to make the postseason playoffs, which means

Mona Shores must win all of its remaining games.

Quarterback Tristan Robbins and running back Marcus Collins did their best to keep the dream alive against Kenowa Hills.

Collins finished with 129 yards rushing and four touchdowns on 24 carries, while Robbins completed all six of his passes for 193 yards and three touchdowns.

“We started out really slow this season,” Collins said. “Our first game we thought we were the old
Mona Shores that didn’t have to worry about other teams. I think after being 1-3 we realized if we didn’t get it working, we were going to miss the playoffs.

“We don’t want to be known as the team that missed the playoffs, so every game we come in thinking of it as our backs against the wall.” 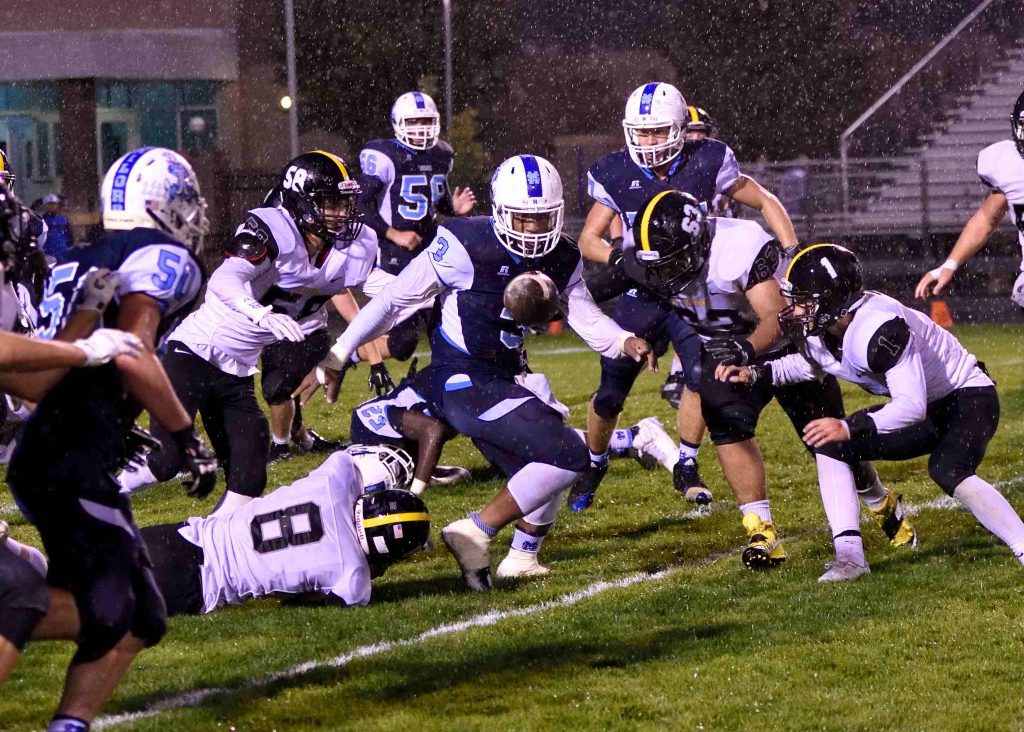 The weather caused several fumbles on the night. (photo/Eric Sturr)

The Sailors scored on their first possession, grabbing a 7-0 lead with 6:17 left in the first quarter. Collins capped off the 12-play, 68-yard drive with a five-yard touchdown run.

Mona Shores extended its lead to 14-0 when Collins scored from 13 yards out with 9:25 left in the second quarter.

The Knights cut their deficit to 14-7 in the final minute of the first half on a six-yard touchdown run by Benito Hernandez.

But the Sailors weren’t done. Instead of kneeling on the ball with 36.3 seconds left, Robbins found Emari Hardy on a play action pass for a 67-yard touchdown that gave the Sailors a 21-7 halftime lead.

After halftime, Kenowa Hills’ Hernandez broke an 80-yard touchdown run to cut the Sailor lead to 21-14.

On the ensuing kickoff, the Knights bounced the kick off the front line of the Mona Shores return team, but didn’t come up with the ball, allowing Mona Shores to start from the Kenowa Hills 39-yard line.

Mona Shores scored on a six-play drive, capped off by a Collins 3-yard run that gave the Sailors a 28-14 edge. 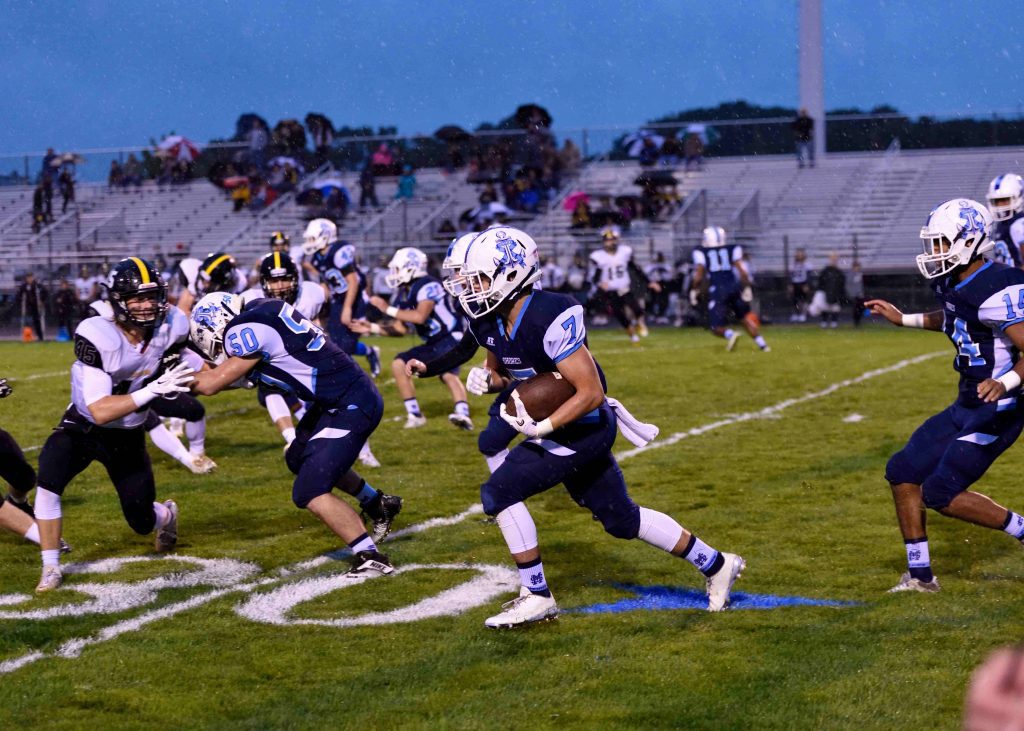 Kenowa Hills pulled within seven points on its ensuing possession before a Collins touchdown with 41.5 seconds left in the third quarter made the score 35-21.

The following kickoff was fumbled by Kenowa Hills and recovered by the Sailor at the Knights’ 33-yard line.

On the first play of the possession, Robbins dropped back and found KeyShawn Summerville for a 33-yard touchdown pass to increase the Sailor lead to 41-21 at the end of the third quarter.

The final score of the night was a 39-yard touchdown pass from Robbins to Hardy.

“Those three games we lost, our kids were in it and we had opportunities to win but didn’t,” said Sailor head coach Matt Koziak. “Our kids have fought back and I think we’ve continued to get better.

“Hopefully we’re starting to click at the right time, and I know we have Muskegon ahead, which will be a tough test.”

Mona Shores will host Grand Rapids Union next Friday in another must win situation, before facing Muskegon in Week 8. 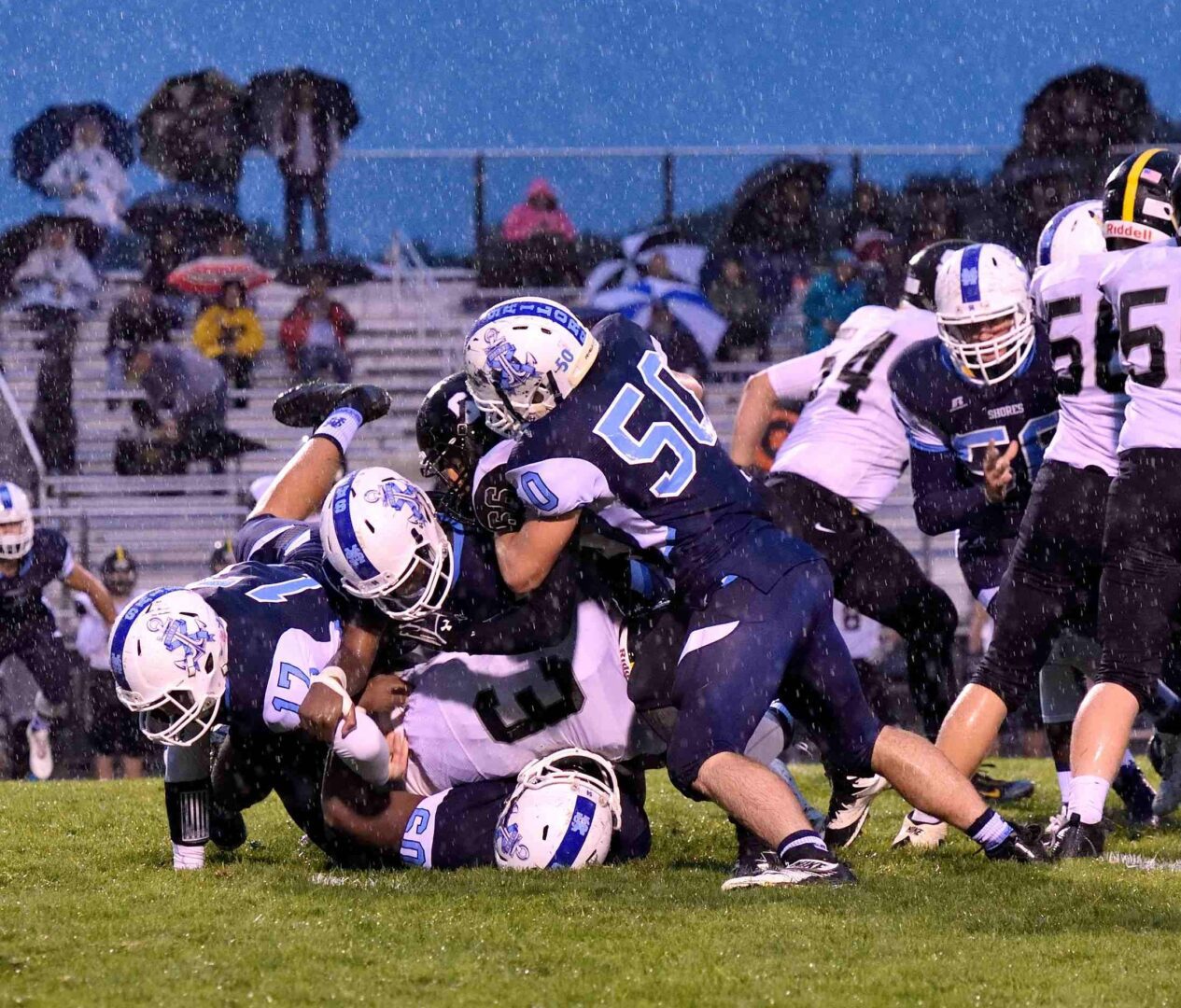