Crusader defenders may be small, but they don’t give up many yards or points

MUSKEGON — You can’t block what you can’t touch.

“Speed is the biggest strength on this defense,” said Muskegon Catholic third-year head coach Steve Czerwon. “We’ve got athletes all over. As a collective group, they can really chase down the football.” 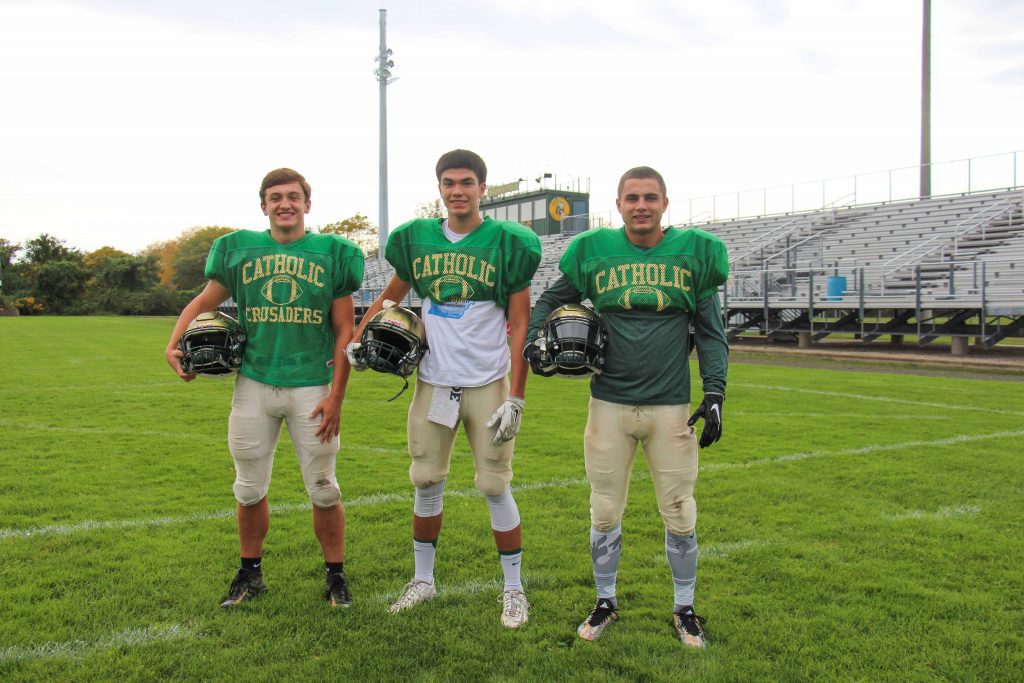 Despite not featuring a player over 200 pounds on their starting unit, the Crusaders are turning in one of the finest defensive seasons in program history.

Through the Crusaders’ 8-0 start, they have allowed opponents to score only 51 points, and none in the first quarter. The have only allowed 1,011 total yards, or an average of 126 per game. The Crusaders are outgaining their opponents nearly 3-to-1.

Of the MCC teams that have played 10 or more games in a season, eight have held opponents to fewer than 100 total points. The 2016 squad looks like it will be the ninth.

“We really pride ourselves on bringing everyone to the ball,” said senior middle linebacker Andrew Schulte, who leads the team with 47 tackles, including four for losses. “This group can make plays in the backfield, and chase down running backs sideline-to-sideline.”

Schulte said he knew the defense would be special following the first few series against Oakridge in the season opener.

“That very first game, the first couple of drives, we stopped them and we got an interception,” he said. “It was a lot different from a year ago, when we really struggled against (Oakridge).

“I believe this group of linebackers has stepped it up a lot. We really worked hard throughout the summer and focused on getting better at scraping to the ball and making plays in the backfield.”

On the defensive line, MCC has had nine different players record at least one sack. Czerwon said the leader of the group is nose guard Jacob Martinez.

“We line up in a 3-3 stack defense, and we got Jacob in the middle,” he said. “He’s about 6-foot, 170 pounds, but he uses his quickness and has really proven to be disruptive out there.”

With more teams going to spread offenses and wider splits on the offensive line, players like Martinez are not necessarily slowed down by bigger linemen, according to Czerwon.

“Those spread teams need to be able to pass protect, but Jacob is able to use his quickness to get around those big guys,” he said. “A lot of times, he’s going against kids 200 pounds heavier than him. His first step is really quick. He ran track with us this past spring and really improved his speed.”

In the secondary, MCC has plenty of playmakers, including speedy cornerback LaTommy Scott, physical safety Logan Helton and Walker Christoffersen, who excels at both stopping the run and in coverage.

Those three, by the way, are also the Crusaders’ three standout running backs on offense.

“Walker really knows how to fill the gaps,” Schulte said. “Although he was All-State last year, he’s improved by leaps and bounds. He’s saved us a lot on ‘D’ by the big plays he’s been able to take away (from his coverage skills).”

Schulte said he’s been somewhat surprised at what the Crusaders have accomplished this fall. They haven’t been seriously challenged through eight weeks of the season.

“It’s been difficult” not looking ahead to the playoffs, he said. “We’re know we’re going to make a run, but we look at it like we want to get as many home games as possible in the playoffs, so we can’t overlook anyone. We want to play our best at the end of the year.”

It’s not like the Crusaders have played a cupcake schedule, either. It’s just that their defense has been that dominant.

“The kids have just went about their business and got the job done, week after week.”

Fremont soccer team falls behind early, but roars back to tame Tigers