RAVENNA – After the excitement in the end zone died down from a fever pitch, Ravenna’s varsity football players took a knee in anticipation of a rousing postgame speech from head coach David Smith.

Smith couldn’t put it any better, so he remained speechless and just let his Bulldogs continue to celebrate a Homecoming game worth coming home for – a thrilling 29-28 West Michigan Conference victory over Whitehall.

The win improves Ravenna’s season record to 5-2 overall and 4-2 in league play.

The victory was a huge step forward for the resurgent Bulldogs, who limped to a 3-6 finish last fall, including a late-season 10-point loss to Whitehall. They are now one win away from clinching a postseason playoff berth.

“I’ve been up here four years,” Thompson said amidst the celebration. “We got to the playoffs my sophomore year but we’ve never beat a good team like this. This is what I live for — these big wins. I don’t care about the little wins.” 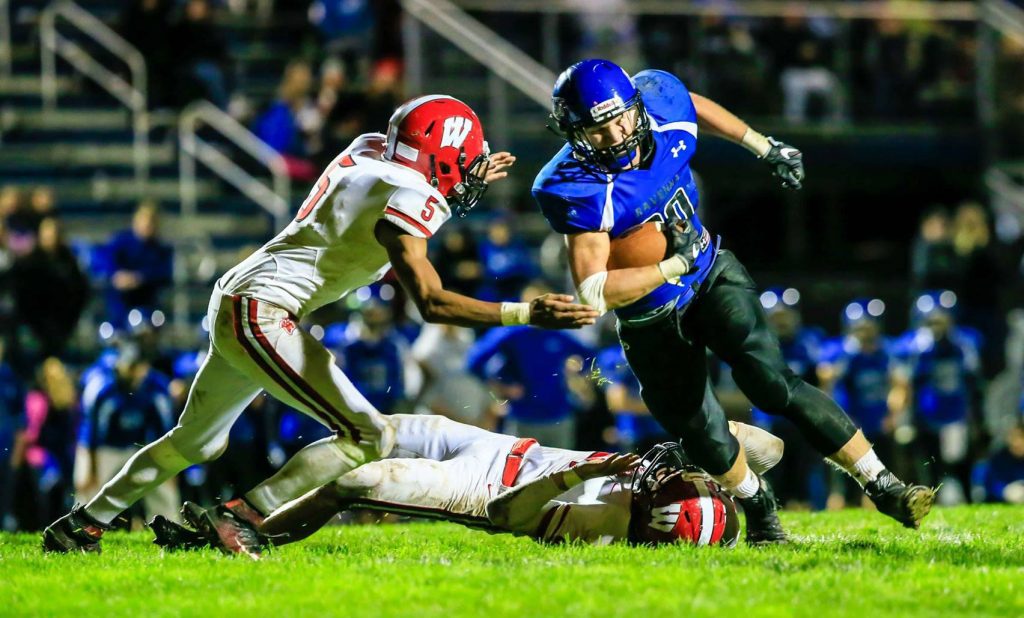 Ravenna’s Tierstyn McBride rushes around the edge to score the winning touchdown despite Whitehall’s No. 5 Justin Brown in the way. Photo/Tim Reilly

It was the second-consecutive one-point loss for Whitehall, following last week’s 27-26 heartbreaker to Oakridge. In a season that started with four straight wins, Whitehall has now lost three in a row and sits at 4-3 overall and 3-3 in the WMC.

That means the Vikings need wins in their last two games to make the playoffs.

Ravenna gave the Vikings a surprise at the start of the game, when Thompson was replaced at quarterback by junior left-hander Cameron Passenier.

“I found out Monday,” Thompson said of the switch. “We wanted to give Whitehall a surprise and they got one.”

Thompson lined up at running back and wide receiver instead, and made his presence felt at both positions, particularly on the Bulldogs’ game-winning drive in the fourth quarter.

Trailing 28-22 with under eight minutes to play, Thompson elevated over a Vikings’ defensive back and hauled in his third reception of the game, giving Ravenna a crucial 29-yard gain. 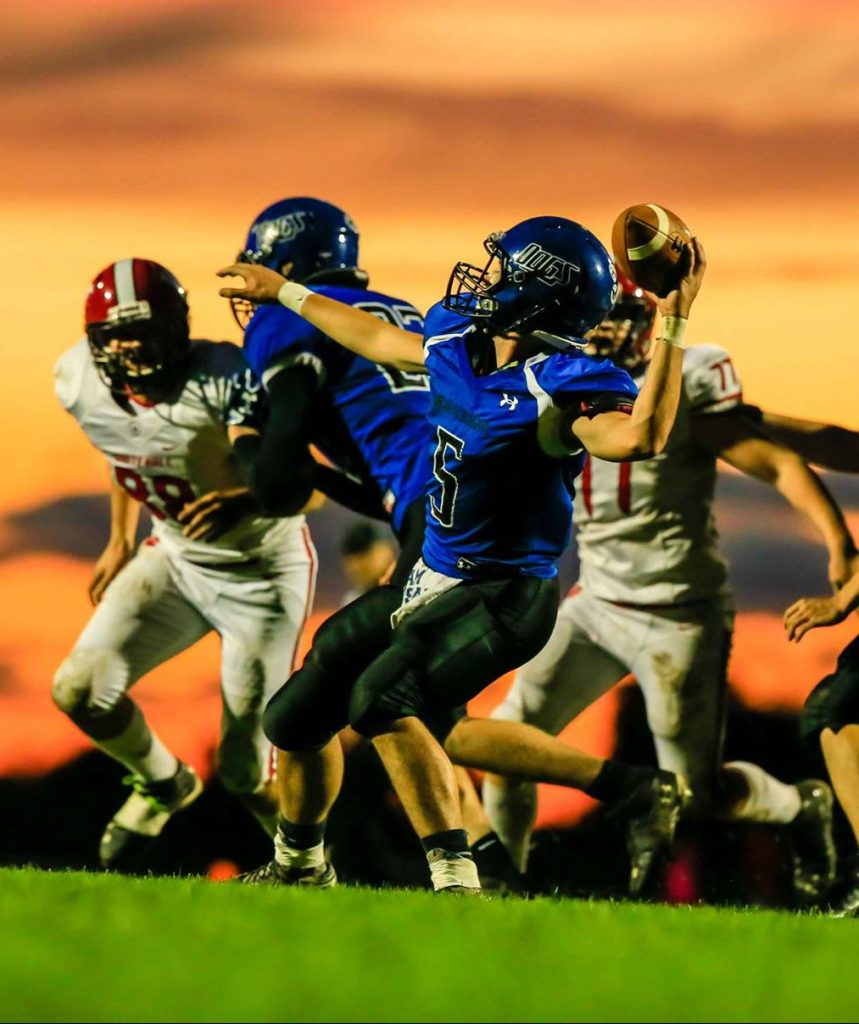 He finished with 109 receiving yards and 137 rushing yards

Ravenna kept the drive alive with several clutch runs, including an eight-yard scramble by Passenier that gave the Bulldogs a first down at the Whitehall 14. Three plays later, senior powerback Tierstyn McBride bulled through a hole off left guard, bounced off a tackler and surged into the end zone for the winning score.

It was McBride’s third touchdown of the game – each coming on the same play.

“We had it initially going to the power side, but (during the timeout) our coaches said, ‘You know what, they’re going to be anticipating that,’ so we flipped it to the other side,” McBride said.

Whitehall started deep in its own territory at the 12-yard line on its last drive and couldn’t get going. A fourth-and-long completion to sophomore Terrell Harris was four yards short of a first down, ending the Vikings’ chance for a go-ahead score.

It was a deflating finish for the Vikings, which rallied from a 22-7 second-quarter deficit to take a 28-22 lead with 8:59 left in the fourth quarter.

Ravenna got Thompson rolling early. He hauled in a 55-yard touchdown midway through the first quarter after a Whitehall defensive back went for the interception but whiffed. The ball ended up in Thompson’s hands and he trotted to the end zone.

McBride powered in for a pair of short runs near the goal line in the second quarter to give Ravenna its 22-7 advantage. But Whitehall quickly answered, needing just three plays to travel 56 yards and score a touchdown on a six-yard run by senior JoJo Dowdell.

Dowdell had 101 yards rushing on 18 carries and three touchdowns. Whitehall trailed 22-14 score at the half. 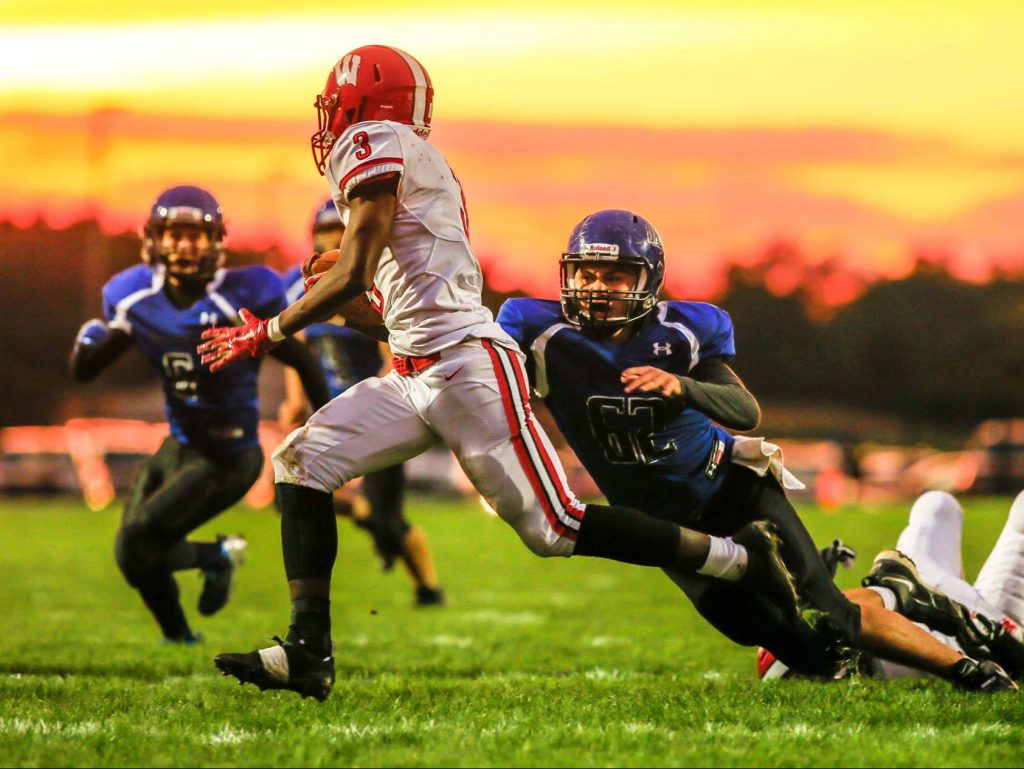 The Vikings were the only team to score in a penalty-plagued third quarter. An end-around to Harris picked up 46 yards and quarterback Casey Huizenga capped the Vikings’ drive with a 1-yard keeper to cut Ravenna’s lead to 22-20.

Harris was the game’s top rusher with 123 yards on 13 carries.

Harris was also huge in the passing game. He slipped wide open for a 57-yard gain early in the fourth quarter, setting up a three-yard touchdown run by Dowdell that gave Whitehall the lead.

But Ravenna and Thompson wouldn’t be denied and scored one more time to claim the victory.

“This team still hasn’t played up to our potential,” Thompson said. “It’s all on our line. Shane Goebel has come back from injury and he’s made a huge difference. He’s blocking everyone and does so much for our team.”

Ravenna’s run game was essentially bottled up in big losses to Montague and Oakridge earlier this season, but Friday they finished with 228 yards on the ground and 392 overall.

“This feels so good,” said Thompson, who was also crowned Homecoming king at halftime. “I love this team so much. They played their hearts out tonight.” 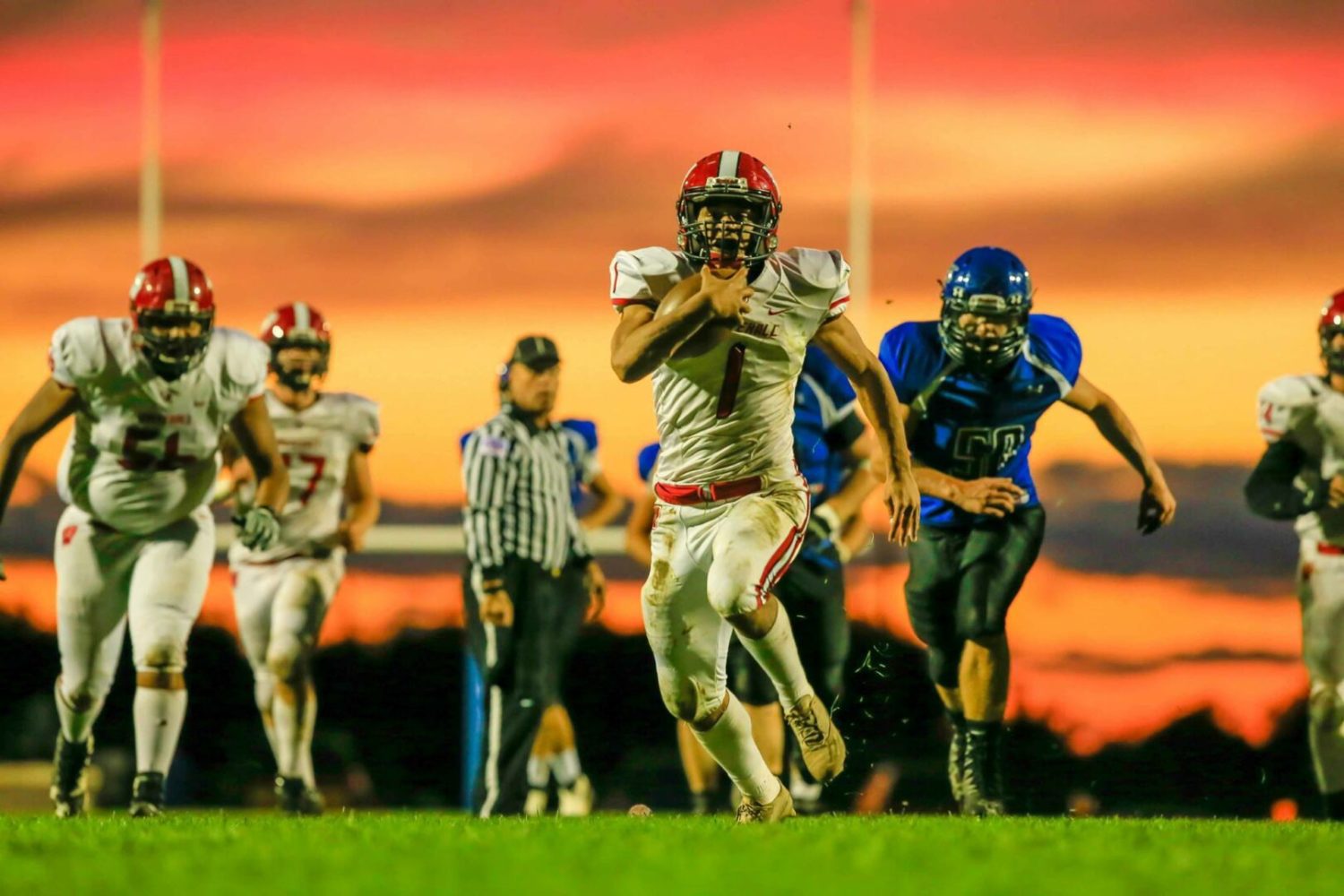 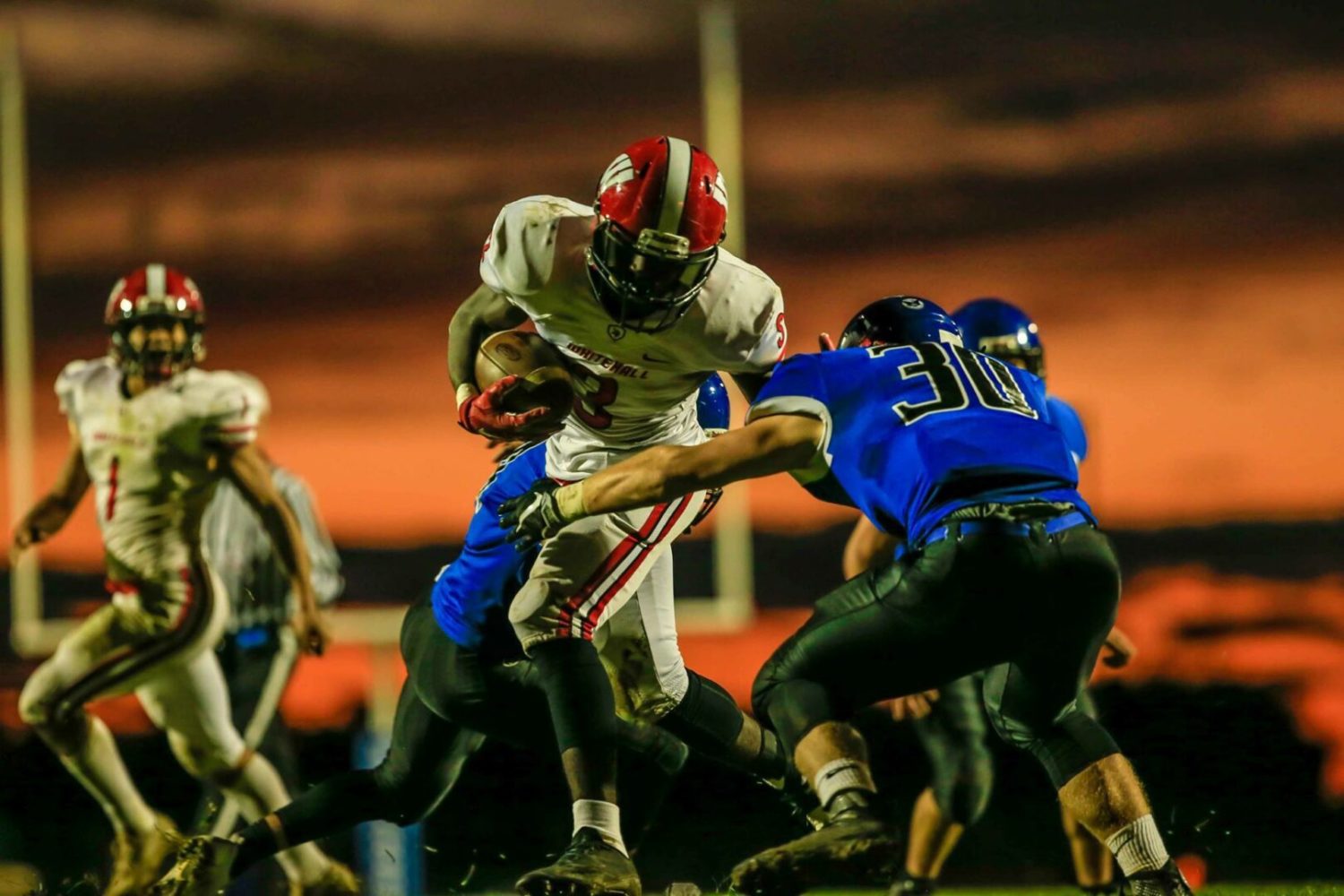 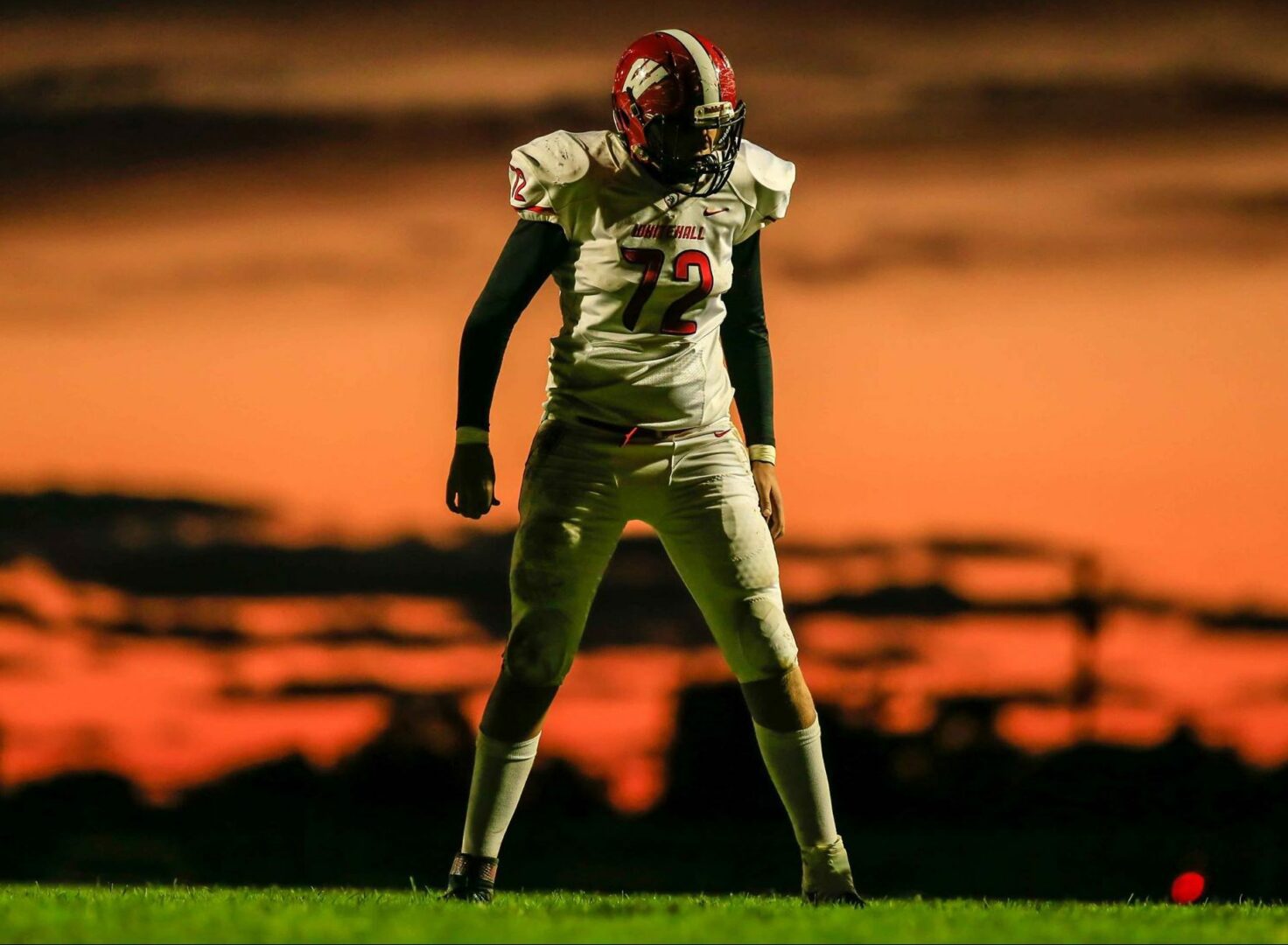 Whitehalls Brandon Rake gets ready for the next play while the sun sets with an incredible spectacle. Photo/Tim Reilly 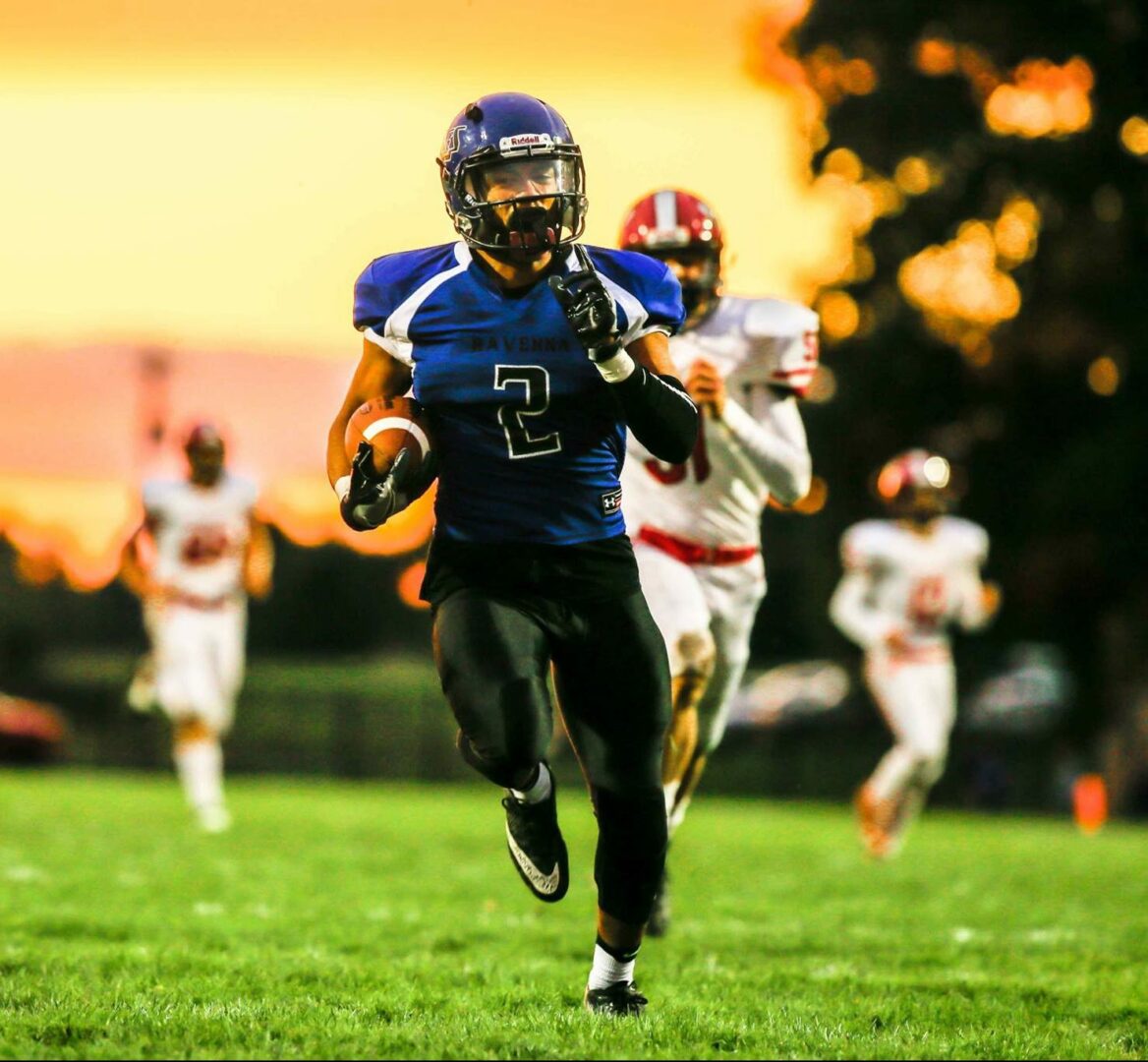