GRAND HAVEN – The successful Grand Haven volleyball program has a lot going for it: A knowledgeable and passionate coach, a winning tradition, and a

And then, of course, there’s the “Cole Connection.” 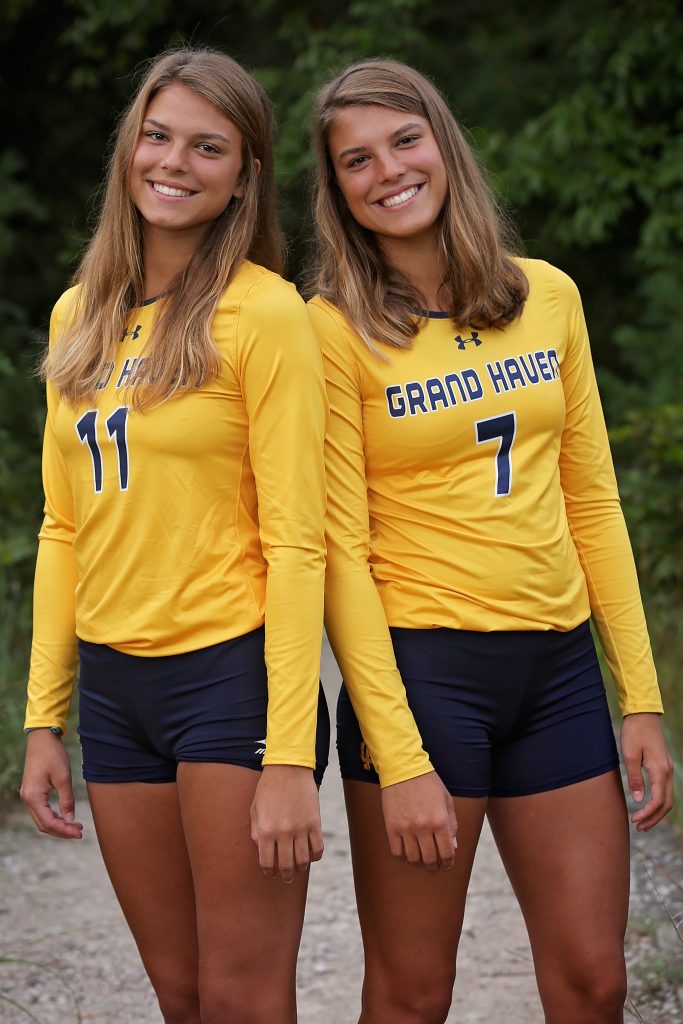 It started with Abby Cole, a star with the Grand Haven volleyball team who was runner-up for the Michigan Miss Volleyball award in 2012 and led the Bucs to the state semifinals.

Abby has gone on to become a high-profile standout with the University of Michigan volleyball team, but her two younger sisters, twins Katie Cole and Libby Cole, are carrying on the family tradition at Grand Haven.

Katie Cole, like her older sister, is a candidate for the Miss Volleyball Award, which goes to the top senior in the state. In September she was named one of the 10 finalists for the award, who are chosen by the Michigan Volleyball Coaches Association. Montague’s Emma Flagstead is also a finalist for the honor.

While they share the distinction of being elite volleyball players, Katie is a much different player than her older sister Abby.

Abby is much taller – 6-5 – and a powerful middle hitter who makes the booming shots that opponents can’t return. Katie, a 5-9 setter, is much more of a playmaker, with more than 3,000 assists in her varsity career.

She’s more often the one who sets her teammates up to make the big hits.

“Abby was the one you looked to for the big kill,” said Grand Haven volleyball coach Aaron Smaka. “Katie is the one who’s going to make all the decisions, and I think that’s a pretty significant difference.

“Katie runs the offense. She’s the quarterback of the team. She’s always talking and she’s really one of the most selfless players I’ve ever coached. She wants to do things to make the team better.

“She has learned scenarios where her hitters are getting hot, and she knows when to go to them. Her recognition of situations and her blocking – she has just learned to do things. And from an offensive standpoint she knows when it’s time to just go get it.”

Cole is surrounded by a lot of skilled teammates, including eight other seniors from last year’s team, which won conference and district titles and advanced to regionals.

With so much returning talent, the Bucs are having another predictably strong season, with a 33-8 overall record as of last week.

“We’re a really well-balanced and deep team,” Smaka said. “When I look at Morgan Ross, Sophia Newhouse, Katie Cole, Claire Holman, and Libby Cole, those are five players who are three-year varsity players. They do an outstanding job for us.”

Katie said she was more of an introvert when she started playing varsity as a sophomore. But now she plays a strong leadership role, and enjoys working closely with her teammates.

“My favorite part about volleyball is building connections with my teammates,” Katie said. “That just makes everything way more enjoyable when you have that.”

She particularly enjoys playing alongside her sister, Libby – so much, in fact, that they are going to remain teammates in college. Both are committed to studying and playing volleyball next year at Indiana Wesleyan University.

“She’s my best friend in the whole entire world,” Katie said about Libby. “We do everything together. When we’re on the court we have such a good connection. I just love doing everything with her.”

That’s because Libby, an outside hitter/libero, tore her ACL and had to miss the second half of her junior season.

She worked hard to rehab in the offseason following surgery, and was back on the court by the beginning of this season, giving Grand Haven a full complement of weapons to compete in the very tough O-K Red Conference.

“She’s getting stronger and stronger all the time, which is good,” Smaka said about Libby. “She is having a good year. She is a heck of a great player and an even greater person.”

Libby said she and Katie started playing volleyball together in the sixth grade, after watching their older sister Abby stand out on the court.

“We didn’t really know what volleyball was until she started playing it,” Libby said. “After that she was a great role model. We always loved going to her games and cheering her on.”

Libby said there was no chance that she and Katie would choose to attend separate colleges.

Smaka said the Coles’ college coach is going to be getting a winning combination.

“They are great kids who really care about the team,” he said. “They are going to make any program better. I think they’ll both step in and have an immediate impact – whether they’re on the floor or not – on the culture of the team that they join.”