Vernonell Smith’s skills were on display in N. Muskegon’s stunning upset of Montague

They thought the Norsemen were in store for a breakout season this fall, but after opening  with consecutive losses to Reed City, Whitehall, Oakridge and Ravenna, North Muskegon was staggered. The team could have easily packed it in and quit.

Instead, Smith and the Norsemen did the exact opposite. 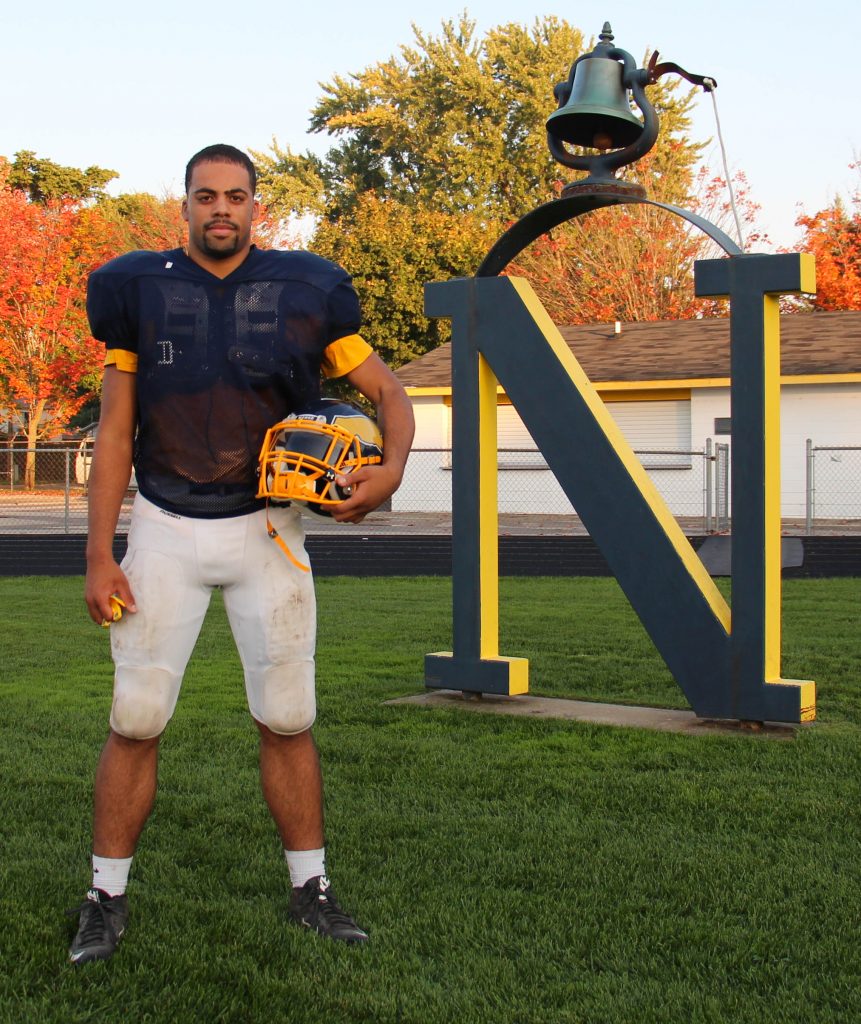 Vernonell Smith, who was at his best in his team’s upset of Montague last week. Photo/Jason Goorman

Last Friday, they pulled off the biggest upset in the area this season, stunning previously unbeaten Montague, 14-6. It was North Muskegon’s second straight win, following a 28-6 thrashing of Mason County Central.

Suddenly things are looking up for the Norse, and Smith has been a sparkplug in the turnaround.

He was at his best against Montague.

Playing on the Wildcats’ home field in rainy conditions, Smith gave the Norse a 7-6 lead with a two-yard touchdown run in the second quarter. He set up that score by breaking loose for a 70-yard run.

The team’s second score, in the third quarter, came after a bad punt inside the Montague 20 that gave the Norse great field position. They took advantage when quarterback Jesse Cook hit Cameron Waller with an 18-yard touchdown pass.

Smith finished the game with 135 yards rushing on 25 attempts. He also was part of a North Muskegon defense that continually turned Montague away from the end zone, despite giving up 283 yards in total offense.

“We knew we hadn’t beaten (Montague) in 16 years,” said Smith, a four-year varsity player at North Muskegon. “So it was a huge win. I’d say the biggest in my career. Defensively, we came together as a group. In the red zone, we got a lot of really big stops.

“We stuck together and made the big plays when we needed them. And coach (Larry Witham) put us in the right position to win.”

All totaled, Smith leads the Norsemen with 473 rushing yards and five touchdowns this season, with a 5.3 yards per carry average. Defensively, he ranks fifth on the squad with 22 tackles, including 15 solo takedowns, and has two interceptions, with one returned for a touchdown.

“He’s a kid with a pretty high football IQ,” said Witham, the team’s first-year head coach. “He’s played a lot of football in his days here. He’s a tough kid, too. He’s played through some shoulder and ankle issues. He’s always been a trooper.”

The 6-foot-1, 195-pound Smith laughingly says he started out as “chubby and lazy kid,” which explains why he started out playing on the offensive line, and not running back, in Mini Mite youth football.

“In Dynamites, I got moved to tight end, then my last year (in youth league), I moved over to running back. That’s what I always wanted to do.” Smith said he developed a passion for the sport from his father, Vernonell Smith Sr., who starred at Whitehall High School as an offensive guard and linebacker. “He passed it on to me,” Smith said. “I’d say that’s where I get my physicality from.”

Smith said he’s learned plenty from his father over the years, but a few words of advice he got from his dad stick out the most.

“He’s always telling me to keep my head on straight,” Smith began. “Grades come first. Always play within my team. And always give 110 percent.”

Those are the type of life lessons that Smith hopes to pass on to the next generation when he achieves is goal of becoming a coach and physical education teacher.

He also plans to continue to play football in college and is currently sorting through his options. He’s already visited NAIA school Dordt College in Orange City, Iowa, and has spoken to coaches at Northern Michigan University and Wayne State.

With only two wins, North Muskegon would need a lot of luck to sneak into the postseason playoffs. The minimum requirement is six wins, and there are only three games left. But sometimes five-win teams sneak under the wire, and Smith is holding on to hope.

“We’re hoping with that Montague win, that might give us enough points to push us in,” he said. The truth is that North Muskegon entered a perfect storm to start this season, with all four of their losses coming on the road to squads that currently boast a combined 19-5 record.

“It’s not like we were losing to any average Joes,” Witham said. “It was pretty stiff competition and we were working a lot of kids into a lot of new spots. We kind of figured we may start that way, but I’d say this team finally started to turn the corner in the Ravenna game (a 28-20 loss). That’s when I think the lightbulb started to go off.”

The Norse were also adjusting to a new coaching staff early on, as well as new offensive and defensive schemes. They were also alternating a pair of sophomores at the quarterback position – Jesse Cook and Mac Young.

But in its two wins since the Ravenna loss, North Muskegon has played turnover-free football and Smith has shined on both sides of the ball. Against Mason County Central, he had 89 yards rushing and a touchdown, and also a 42-yard interception return for a touchdown. “It took some time to run things correctly,” Smith said. “Now, we’re not second-guessing ourselves.”

Kelsey McKinley among leaders after first round of Adams Tour Championship