EGELSTON TOWNSHIP – Since they were small kids, Blake Masterman and Leroy Quinn have been watching the Oakridge football team compete in the state playoffs.

They dreamed of the day when they could be part of that experience and wear the Oakridge blue in a postseason game.

That day has come a lot sooner than they expected.

Masterman is a sophomore and Quinn is only a freshman, but they both played key roles in the Eagles’ successful regular season this fall. 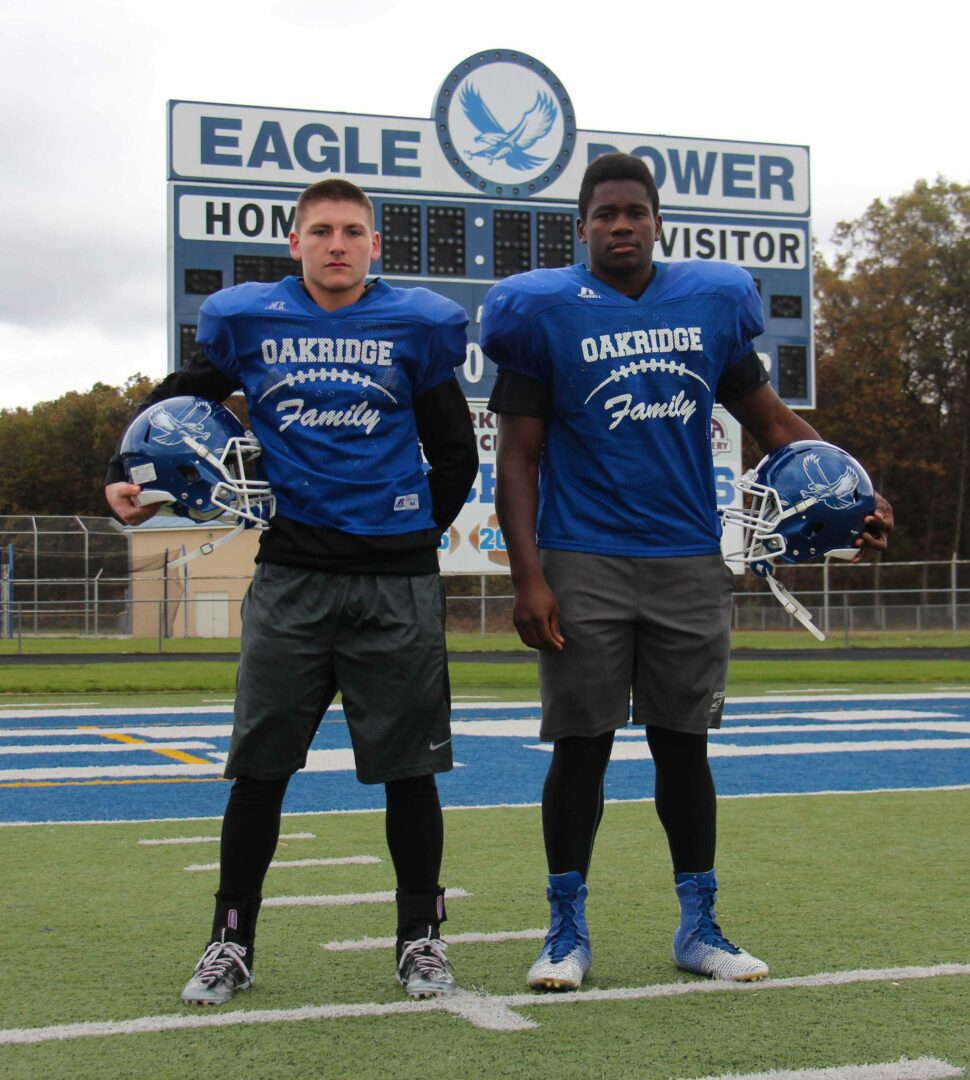 They are both starting running backs in the Eagles’ three-back formation, along with senior Greg Garcia. They are also starting linebackers on defense.

Oakridge finished with an 8-1 record, a West Michigan Conference championship and the team’s 26th berth in the state playoffs in the last 28 years.

On Friday the two 15-year-olds will make their playoff debut, when Oakridge hosts Grant in a Division 5 first-round game at 7 p.m.

“I’m really fired up,” said Quinn, who definitely has the body for varsity football at 5-11, 215 pounds. “I always wanted to be out there playing. I didn’t think it would come this fast. It’s really exciting.”

“It’s just a different feeling,” said Masterman, who gets a lot of production out of his 5-8, 155-pound frame. “It’s exciting stuff. I’m ready.”

Masterman has turned into a “go to” player in the Eagles’ offense as the season has progressed.

He broke loose for 111 yards and a touchdown on 21 carries in the Eagles’ dramatic 31-28 come-from-behind win against Montague on Oct. 15, which clinched the conference title.

Last Friday he piled up 143 yards and two touchdowns on only 11 carries in the Eagles’ 47-0 win over rival Orchard View.

Overall Masterman has rushed for 489 yards and four touchdowns, and has 50 tackles and two interceptions on defense. Those stats would be even better, but one Oakridge win came by forfeit.

“I think it’s because the line is making bigger holes, and holding their blocks down longer,” Masterman said about his recent production. “I admit I was pretty scared the first week, but now I’m getting used to it.”

Masterman’s steady improvement has resulted in a move up the depth chart.

“When we go into our one-back set, he’s gotten the nod for being that back,” Harger said. “I think it’s a matter of his increased comfort level. He’s kind of settled in to how we do things, he feels good with the linemen and their blocking, and he’s got a great set of skills.”

Masterman does not have great breakaway speed, according to Harger. He gets his yards the old-fashioned way, by plowing ahead and battling defenders for every inch he can gain.

“He’s physical,’ Harger said. “He likes the contact. He’s not overly fast. We don’t have a lot of burners on this team. But if he breaks out into the open he makes use of those yards.”

The coaches had to think long and hard about calling Quinn up for varsity this season, just because he’s a freshman, Harger said. While he clearly had the talent and size to play with the big boys, they had to make sure he was mentally prepared.

He’s passed the test with flying colors, according to Harger. Quinn has rushed for 290 yards and four touchdowns on 48 carries. On defense he has 49 tackles and 2.5 sacks.

“Obviously his size as an eighth-grader definitely drew our attention,” the coach said. “He’s one very strong kid. But that was a decision we didn’t want to take lightly.

“We figured he would be called up (next year) as a sophomore, anyway, and we knew he could do it physically. But we had to make sure he was ready mentally, and he’s done a great job.

“Some upperclassmen kind of took him under their wing and helped guide him along. I think that helped his confidence coming up to varsity.”

Masterman and Quinn are just two of several underclassmen who have come through for Oakridge this season.

After losing nearly all of his 2015 starters to graduation, Harger and his staff called up several players who were expecting to be on the junior varsity squad this year.

“We initially pulled up five underclassmen – four sophomores and a freshman – then we called up my son, who’s another sophomore,” Harger said. “We have six underclassmen playing big roles, and we’re very pleased with how they’ve performed.”

Masterman and Quinn knew a lot of people expected Oakridge to struggle with such an inexperienced team, but they weren’t concerned about the critics.

“We had doubters and everything, but we showed what we could do as underclassmen,” Quinn said.

Both boys obviously have several varsity seasons, and probably a lot of playoff games, to look forward to. But they say they want to make a serious run in the playoffs this fall, to give the seniors – starting with standout quarterback Brady Luttrull – a proper sendoff.

“We owe it to Brady and all of them for putting in all this work for all these years,” Masterman said.