They keep falling behind in big state tournament games, keep rallying, and keep scoring winning goals in the most dramatic fashion.

It happened again on Wednesday in the Division 4 state semifinals. 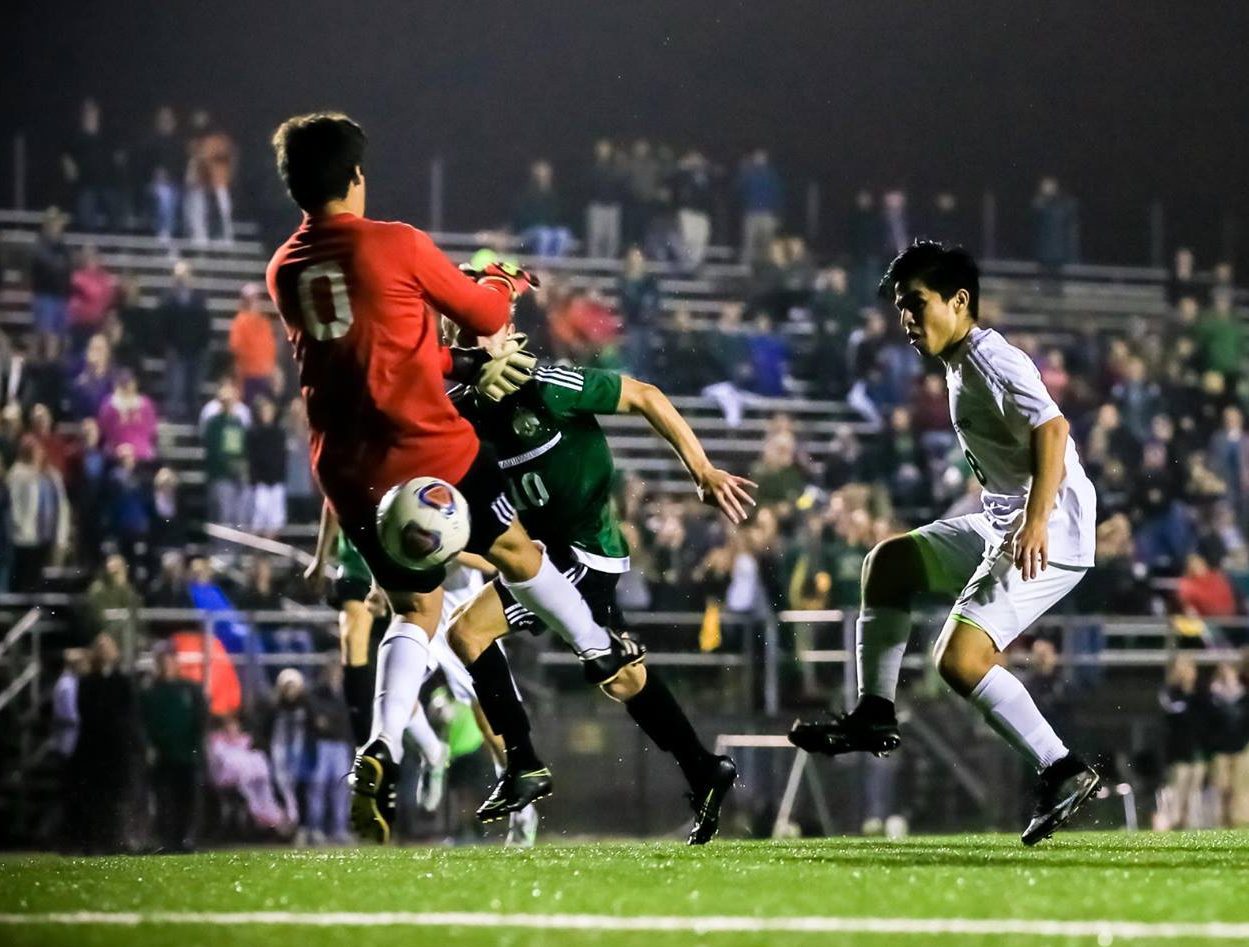 The thrilling victory propelled the Crusaders to the Division 4 state championship game on Saturday. They will play defending state champion Genesee Christian at a site yet to be determined.

“It’s just a group of kids that refuses to lose,” said Muskegon Catholic head coach Bill Moulatsiotis, whose team also came from behind a week ago and won a regional championship game in dramatic fashion. “There’s no magic dust involved or anything like that. They just don’t want to lose. They want to go all the way.”

MCC senior forward Jose Zambrano said it was “crazy” that his squad was facing a grim end to its magical season with just seconds left in regulation.

Hackett had taken a 2-1 lead with 20 minutes, 41 seconds remaining in the second half, and held that advantage nearly all the way.

But Zambrano had just enough time to make a season-saving play. He gained control of a soaring pass from midfield and fired a shot past Hackett senior goalie Matthew Carpenter, tying the score at 2-2 and forcing overtime.

“I heard their defender say ‘I got him, I got him,'” Zambrano said. “And once I heard him say that, I knew I had him on my back. I was able to shield him off and get control of the ball, and I just slid a shot right into the goal.” 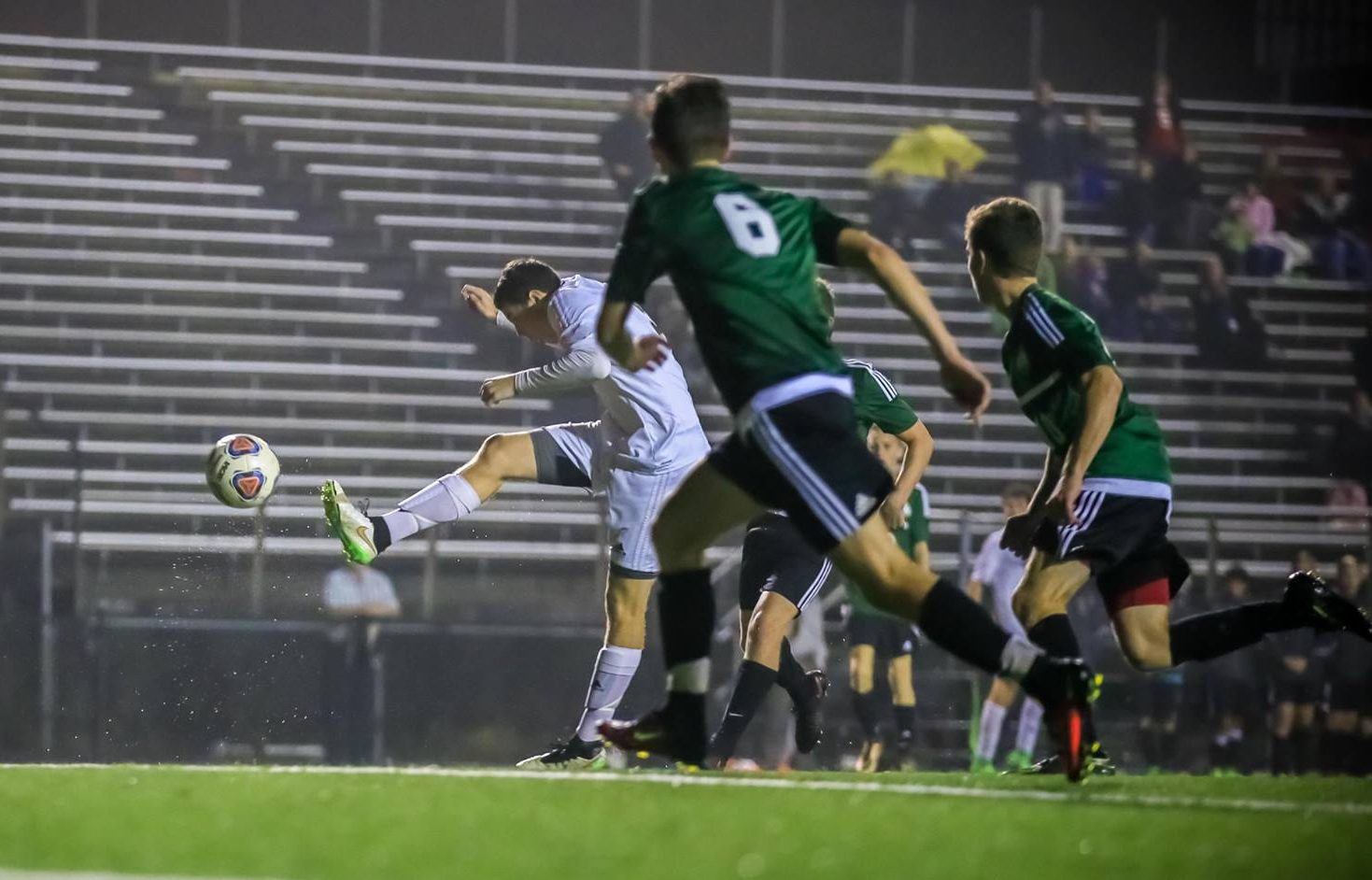 Collin Powers blasts a shot that finds the back of the net for Muskegon Catholic. Photo/Tim Reilly

Zambrano frantically sprinted toward the MCC sideline as the Crusader fans roared at the amazing turn of events.

Knotted at 2-2, the game was sent to two 10-minute overtime sessions. After a scoreless first overtime, the teams put forth a tremendous two-minute stretch of clutch goal scoring that cemented the game as an instant classic.

The Crusaders struck first, when a breakdown in the Irish defense allowed MCC senior Collin Powers to corral a bouncing ball and easily lace a shot to the left corner of the net, giving the Crusaders their first lead at 3-2 with 7:55 remaining.

But Hackett, which featured a tremendous trio of speedy forwards, answered quickly. Sophomore Max Keenan got just a sliver of space at the top of the penalty box with 7:04 remaining and rifled a shot past MCC goalie Connor O’Neill to tie the game again.

Just a minute after the Irish equalizer, MCC senior Neil Kuharevicz cleaned up on a rebound that glanced off the hands of a diving Carpenter and blasted it back into the Hackett net, giving MCC its final lead.

“This was just my second goal of the year,” Kuharevicz said. “My first came in districts against Algoma (Christian). Fortunately this one was bigger. I was in the right place at the right time.

“We scouted this goalie and we knew his hands weren’t the best,” he added. “We knew crashing (the net) was key. We worked on it quite a bit at practice.” 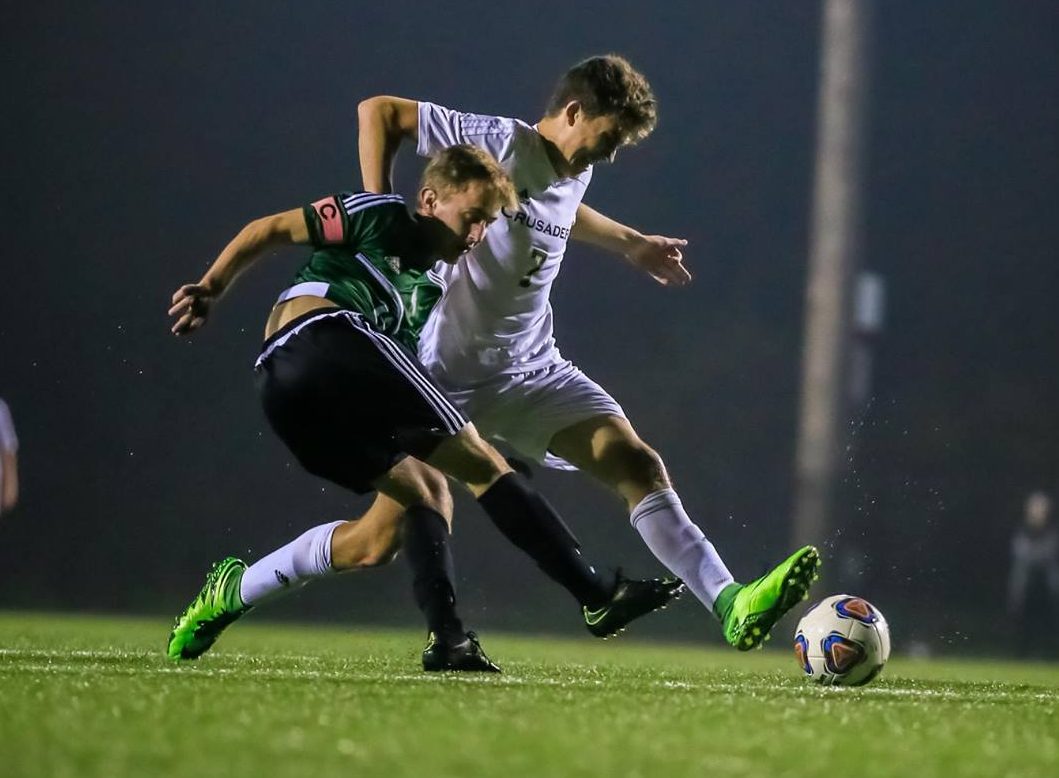 Neil Kuharevicz gets his foot in front a Hacket kick. Photo/Tim Reilly

Inspired by retaking the lead again, the Crusaders successfully played keep-away from Hackett’s dangerous playmakers in the final five minutes, and the Irish failed to get another shot on goal.

The Crusaders trailed 1-0 at halftime. Zambrano tied the score nearly nine minutes into the second half when he took a beautiful heel pass from teammate Jose Mojica and fired the ball into the net.

The score remained tied until Hackett sophomore Aidan Gillig headed a shot past O’Neill with 20:41 left in regulation. That led to Zambrano’s dramatic goal with 10 seconds left, and the two goals in overtime that won the game.

“As far as dramatics, yeah, this one takes the cake,” Moulatsiotis said. “The last game had its dramatics as well, but somehow these kids did it again. It was wild.”

After the final seconds ticked off the clock, the reactions of the two teams were vastly different.

Several Hackett players slumped to the turf in disbelief, pulling their jerseys over their faces. The Crusaders were a mound of hugs and euphoria, while Moulatsiotis knelt to the ground on one knee and said a brief prayer.

Kuharevicz probably summed it up the best after the game.

“Playing rec soccer my whole life, it doesn’t matter where you’ve come from, it only matters how hard you work,” said the kid who scored the winning goal. “We don’t quit. We call ourselves grinders. We never stop.” 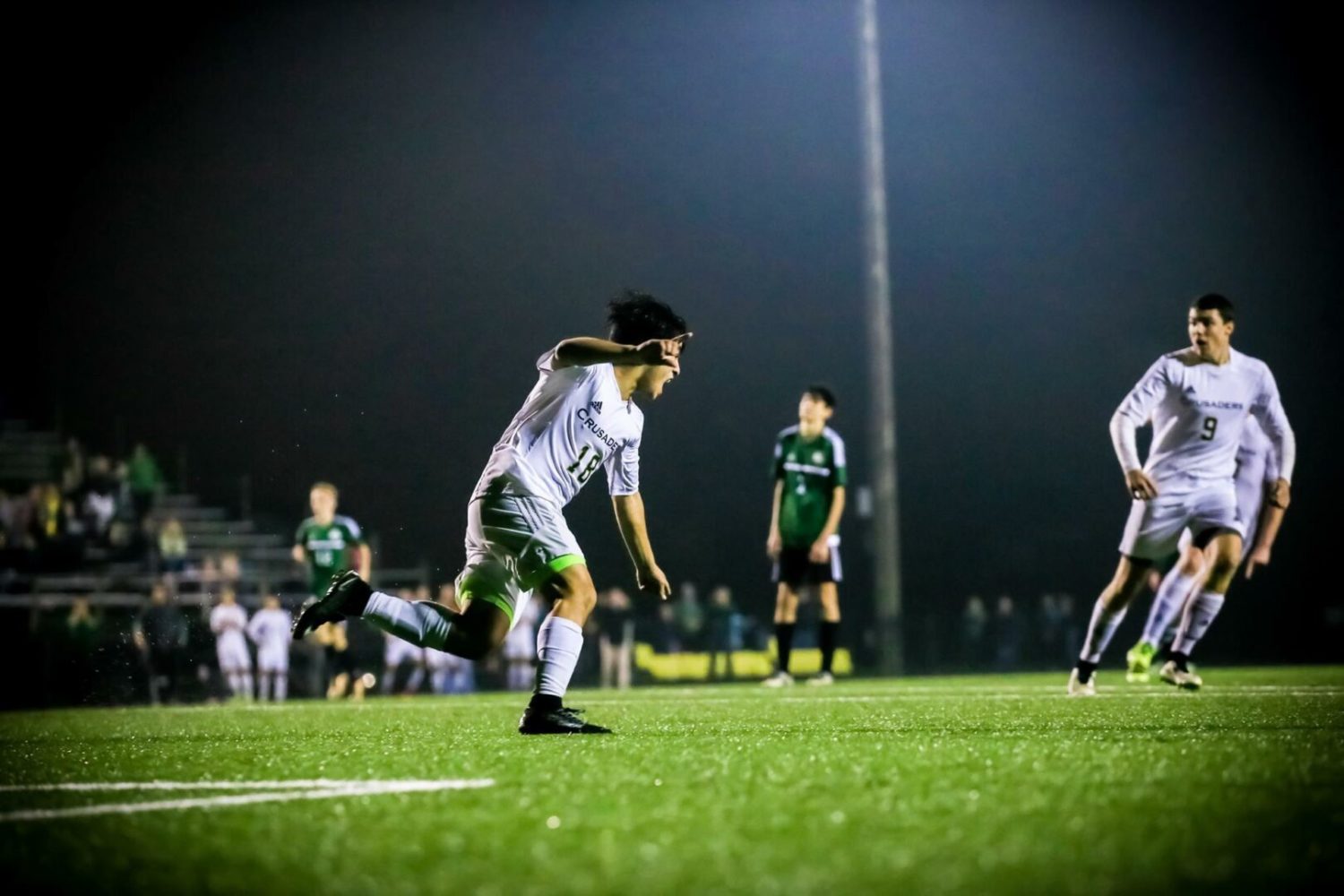 Jose Zambrano celebrates after the game-tying goal just before the end of regulation for MCC. Photo/Tim Reilly 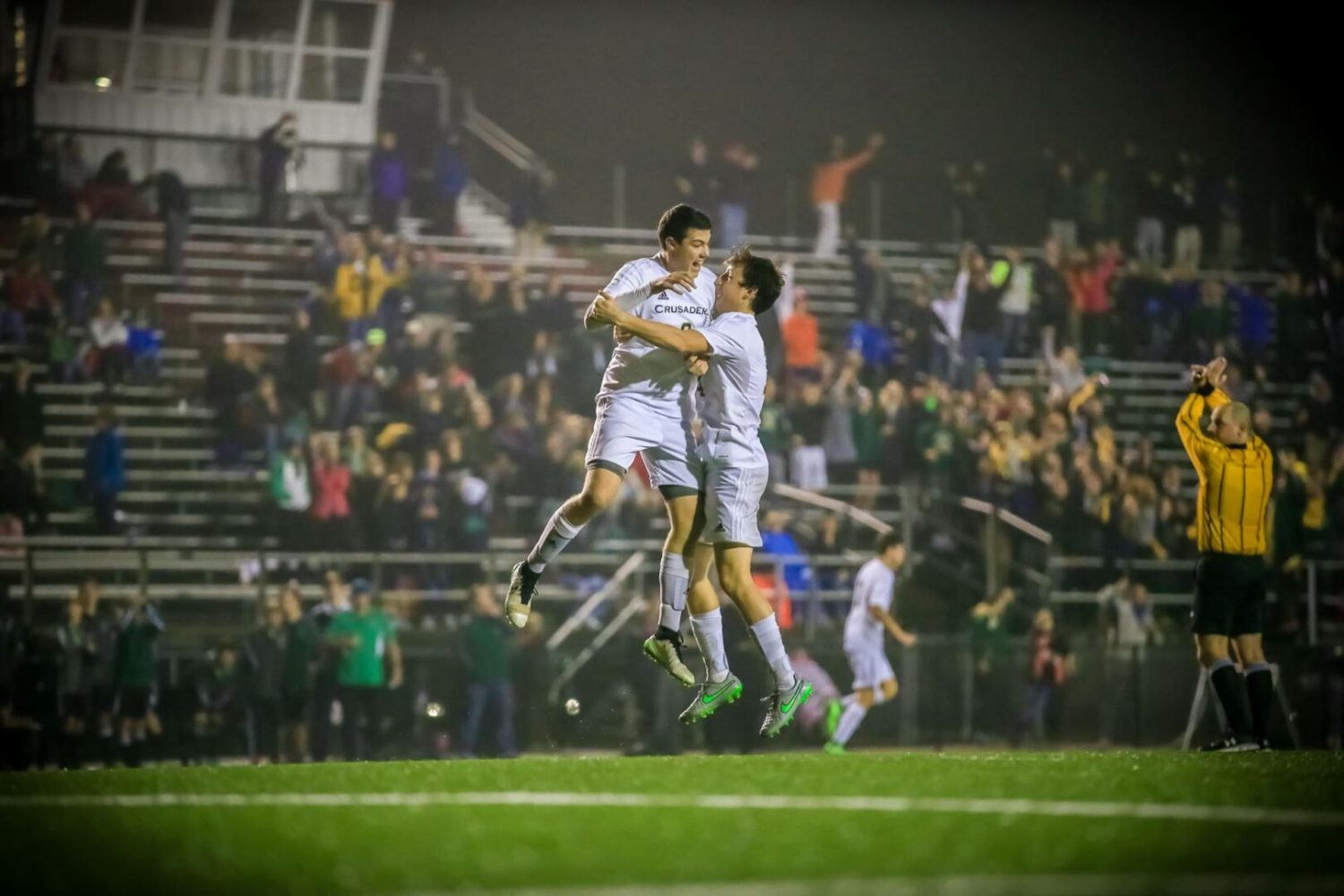