MUSKEGON – At the beginning of the season it looked like the Muskegon Lumberjacks had Czech Republic native Adam Brizgala slated as their starting goaltender.

But Brizgala struggled out the gate. He was pulled from the game on opening night on the road

against Team USA after allowing five goals on 15 shots over two periods.

His playing time decreased throughout October, with only three starts in the next 10 games following the opening-game loss.

In three games in October, Brizgala posted a 2-1 record with a .855 save percentage, making 65 saves out of 76 shots.

But since the calendar turned to November, Brizgala has been gaining confidence and playing time, and has been much more successful.

Brizgala has won four of his last six starts, stopping 155 of 170 shots for an improved .912 save percentage. He is currently sharing goaltending duties with Keith Petruzzelli. 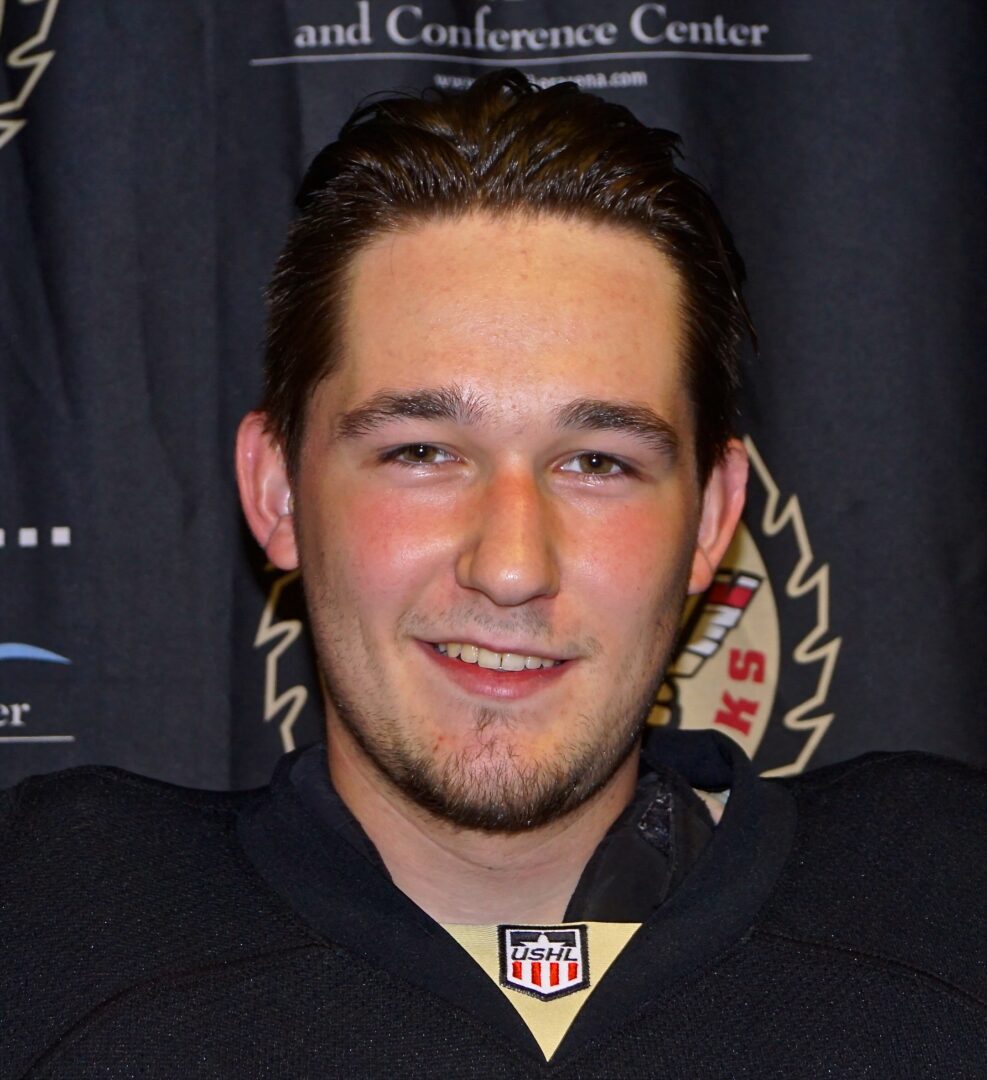 Brizgala’s latest win came on Saturday night, when he stopped shots by all three Lincoln players in a one-on-one overtime shootout, giving the Lumberjacks a 4-3 victory on their home ice.

The win improved the Lumberjacks’ record to 13-8 on the season, which is good for 26 points and a second-place tie in the Eastern Conference.

Muskegon will open a four-game road trip on Friday night against the Lincoln Stars and close the weekend on Saturday in Omaha against the Lancers.

Brizgala’s only major hiccup of late came on November 18 in Sioux City where he quickly allowed two goals on three shots.

He was pulled 5:32 into the game in favor of Petruzzelli, who also allowed two goals against the Musketeers in a 4-1 loss.

“He is used to a bigger sheet of ice,” LaFontaine said. “If his opponents (in Europe) had any type of odd- man rush usually they didn’t shoot, they would try to find the back door with a pass. So he just had a habit of coming out and playing the puck and getting beat (earlier this season). It was a mental thing he had to get over.”

Lumberjacks make a pair of trades

“We needed some depth at the center position because we are going to have more players out with tournaments coming up and Chicago wanted a defenseman and they asked about Derek (Daschke),” LaFontaine said.

Hakkarainen, who is from Finland, has compiled four assists this year. He scored 13 goals and notched 27 assists last season playing for Brookings of the North American Hockey League.

“We are really excited about his potential,” said LaFontaine about Hakkarainen. “He is very smart, has speed and good vision.”

The Steel receive Daschke, who had one goal and five assists for Muskegon in 20 games this year. He totaled three goals and 14 assists in 75 games for the Lumberjacks in his two years with the club.

The Lumberjacks shored up their blue line corps shortly after the Chicago trade, picking up Tri-City Storm defensemen Jack McNeely in exchange for forward Logan Drevitch.

McNeely, from Lakeville, Minnesota, led the Storm to the Clark Cup championship last season as the team captain. He had 10 assists last year for Tri-City – eight in the regular season and two in the playoffs. He is off to a slow start this season with just one assist in 17 contests.

“It’s hard to win a championship,” LaFontaine said. “To get a player wo knows what it takes to lead his team to a championship makes this a strong addition for our team.”

Drevitch had four goals and five assists for Muskegon in 19 games this year.

“It’s very tough having to making trades,” the coach said. “You get attached to these kids as you help them develop on the ice.”

Andrei Svechnikov was named the USHL Forward of the Week for the second time in November.

Svechnikov contributed a goal and two assists in Wednesday night’s loss to the Team USA Under-18 squad. He added a goal, an assist and the game-winning shootout goal against the Lincoln Stars at L.C. Walker Arena on Saturday night.

The Russian phenom currently has 10 goals and 12 assists for 22 total points in 15 games for the Lumberjacks.

Jacks in the thick of the conference race

One-third of the way through the regular season, the Lumberjacks in prime contention for a playoff spot and an Eastern Conference title.

Muskegon is now 13-8 on the season, which is good for 26 points and a second-place tie with the Dubuque Fighting Saints. The two teams trail first-place Chicago by four points.

The Green Bay Gamblers currently hold the fourth and final playoff spot in the conference with 25 points, while the Youngstown Phantoms are in fifth place with 24 points.

The Bloomington Thunder (21 points), Madison Capitols (18 points), Team USA (11 points) and Cedar Rapids RoughRiders (4 points) round out the rest of the standings.

Cedar Rapids finally won its first game of the season last Saturday night after going winless in its first 18 games.

The Roughriders, one of the most successful franchises in the league in recent years, defeated Waterloo 3-0 to improve its record to a lowly 1-16-2 on the season.

MOYES MEMORIES: Looking back at 82 years of the West Michigan Conference