PETOSKEY — Muskegon Catholic Central senior Walker Christoffersen scored three times in a 35-0 Division 8 semifinal win over St. Ignace on Saturday, but his most important play might have been one

that didn’t finish in the end zone.

conditions, Christoffersen reeled in a 30-yard catch on a pass that Muskegon Catholic quarterback Trenten Bordeaux threw into a fierce wind, setting up a two-yard touchdown run by Logan Helton that gave the Crusaders a crucial 14-point halftime lead.

The Crusaders used the momentum from that score to pull away in the second half and seal up their fourth consecutive trip to the Division 8 state finals next Friday at Ford Field in Detroit.

“I thought that was a huge point in the game, because if we don’t score there going into the half, it’s just a one-score game,” said Crusaders Coach Steve Czerwon. “Having a two-score lead and the ball to start the second half, it gives a team a lot of confidence that you’re in control and in good shape to win.” 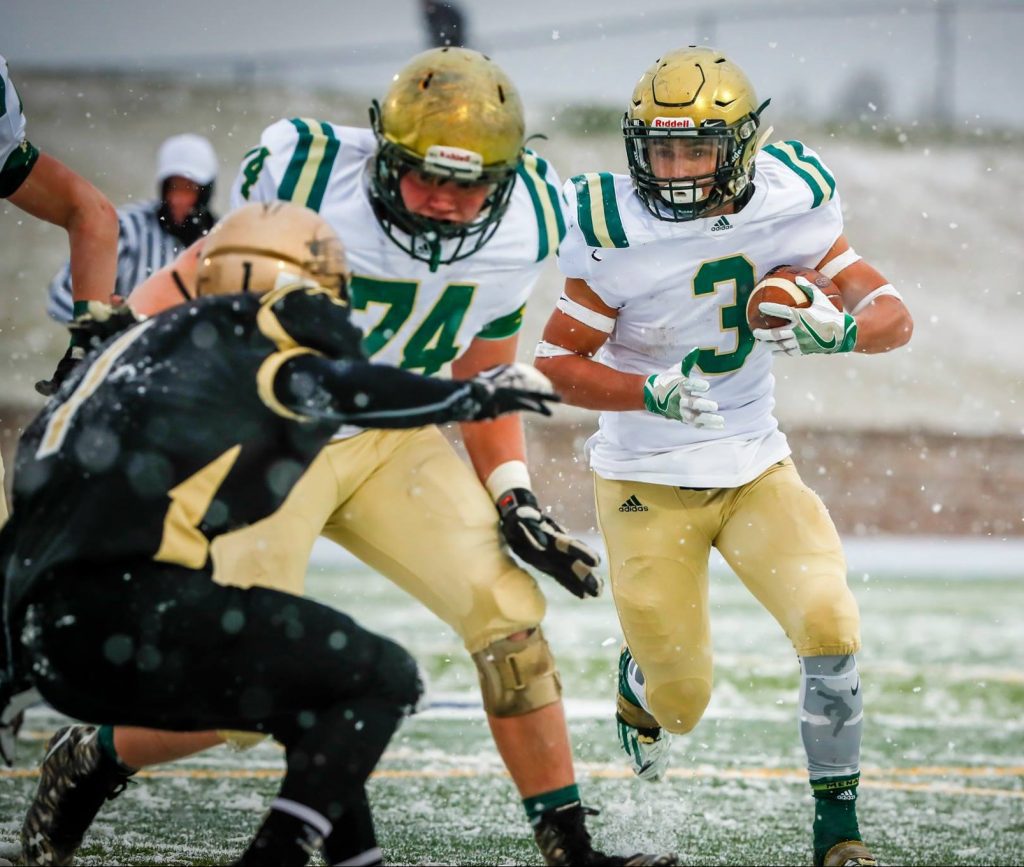 “People ask me all the time about the possibility of four straight titles, and what it means, but the truth is that every year is its own thing, and every team is different,” Czerwon said. “This is about this group of seniors, what they’ve accomplished this season, and finishing the job they’ve started.

“Any time you can play in a state final, it’s a special thing, whether you’ve been there a bunch of times or it’s your first time. It’s not something these guys are ever going to take for granted.”

The big pass that Christoffersen caught just before halftime was one of just two attempted by the Crusaders, who stuck to the ground offensively due to fierce winds and driving snow that made throwing inadvisable.

Christoffersen had a huge day, opening the scoring in the second quarter with an 88-yard touchdown run, and adding second-half scoring bursts of 8 and 37 yards to help put the game away.

“Walker, he just happened to break some big plays and have a special day,” Czerwon said. “We’ve got a pretty diverse offense, but on a day like today you’re glad to have that double tight end stuff, those full house sets, because you really need it in weather like this. 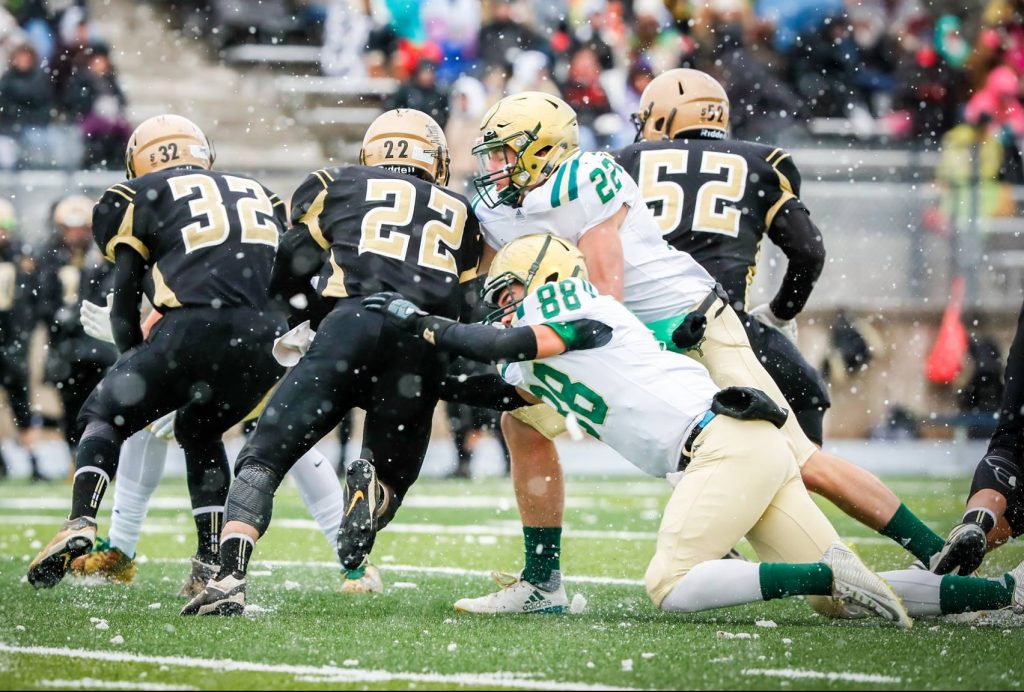 MCC’s No. 88 Jacob Martinez and No. 22 Mason Convertini on the stop. Photo/Tim Reilly

“Walker stepped up and delivered out of those formations again and again.”

Helton finished with 40 yards on 10 carries to go with his first-half touchdown. LaTommy Scott added 53 yards on 12 carries and Dawson Stiegman closed out the scoring with a five-yard touchdown run in the final two minutes for the Crusaders.

Defensively, the Crusaders earned their third straight shutout, and fourth this season, holding the high-powered Saints offense to 155 total yards and one trip inside the red zone.

Alex Schulte led the Crusader defense with 12 tackles, including two for losses, and a sack. Christoffersen recovered a fumble and Jackson Riegler chipped in six tackles and a touchdown-saving pass breakup on St. Ignace’s lone red zone trip.

“St. Ignace is a good team, and big, and they pushed on us a little bit and were able to generate some yardage and first downs that way,” Czerwon said. “We made some adjustments as the game went on, and I think our quickness off the edge really made a big difference, especially in the second half.” 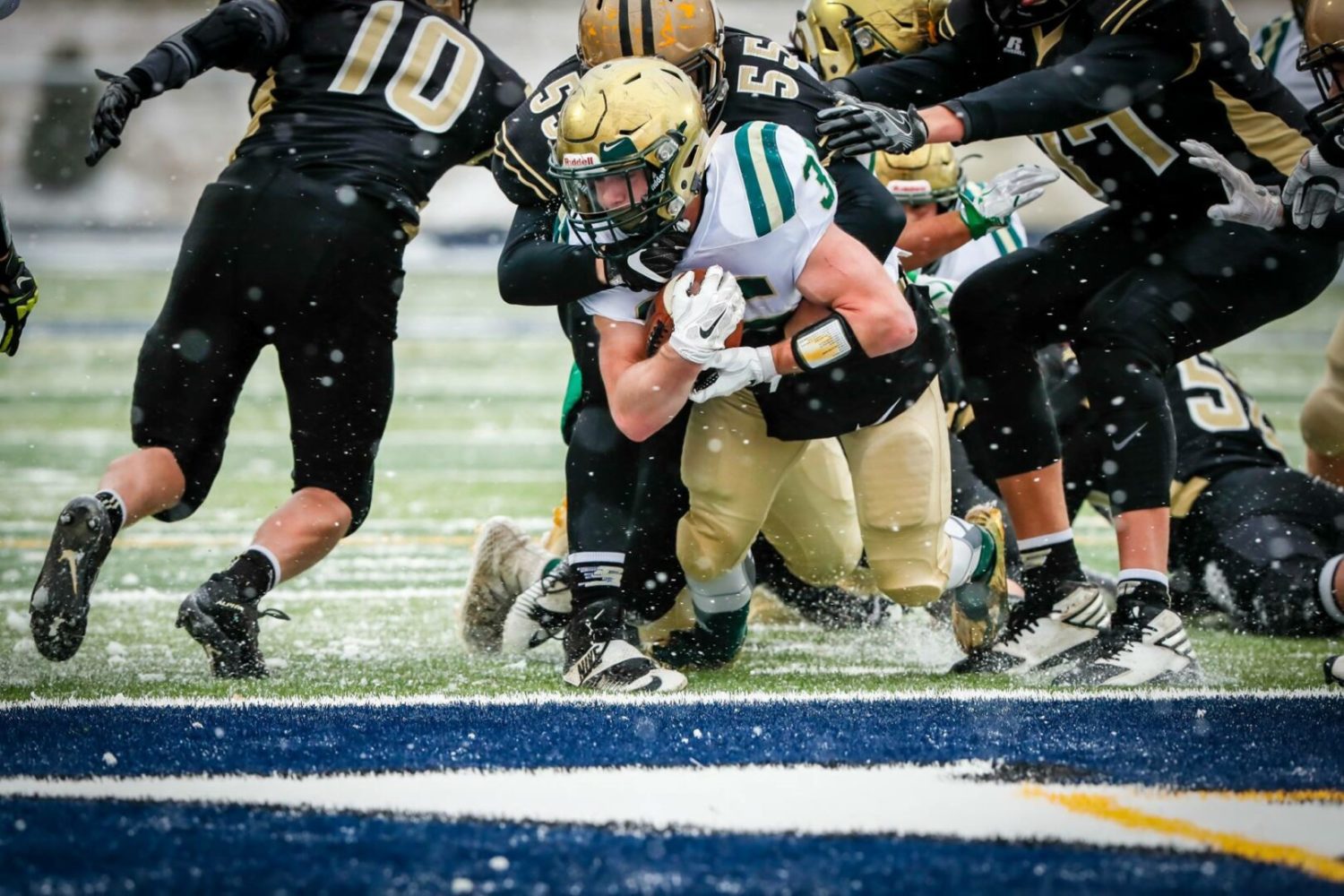 Crusader running back No. 35 Logan Helton breaks through the end zone to help give MCC a 14-0 lead before halftime. Photo/Tim Reilly 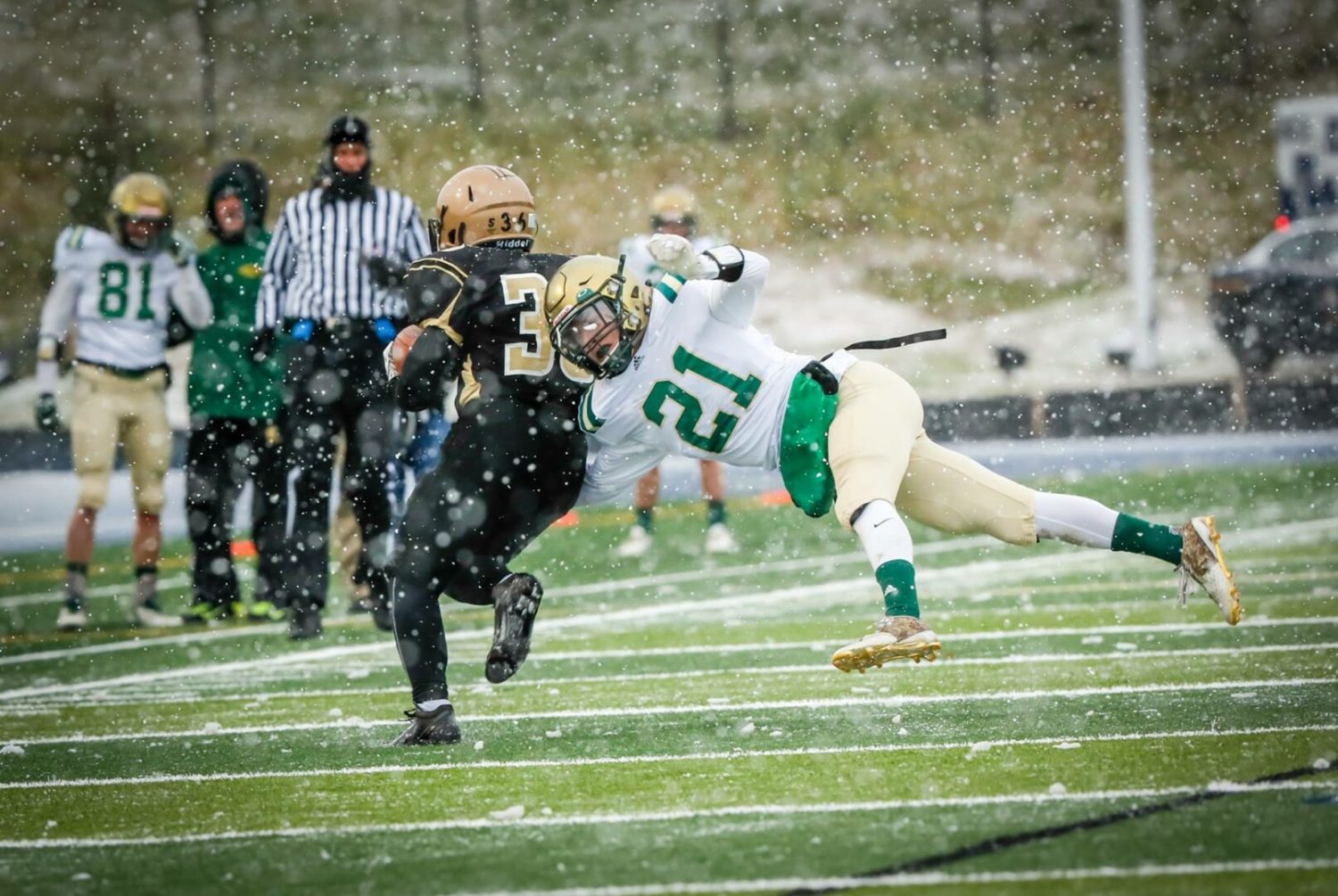 Cole Charlesworth reaches out to make the tackle for MCC. Photo/Tim Reilly 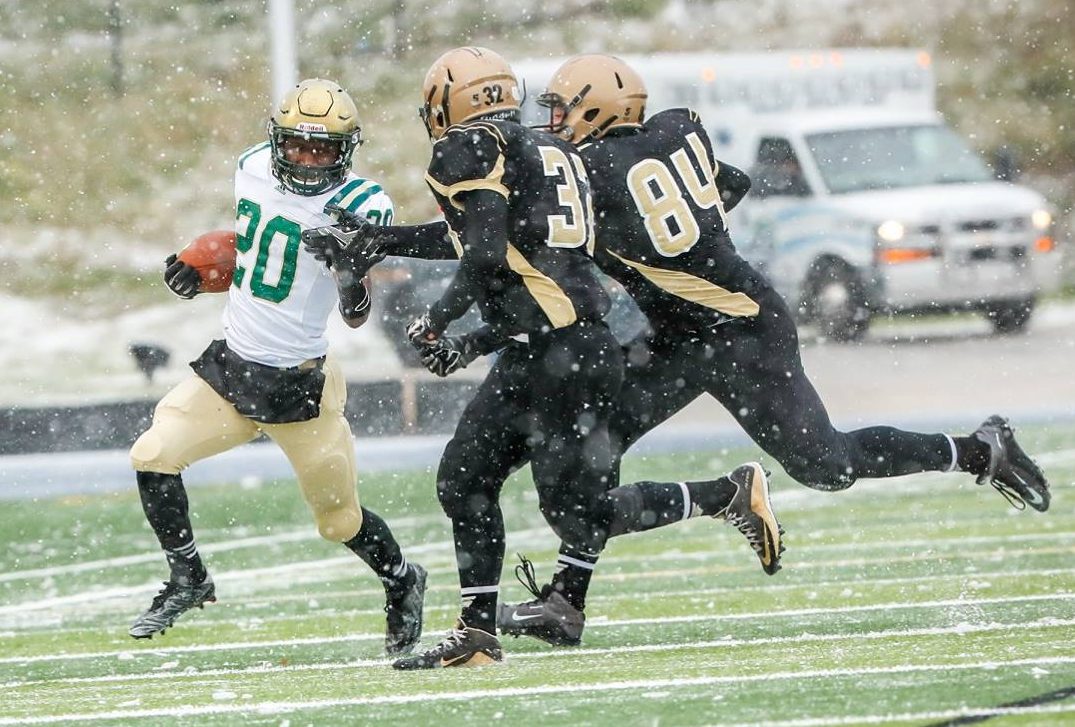 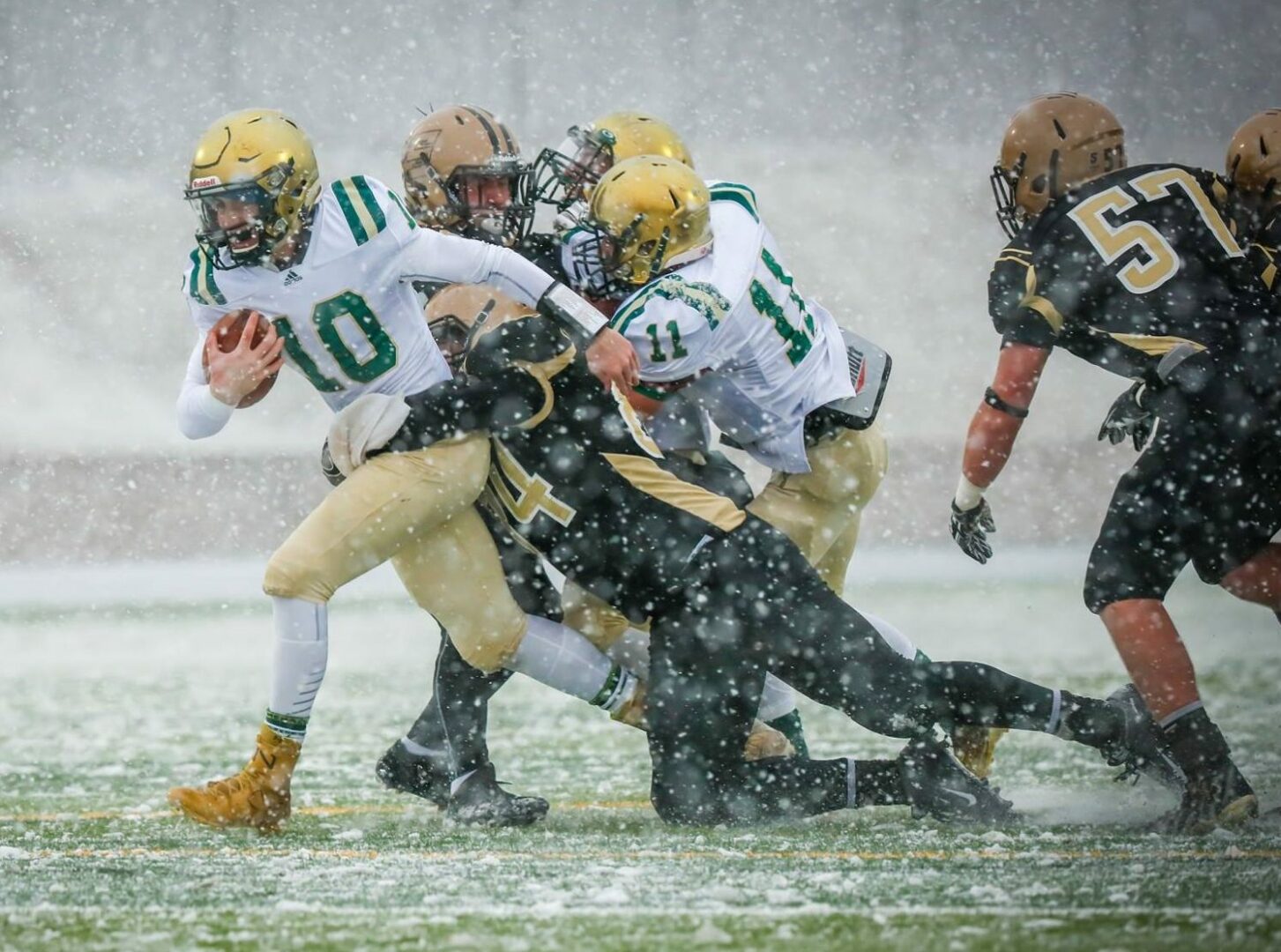 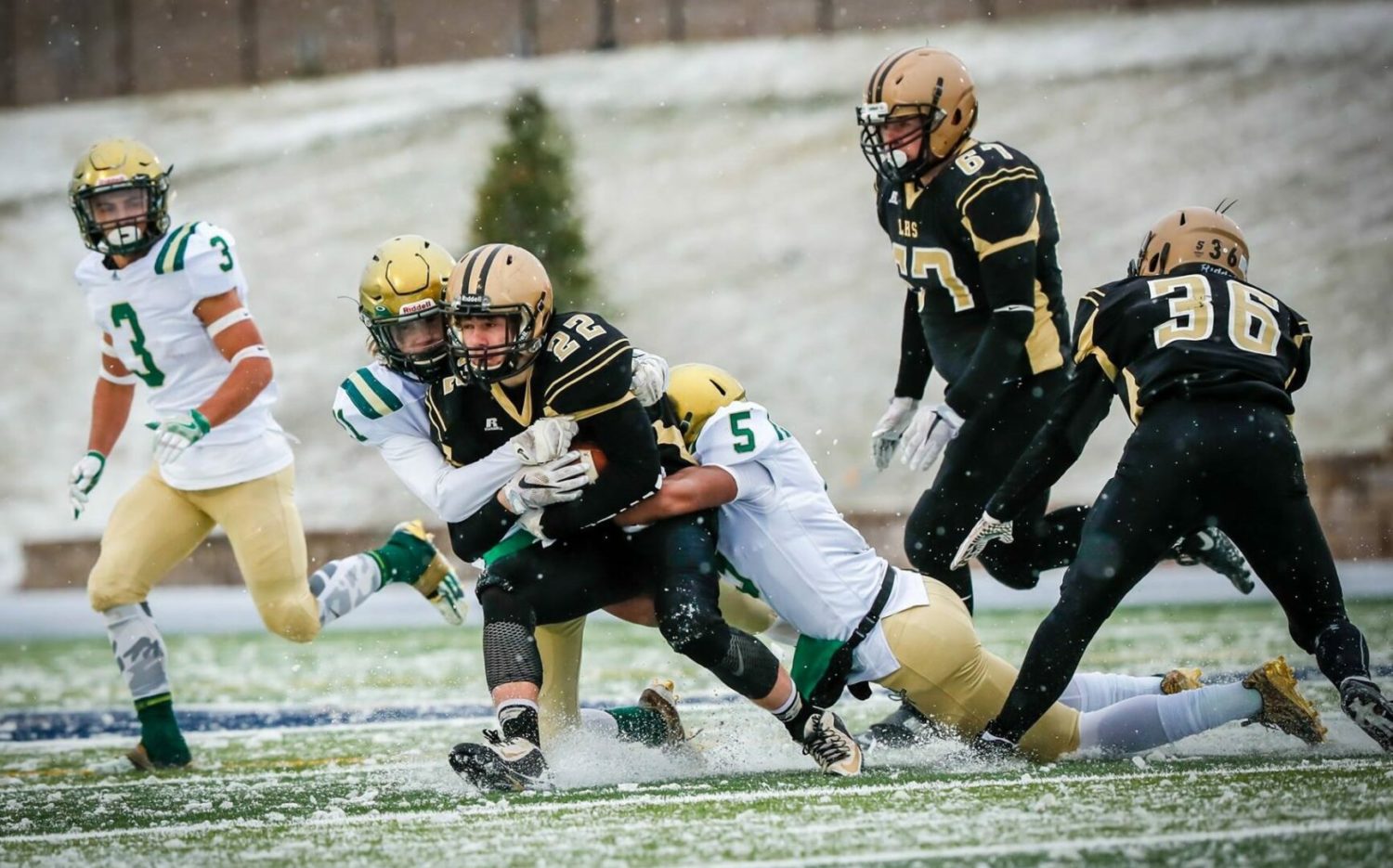 MCC’s Caleb Muskovin left and No. 5 Cameron Martinez on the tackle. Photo/Tim Reilly 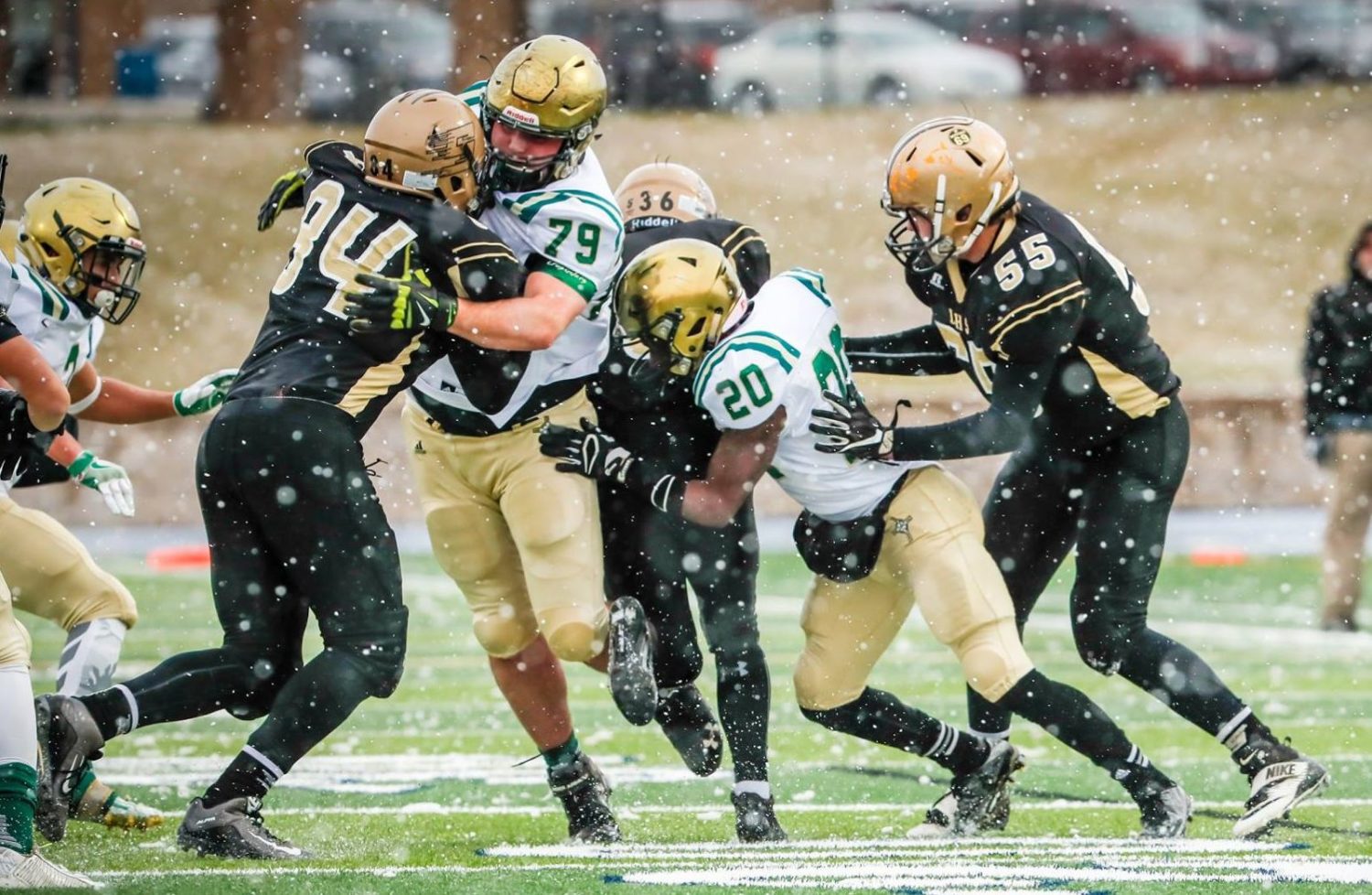 No. 79 Brock Johnson makes the stop for MCC with No. 20 LaTommy Scott. Photo/Tim Reilly 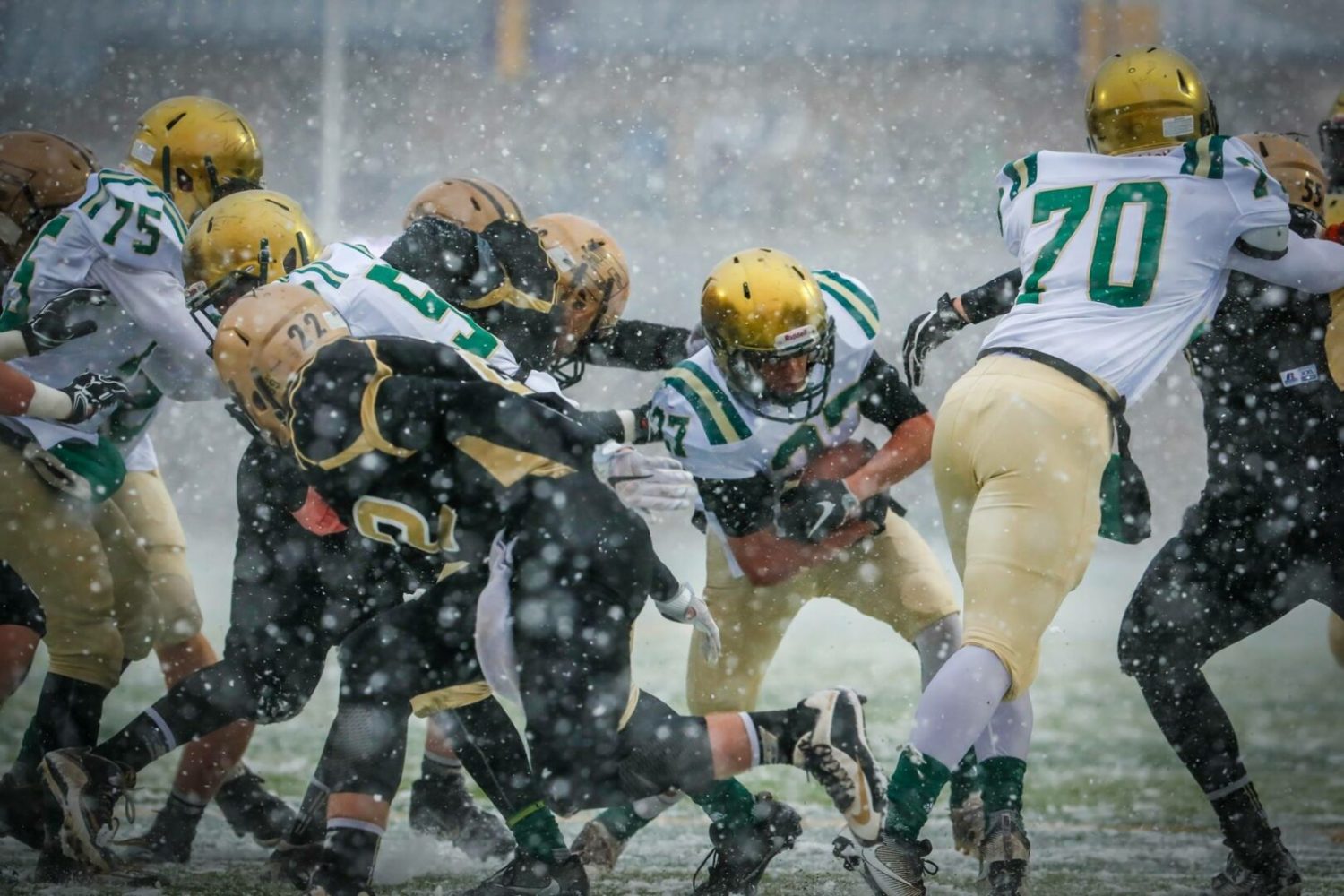 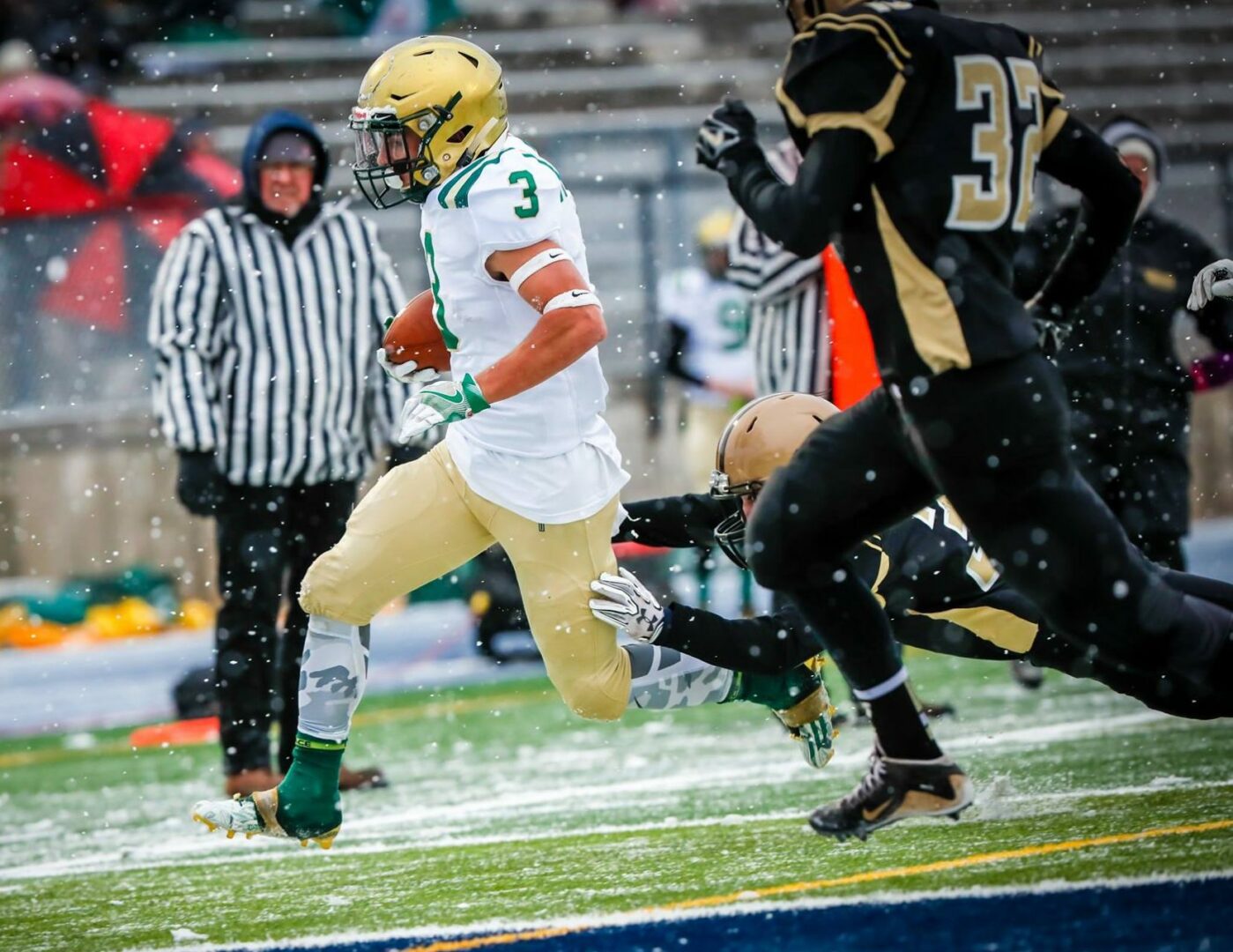 Crusader running back Walker Christoffersen gets around the edge for the touchdown. Photo/Tim Reilly