As a middle-schooler, he watched his older brother, Christian Martinez, win three straight state titles, 2013 through 2015, with the Muskegon Catholic Central Crusaders. 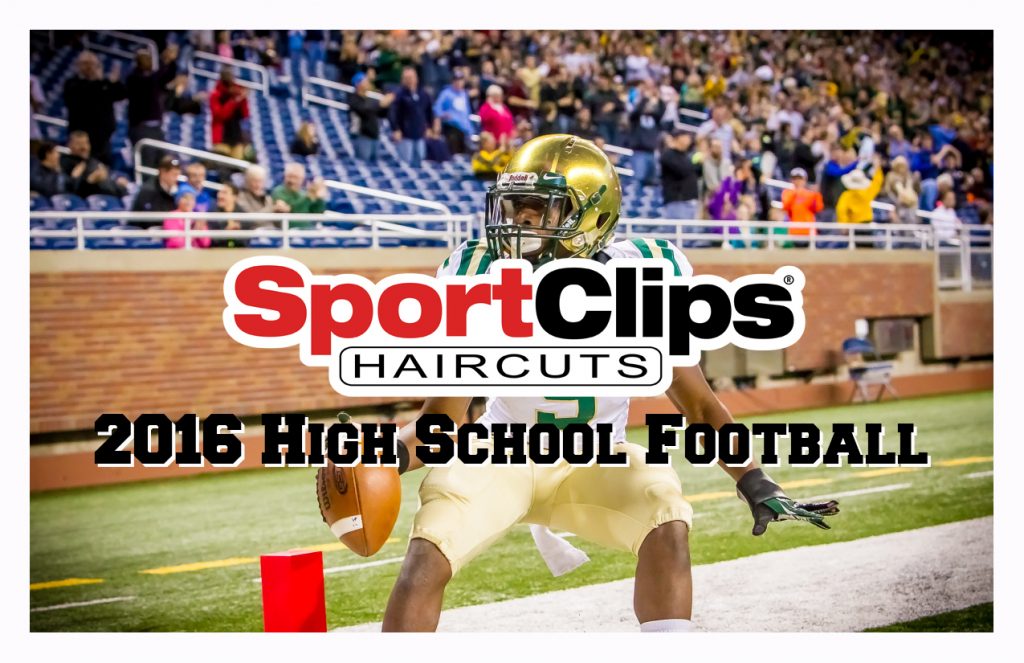 But on Friday morning Cameron became a state champion himself, and joined that elite club in pretty spectacular fashion.

Martinez, who has shared quarterback duties with senior Trenton Bordeaux all season, sparked the Crusader offense after a slow start with several electrifying runs out of the shotgun formation.

His most important work came in the second quarter. He opened the quarter with runs of 26 and 19 yards, and a pass completion to Walker Christoffersen covering 26 yards, to set up MCC’s first touchdown.

The Crusaders never trailed after that. 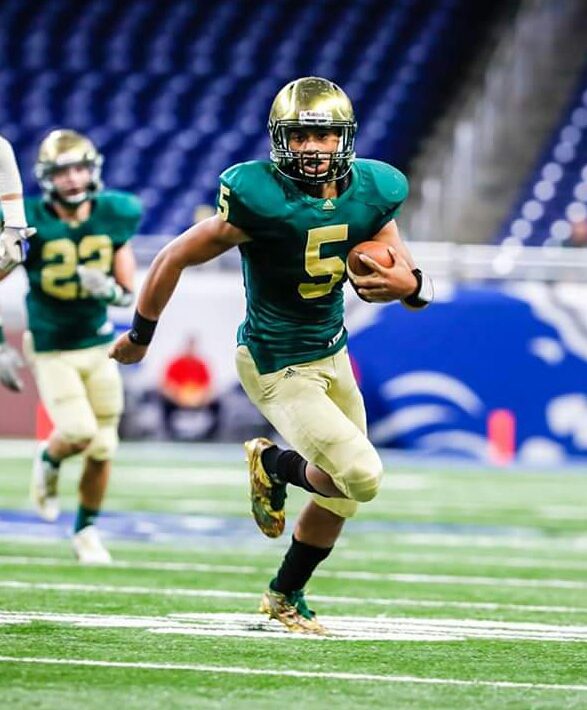 “I asked Christian, who is Cameron’s brother, if he was nervous for Cameron and he said ‘No, he’s made for these big moments,’” said MCC Coach Steve Czerwon. “After he said that I figured he knows more about him than I do.”

Martinez said he was motivated by the thought of giving his senior teammates yet another title.

“It feels great,” said Martinez, whose brother graduated last spring. “Every time they made it (over the past three years), I was watching from the sidelines and the crowd. I couldn’t wait to put on the gold helmet and bring this team back here again. So I mean it just felt great.

“I was looking forward to this since the beginning of the year. I love this group of seniors and I’m going to miss them. That’s just what I wanted to do, I wanted to give them their fourth straight title.”

The victory capped a perfect 14-0 season for the Crusaders, and put them in elite company in the history of Michigan High School football.

MCC has now won four straight state titles, a feat matched by only three other schools – East Grand Rapids, Farmington Hills Harrison and Ithaca – since the inception of the state playoff system in 1975. 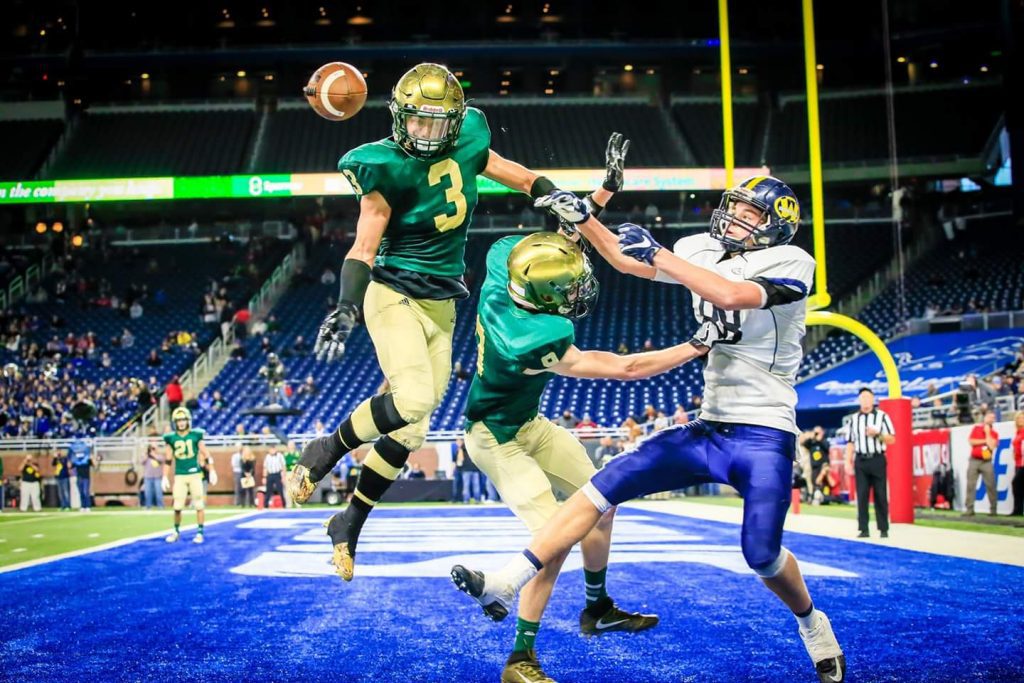 No. 3 Walker Christoffersen breaks up for MCC. Photo/Tim Reilly

“It has been wonderful,” said Czerwon, who has now won state championships every year of his four-year career. “There is such a great work ethic at Muskegon Catholic. The kids are just going to get back to work on Monday.

“We have great support from the school and the parents, we get outstanding kids who accept coaching, and I don’t know if you could want any more than that.”

Martinez was far from the only star in the Crusaders’ history-making victory.

Helton, Scott and teammates Brock Johnson, Adam Benoit and Bobby Guidice now have the rare distinction of being state champions all four years of their varsity football careers.

Meanwhile, the MCC defense, which has been incredibly stingy all season, set the table for the offense by preventing Whitefords’s offense from sustaining long drives throughout the game.

The Bobcats gambled on fourth-down, short-yardage situations on five different occasions, including three times in the crucial first half, when the outcome was still in doubt.

The Crusader defense stopped them each time, allowing the offense to take over in good field position and provide enough points to win. 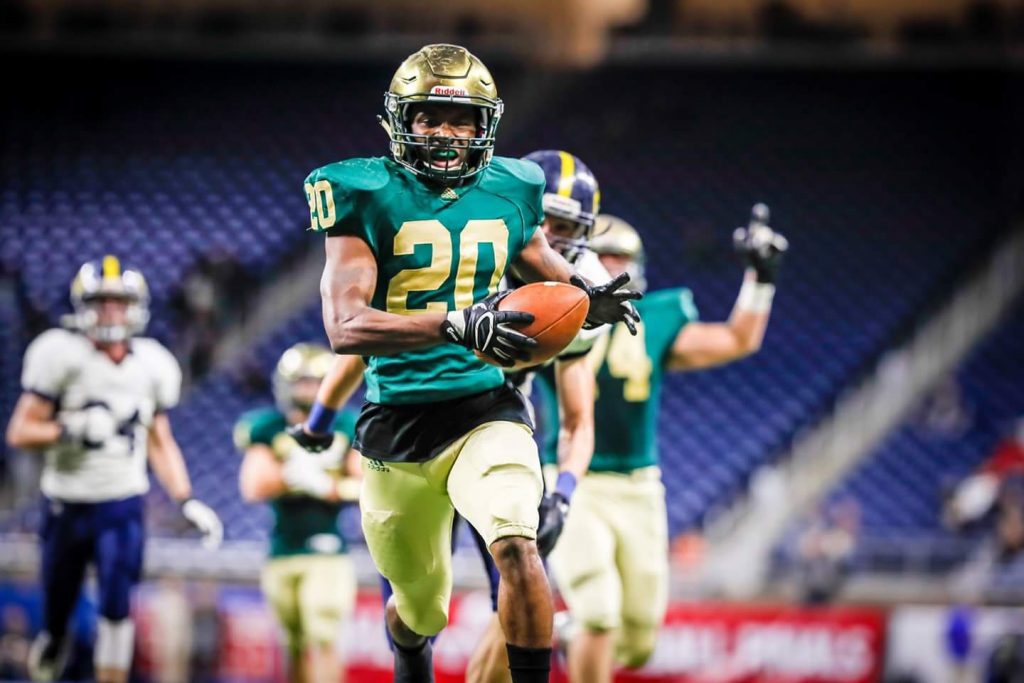 Overall Whiteford amassed 350 total yards of offense, but was only able to find the end zone once.

The MCC defenders only gave up 177 points all season – and none at all in the first quarter through all 14 games. That effort allowed the Crusaders to outscore their opponents by an incredible 434 points this season.

Linebacker Andres Schulte, who has led the MCC defense all season, was once again the top performer on Friday, recording 13 tackles. Helton added 10 stops while Christoffersen had 7, Jackson Riegler had six and Miles Novotny had five.

“We came up big,” Schulte said. “A lot of plays were made at the line of scrimmage and backfield and we needed them to be. It was a big key of the game and we pulled it off.”

“They had us on the ropes a few times,” said Czerwon. “We have never trailed this year, we had the lead in every single game we played. That’s a credit to the kids and defensive coach Mike Ribecky, who’s been around a long time.” 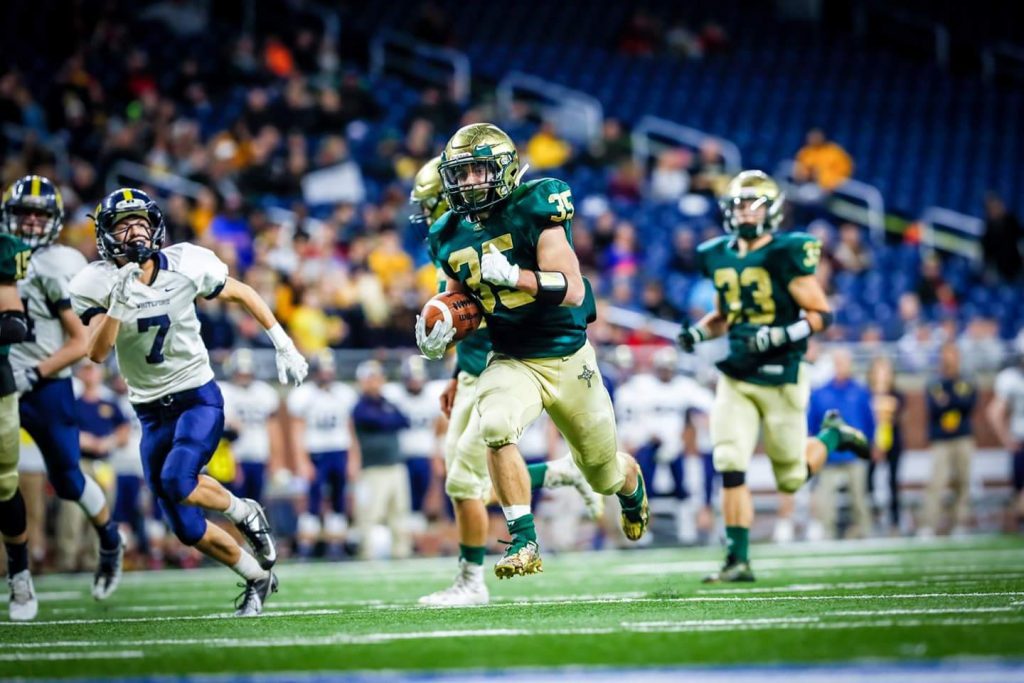 Muskegon Catholic, known for its explosive offense, had little chance to get on track in the first half, when Whiteford dominated time of possession 10:09 to 1:51 in the first quarter and 15:22 to 8:38 in the half.The Crusader defense made up for that by coming up with three big fourth-down stops to end Whiteford offensive drives.

Whiteford took the opening kickoff and drove to the MCC 41, before turning the ball over on downs for the first time.

The Bobcats drove to the MCC 14 on its next possession, before again failing to convert on a fourth-down play.

The Crusaders took advantage of that opportunity, driving 85 yards on eight plays to score the first touchdown of the game.

The big play of the drive came on a 23-yard pass from Martinez to Christoffersen, advancing the ball to the Whiteford 28. Martinez added a 19-yard scamper before Helton capped the drive with a five-yard touchdown run with 9:05 remaining in the second quarter.

Caleb Muskovin added the extra point to give MCC a 7-0 lead.

Whiteford responded in a big way with 2:37 left in the first half when quarterback Thomas Eitniear rolled to his left and broke loose for an 81-yard touchdown. The two-point conversion attempt failed, leaving MCC with a one-point edge.

“We got caught on their long touchdown run in a bad defense,” Czerwon said. “We got caught in a blitz and they kind of popped it. Give them a ton of credit because number 1 is a heck of an athlete over there. We almost caught him but we didn’t.”

The Crusaders drove to the Bobcats’ 15-yard line on their next possession, but turned the ball over with an incomplete fourth-down pass as the final seconds ticked off the clock.

Muskegon Catholic clung to a 7-6 lead at halftime. Martinez rushed for 87 yards in the first half for the Crusaders.

The Crusaders wasted no time gaining the upper hand in the second half.

They took the opening possession 56 yards on five plays to score their second touchdown just 1:16 into the second half. Helton opened the drive with a 16-yard run, then ended up by weaving through traffic for a 26-yard touchdown run.

Another extra point by Muskovin put MCC up 14-6.

“Not scoring before half was a little disappointing,” Czerwon said. “We came out and knew we were getting the ball to start the second half. We thought that going right at them was our best bet. We mixed in some quarterback drops and stuck to the game plan.”

After a Whiteford punt, the Crusaders struck again with a seven-play drive covering 44-yards to take a 21-6 lead. Martinez took control of the drive, turning in quarterback keeper runs of 11, 23 and nine yards, before scoring from five yards out with 3:08 left in the third quarter.

Muskegon Catholic added two more scores in the fourth quarter – a 25-yard shovel pass from Martinez to Scott, and an 8-yard run by Christoffersen, to wrap up the victory.

Muskovin was a perfect 5-for-5 in extra points.