Burns coached the Eagles years ago, but stepped away from the job when the Michigan High School Athletic Association switched the volleyball season from the winter to the fall back in 2007. 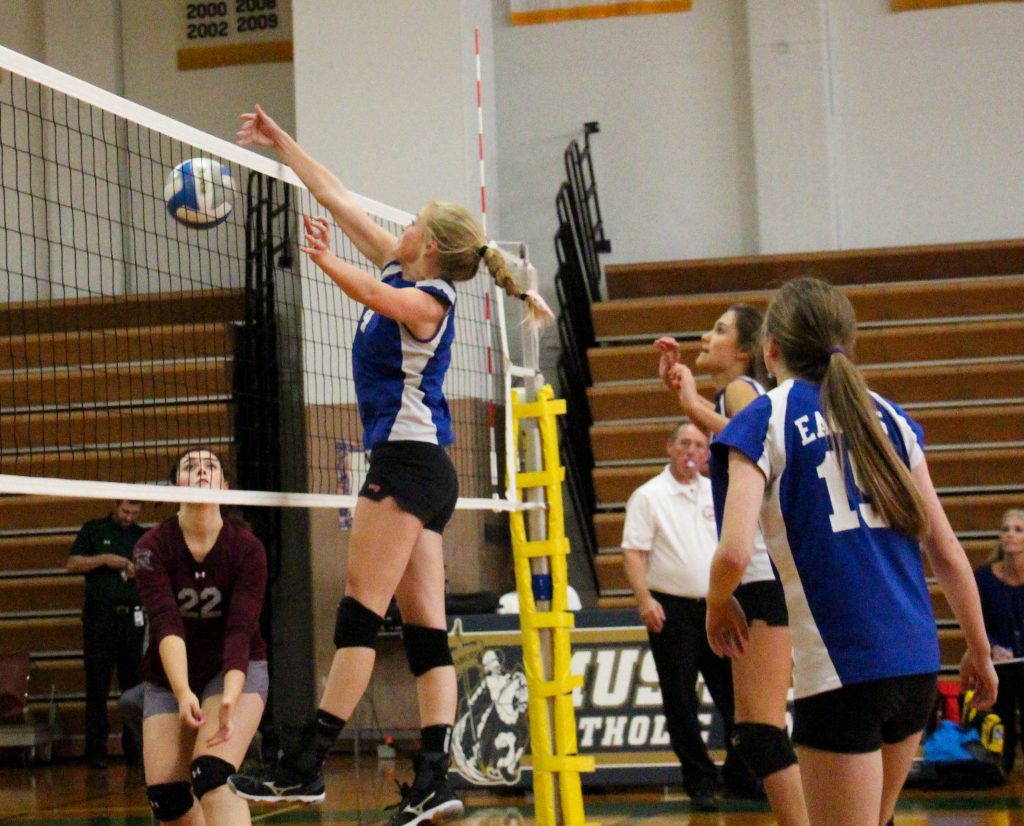 He returned to coach the varsity three years ago, after the previous coach stepped aside.

Through all of those seasons, in two different eras, Burns’ teams never made it through districts. Until Thursday, that is.

Fruitport Calvary Christian followed up on its stunning upset of Muskegon Catholic earlier this week with an impressive straight-set victory over Kent City Algoma Christian in the Class D district finals in Muskegon Catholic’s gym.

‘I coached for about six or seven years, then when they switched seasons I retired and started traveling a lot,” said Burns, 67, whose granddaughter, Marcia Schreur, is a freshman on his team. “Then I had more time and I came back four years ago to coach the junior varsity, then took over the varsity again three years ago.

“I knew this team had a lot of talent coming back this year. Some of these girls I had four years ago with the junior varsity. They have finally matured to the level where they are playing now. They are really good athletes who play really hard.”

It was not only the first district title for Burns, but the first district volleyball championship in for the school. The Eagles players were glowing with pride after the match, knowing they are now a permanent part of Fruitport Calvary Christian history. 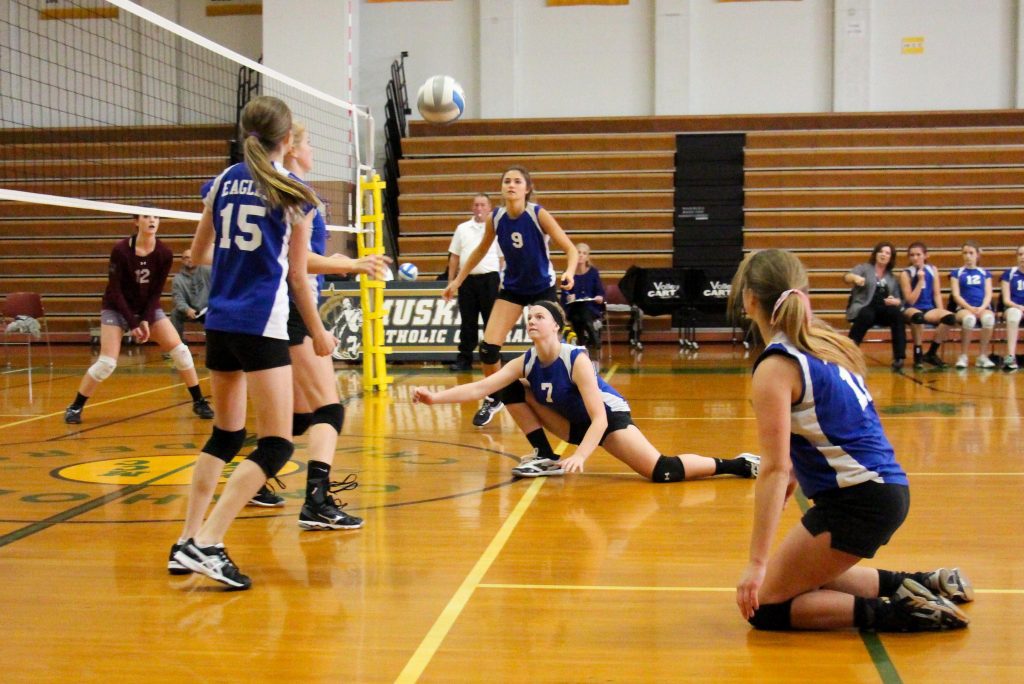 “It’s amazing,” said junior Madison Heiss, who led the team with 19 kills against Algoma Christian. “It’s just great for us to do something so special and be part of school history. We prepared for this. We practiced a lot.”

“We talked about this the whole season – and last season too,” said sophomore Audrey Vereeke, a team captain, who had 20 assists in the match. “We just wanted to go out and win it.”

Both Burns and Heiss said the team was wary of a letdown after Tuesday’s emotional victory over Muskegon Catholic, which had eliminated the Eagles – and won the district tournament – for the six previous seasons.

“We talked about that last night at practice,” Burns said. “I was confident they would come back and play well.”

“We knew we had to keep up the same intensity,” Heiss said. “We prepared mentally for this.”

The Eagles dominated most of the match against Algoma Christian.

In the first set they went from a 6-3 lead to an 11-3 advantage on a long service run by Jessica Assaad, which featured two aces by Assaad and two kills from Heiss.

They cruised to the 25-8 win from there. 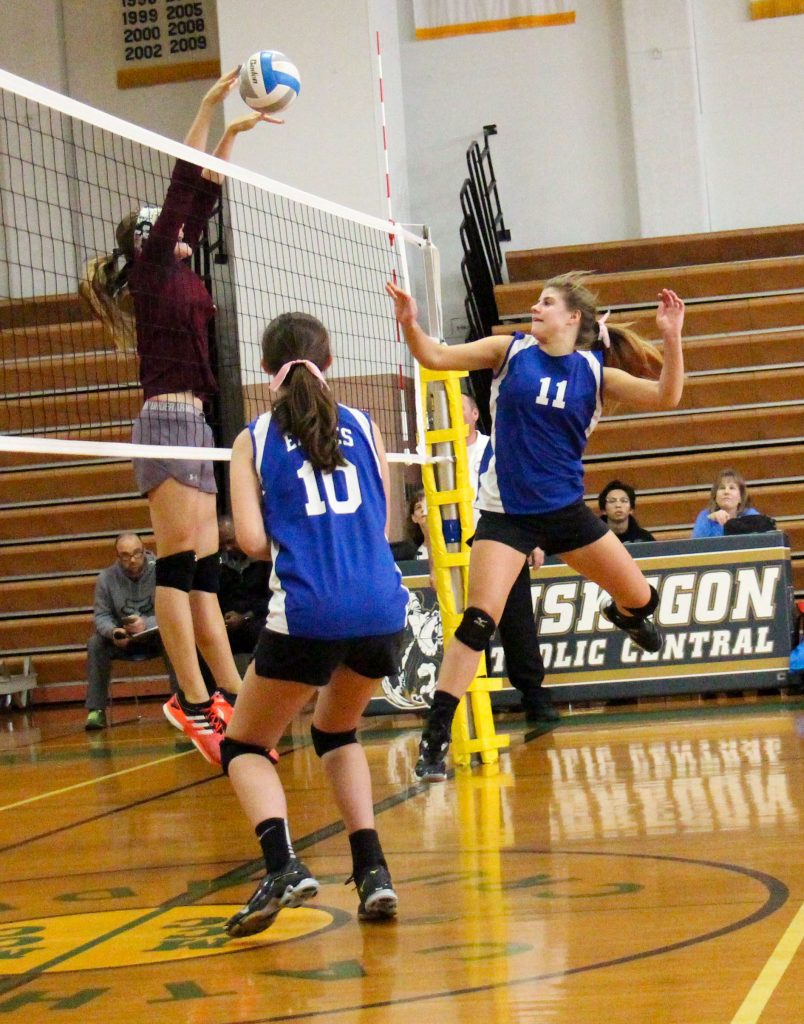 The teams played to a 4-4 tie early in the second set, and Fruitport Calvary only led 11-8 at one point. But then the Eagles turned on the jets, outscoring Algoma 14-4 the rest of the way. Heiss had three kills during the decisive run while Rebekeh Kozicki added two.

The third set was close for a while, with the teams playing to a 7-7 tie. Then the Eagles pulled ahead with a nine-point service run by Kyleah Sutherland, who capped off the spurt by serving three aces in a row.

Algoma Christian fought back, cutting Fruitport Calvary’s lead to 19-16, but the Eagles then scored five straight points to pull ahead 24-16. The Knights answered with four straight points, but Weiss sealed the set, match and championship with a soft tip that fell in for the final point. 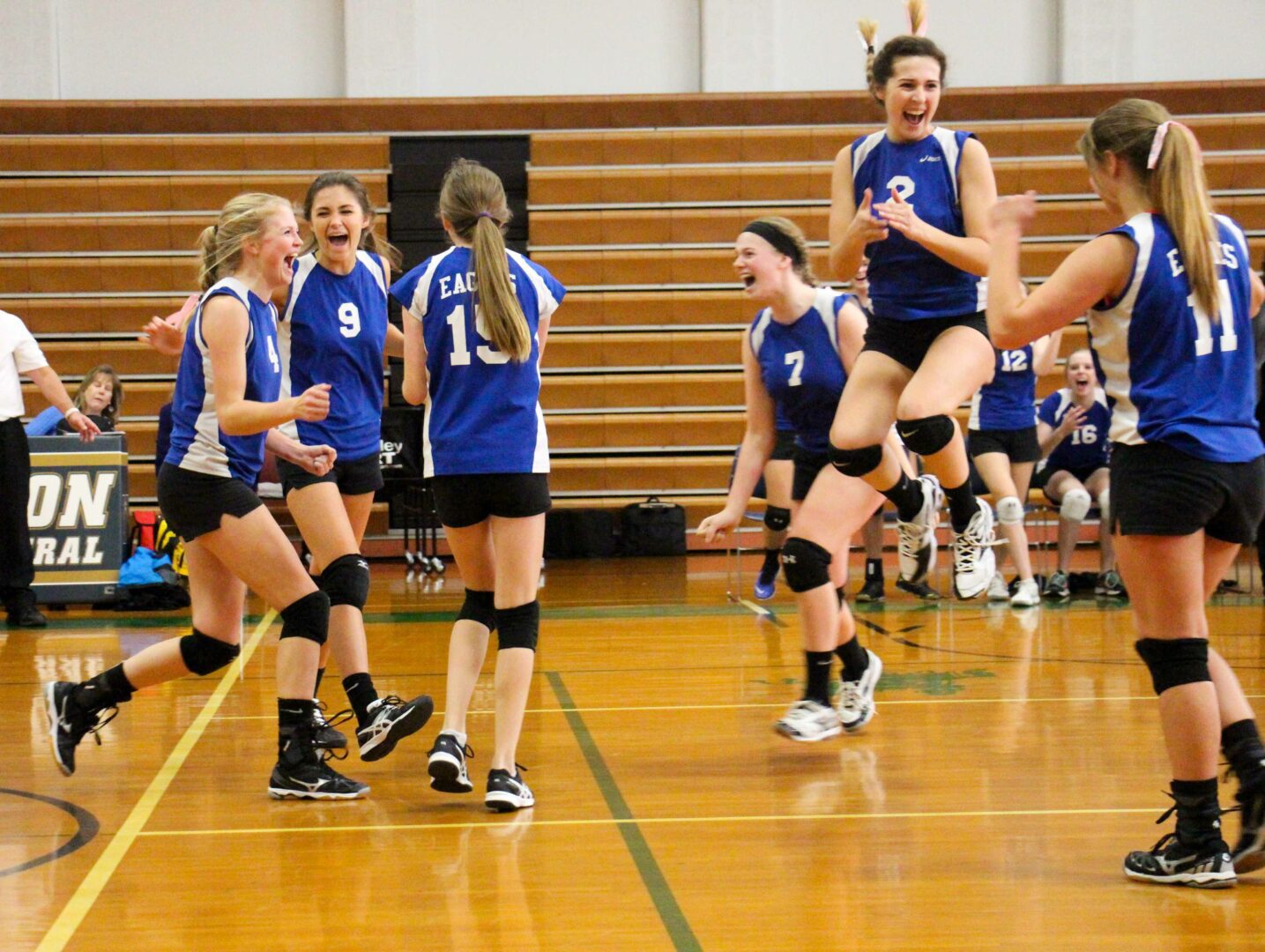 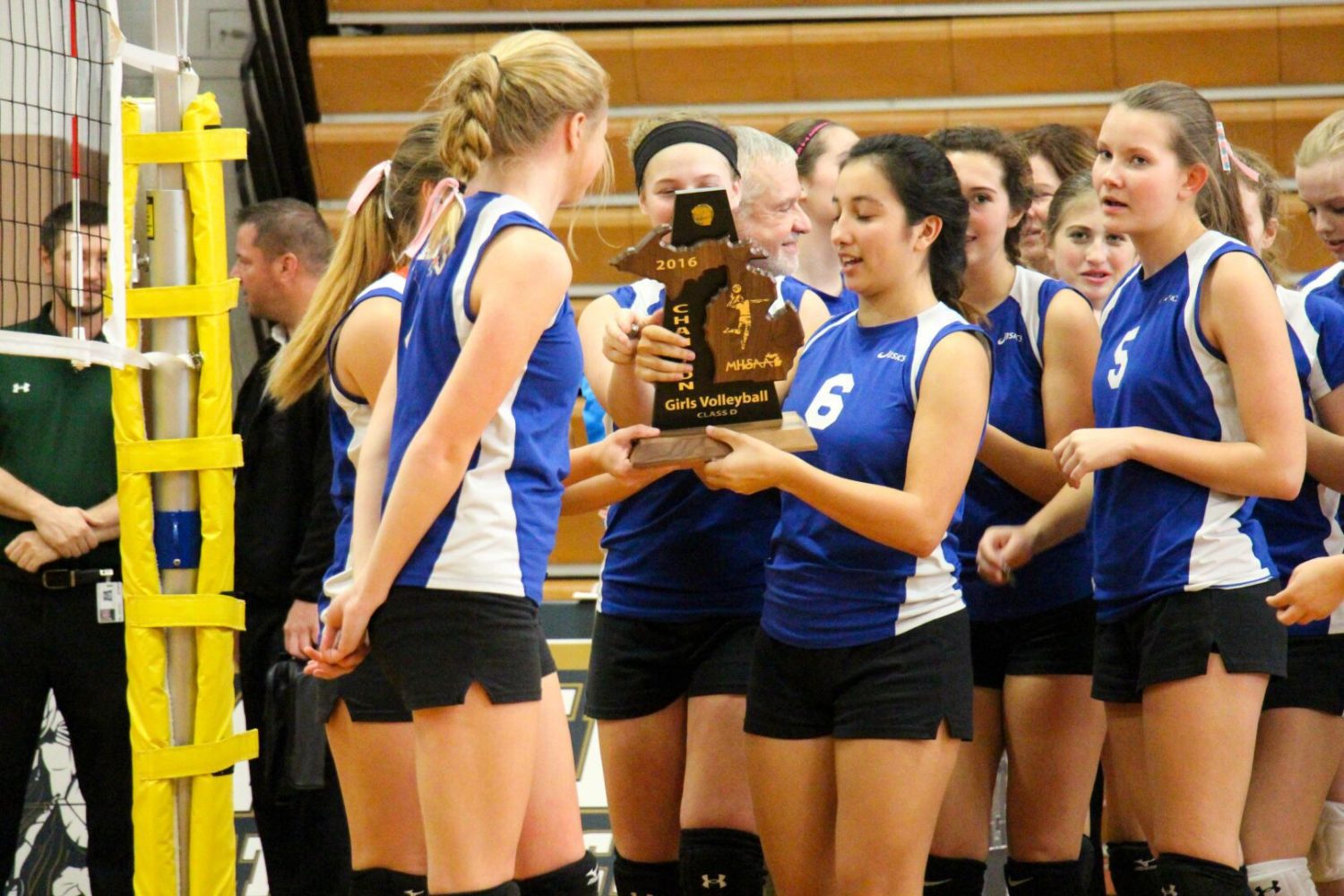 No. 6 Kyleah Sutherland holds the trophy as her teammate look in awe. Photo/Jason Goorman 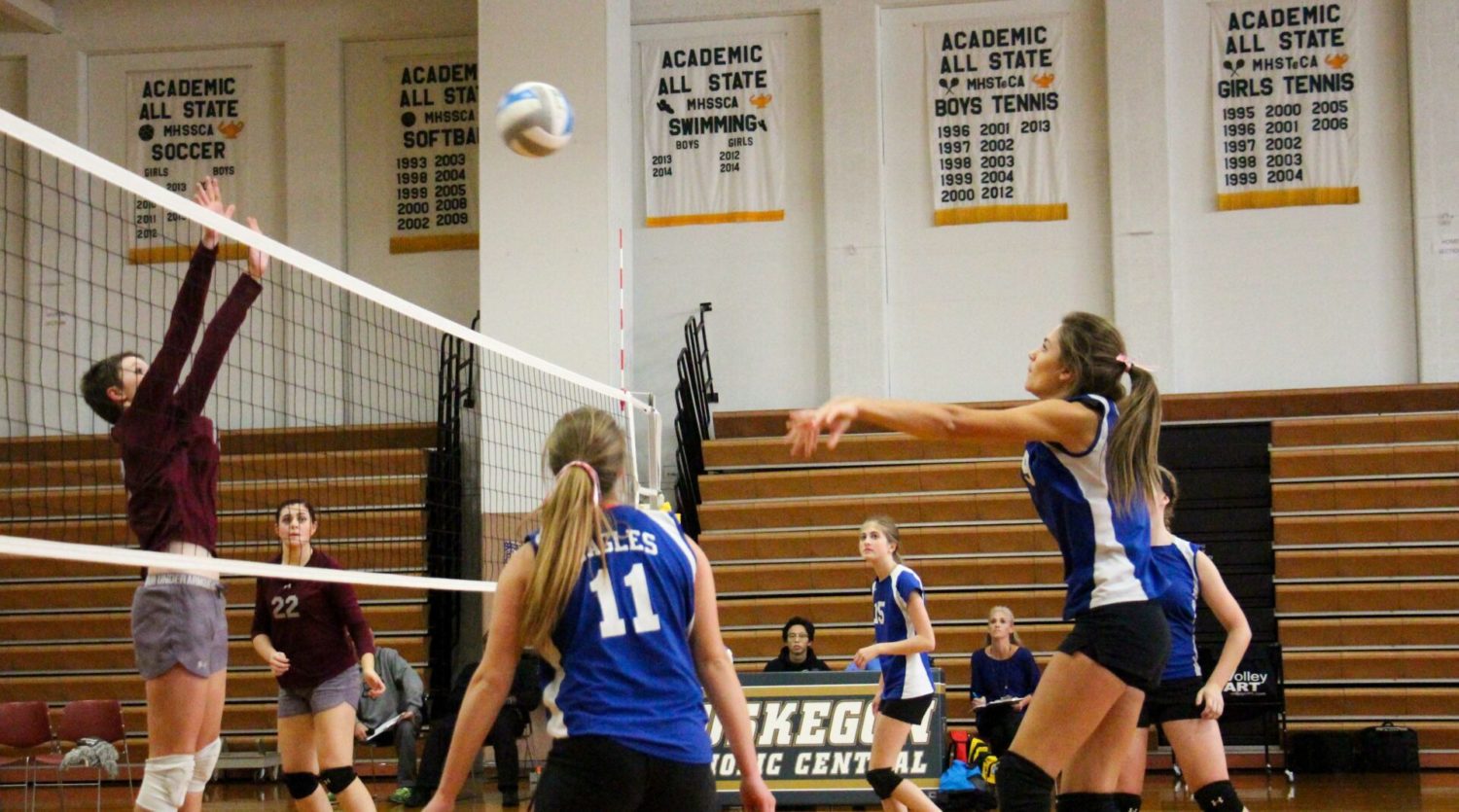 Ally Richards does a quick set over the net for the Eagles. Photo/Jason Goorman 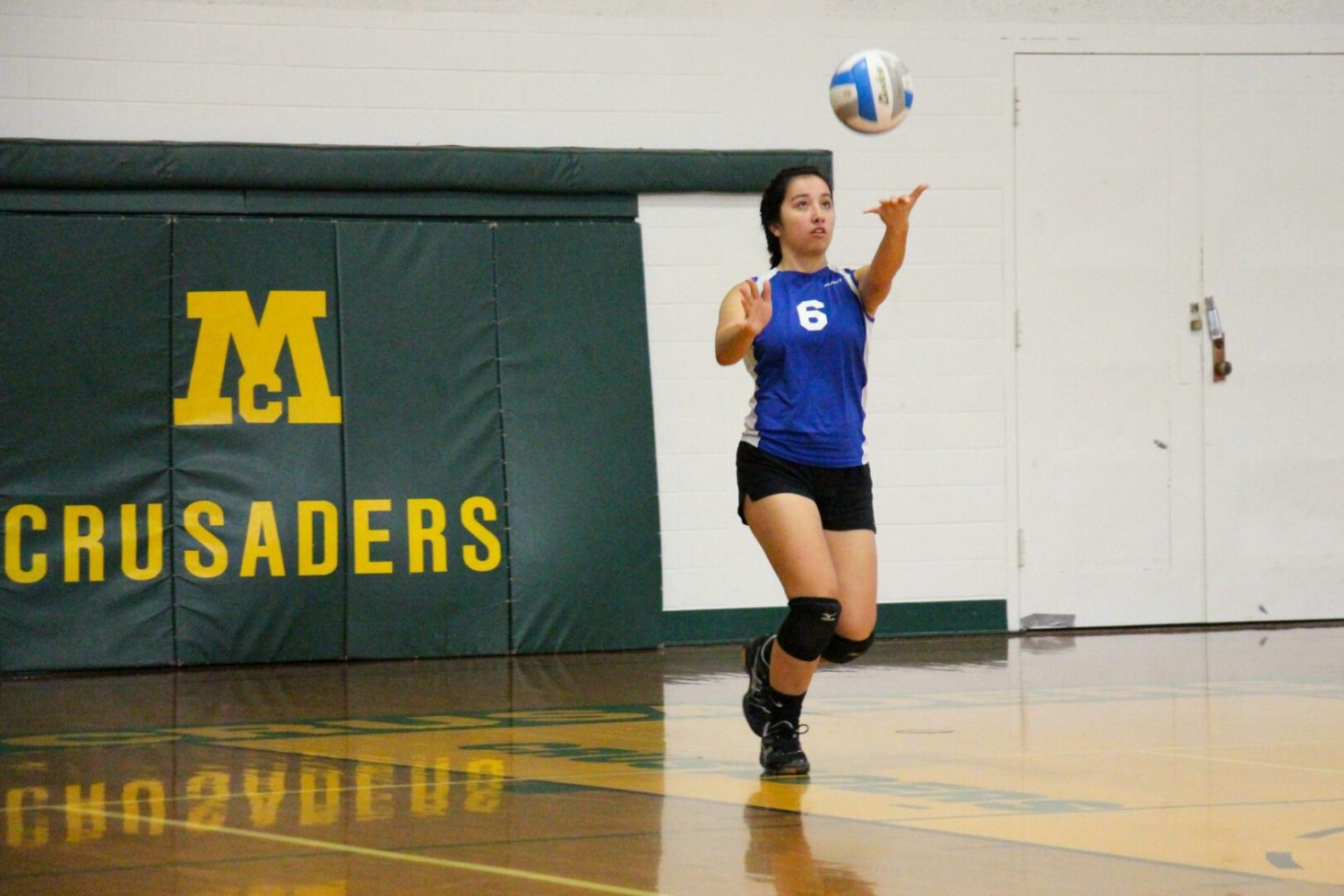 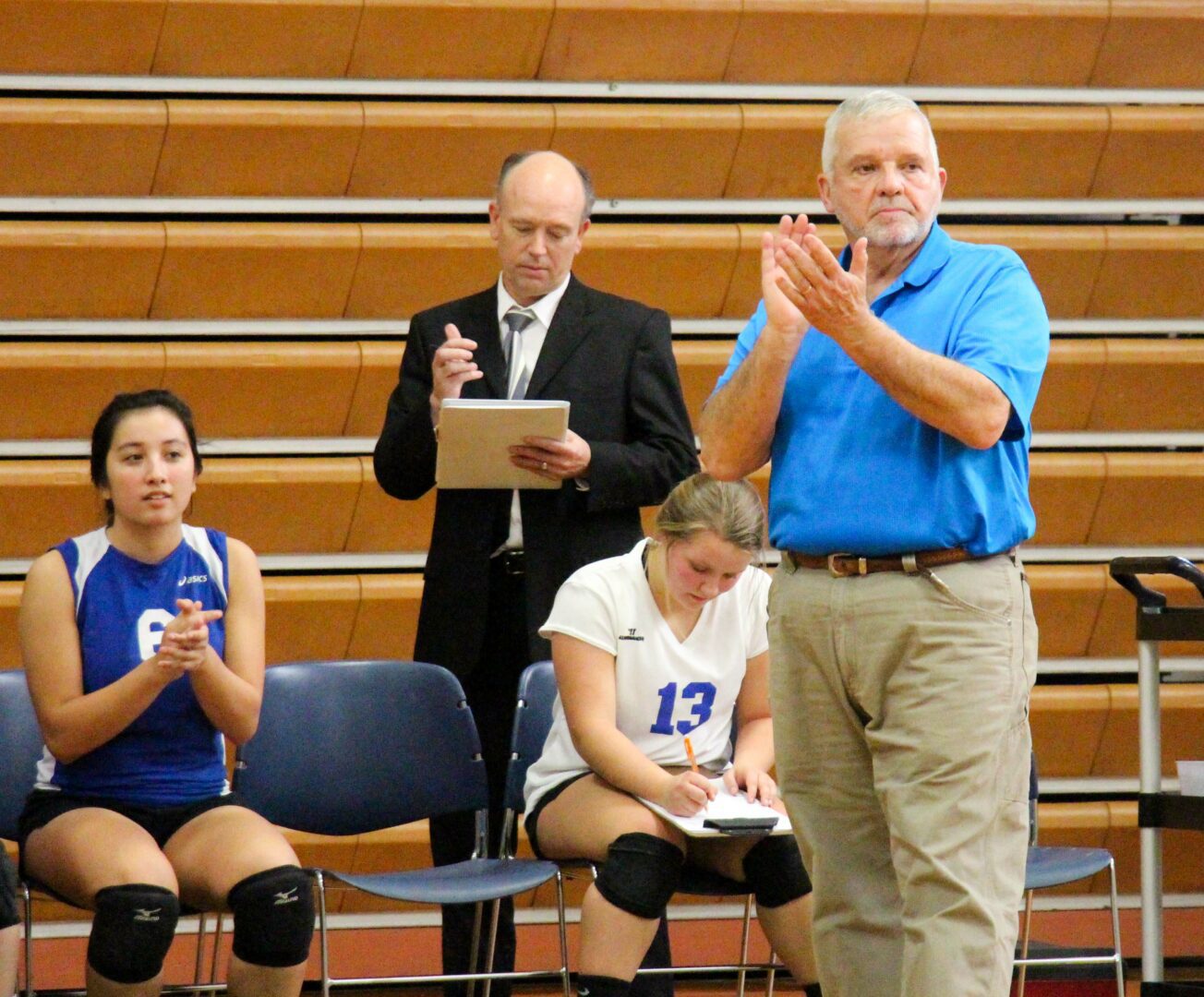 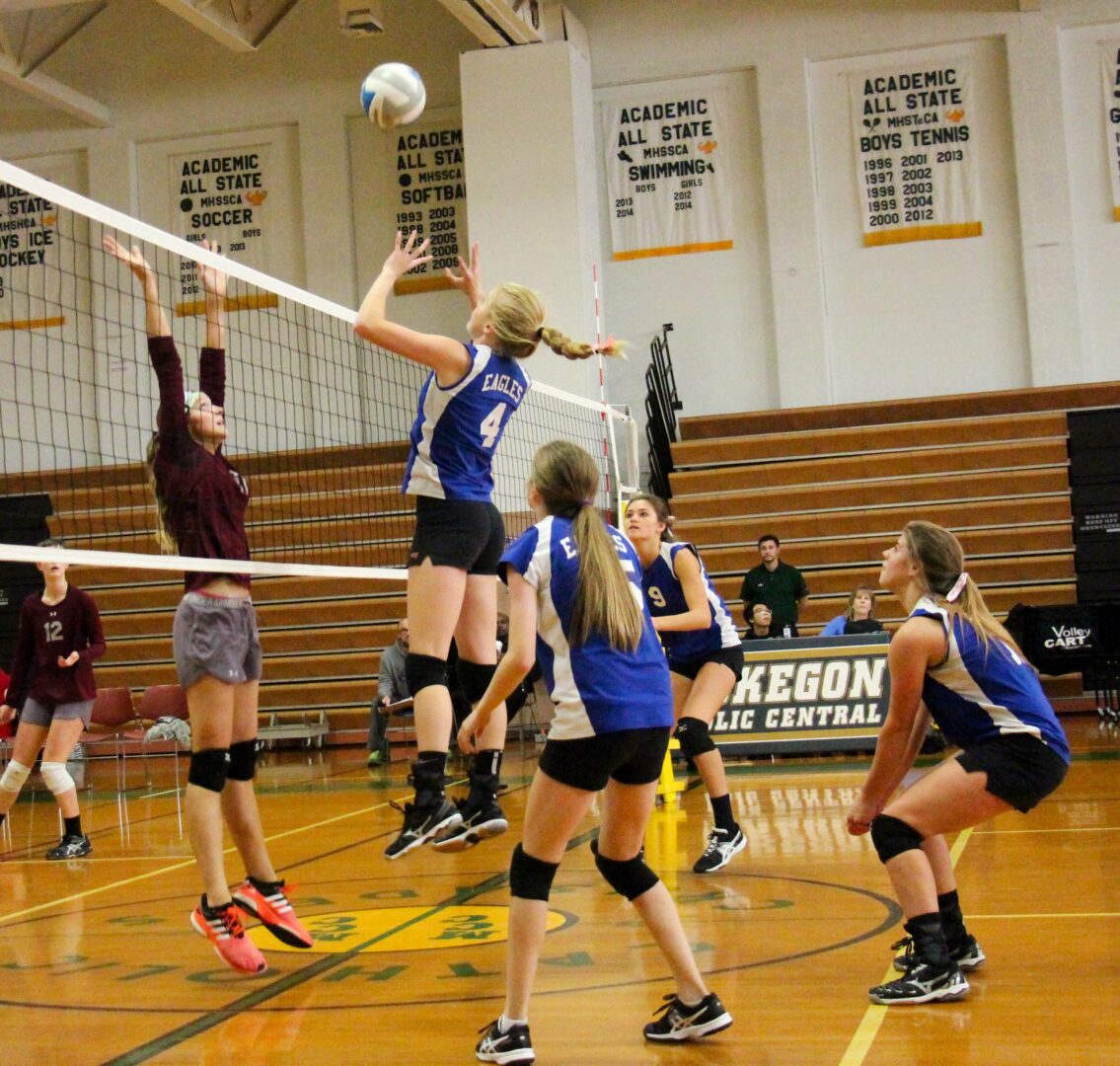 No. 4 Madison Heiss lofts the match-winning shot over the Algoma net. Photo/Jason Goorman