HUDSONVILLE – The Grant volleyball team had a storybook season in 2016, and rewrote the school record books in the process.

But the story ended on Tuesday night when the Tigers lost in three straight sets to Buchanan in the Class B state quarterfinals at Hudsonville Unity Christian High School.

The Tigers came out strong in the first set and appeared to be on their way to taking a lead in the match. 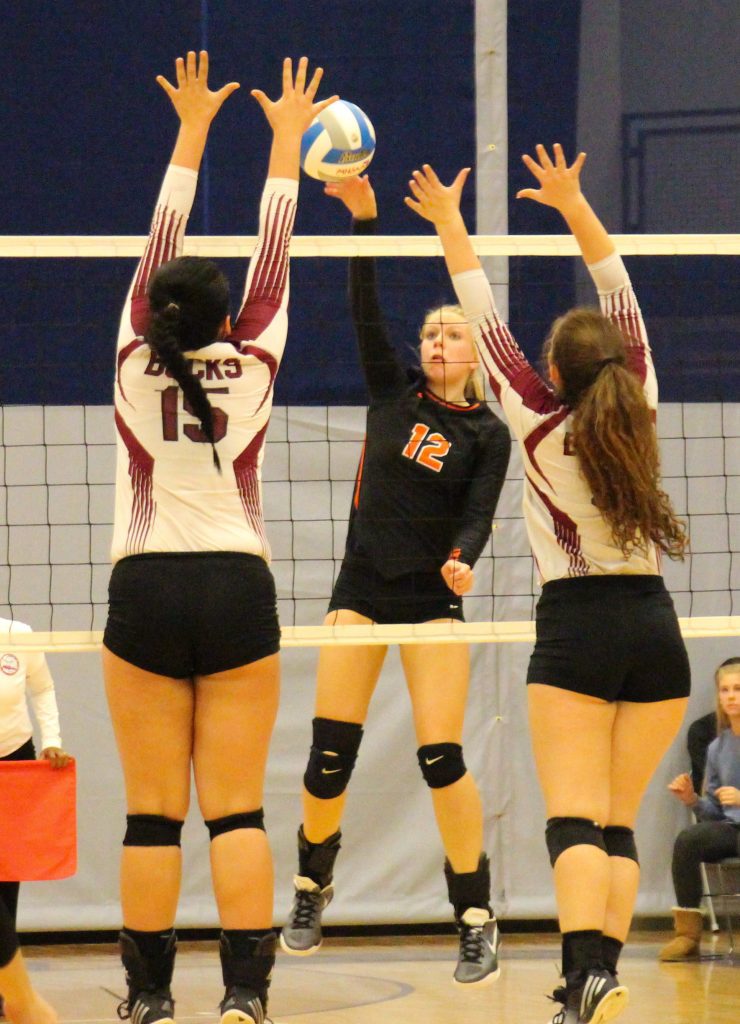 Grant’s No. 12 Laura Bouwkamp gets the hit over Buchanan the net. Photo/Jason Goorman

But Buchanan stormed back with five straight points, including three straight kills from senior Alex Tobler, to take the set 26-24.

The Tigers never fully responded and eventually lost the last two sets, 25-14 and 25-17.

“The momentum absolutely shifted,” said Grant head coach Tricia Schuitema. “We struggled all night with serve receive and we struggled to relax and get the ball where we needed to.

“They have a great team and some really good hitters who put a lot of pressure on us. I mean our girls battled and fought, but played a little hesitant and uptight.

“We knew they’d be good. I’ve seen video and we were aware of what they had and what they were capable of. They have great players and a great team.”

The Tigers were led by Laura Bouwkamp with eight kills while Kylie Patton had seven. Ashley Herin added 20 digs for Grant while Sierra Schuitema had 20 assists.

Grant finished the season with a 50-11-1 record, as well as a Central State Activities Conference division championship, a district title and a regional championship.

Coach Schuitema said she couldn’t be more proud of the season her team had.

“It’s been awesome,” she said. “I heard someone say this is the first time since 1948 that a team from Grant has been in a quarterfinal. This team has done a great job all season and showed terrific teamwork. It’s been great for our community and the school.”

Buchanan was led by Tobler with 11 kills and six aces while outside hitter Franki Strefling added 18 kills and two aces.

Buchanan will next travel to Battle Creek to take on North Branch in the Class B state semifinals on Thursday at 5:30 at Kellogg Arena.