MUSKEGON – The Mona Shores girls basketball team bowed out of the state tournament last year in the regional finals, and the Sailors felt like they could have done better.

With the core of that team returning this season – led by Miss Basketball hopeful Jordan Walker – Mona Shores again has its sights set high. 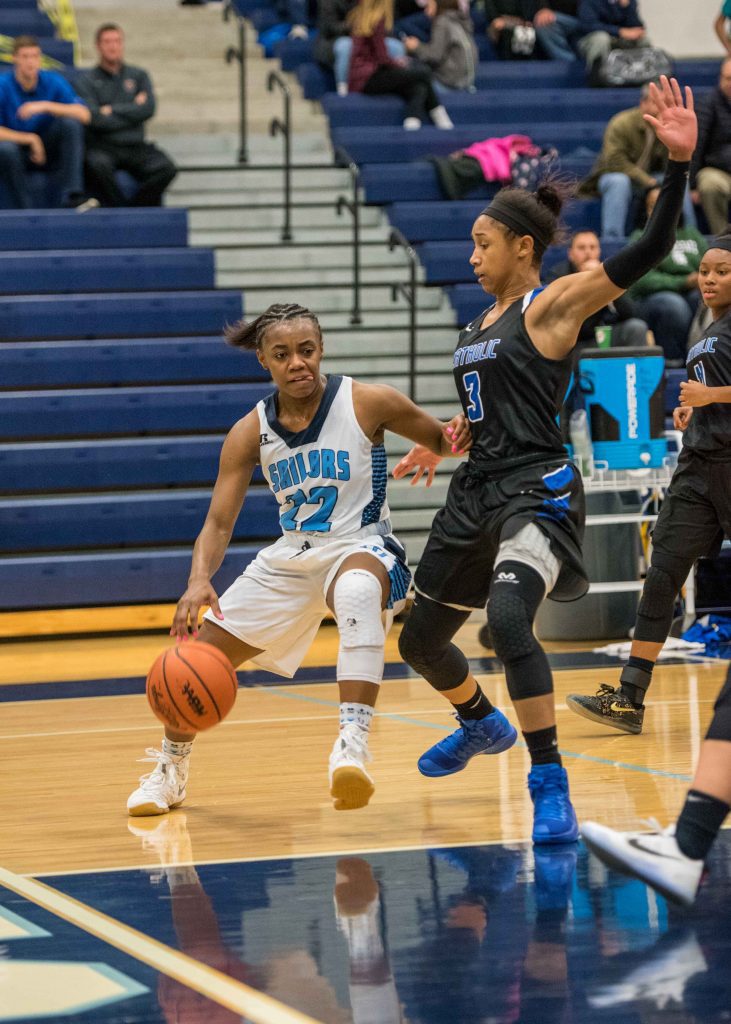 To be the best, you have to play the best, and the Sailors opened the season on Tuesday against Grand Rapids Catholic Central, which is ranked high in preseason state polls.

They were up to the challenge, pulling out a 59-52 victory on their home court.

“This (mindset) started last April, when we made a decision to go out and schedule the toughest (opponents) we could,” said Mona Shores Coach Brad Kurth. “I really don’t feel we played that well tonight. Catholic is a great team and they’re very well coached.

“We made some young mistakes with our young kids tonight. They didn’t play their best game, but if we can play and beat the sixth-ranked team in the state when we’re not playing our best, I think they says a lot about our kids’ character.”

Walker picked up where she left off last season, scoring 33 points on 11-for-15 shooting while pulling down 15 rebounds and dishing out three assists.

“That’s a Miss Basketball performance right there,” Kurth said about his senior point guard. “There’s nobody else in the state that’s doing that offensively and defensively. A point guard getting 15 rebounds in a game, it was an amazing performance.”

Neither team could gain separation throughout a back-and-forth first half. Shores led 15-12 after the first quarter and GRCC was up 23-21 at halftime. 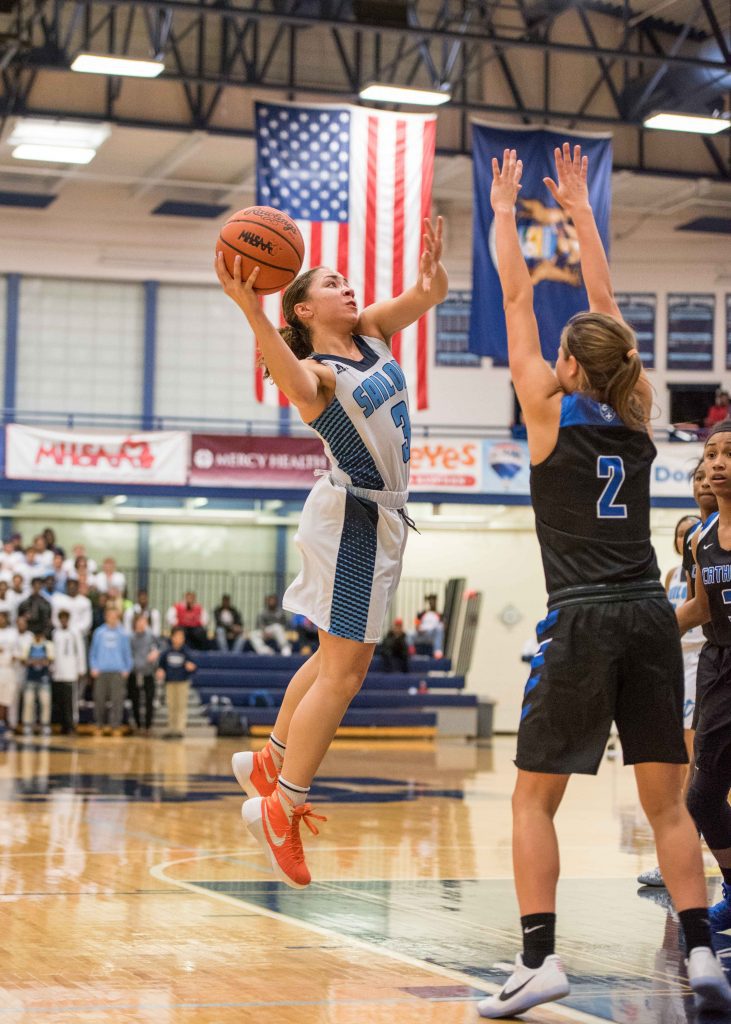 Alyza Winston (3) puts up a shot off the drive. Photo/Eric Sturr

The Sailors took the lead 29-26 midway through the third quarter, and did not trail again despite missing some free throws down the stretch.

The Sailors hit just nine of their 17 fourth quarter free throws and just 12 of 24 overall.

GRCC’s Sophia Karasinski scored 14 of her team-high 17 points in the second half, but none of the other Cougars stepped up and Shores was able to key on her defensively.

“Honestly, it wouldn’t have been that close if we could have made a free throw in the fourth quarter,” Kurth said.

DeeDee Trotter scored 10 points for the Sailors while Cromwell (11) and Kyra Bussell (10) hit double- digits for the Cougars.

“So many of our kids have so much more,” Kurth said. “It wasn’t a great performance for most of our kids. We’re playing these games for a reason. We’re going to see what we have in us and what more we have to give.

“I’m really excited about our future, and we have a lot more that we can do.”

The Sailors hit the road this Saturday to pay defending Class C state champion and No. 1 ranked Ann Arbor Prep. 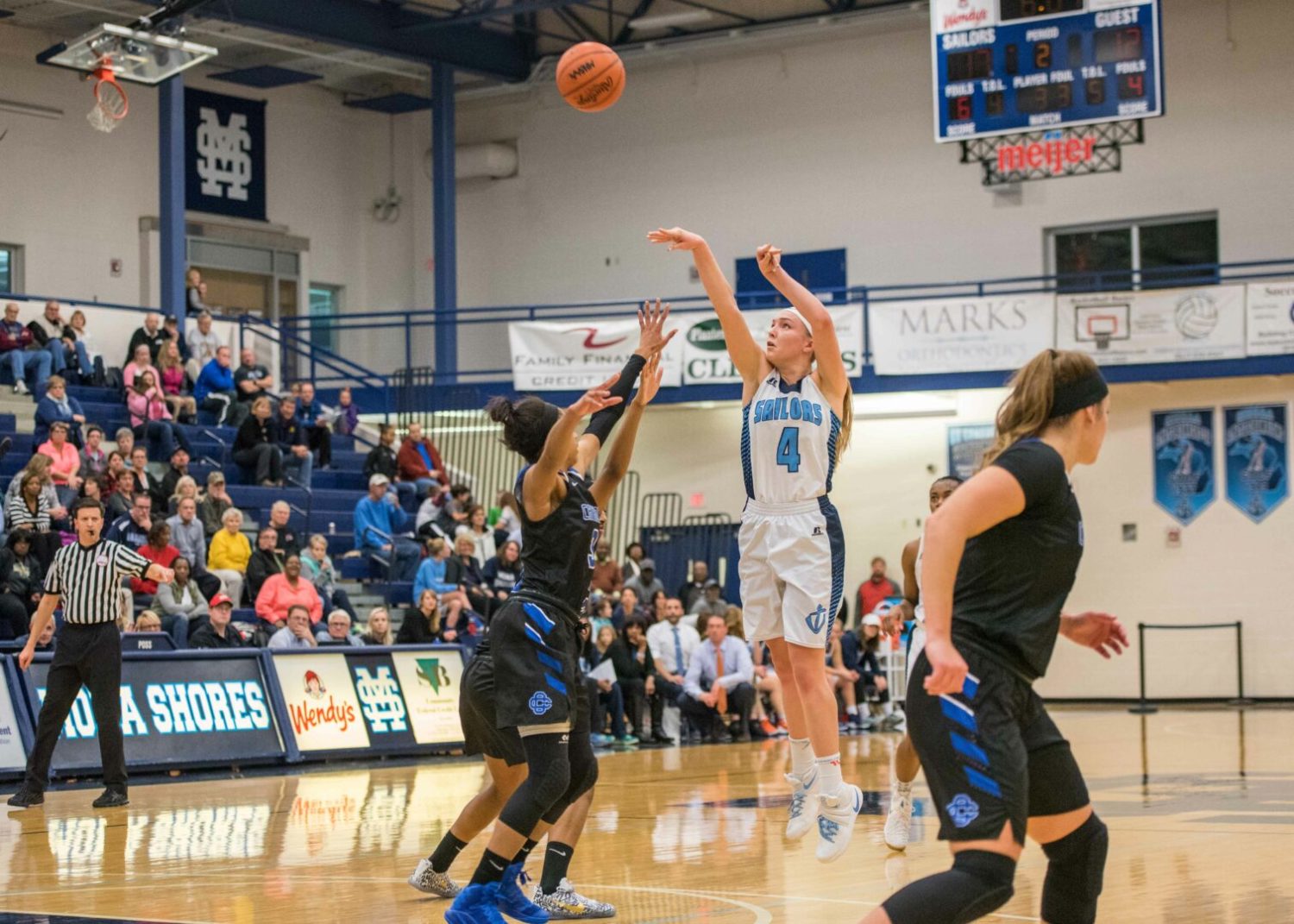 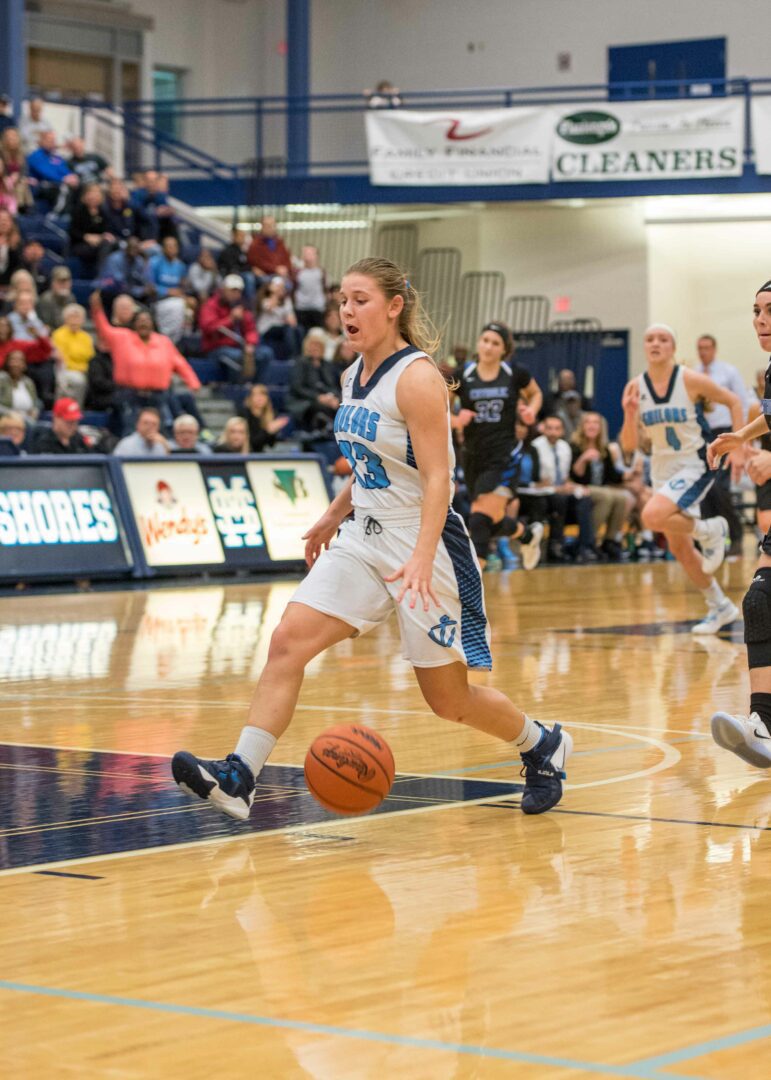 Taylor Strandberg take the ball in for a layup after a steal on the defensive end. Photo/Eric Sturr 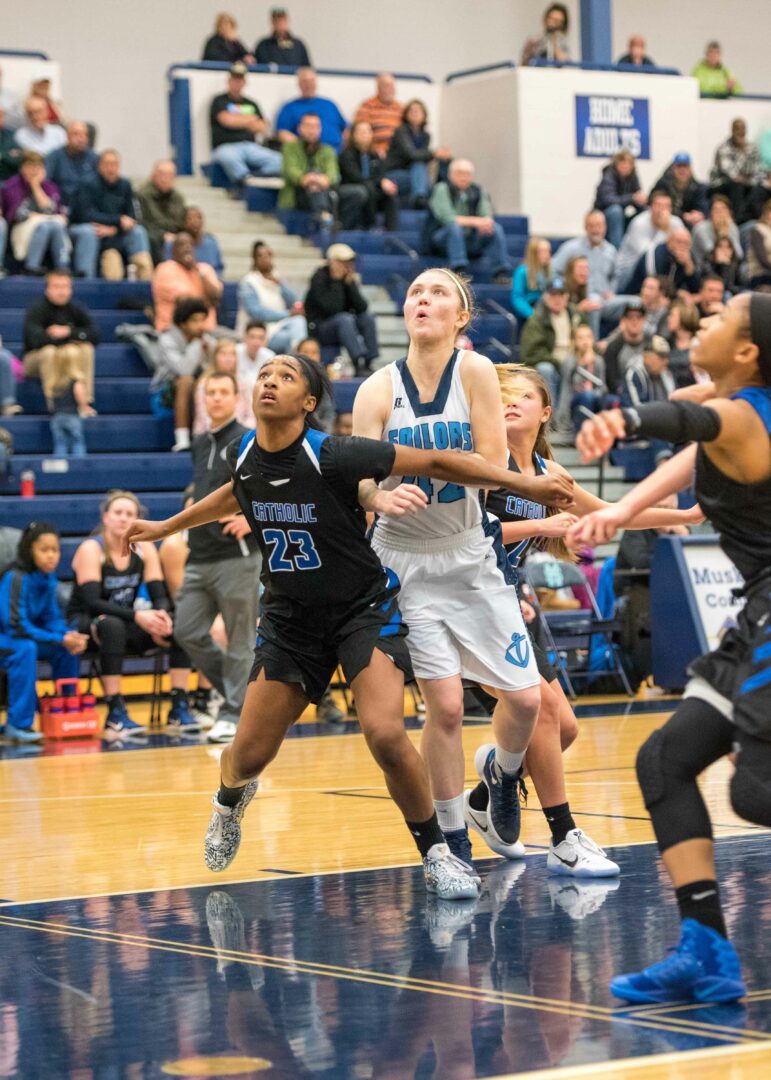 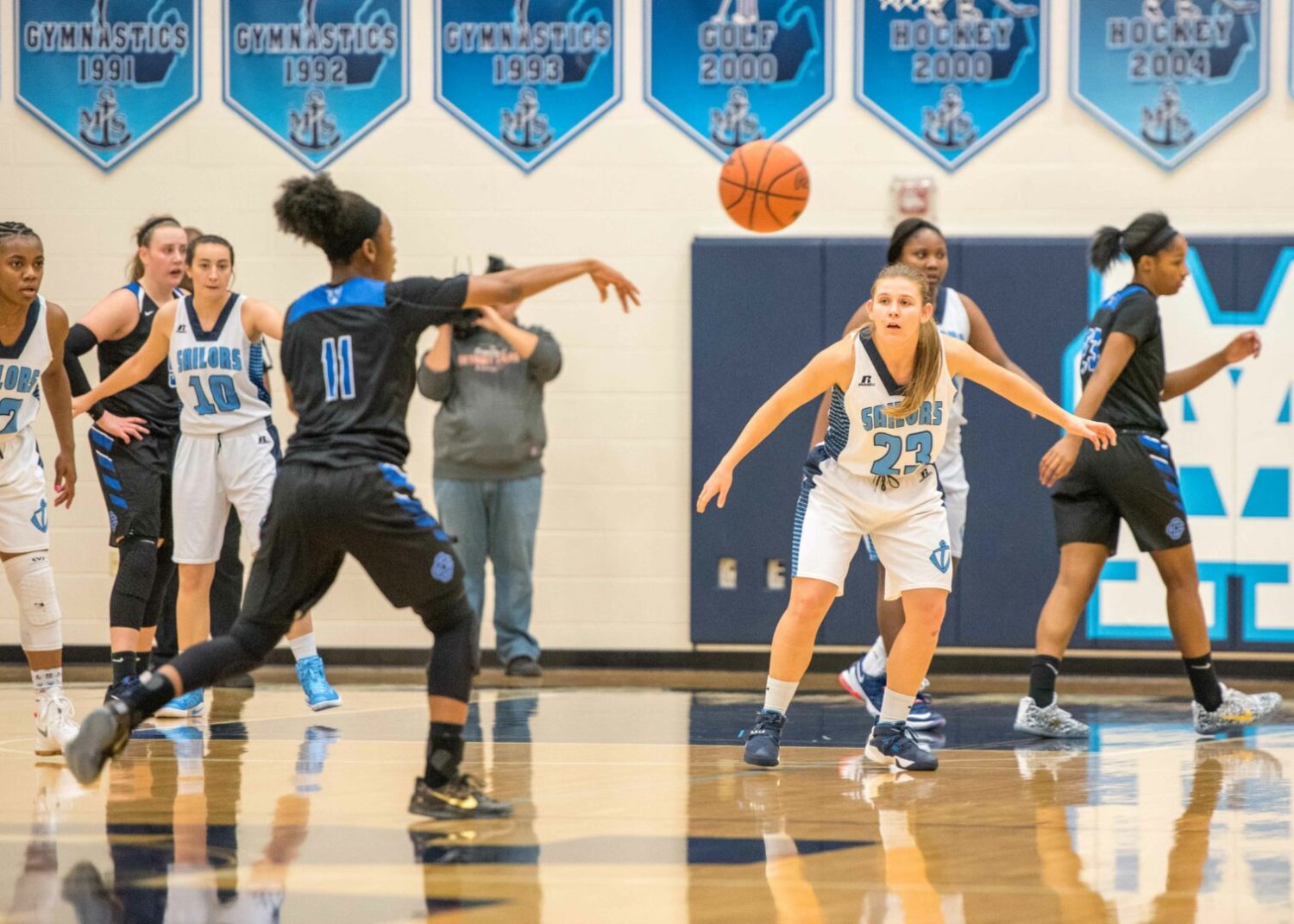 Taylor Strandberg (23) guards the top of the key for Mona Shores. Photo/Eric Sturr

Lumberjacks fail to capitalize on opportunities, drop a 2-1 decision to Tri-City in the weekend opener 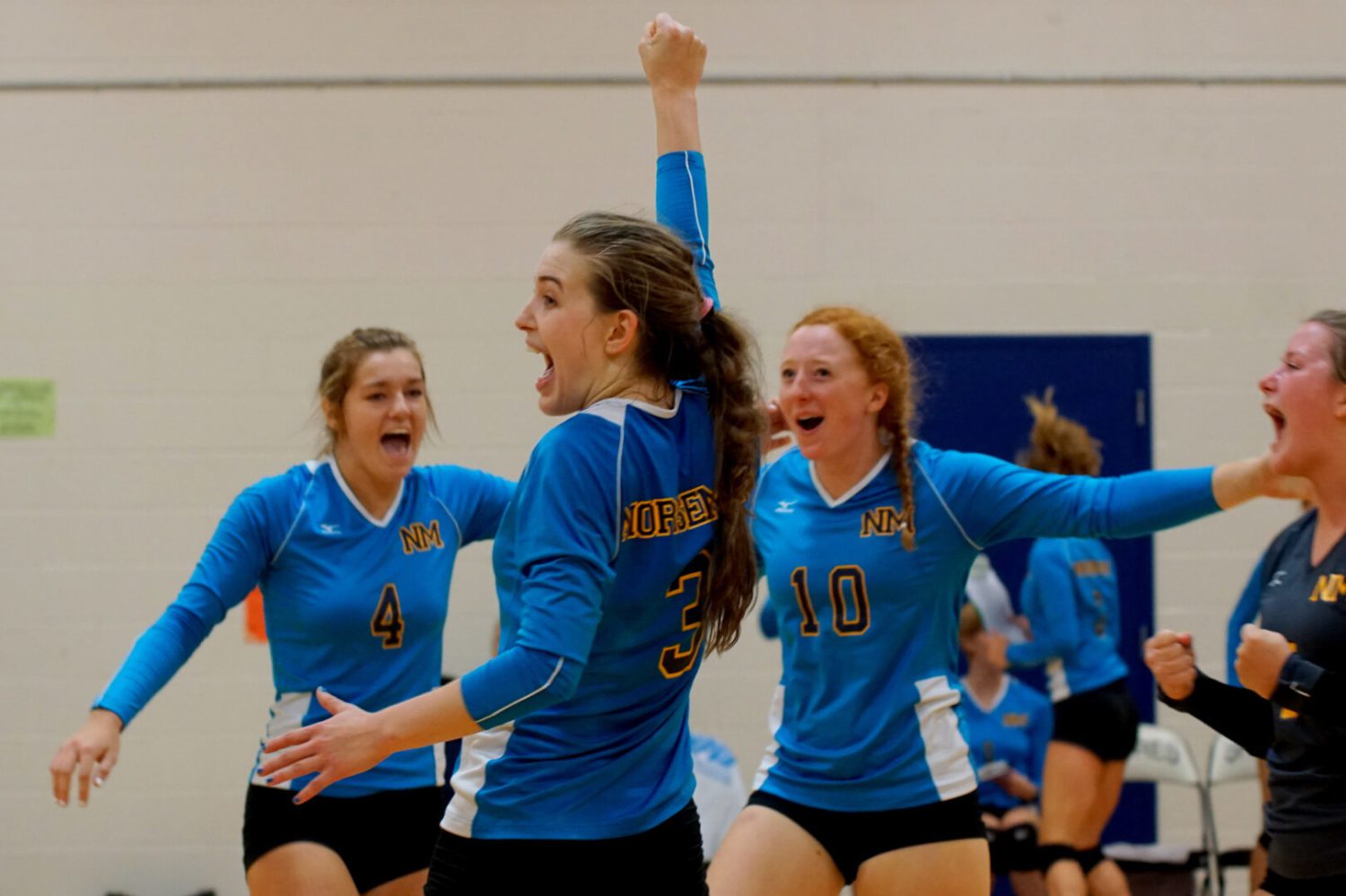