MUSKEGON – The Muskegon Lumberjacks picked up forward Will Smith just before the season began, to add some experience and scoring punch to the roster.

They were certainly glad he was around on Saturday night, when he scored his biggest goal of the season so far to help Muskegon complete a comeback victory.

The Lumberjacks were on the verge of having a very silent, two-loss weekend against the Dubuque Fighting Saints on the road.

After falling to the Fighting Saints 2-1 on Friday night, Muskegon trailed 2-0 midway through the second period on Saturday night.

Collin Adams and Marc Del Gaizo each notched late second-period goals to even the score at 2-2.

Smith completed the rally with the game-winning goal with only 1:58 left in regulation.

“Bo (Hanson) took a shot from the point and the rebound came to me and I was lucky enough to put the puck in the net,” Smith said about his big goal. “It’s a great feeling to get the game-winning goal, especially late in a game.” 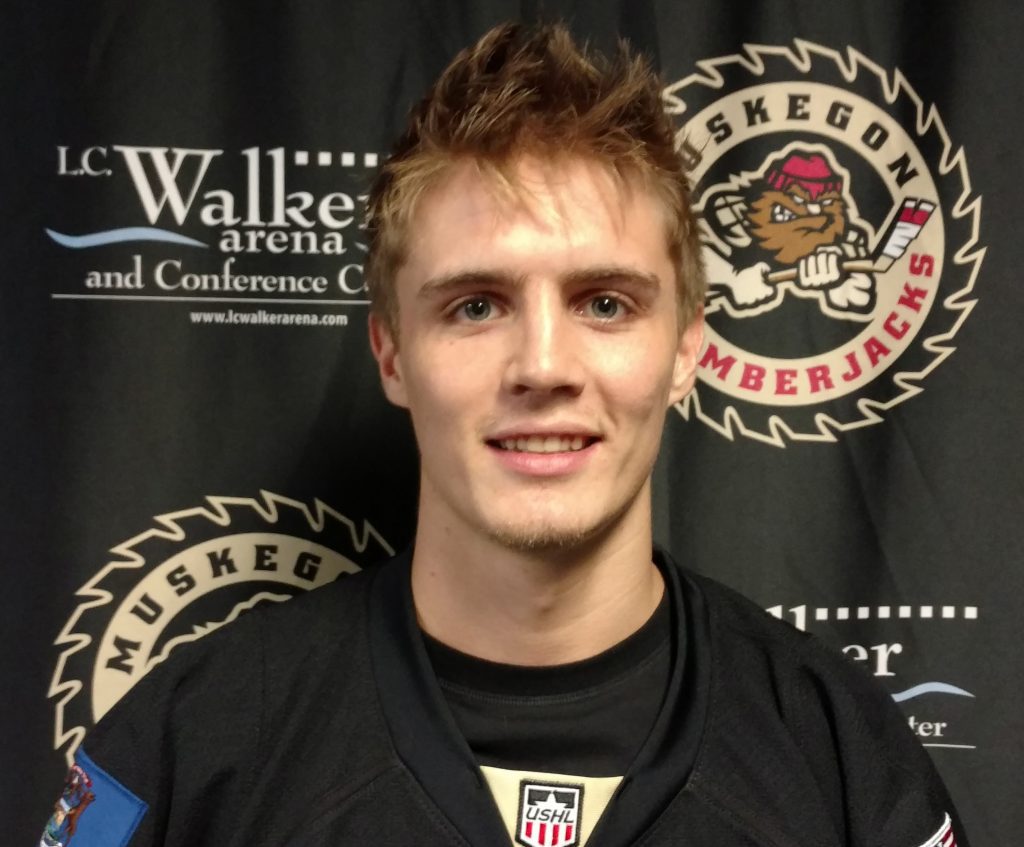 The Lumberjacks are now 9-5 on the season. They will return to the L.C. Walker Arena this weekend, hosting the Cedar Rapids RoughRiders on Saturday at 7:15 p.m. and the Madison Capitols on Sunday at 3:15 p.m.

Smith, 20, who is from Longmeadow, Massachusetts, currently has three goals and three assists in his first 12 games for the Lumberjacks.

He comes with an impressive resume.

Smith spent the last three seasons in the elite Quebec Major Junior Hockey League, playing for the Moncton Wildcats. In 193 games with the Wildcats, he scored 39 goals and picked up 46 assists for a total of 85 points.

Smith was hoping to wrap up his junior career in Moncton this season, but was a last-minute cut in training camp, due to the presence of too many 20-year-olds on the roster.

“Will has speed and is very quick to the puck,” LaFontaine said. “He is a smart player who is getting more confident as the season progresses. He came to Muskegon with a lot of experience, and l love how he’s been driving to the net.”

Smith was thankful to be picked up by the Lumberjacks after losing his spot in Moncton.

“I loved it there,” said Smith, who said he hopes to sign a professional contract, or perhaps play college hockey in Canada, when his junior eligibility expires after this season. “I was disappointed that I had to leave, but surprised at how well Muskegon runs its organization.”

The Lumberjacks have had their troubles on the power play this season.

The Lumberjacks have been particularly bad with a one-man advantage over the last five games, going 0-for-15.

The Jacks’ last power play goal occurred on Oct. 22 against Waterloo, when they scored two.

Lafontaine said the team is making progress on the power play, but more work is obviously needed.

“We as coaches need to get the guys on the same page,” LaFontaine said. “We’ve been getting more chances with pucks to the net and have improved on moving without the puck, instead of standing around on the power play.

“Luckily we have managed to win some games despite our power play struggles.”

On the bright side, the Lumberjacks have improved on their penalty killing, allowing just one power play goal in 22 shorthanded situations over the last seven contests.

Muskegon has moved up to seventh in the USHL in penalty killing, slaying 86 percent of its opponents’ chances.

The Chicago Steel remain at the top of the USHL’s Eastern Conference with 22 points, despite going winless in the last three games.

Muskegon is currently in third place with 18 points, two points behind the second-place Green Bay Gamblers.

Cedar Rapids, usually a top team in the USHL, is having a rough season. The RoughRiders are winless through 13 games with a 0-11-2 record.