MUSKEGON – The Muskegon Lumberjacks came perilously close to allowing struggling Cedar Rapids to win its first game of the season – and disappointing a big home crowd in the process.

But Andrei Svechnikov and Bo Hanson didn’t let it happen.

Svechnikov tipped in a shot from the point midway through the third period, allowing the Jacks to tie the game with Cedar Rapids, which came in with a woeful 0-12-2 record.

Then Hanson blasted a close-range shot into the Cedar Rapids goal with 5:42 left in the game, allowing Muskegon to pull ahead en route to a 4-2 comeback victory on Saturday in front of 3,837 fans at L.C. Walker Arena.

The Jacks have now won six of their last eight games. They are 10-5 on the season, good for third place in the USHL’s Eastern Conference. They will host Madison on Sunday at 3:15 p.m. in a special matinee game.

“We’ll take it,” said Lumberjacks Coach John LaFontaine. “Penalties got us into a little bit of trouble. We just couldn’t get into a rhythm where we had any kind of forechecking going. We just weren’t playing together. 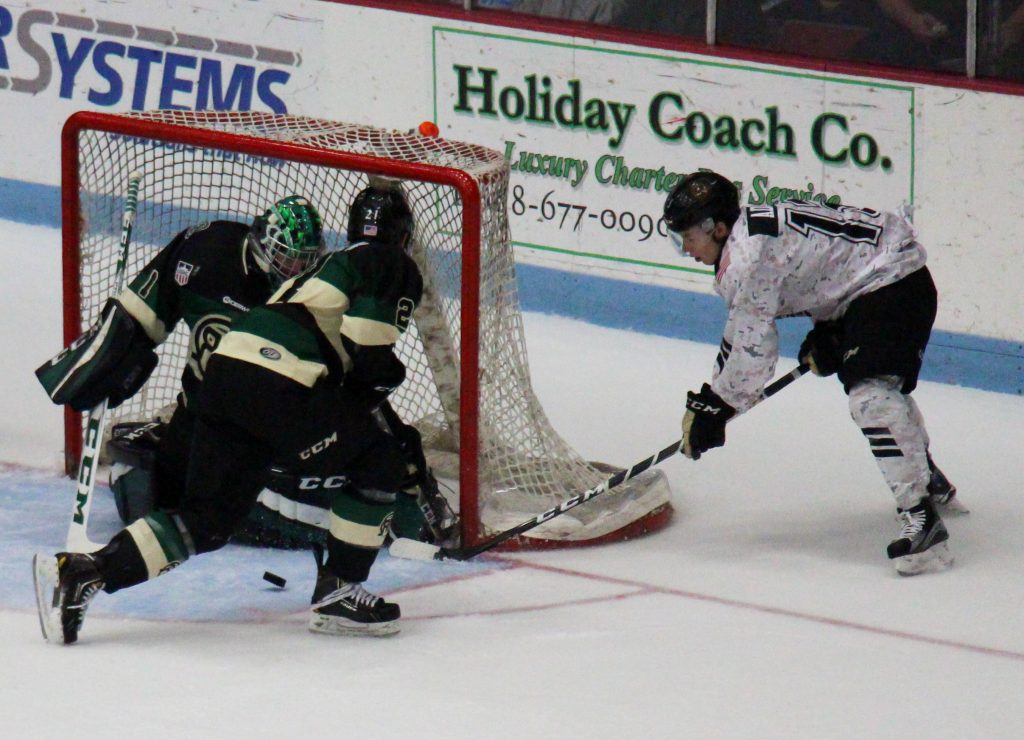 Collin Adams nearly completes the wrap around shot for the Lumberjacks. Photo/Jason Goorman

“Our game is to get up and get in their face and be more aggressive, and we started getting better at that in the third period.”

Hanson’s goal was more than just the game-winner for Muskegon – it also broke a long scoring slump for the Lumberjacks’ power play unit. Muskegon was 0-for-15 with a man advantage over the past five games.

“We did not want to give them their first victory,” said Hanson, who finished with a goal and two assists and was the No. 1 star of the game. “We came out a little slow but we found a way to come out in the third and really gave it to them.”

While Hanson and Svechnikov provided the late offensive heroics for the Jacks, it was goalie Adam Brizgala who kept them in the game for two periods while the offense was struggling.

“He made two or three breakaway stops,” said LaFontaine. “He was phenomenal, and good for him. He’s been gaining a lot of confidence.”

The RoughRiders opened the scoring on a goal from Jason Polin just 1:02 into the contest. Cedar Rapids maintained its one-goal advantage through the opening period, outshooting the Lumberjacks by a 17-10 margin.

Most of the second period was scoreless until the Jacks tied the game at the 17:51 mark, when Anthony Del Gaizo deflected a Jordan Timmons shot to tie the game 1-1.

Timmons and Will Smith were credited with assists.

Cedar Rapids regained its lead with 4.2 seconds left in the second period with a power play goal from Steven Agriogianis.

Svechnikov tied the game at 2-2 at the 7:32 mark of the third period when he deflected a shot from Zach Berzolla into the net. Berzolla and Hanson had assists.

Hanson scored his game-winning goal with 5:46 left in regulation to give Muskegon a 3-2 advantage. Collin Adams, who won the faceoff that set up the goal, got an assist.

Muskegon’s Matt Steeves closed out the scoring with less than a second left in the game with an empty-net goal.

DeRemer, the big scorer, and Hoover, the assist king, are a perfect combo for Mona Shores soccer