Muskegon Catholic prepared for another tough playoff contest against Frankfort

MUSKEGON – Most Muskegon Catholic fans have noticed that their football team has been following the same path it treaded in last year’s playoffs.

The first three opponents on the playoff trail are the same – Mount Pleasant Sacred Heart, Beal City, and this week Frankfort.

But the fans have also undoubtedly noticed that the outcomes of the first two playoff games have been a bit more one-sided than last year.

In 2015 the Crusaders opened the playoffs with a 49-7 victory over Mount Pleasant Sacred Heart. While that certainly qualified as a blowout, this year the final score was 68-7.

That’s a swing of 26 points in favor of MCC over the first two playoff games.

That’s not surprising. Last year the Crusaders were a young, more inexperienced team with two losses heading into the playoffs. This year, with a ton of returning starters from last year’s state title squad, the Crusaders are 11-0, and most of their games have been very easy victories.

Last year MCC entered Week 3 of the playoffs with a 388-153 scoring advantage over its first 11 opponents (that included a 2-0 forfeit victory over Muskegon Heights). This year the Crusaders have outscored opponents by a whopping 507-71. 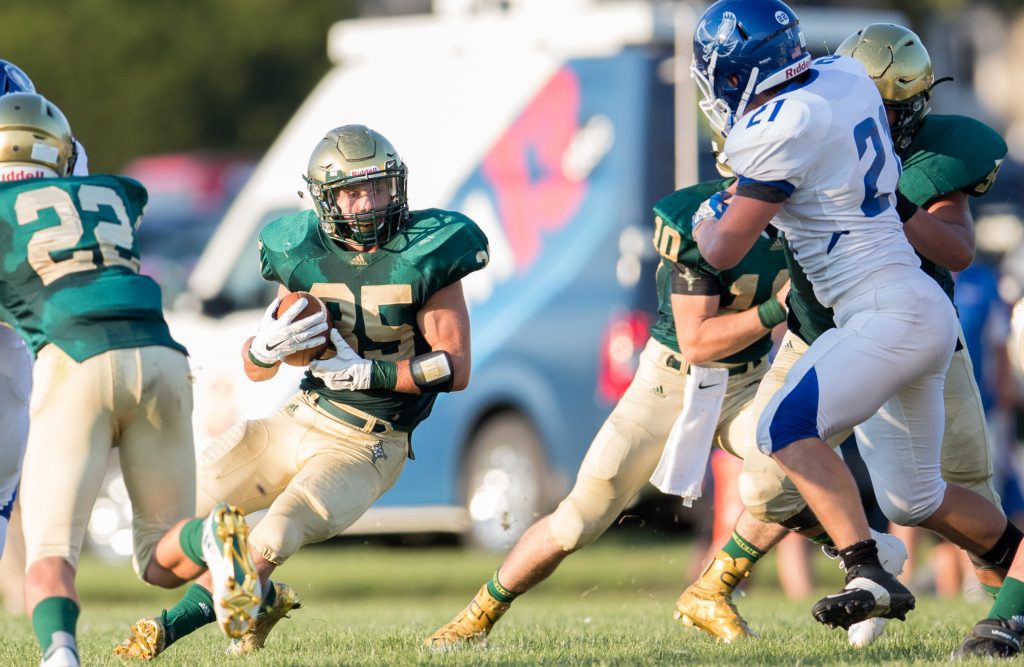 Logan Helton (35) looks for a hole in a game earlier this season. Photo/Kevin Sielaff

So the playoff path has been easier for the Crusaders this fall – up to this point.

But Coach Steve Czerwon expects that trend to end this Saturday against Frankfort, which will visit MCC’s Kehren Stadium at 1 p.m. on Saturday in a Division 8 regional championship game. The winner will advance to the state semifinals against the winner of the St. Ignace-Norway regional matchup.

If anything, Czerwon is preparing for a game more similar to last year’s, when the Crusaders had to rally in the second half for a tight 22-12 win in Frankfort.

The come-from-behind win improved Frankfort’s perfect record to 11-0, matching MCC’s flawless mark. The Crusaders are ranked No. 1 in Division 8, while Frankfort is No. 6.

Last year, like the Crusaders, Frankfort entered the playoffs with two regular season losses. In 2015 the Panthers outscored opponents 331-138 in 12 games. This year the point differential is 413-129 through 11 games.

Both teams are clearly better than they were last year, which means it could be another war.

“They gave us a good challenge last season, and the thing I remember the most about them is they were physical – probably every bit as physical as us,” Czerwon said. “We were able to hit some big plays and sustain some successful drives which turned the game in our favor.

“They’re a better team than they were last year. Their record is proof of that.”

Czerwon said Kelly’s speed and playmaking ability stood out for the Panthers in their district championship victory last week. Aside from being their leading rusher, he is also their leading tackler as a linebacker on defense.

“He’s a talented kid and one we’re very concerned about,” Czerwon said.

Quarterback Tige Stockdale orchestrates a spread offense for the Panthers, which could cause some headaches for the Crusaders.

But MCC’s incredibly stingy defense will also pose some real challenges for Frankfort. The unit has allowed just 71 points this season, for an average of 6.4 per game. And the majority of those 71 points were given up by reserve defenders.

“Our first-team defense continues to play well,” Czerwon said. “They’ve only given up 18 points. All the rest have come on our reserves late in games.”

Czerwon said the key to victory on Saturday will be execution, which the Crusaders do very well. Although they’ve attempted fewer than 60 passes all season, MCC quarterbacks Cameron Martinez and Trenton Bordeaux have only combined to throw two interceptions.

“At this time of year, it’s all about execution – which team can execute what they do the best and how well you can hide your weaknesses,” Czerwon said.