COMSTOCK PARK – Muskegon Catholic soccer coach Bill Moulatsiotis will not be able to retire in the glow of a state championship.

The veteran MCC coach has been on a thrilling ride in recent weeks, with his underdog Crusaders making a Cinderella run through the Division 4 state tournament and advancing all the way to Saturday’s state title game against Genesee Christian.

But Moulatsiotis’ final game did not end in storybook fashion. MCC fell behind in the first half and lost 3-0 to Genesee Christian, which wrapped up its second consecutive state title. 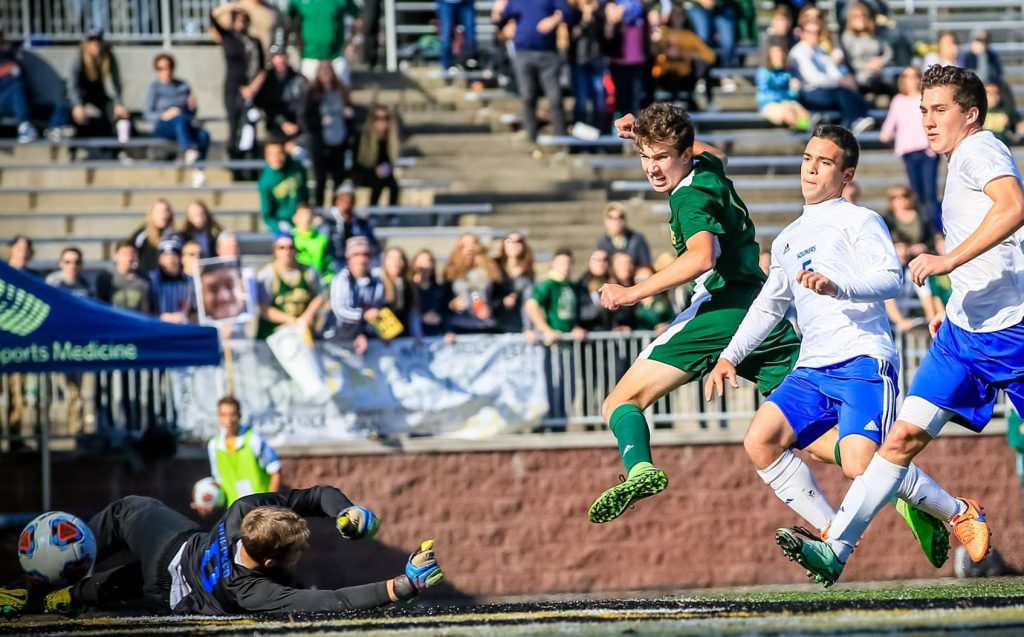 “We didn’t get enough quality shots,” said Moulatsiotis, whose squad ended with a 13-9-4 record after suffering through a long winless streak near the beginning of the season.

“We didn’t crash enough on goal. I think our nerves played a factor, especially the first 10-15 minutes. We came out flat, and we weren’t able to get over the hump like we have so often this season.”

MCC senior midfielder Collin Powers gave every one of his teammates a hug as they lined up on the sideline prior to the postgame trophy presentation.

“They say all good things come to an end once in a while,” Powers said. “This run has been one of the best in school history. It’s been fun.”

The Crusaders’ stunning run to the title game was made possible, in part, by opportunistic goal scoring. They came up with big goals when they needed them most, in game after game.

But Genesee Christian didn’t let that happen this time. The Soldiers had not allowed a goal throughout the postseason tournament, and kept the streak alive on Saturday.

Genesee Christian’s opening goal was a stunner, because it came from a corner kick. 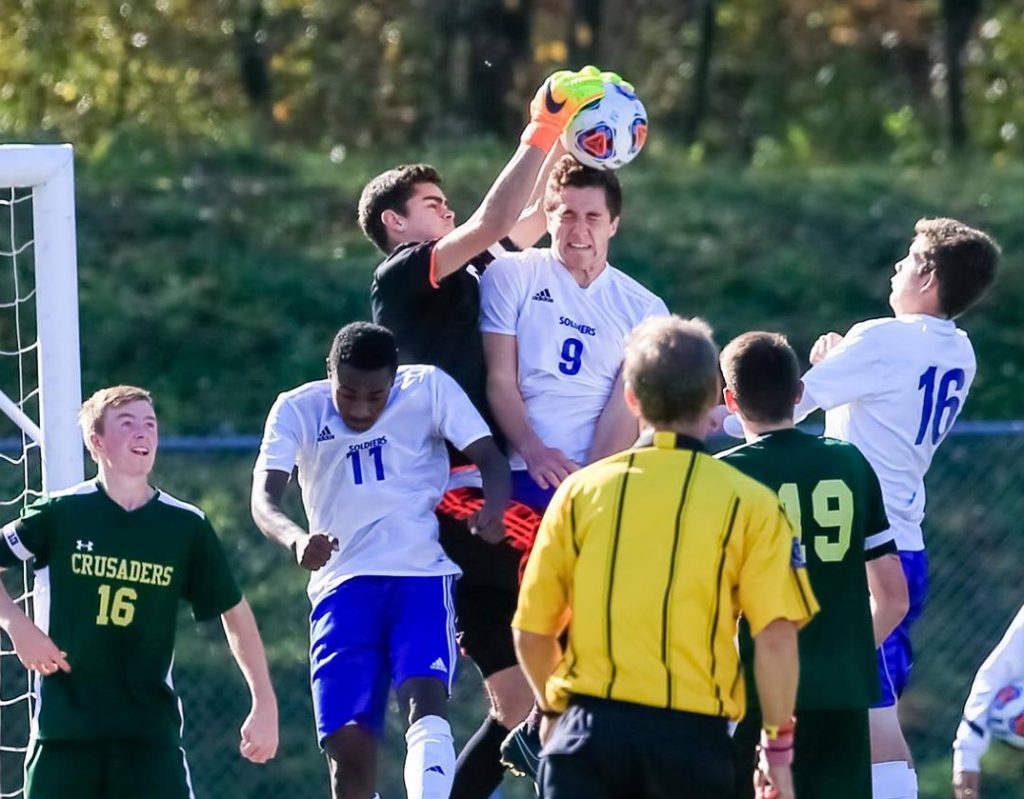 Crusader goal keeper Connor ONeil gets up for the save. Photo/Tim Reilly

Senior Cole Russell’s left-footed attempt had some late bending action that fooled Crusaders goalie Connor O’Neil and snuck into the upper left corner of the goal nearly 8 minutes into the contest.

Muskegon Catholic had a tremendous opportunity to tie the score a couple minutes later when Jose Zambrano zipped a pass through a pair of defenders to the feet of senior Neil Kuharevicz.

But Kuharevicz, who scored the game-winner in the Crusaders’ semifinal victory against Kalamazoo Hackett on Wednesday, rushed his attempt and pushed it wide left.

Genesee Christian went back to work, picking up a hard-fought header goal from senior Caleb DuPree with 24:14 left in the first half.

DuPree later added his 29th goal of the season, giving Genesee Christian a 3-0 lead at halftime.

That was more than enough cushion for the defending state champions, who kept the Crusaders’ dangerous “Jose duo” – Jose Zambrano and Jose Mojica – under wraps. MCC only managed one shot on goal in the second half and failed to mount a comeback.

Genesee outshot MCC 10-6 in the game.

“They were really disciplined on defense,” Powers said. “They didn’t overcommit on anything. They kept their line very well put together, which made it hard to put the ball through.”

Moulatsiotis thanked his team after the contest.

“I told them I was supremely proud of them,” he said. “They restored my faith in humanity. You hate to go out like this, but it’s been a great ride.”

“At MCC, we’re considered a football school, so to see all these fans out here and everyone supporting the soccer team, that’s been my favorite part,” he said.

Moulatsiotis, who’s retiring from coaching after six years at MCC, said he’ll fondly remember the success he’s enjoyed with the Crusaders, and the chance to become part of the MCC family.

“I went to Mona Shores, I’m an alumnus there and I never thought I’d bleed anything except blue and white,” he said. “But they checked my veins the other day and it was green and gold.

“It’s been a dream to coach here. The parents and staff have been nothing but supportive. They’ve never had a negative thing to say. That’s why they’re able to get such good coaches to come here.” 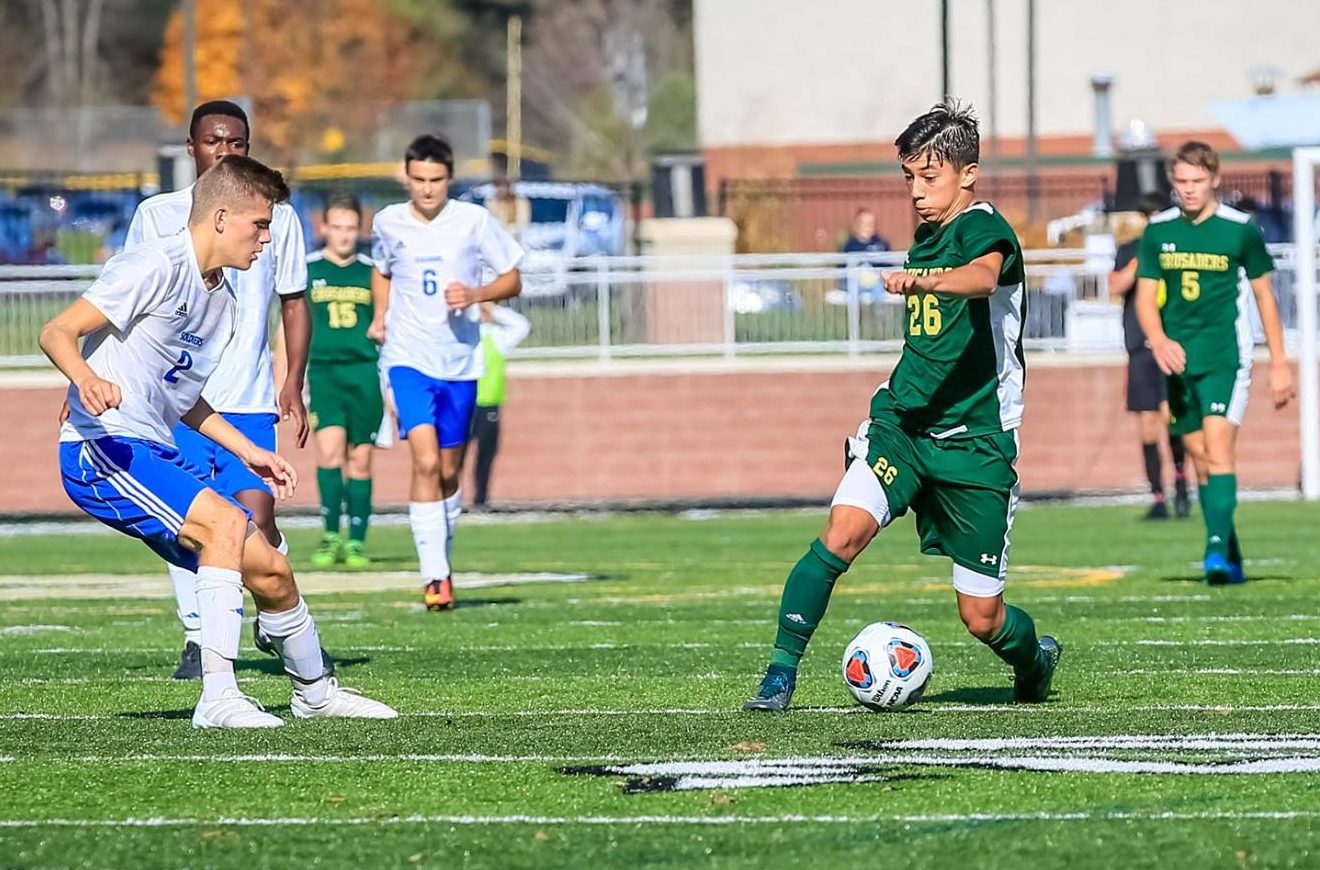 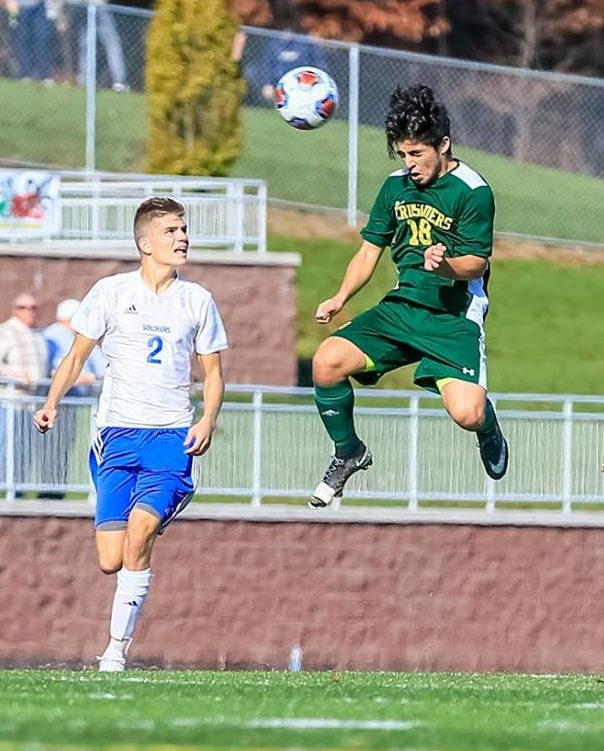 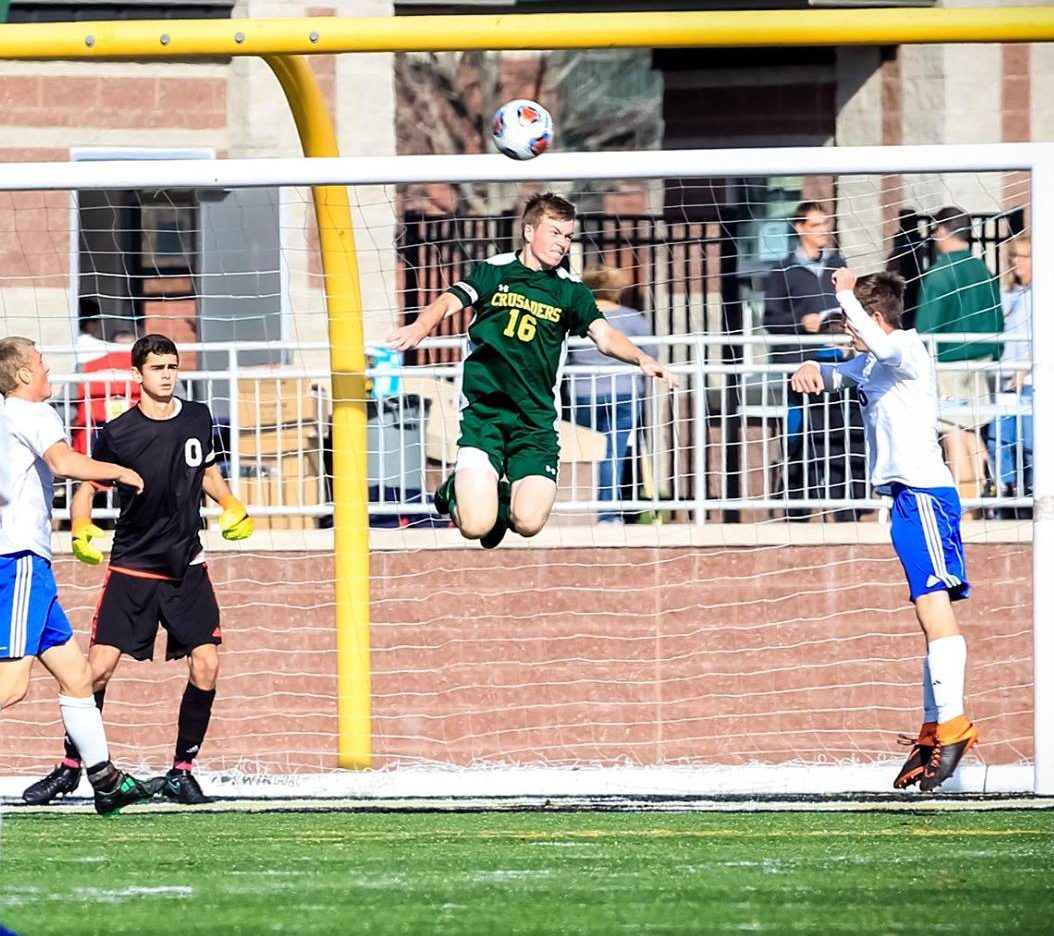 Bobby Ahem gets in front of the shot for the Crusaders. Photo/Tim Reilly 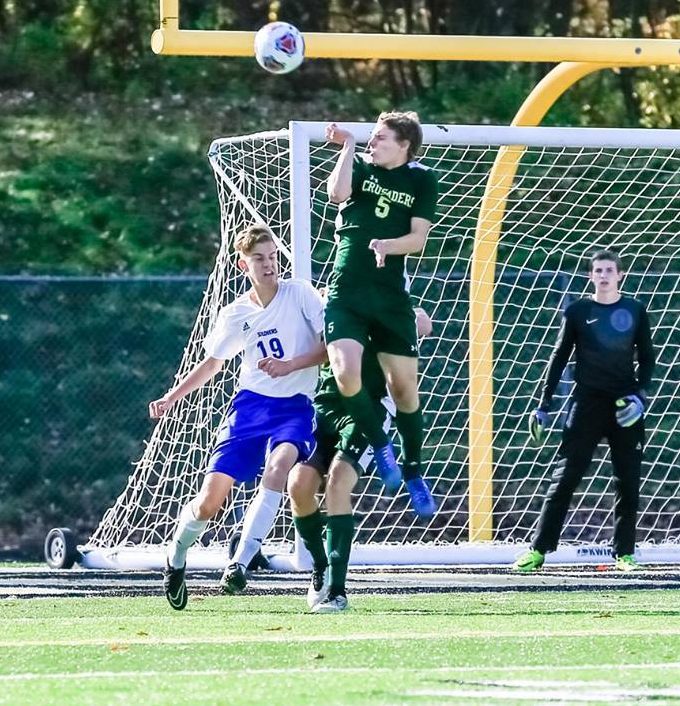 No. 5 Evan Morse heads the ball out of the MCC zone. Photo/Tim Reilly 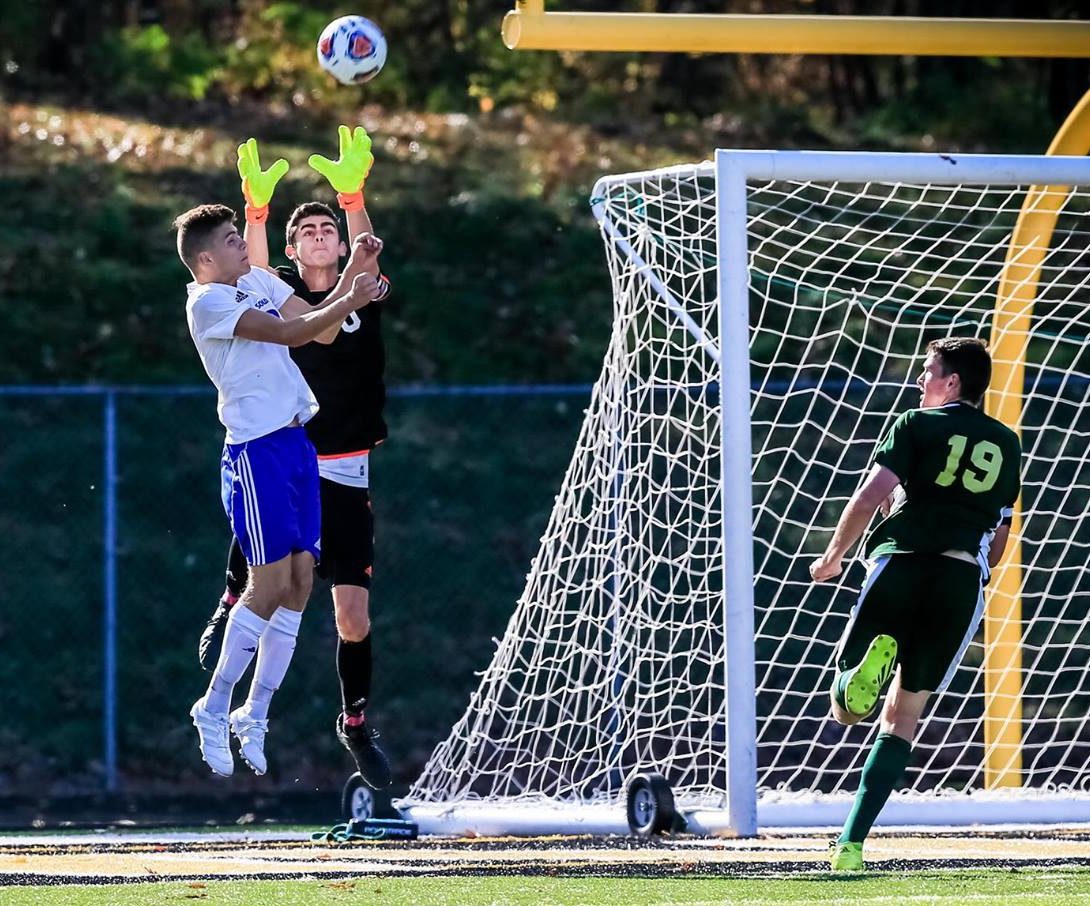 Goalie Connor ONeil goes for the save with No. 19 Nick Morgenstern protecting the net. Photo/Tim Reilly

No. 7 Neil Kuharevicz leaps to get his foot on the loose possession. Photo/Tim Reilly 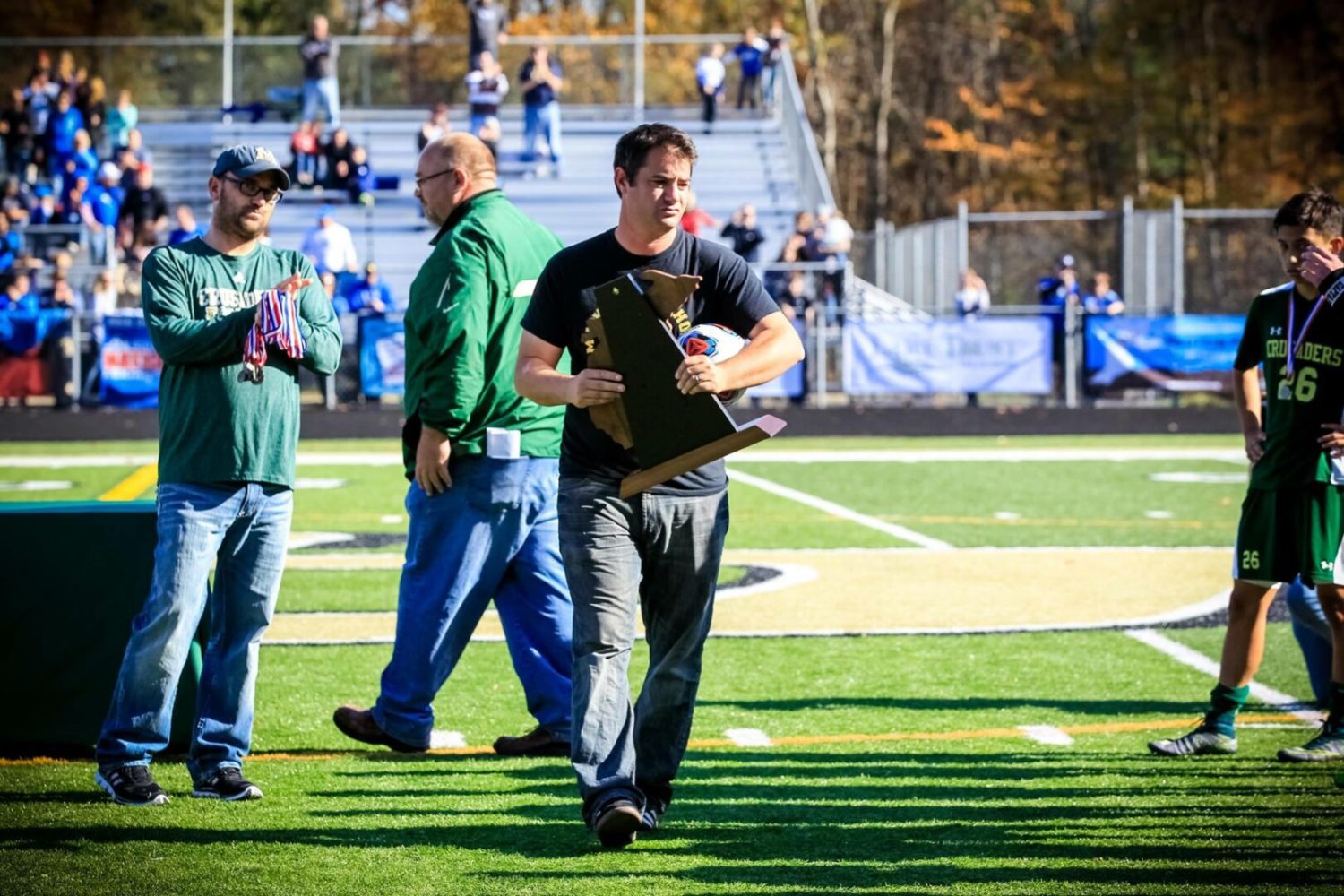