HOLTON – The Shelby volleyball team was not happy with the way its season ended last year, with a loss in the district finals to Montague.

The Tigers made up for that disappointment, and brought a fresh district trophy back home on Friday, with a convincing three-set victory over Holton in the Class C finals at Holton High School. 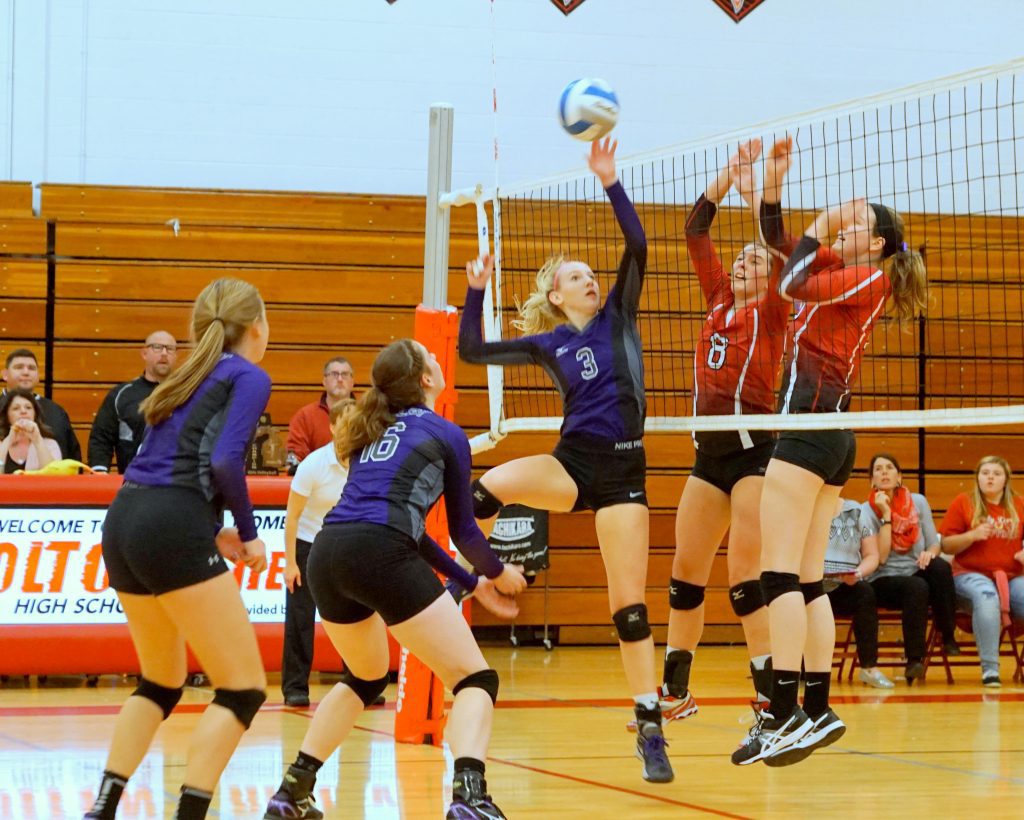 “It was awesome,” said third-year Shelby Coach Tom Weirich, whose team has won two district titles in the past three years. “We played well against a solid Holton team. Going into it we thought we had the edge but they came out and got on us.

“But our girls were pretty focused getting on that bus tonight. They have played in some big games already and they are pretty focused on getting a little farther in the tournament this year.”

Shelby, which tied for second place in the West Michigan Conference this season, improved to 37-12-2. The Tigers now advance to Tuesday’s regionals against Saginaw Valley Lutheran at Beal City High School.

Jaren Smith paced the Tigers with 19 kills and added 12 digs defensively while McKenna Peters had a team-high 25 digs and 11 kills. Kasey Morse chipped in with 37 assists for Shelby.

“It feels great,” said Smith after being asked how it felt to be a district champion. “We worked hard all season for this day.

“I feel like this team has really good chemistry, and we can make it pretty far as long as we play as one instead of as six individuals. If somebody makes a mistake we just pick them up by moving on to the next play.”

The Red Devils took a 16-15 lead before Shelby captured seven of the next eight points on service runs by Smith and Tori Mussell to take a 22-17 lead.

Holton cut its deficit to 22-20 before the Tigers scored five of the final six points to clinch the first set.

The Red Devils jumped out 7-2 lead to start the second set on a four-serve run by senior Shelbey Younts. 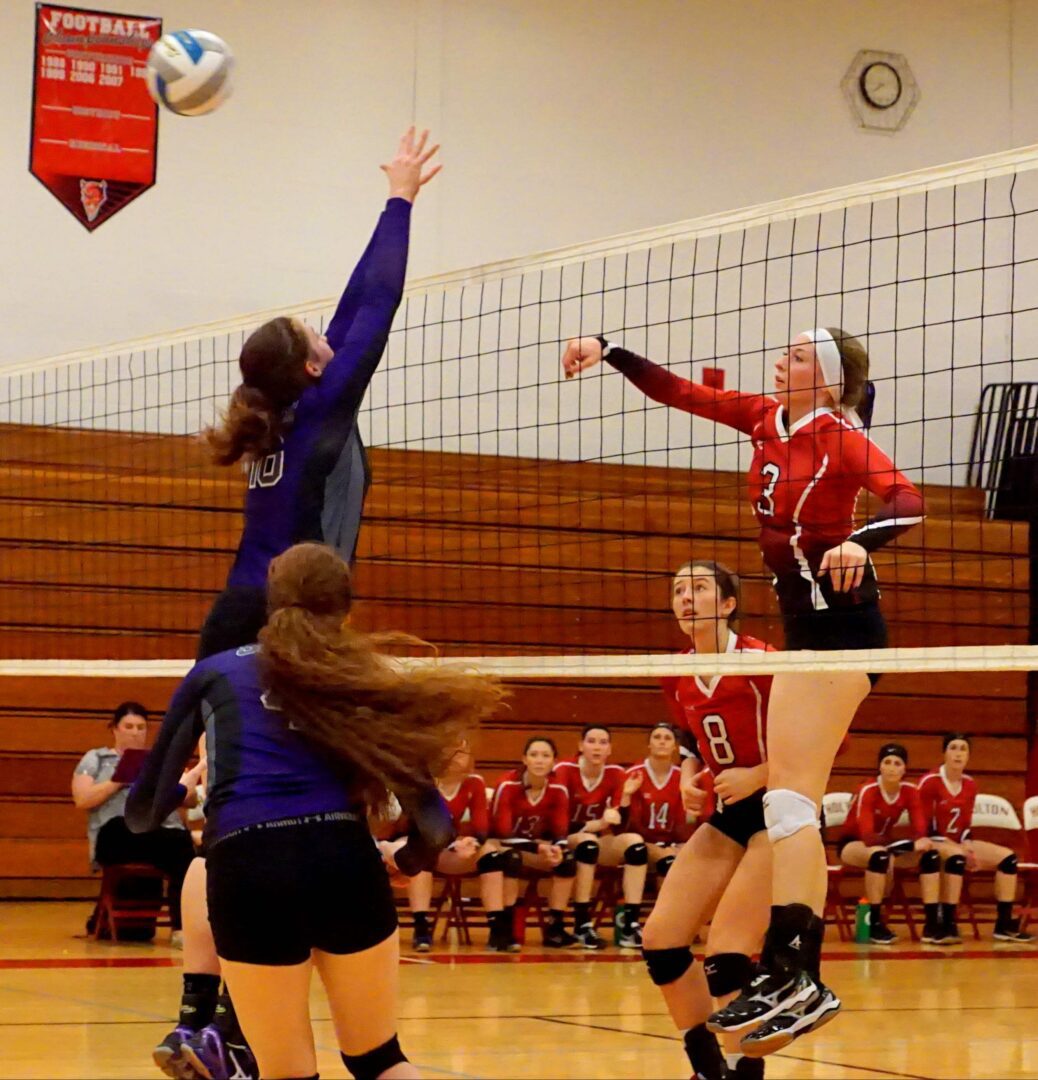 Holtons No. 3 Mikaela Baker on the spike. Photo/Leo Valdez

The Tigers tied the set 13-13 and 15-15 before closing with a 10-4 tear on strong service runs by Peters and Brooke James as well as solid play in front of the net by Smith.

The Tigers never trailed during the third and deciding set.

The Red Devils managed to cut their deficit to 15-13, but Shelby closed out the match with a 10-0 tear on a long service run by junior Amy England.

“My girls did what we asked them to do and were working hard, but we just got a little frustrated during that third set.”said Holton Coach Erin Byrnes, whose team finished with a 20-15-2 overall record.

Holton was led by Mikaela Baker with nine kills while Madison Swenson and Dani Tanner each had nine digs. Younts chipped in with 18 assists for the Red Devils. 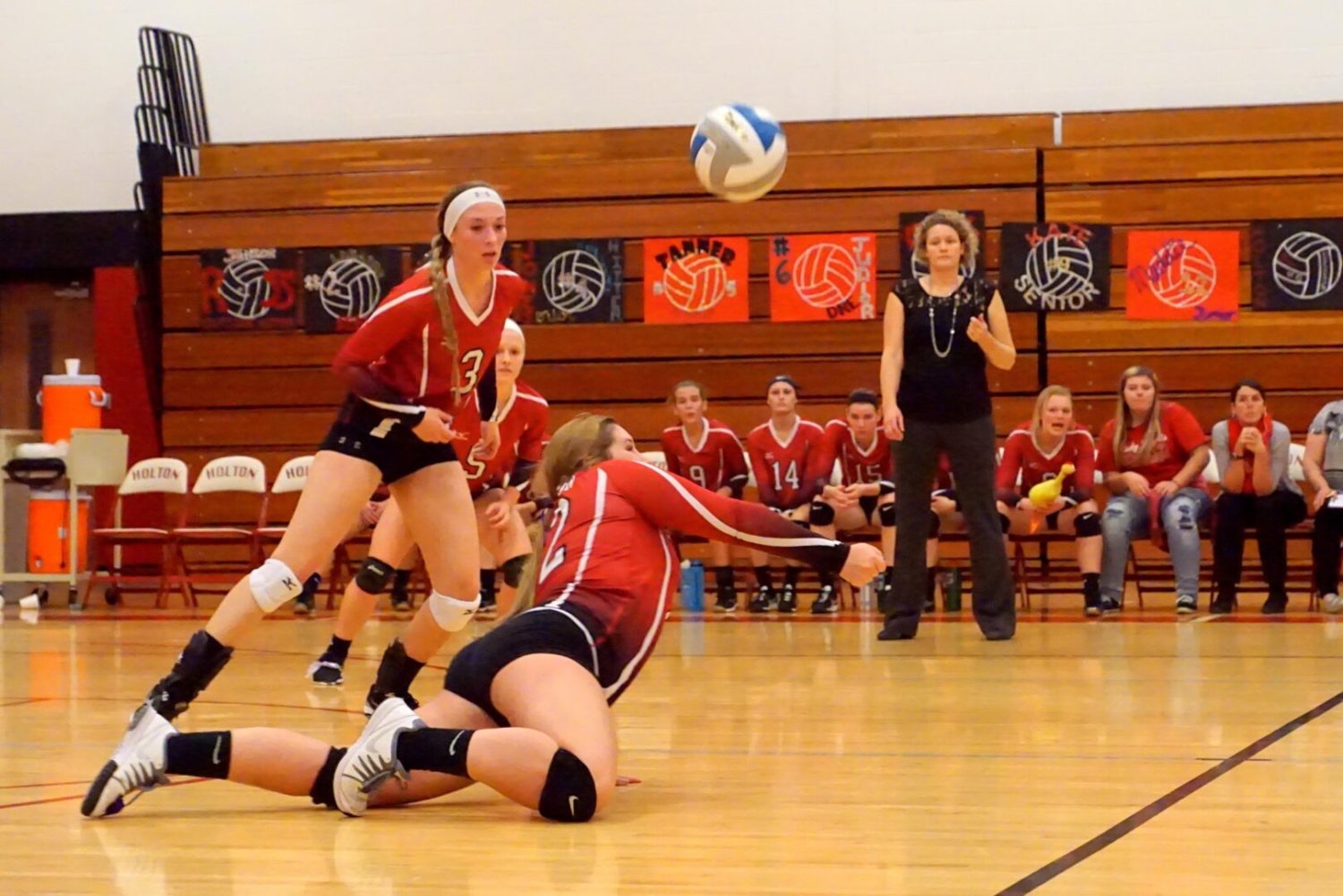 Madison Swenson goes in the for the Holton dig. Photo/Leo Valdez 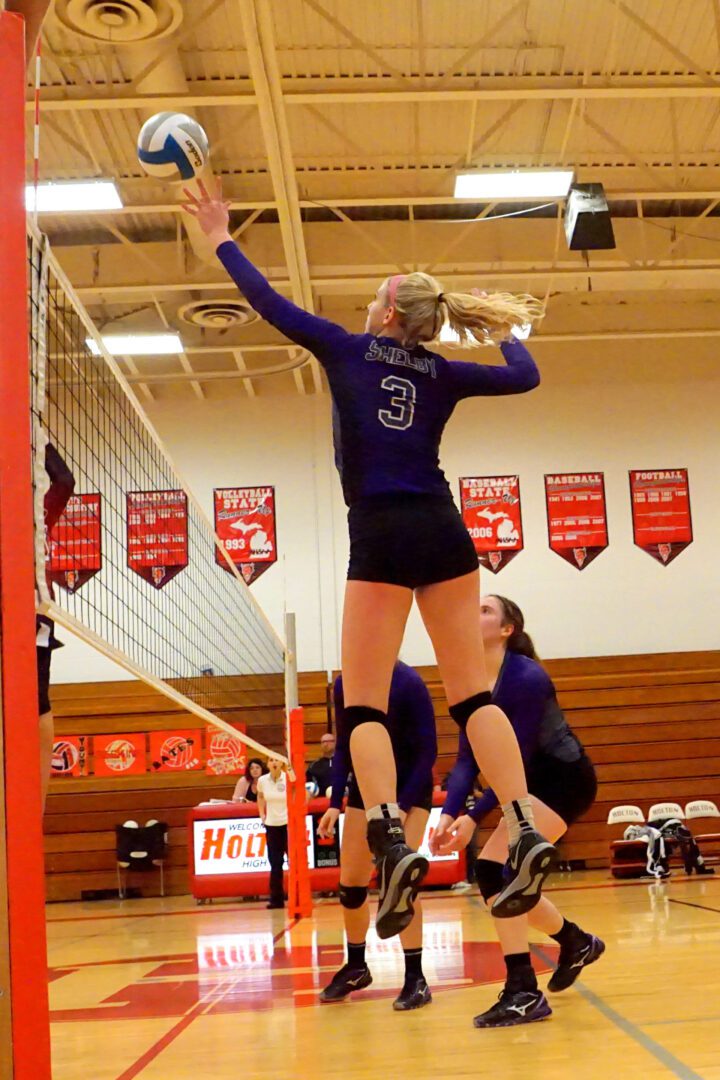 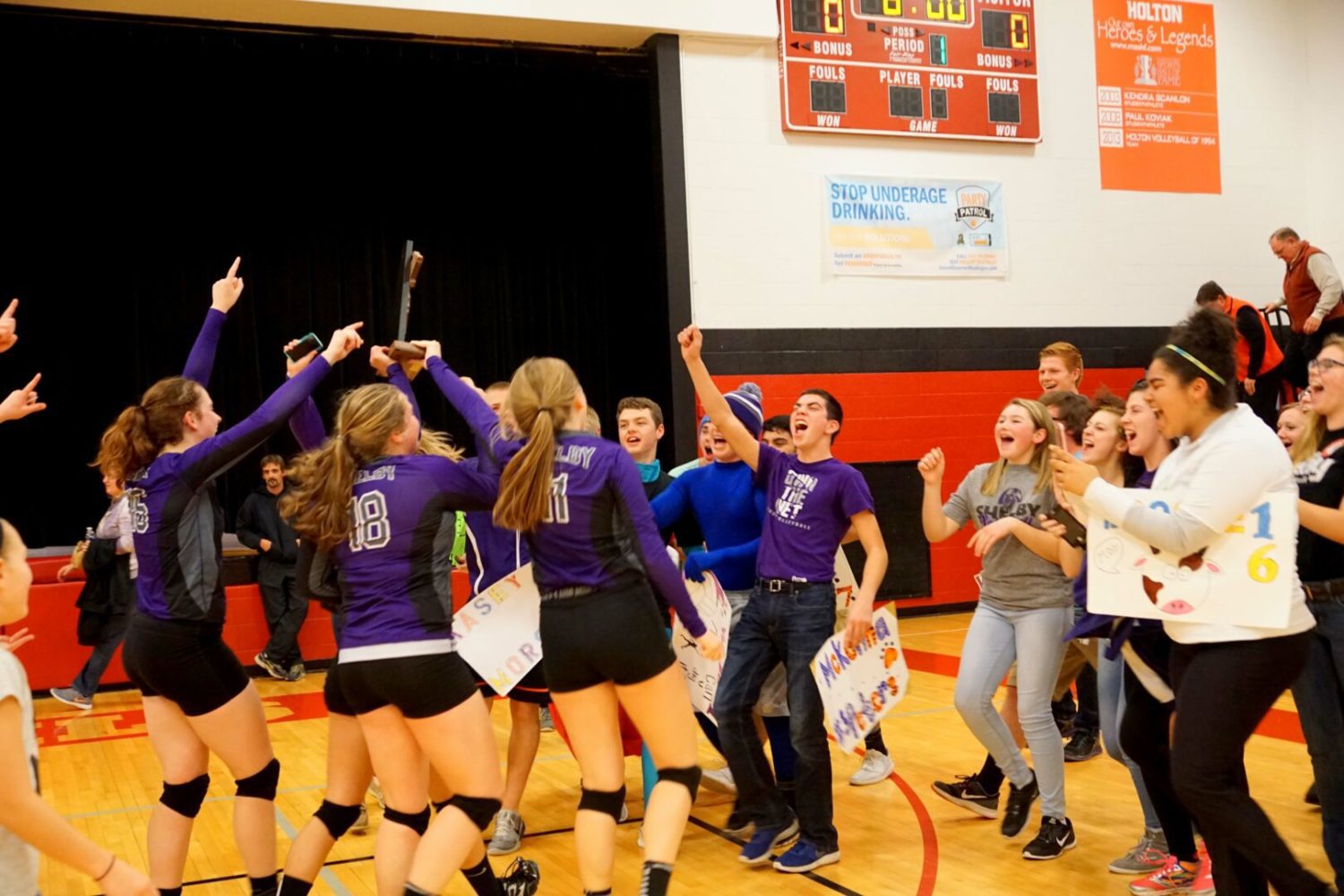 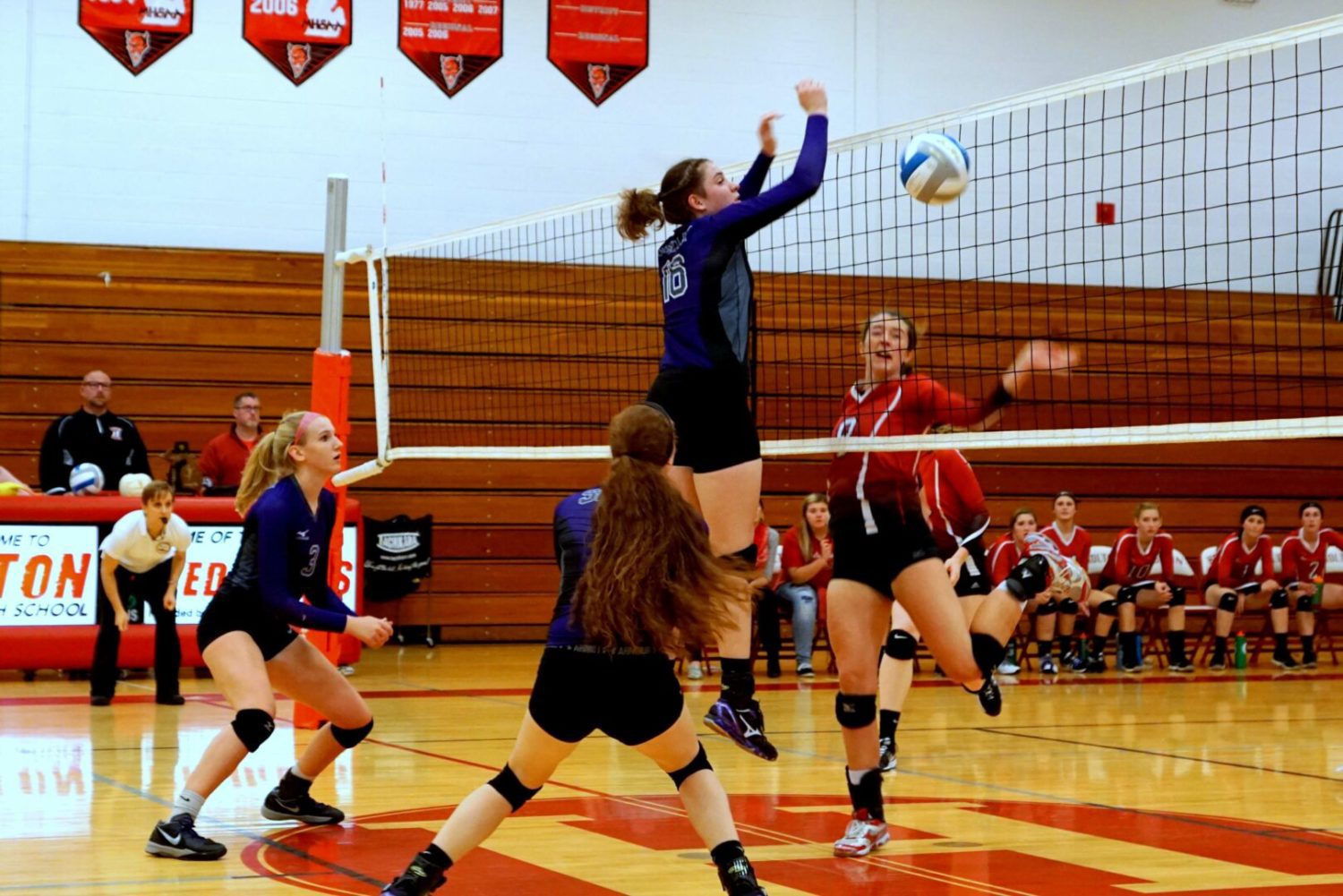 Brooke James looks back after getting her shot blocked by Holtons No. 8 Shelbey Younts. Photo/Leo Valdez 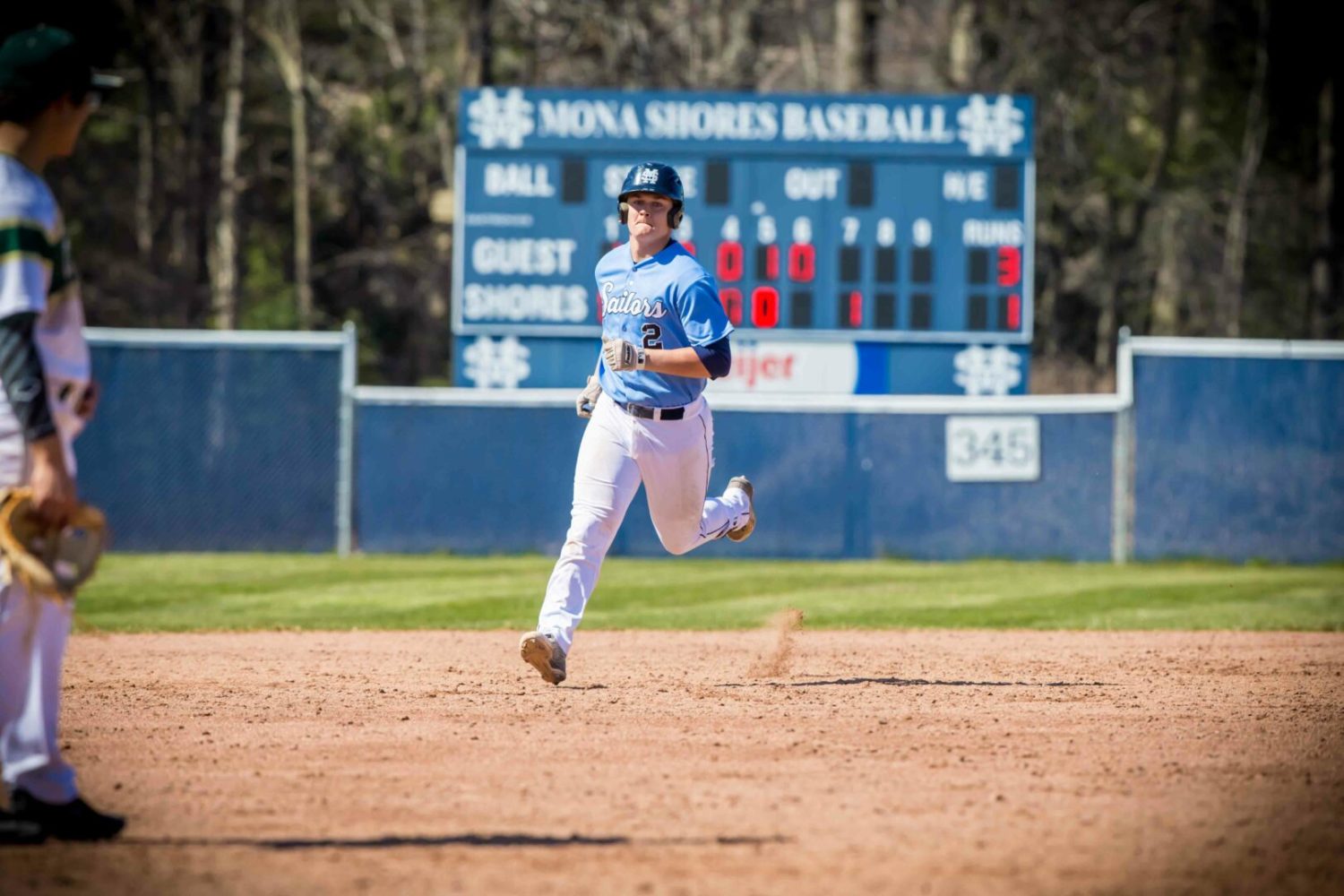