ROCKFORD – The slogan on the back of the Muskegon basketball team’s warm-up tops is “defense travels.”

It traveled well to Rockford High School on Friday night for the Big Reds’ season opener. 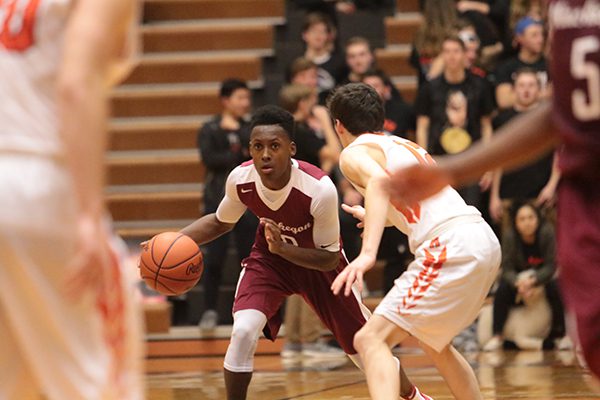 DeAndre Carter Jr. looks for the open man at the top of the key. Photo/Doug Sims.

Muskegon picked up its defensive intensity a notch in the second half against the host Rams, shutting down their strong 3-point shooters and helping the Big Reds pull away for a comfortable 57-42 victory.

“We talk about ‘defense travels’ and I thought our defense helped us tonight,” said Muskegon Coach Keith Guy, whose team got off to a late start with preseason practices because many players were on the varsity football team that made the state finals.

“I expected our offense to be a little choppy tonight. We’ve had six practices as a full unit. It’s going to take some time for us to find a rhythm and get in a groove, but we grinded it out defensively and locked in, especially in the second half.”

Muskegon’s best stretch of fluid offense and lockdown defense came in the second quarter, when the Big Reds turned a 15-15 game into a 33-22 halftime advantage. 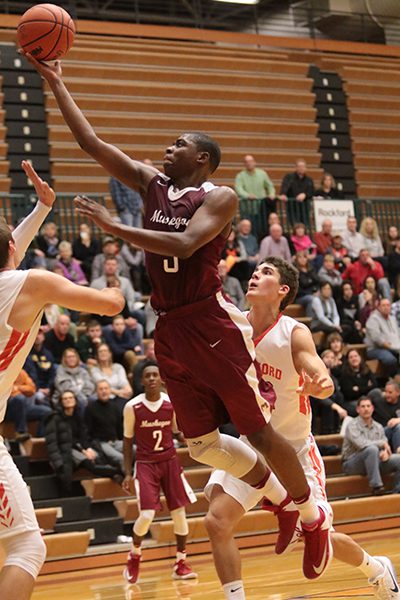 Senior wing Jermane Golidy scored eight of his game-high 20 points in the second quarter, including a sweet spin move and flip shot in the closing seconds of the half to cap his team’s run.

“I’ve been working a lot (on creating off the dribble),” Golidy said. “I’ve been doing a lot of different ball- handling and shooting drills.

“We think we have what it takes to get to the state championship,” he added. “We’ve got more height, and we’ve got more guys who want it. We go at it so hard and push each other. We’ve got better scorers and better defenders.”

Both teams’ offenses bogged down in a low-scoring third quarter, but when Rockford narrowed its deficit to 39-31, Muskegon responded with senior Markell Jackson. The 6-6 forward hit a huge corner 3-pointer to open the fourth quarter, and added much-needed points for the Big Reds.

“Markell is sweet,” Guy said. “He showed just a glimpse of what he’s capable of doing tonight. He’s probably one of the better shooters in the state. And he can put the ball on the floor and go right or left with a baby hook.”

Rockford fought back to within seven points two different times in the fourth quarter, but Muskegon closed strong with nice pull-up jumper from Grandville transfer Sam Cornett Jr. and a finish in the lane from Golidy to seal the deal.

Guy liked the performance of his point guard duo of sophomore DeAndre Carter Jr. and Willie Shanks, saying they calmed the Big Reds down when things got hectic offensively. Carter had seven points, while Shanks pulled down four rebounds and handled the Rams’ occasional full-court pressure defense.

Rockford 6-6 center Ryan Gamm had 16 points and eight rebounds, but had to work extremely hard for his points, thanks to Muskegon’s strong low-post defense, led by Anthony Bethea.

“What I learned is we have a lot of talent,” Guy said. “We’ve got to continue to work on the offensive end, but I think once we get our legs underneath us, we can flourish. I think we’re deep and we’ve got the chance to create a lot of matchup problems.” 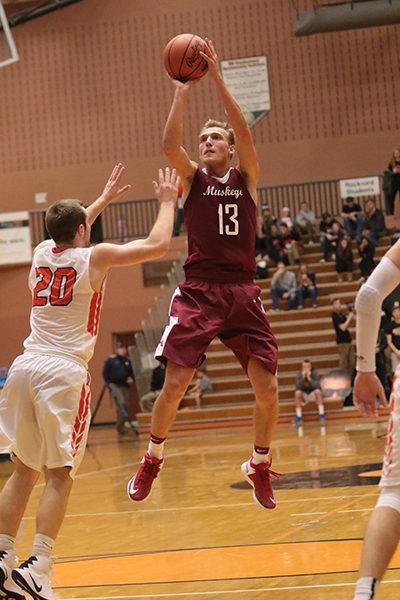 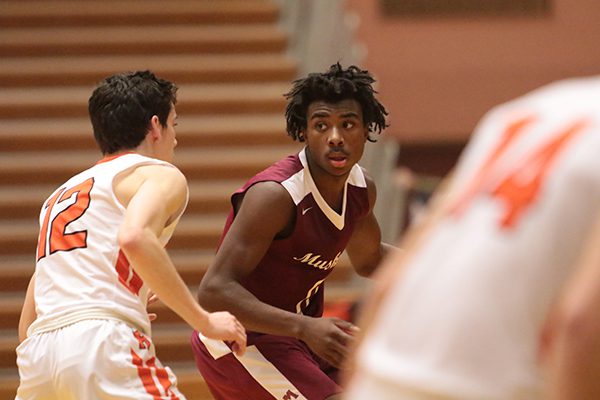 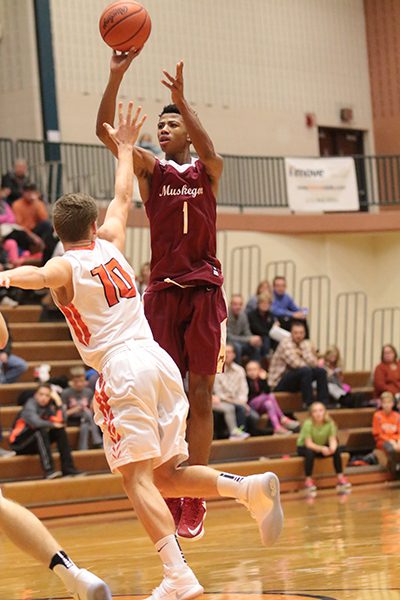 Markell Jackson gets up for the Muskegon jumper. Photo/Doug Sims 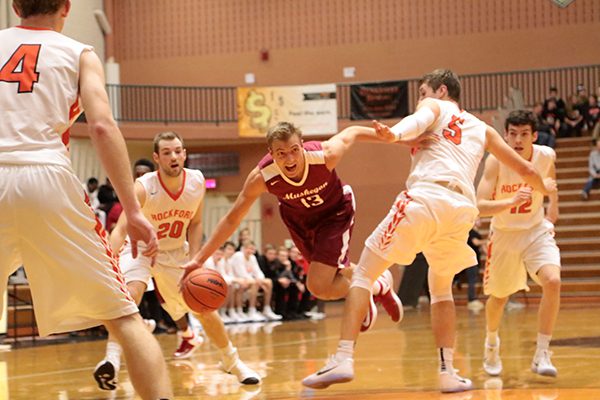 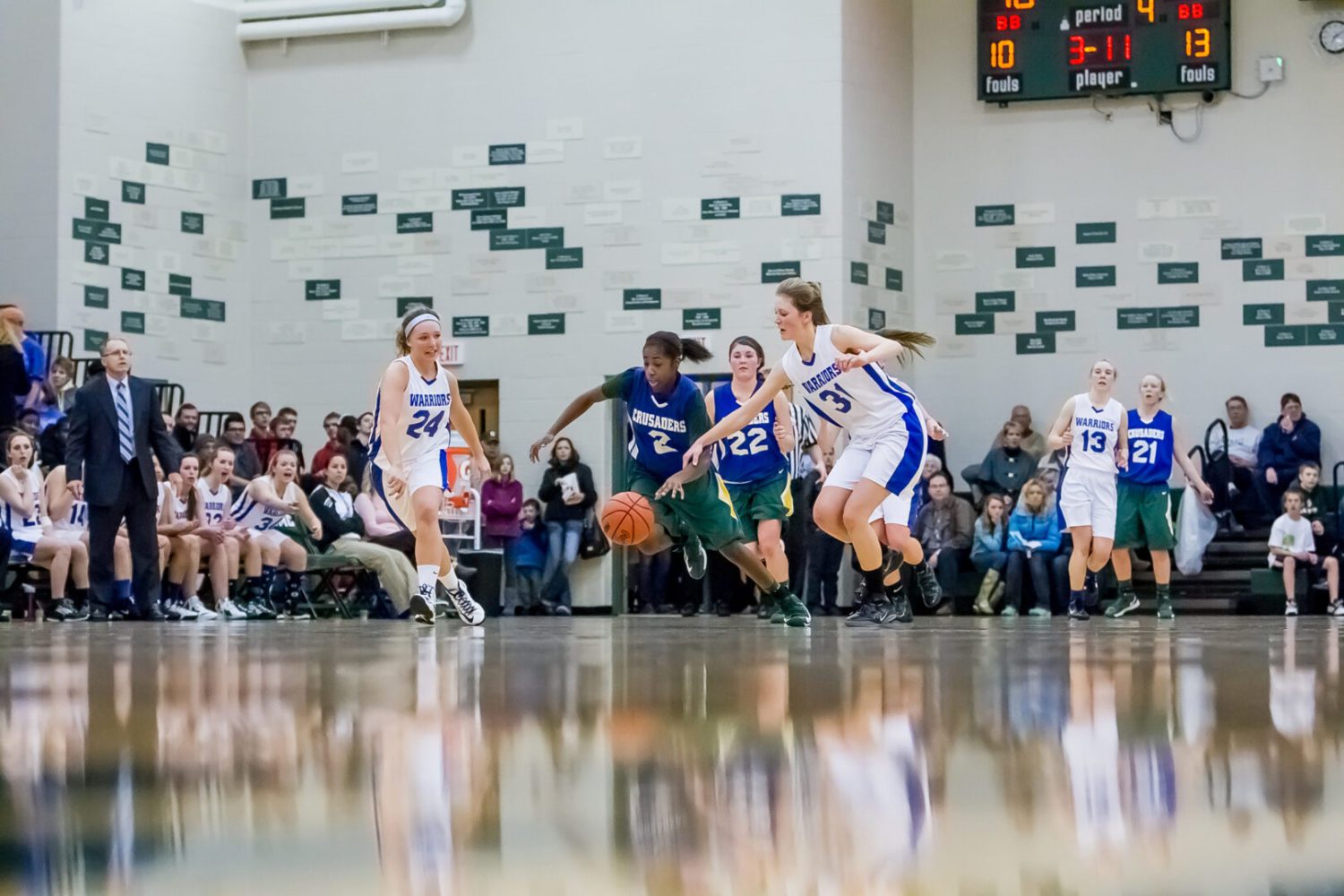