NORTH MUSKEGON – Riley Fairfield is going to a big problem for North Muskegon’s opponents this season.

The senior forward started his season in style on Tuesday, pouring in 27 points to lead the Norse past Muskegon Catholic 60-45 in a non-conference matchup on the season’s opening night.

Fairfield was at his best when it mattered the most, scoring 11 points in the first quarter to give North Muskegon an early advantage, and 11 more in the third quarter to help the Norse pull away.

He also finished with four rebounds, a blocked shot and an assist.

“I expect him to be pretty efficient,” said North Muskegon Coach Chuck Rypstra about his standout forward. “He took 21 shots and had 27 points. That’s not too bad. He didn’t settle for a bunch of threes out there.”

“Him putting up 27 is tough, but he deserves that, he worked for every bit of that,” said MCC Coach Lamar Jordan about Fairfield.

The game was close in the first quarter, with North Muskegon leading 13-9 at the first buzzer.

The Norse held MCC scoreless for most of the second quarter and built an 11-point lead with less than two minutes to go before halftime. But the Crusaders’ Andre Johnson hit back-to-back 3-pointers and Connor O’Neill drained two free throws to make the score 23-17 at halftime.’

North Muskegon took over in the third quarter. Fairfield scored another 11 points as the Norse shot 55 percent from the floor and outscored MCC 23-8.

“All I told them (at halftime) was to run our offense and move the ball within it,” Rypstra said. “We had a decided size advantage in this game and when we pounded it inside in the post, we chewed them up.

“That was the big thing at halftime, move the ball around and get it inside.”

Jordan knew that the first few minutes of the third quarter would be crucial, and his Crusaders were not able to prevent the Norse from grabbing the deciding advantage.

“I told the kids the first three minutes (of the half) were going to be real important, they go on a 10-0 run and that’s really the game right there,” Jordan said. “You just need to limit those kind of runs, or be able to respond to them, and in that third quarter we didn’t.”

The Crusaders were playing with a bit of a handicap, because five of their 11 players were on the MCC football team that won a state championship on Thanksgiving weekend.

Jordan was only able to have three practices with his full team before having to open against the strong North Muskegon squad.

“I thought our guys did pretty good tonight, having three full practices, I saw some good things,” Jordan said. “This group really fights and has a certain type of toughness that they carried over from the football team.” 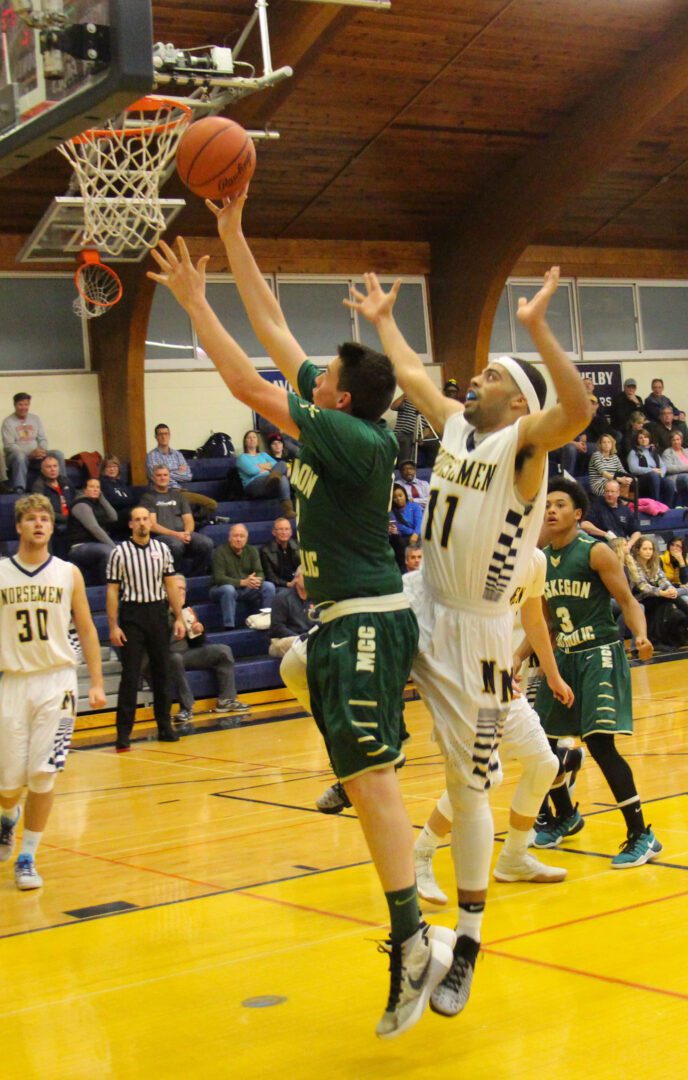 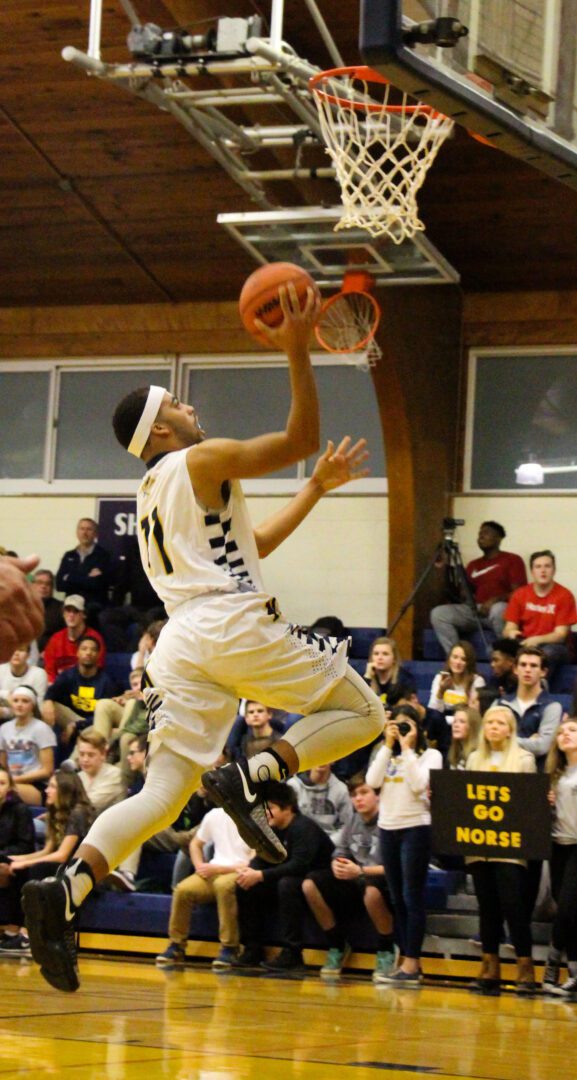 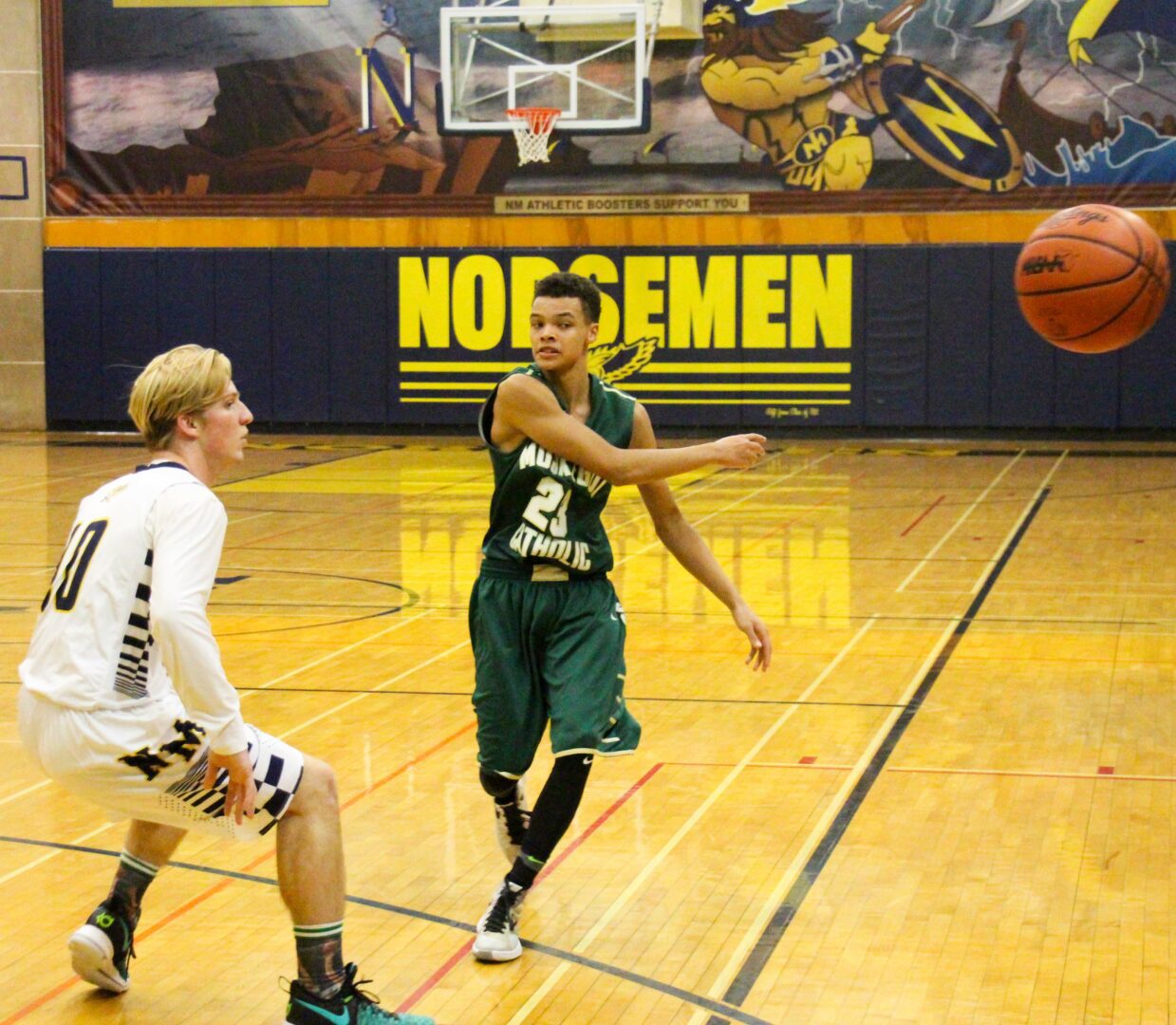 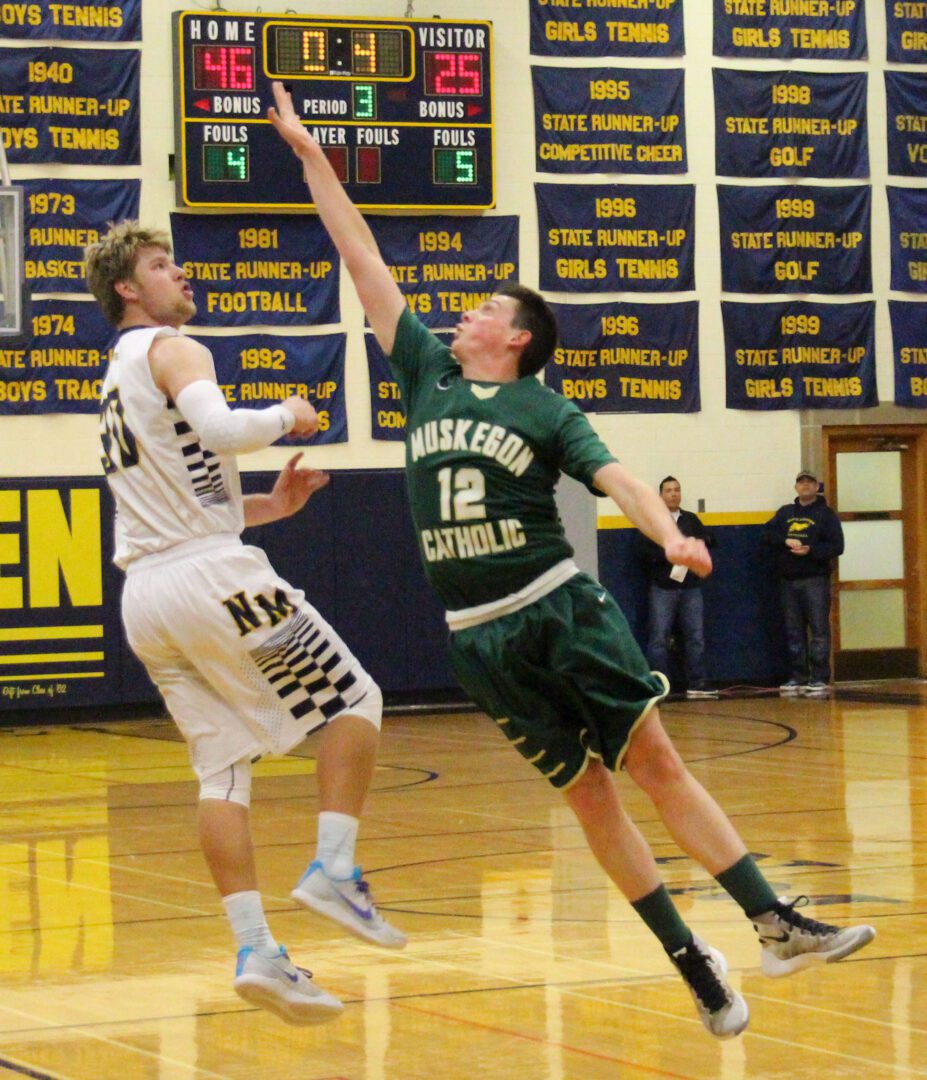 Riley Fairfield gets the shot off before the third-quarter buzzer over MCC’s No. 12 Nick Morgenstern. Photo/Jason Goorman