GRAND RAPIDS – It’s not every day that a walk-on tryout with a professional basketball team leads to a training camp invitation, then a spot on the team’s roster.

But that’s what happened to Chris Anderson, a 2010 Reeths-Puffer graduate, who is currently playing with the Grand Rapids Drive of the NBA Development League, the Detroit’s Pistons’ farm club. 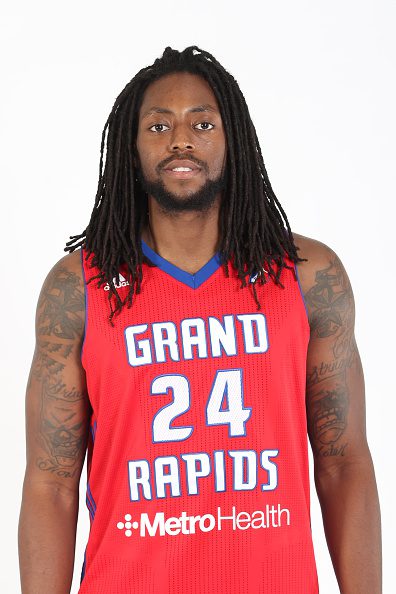 Anderson didn’t simply earn a spot on the Drive roster. He’s been a starter for the majority of games, and has been a consistent producer for the team.

Getting to the doorstep of the NBA was not an easy process for Anderson. He played six long seasons away from home, including two in professional leagues in foreign countries, before getting his big chance.

Now he says he’s determined to make the most of it – and perhaps find his way onto an NBA roster one of these days.

“Hope grew after the invite to training camp,” said Anderson, 24, who was a top scorer and rebounder at Reeths-Puffer and was rated the 67th best small forward in the nation in ESPN’s college recruiting rankings. “It was a big uplift and I felt like I was getting closer and closer. I ran a lot to stay in shape to have this chance, and I knew I had to take advantage of it.”

Anderson, a 6-7 guard, played two years at Weatherford College in Texas, where he averaged 14 points, five rebounds, three assists and two steals in two years with the team.

Those numbers attracted the attention of Division 1 Louisiana Tech, where he played his last two years of collegiate basketball.

“It was a big transition, but I loved it,” said Anderson about transferring to Louisiana Tech. “I went from basically playing a lot of minutes and being in one of the key roles to playing with other good talent and having a set role on a good team.” 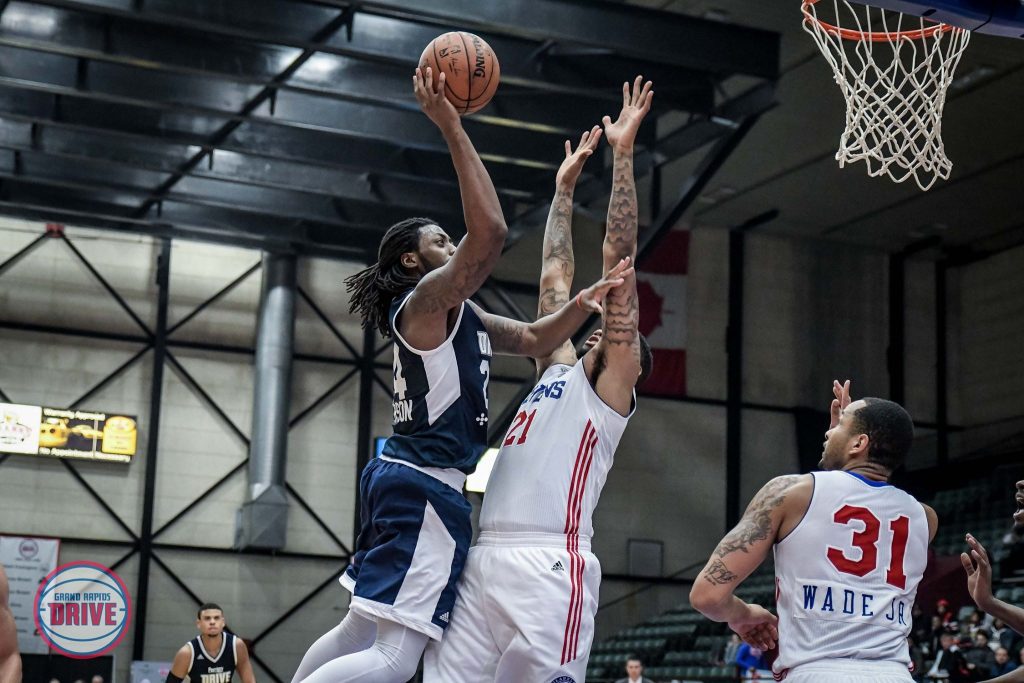 Anderson flourished for the Techsters, starting 10 games in his junior year and 36 of 37 games his senior season. As a senior he averaged 11.9 points and 5.6 rebounds while having three games of 20-plus points.

Anderson was at a crossroads after college. He wasn’t a candidate for the NBA draft or big league training camps, but was certain he wanted to pursue professional basketball.

“No, I didn’t have any doubt,” Anderson said about pursuing a pro career. “I had a few offers come up overseas, so I knew it would be there, but I wasn’t sure where I’d land. It was always in the back of my mind that I could do it.”

Anderson wound up in Mexico, playing for the Caballeros de Culiacan in the CIBACOPA League, where he averaged 12 points per game during the 2014-2015 season.

He moved on to Iceland in 2015-16, where he averaged 20 points per game with the FSU Selfoss team.

“It was actually a lot slower,” said Anderson about international pro basketball. “It’s kind of similar to college ball, but a bit slower and more team oriented, so it’s a transition, but not that big. 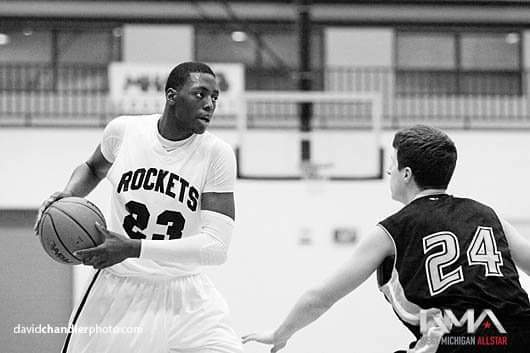 Anderson in action during his Reeths-Puffer playing days.

Anderson returned home this summer and attempted to get into the NBA Development League draft, but was told he’d had to go to a tryout camp, just like any other player off the street.

Anderson impressed the Drive and earned an invitation to training camp this fall, and eventually won a spot on the roster.

Anderson has been doing extremely well so far for the Drive. He has been in the starting lineup for seven of the team’s first 10 games and is averaging 6.9 points, six rebounds and 20.8 minutes of playing time per game.

After two years of playing thousands of miles away overseas, he said he loves playing at home in West Michigan, where his family is able to watch him.

“It feels great being able to play in front of my family,” Anderson said. ““They are some of my biggest fans and critics. They get on me a lot and never let me get too settled in. It’s a big uplift to have them in my corner.” 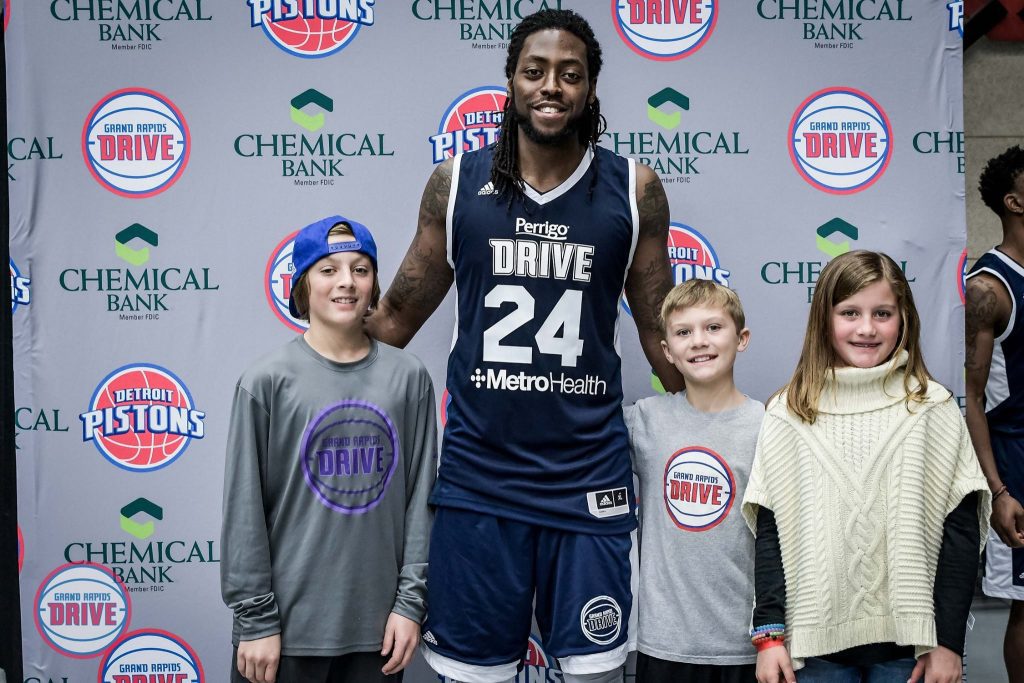 While playing near home for the Drive is great, Anderson  still has hope of playing in the NBA one day. It’s not an impossible dream. The NBA Development League exists to prepare players for the big show, and D-League players are frequently called up to fill holes in team rosters created by injuries.

Sometimes they take advantage of those opportunities and stick in the NBA.

“The goal is still to get called up one day,” Anderson said.

Drive head coach Rex Walters appreciates Anderson’s talent and dedication, and says he wouldn’t be shocked if Anderson gets an opportunity in the NBA some day.

“Chris brings great energy and toughness,” Walters said. “His ability to get offensive rebounds, play a physical brand of basketball, along with his ability to stretch the floor with his shooting is what this team really needs.

“Obviously the NBA is the highest level of basketball in the world, but I would never say never when it comes to Chris Anderson. He has a lot to learn, and this season will hopefully bring forth some opportunities with NBA teams and different NBA summer leagues. He has taken advantage of the opportunities he has been given, so I’m not counting him out.”