Hakkarainen, who was acquired from the Chicago Steel

on Nov. 26 for defenseman Derek Daschke, came through in the clutch for his new team last week.

He opened the scoring against the Youngstown Phantoms on Dec. 8 at the 7:28 of the first period to give the Lumberjacks a 1-0 lead. They eventually won 4-3.

The goal was the first of his USHL career.

Against the Team USA Under-17 squad the following day, Hakkarainen scored the lone goal in the overtime shootout to propel Muskegon to a 4-3 victory.

He also has two assists in his limited time with the Jacks. 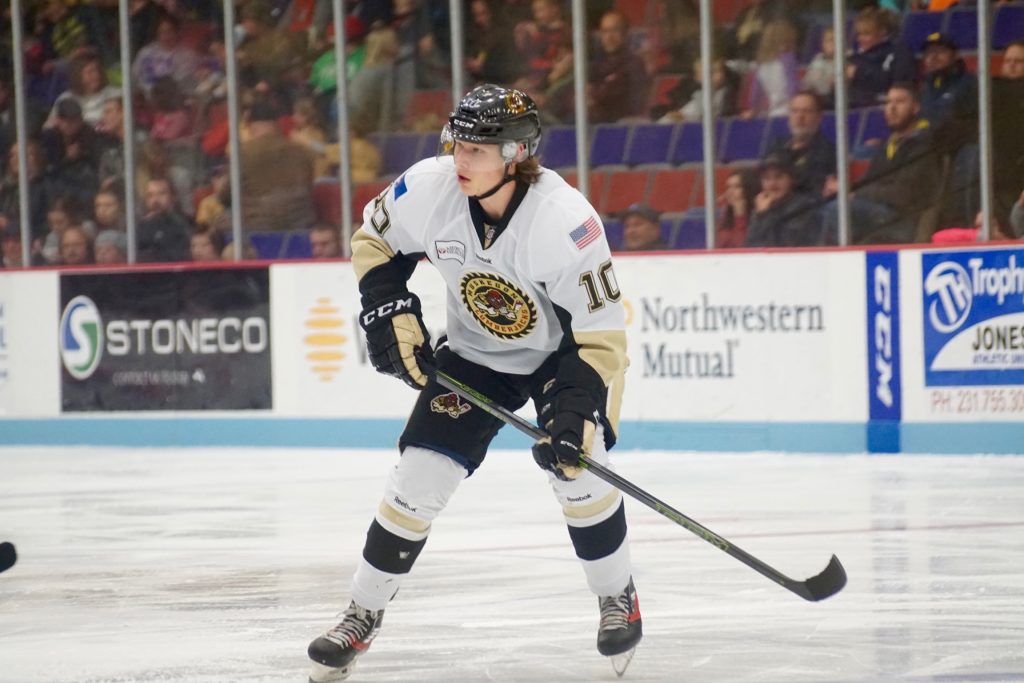 Mikael Hakkarainen in action with the Jacks

“It was nice to see him get his first goal,” said Lumberjacks Coach John LaFontaine. “We are excited about what we are seeing in him. Hakkarainen has good speed and he has shown us that he sees the ice real well.”

Hakkarainen and the Lumberjacks will return home on Saturday for a 7:15 p.m. game against the Chicago Steel, following a four-game road trip. Chicago currently leads the USHL’s Eastern Conference while the Lumberjacks are in third place.

The game will be particularly interesting for Hakkarainen, who will play against his former team for the first time since the trade.

“I am very excited to play my old team,” said Hakkarainen, whose is from Finland. “I want to show my coaches they should not have traded me. My style of play did not fit Chicago’s style of play so I asked to get traded. We need to play our best to beat the Steel.”

“I think the guys are good and really nice here (Muskegon),” added Hakkarainen, who had four assists through 16 games with Chicago. “They have a great coaching staff that teaches a great offensive style.”

LaFontaine is looking forward to the challenge of playing Chicago, and thinks Hakkarainen will handle the situation just fine.

“His time there was good but he wanted to get more ice time,” said LaFontaine. “He will just have to concentrate on playing our game, and he will. The Steel has led the conference from the start. We are ready for the challenge and we will see what we are made of.”

The Lumberjacks will be well represented at the 2017 USHL Top Prospects game, which will take place at Denny Sanford Premier Center in Sioux Falls, South Dakota on January 10.

The 40 players competing in the game are all eligible to be selected in next year’s National Hockey League draft.

The Jacks will come home with a two-game winning streak following the 4-3 overtime win over Youngstown last Thursday and the 4-3 shootout victory over Team USA the next day.

Muskegon, now 15-10 on the season, is currently in third place with 30 points in the USHL’s Eastern Conference. The Lumberjacks are two points behind the second-place Dubuque Fighting Saints (32 points) and seven points behind the first-place Steel (37 points).

Youngstown is in fourth place with 29 points while Green Bay is fifth with 27. The top four teams in the conference at the end of the regular season qualify for the playoffs.

The Bloomington Thunder (23 points), Madison Capitols (20 points), Team USA (16 points) and Cedar Rapids RoughRiders (8 points) round out the rest of the conference standings.