FRUITPORT TOWNSHIP – The Reeths-Puffer hockey team has been pretty streaky this season.

The Rockets started out the season with four straight losses, all to state-ranked teams. 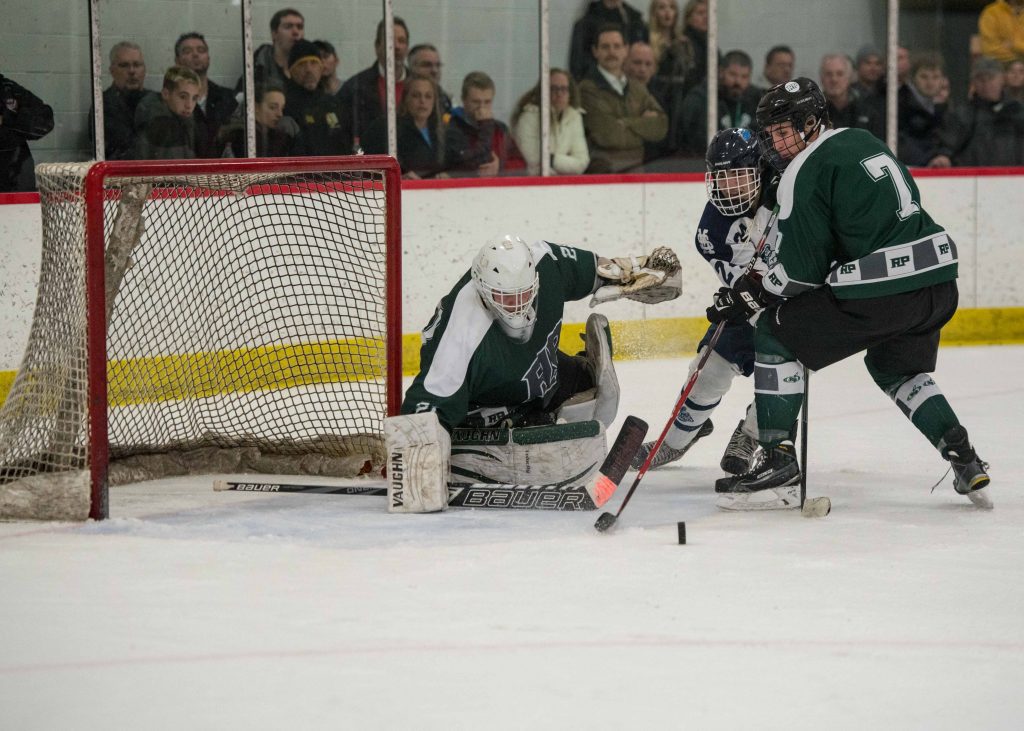 Reeths-Puffer’s extended its winning streak to six against the Sailors, but just barely.

The Rockets lost a late lead when Mona Shores scored and tied the game with 5.7 seconds remaining in regulation. But they salvaged a 4-3 victory at Lakeshore Sports Centre when Logan Homfeld scored his second goal of the game early in the overtime period.

“This team has been very reliable,” said R-P Coach Eric Sikkenga, whose team improved to 6-4 on the season. “We dropped four straight early because we weren’t all together. We were really inexperienced and we had to grow up fast.

“We’ve had a few games where we’ve had to battle through things. We have guys that have won a lot in the past, and are used to winning and know how to make plays. They just have to have some fun playing the game.”

The Rockets started off fast, controlling the offensive zone for most of the first period and taking a 2-0 lead into the first intermission. 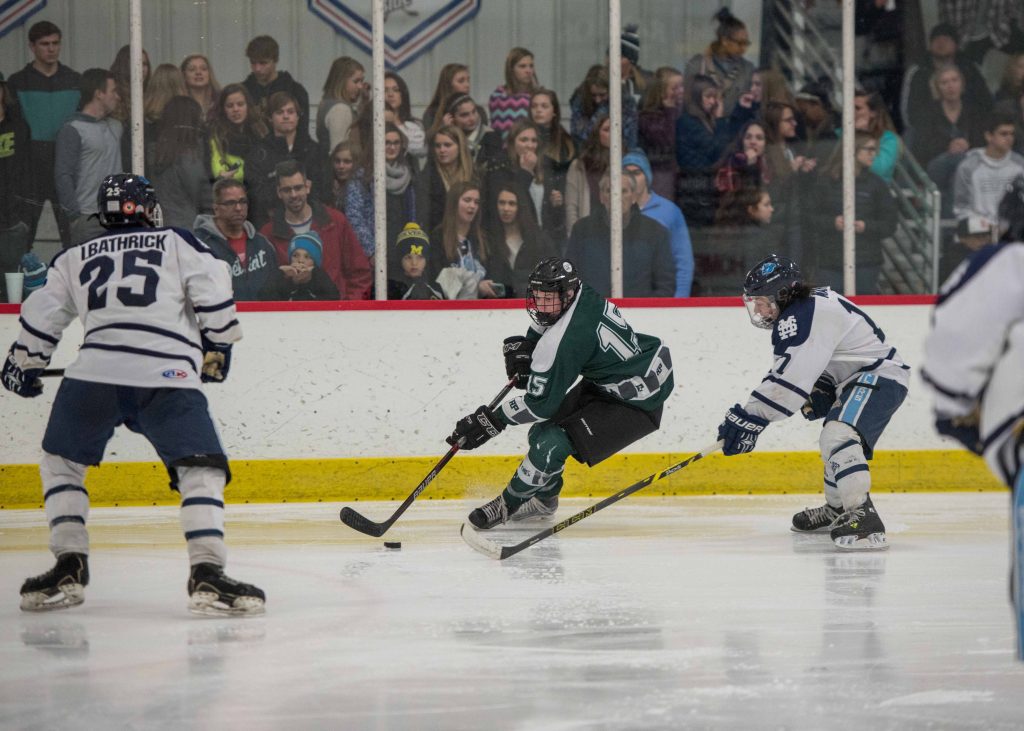 The first goal went in at 4:19 of the period when Garrett Reames blasted a slap shot from the right wing that was initially stopped by Sailor goalie Anthony Shrum. But the puck went airborne after the save and landed behind Shrum in the net.

Connor Weessies and Cole Charlesworth assisted on the goal.

About 10 minutes later, Reeths-Puffer’s Tyler Ruple won a faceoff on right wing and got the puck to Homfeld, who launched a quick wrist shot past Shrum at the 14:27 mark. It was Homfeld’s 6th goal of the season.

“We dug ourselves a hole when we started off slow in the first period,” said Mona Shores head coach Dan Quaine, whose team is now 2-6 on the season, with three overtime losses. “They jumped on us pretty good,”

“The second period we stepped it up and started to pick up our tempo and got back in the game. Any time you have a 2-0 deficit in the first period and you’re clawing back the whole game, it takes a lot out of the kids.” 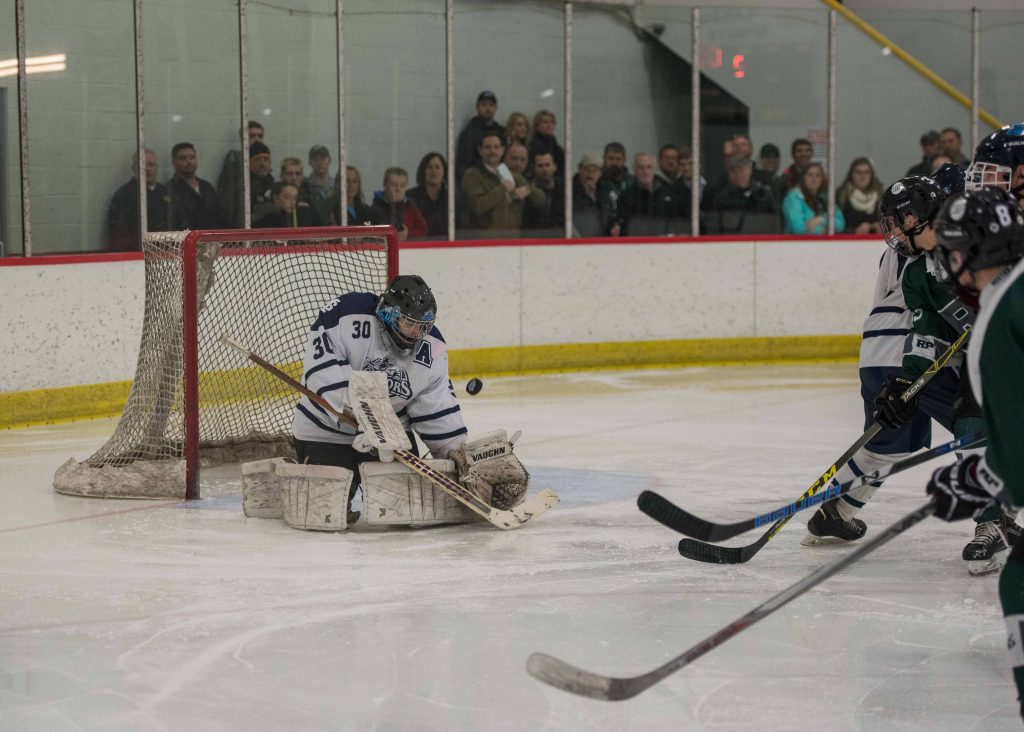 Reeths-Puffer’s Nate Sullivan took a hooking penalty at 3:58 of the second period, giving Mona Shores its second power play of the game.

With just four seconds left on that power play, Shores got on the board on a hard wrist shot off the stick of Spencer Anderson, who was assisted by Matt Martin and Isaiah Bathrick.

The Sailors struck again at the 13:32 mark with another power play goal. Bathrick was alone to Shrum’s right and centered a pass to a waiting Zac Cuthbertson, who scored to tie the game at 2-2. Bathrick and Hunter Meyers were credited with assists.

Reeths-Puffer reclaimed the lead with a power play goal from Mason Convertini with just 44 seconds left in the second period. Chase Mastella earned the assist on the play.

But Mona Shores was not done.

The penalty bug hit the Rockets again with 1:18 left in the third period when Charlesworth was called for interference. Less than a minute later, Reeths-Puffer’s Ruple got a hooking penalty, giving the Sailors a 5-on-3 edge.

Mona Shores then pulled its goal for a sixth skater.

The Sailors cashed in on their big advantage with only 5.7 seconds left on the clock when Martin scored with an assist from Cuthbertson.

Mona Shores opened overtime with 1:28 left in its power play, but failed to take advantage.

Reeths-Puffer finally won when Charlesworth passed to Homfeld, who scored with a quick shot to end the game just 47 seconds into overtime.

“I think the team knew we had to put our heart in it to win the 1game, so we did,” Homfeld said. “I don’t think I’ve ever had an overtime goal, especially against a rival, so that was pretty cool.” 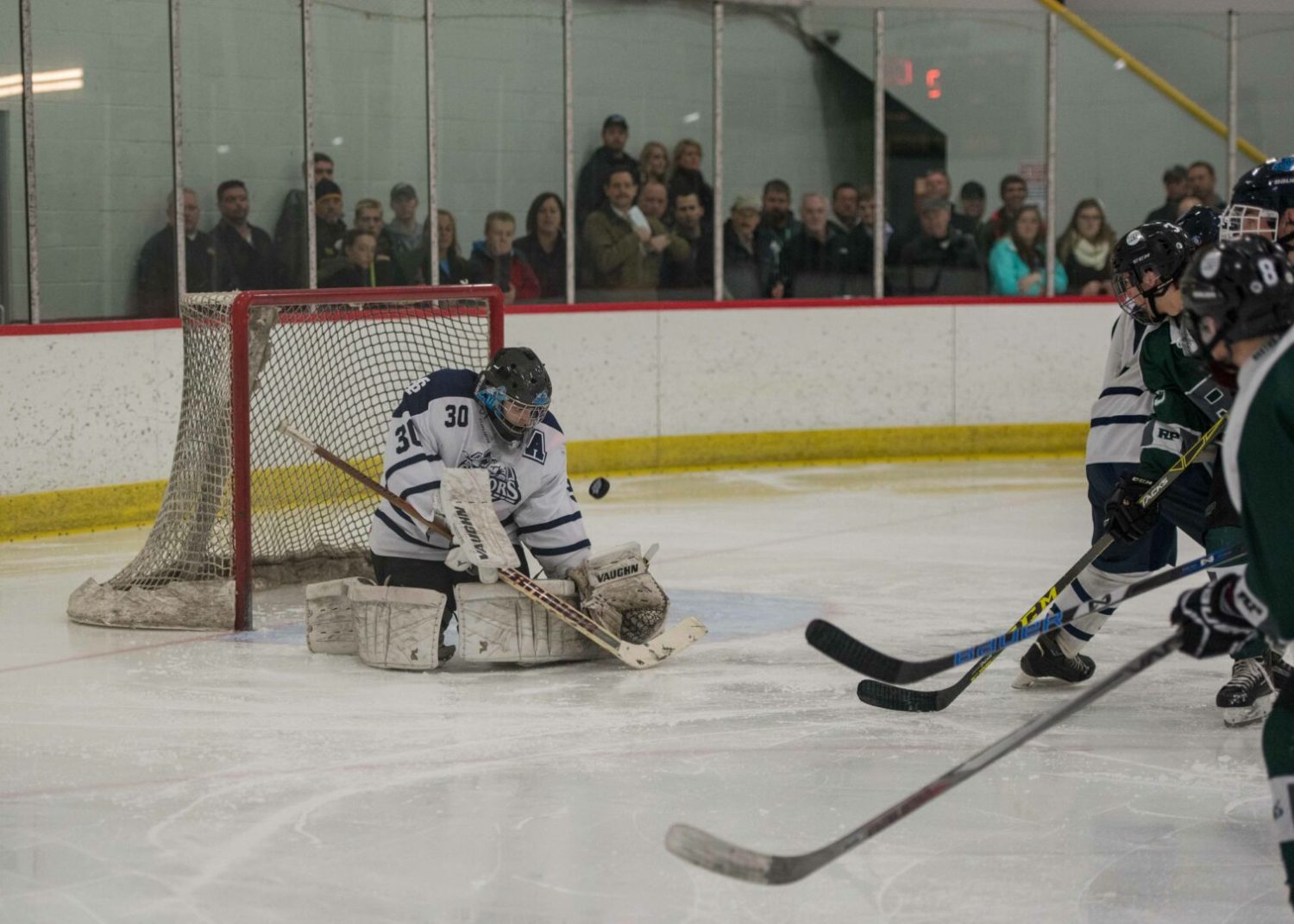 Anthony Shrum deflects a shot high and away. (photo/Eric Sturr) 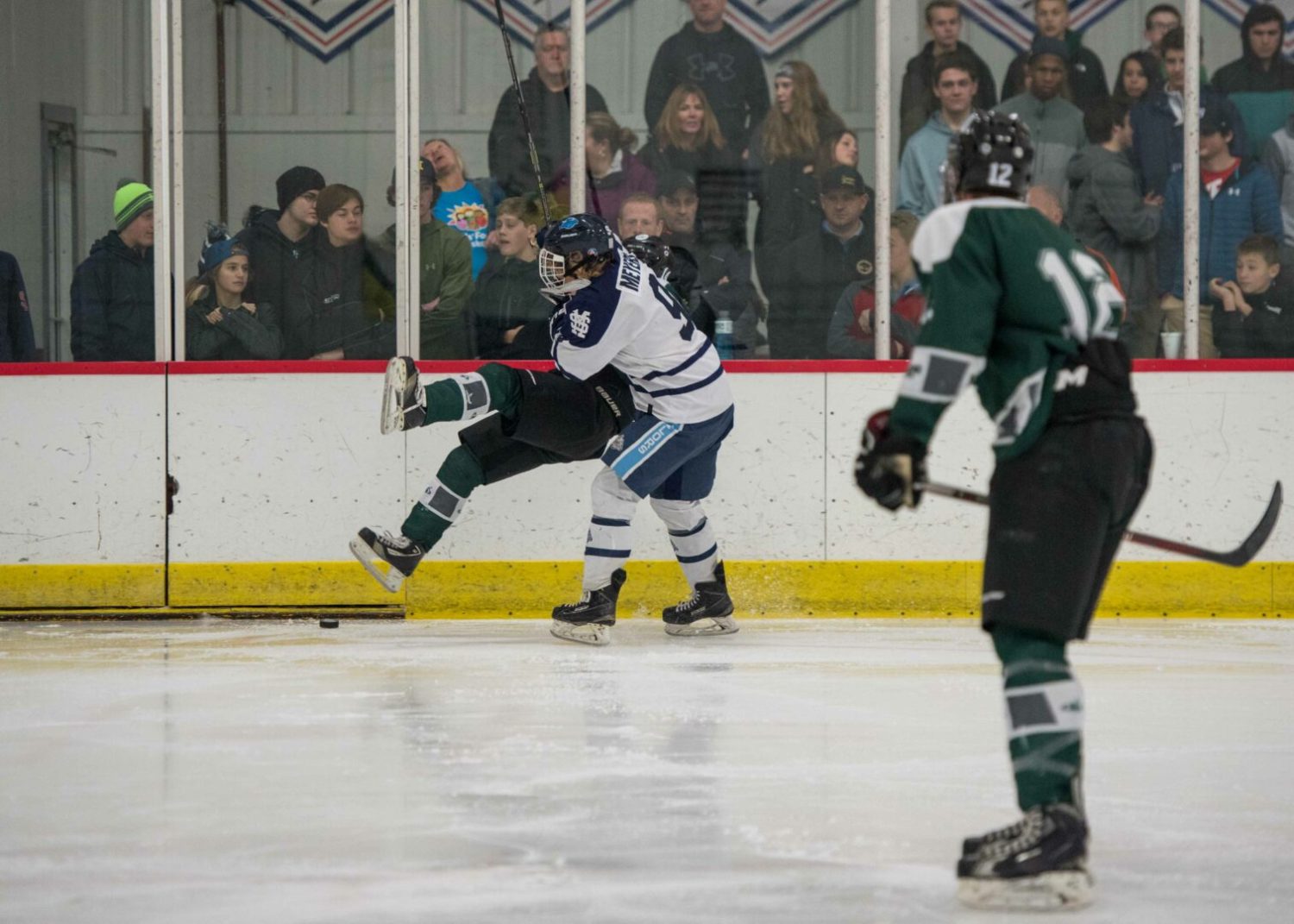 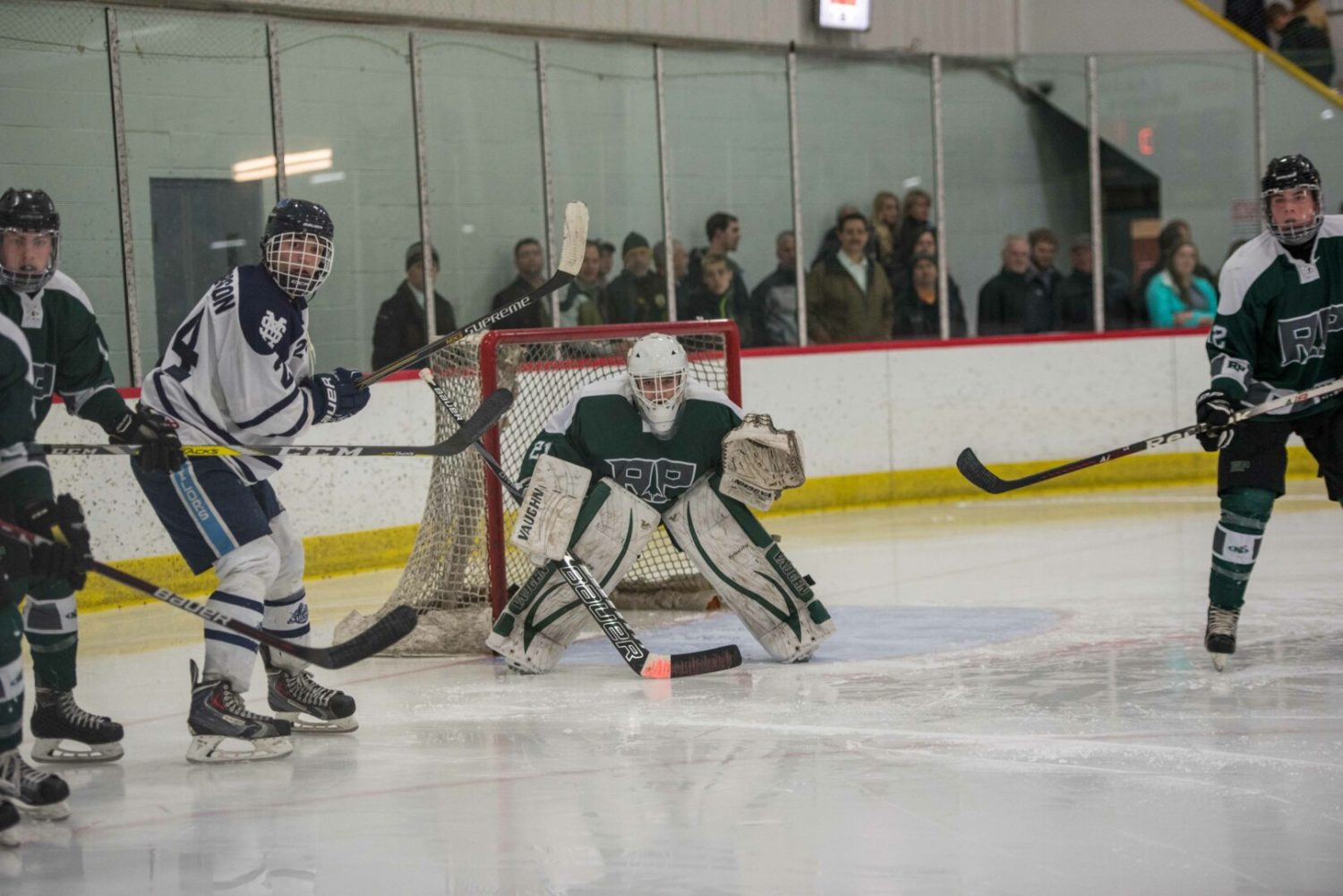 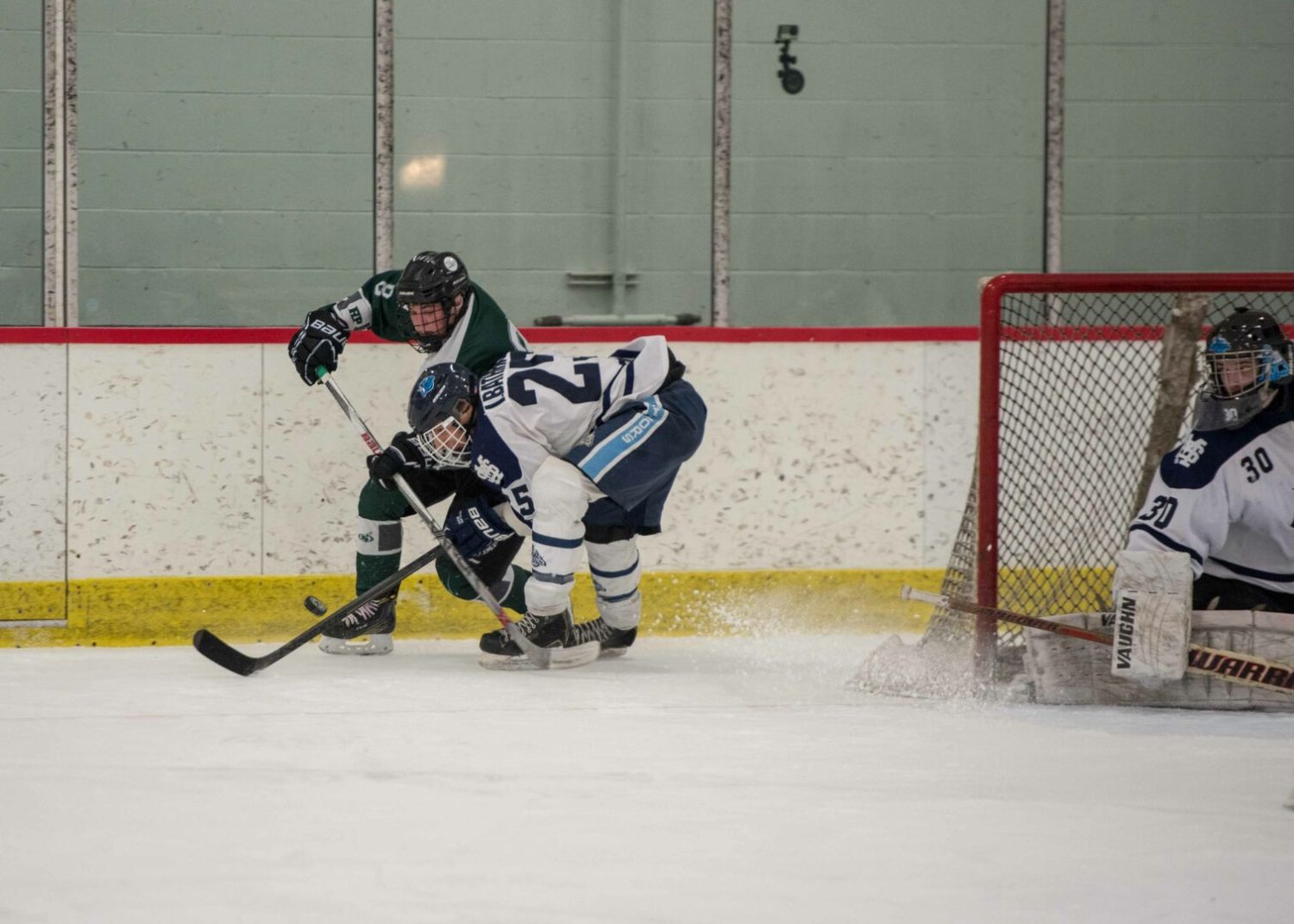 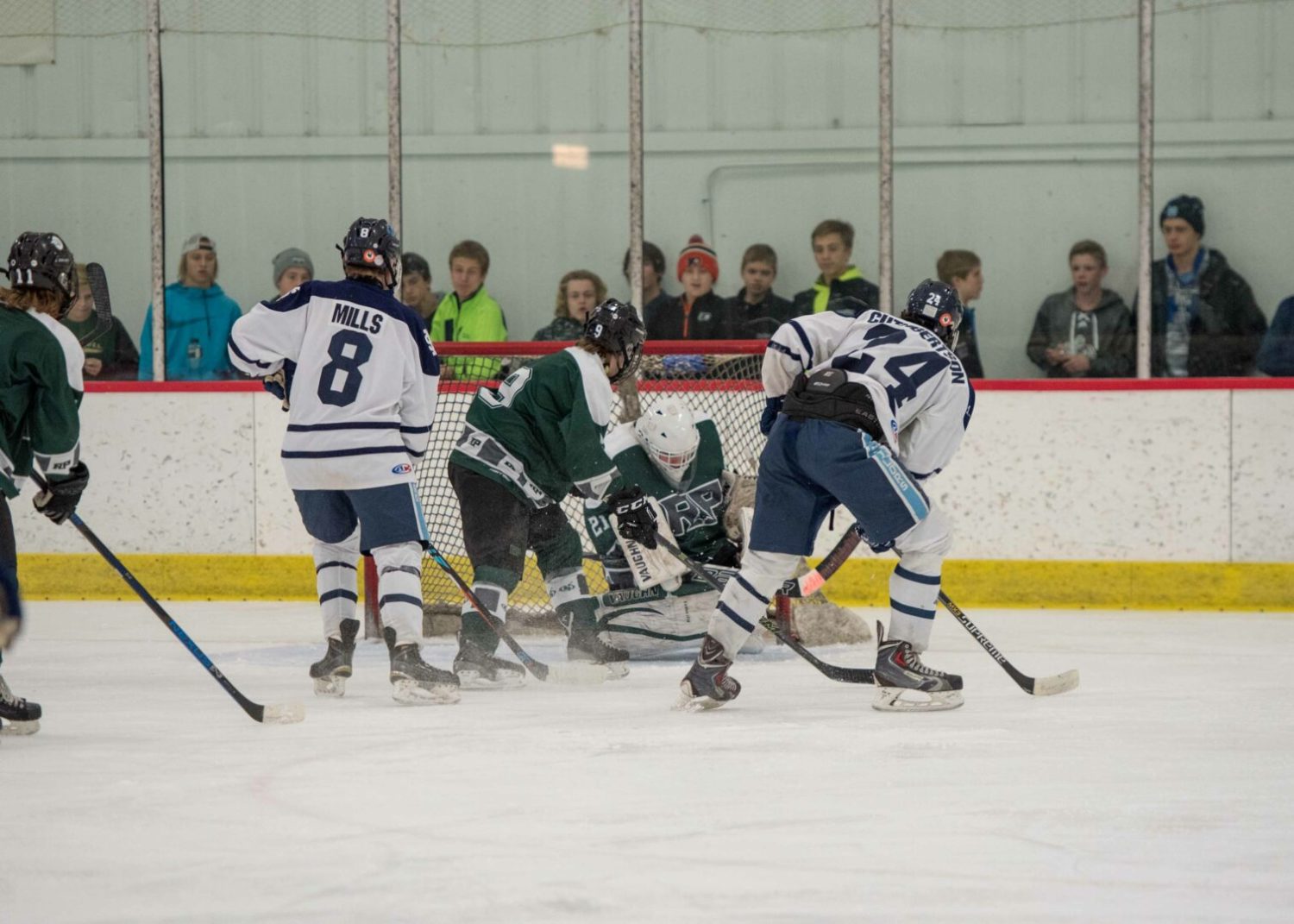 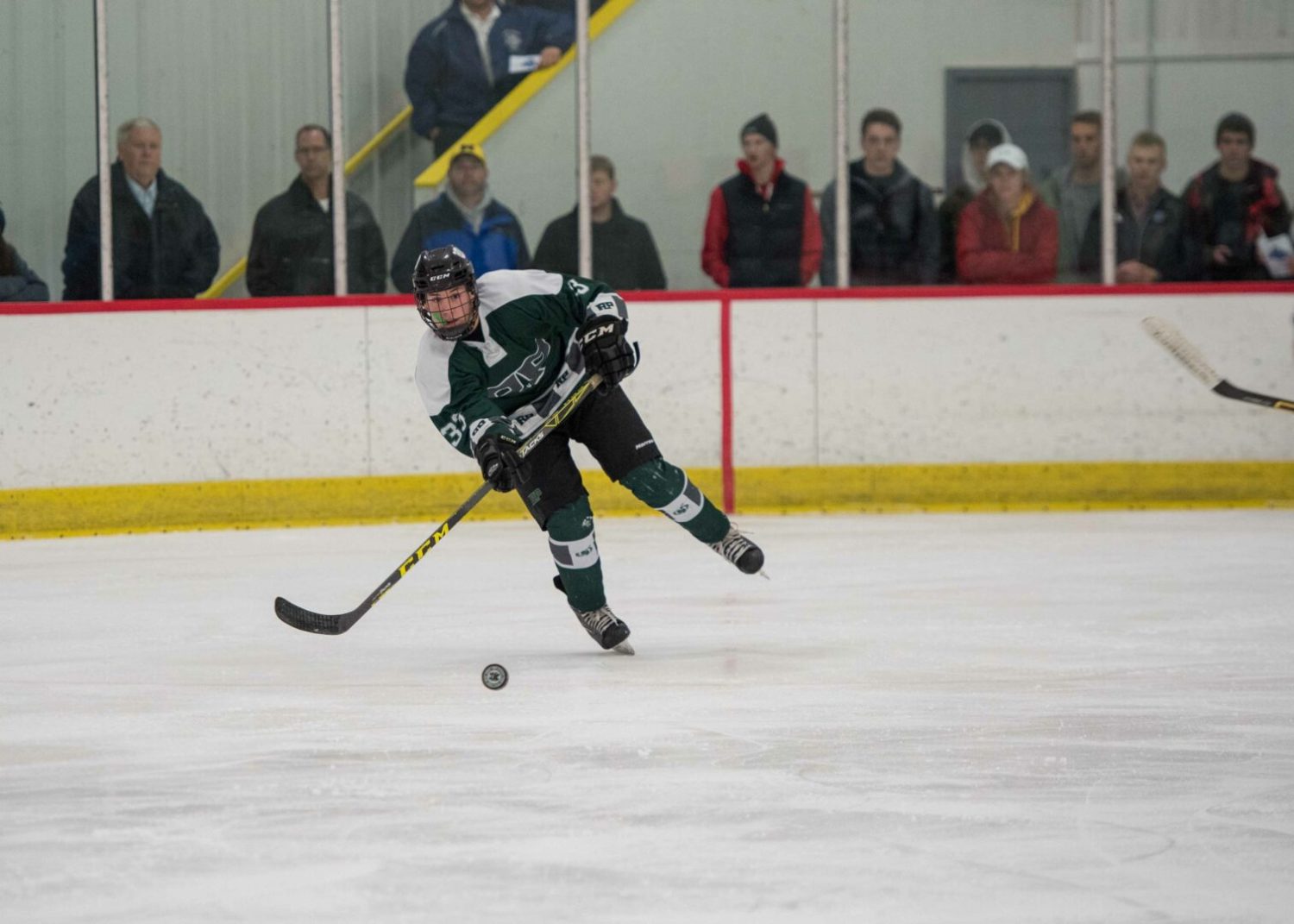 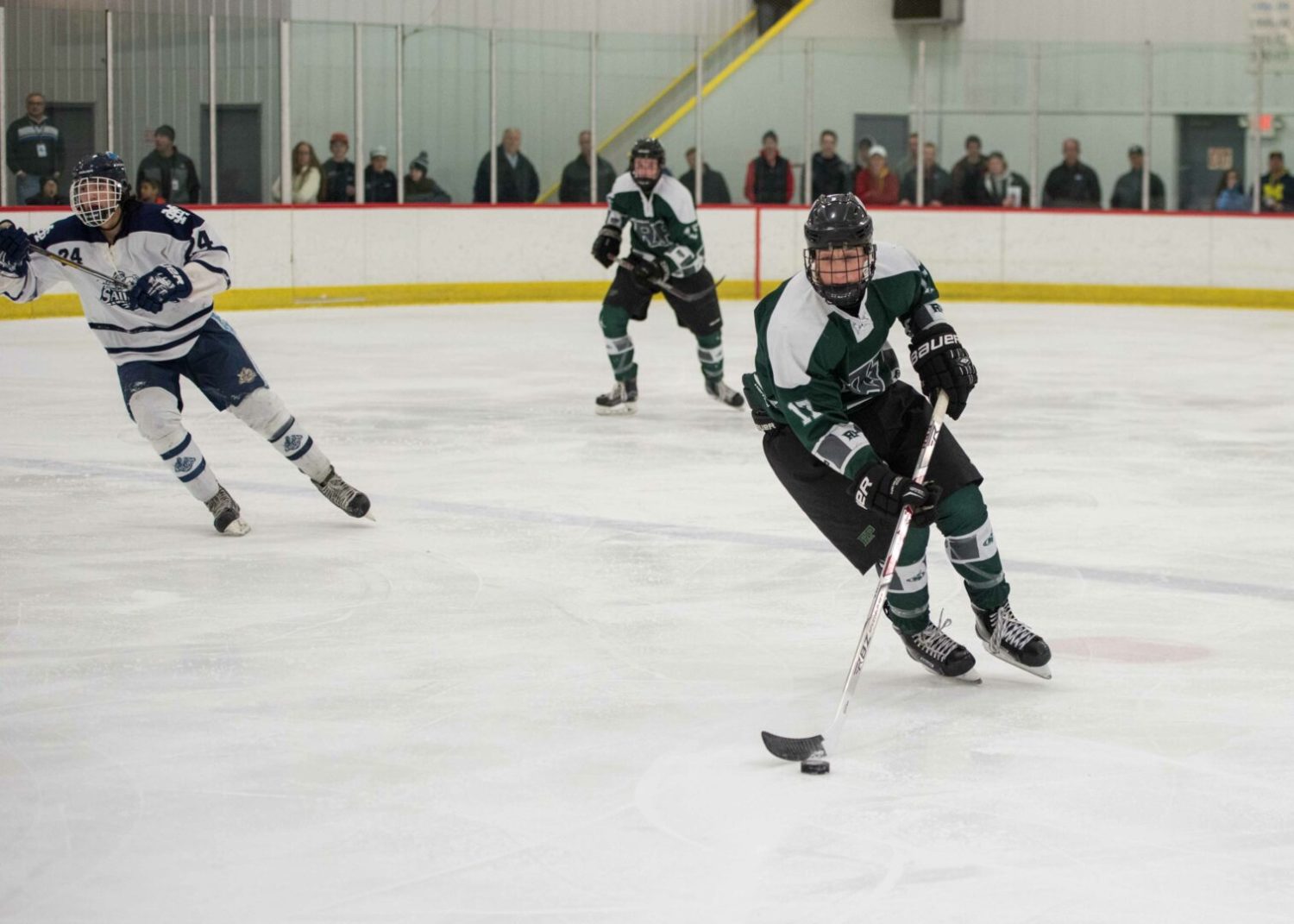 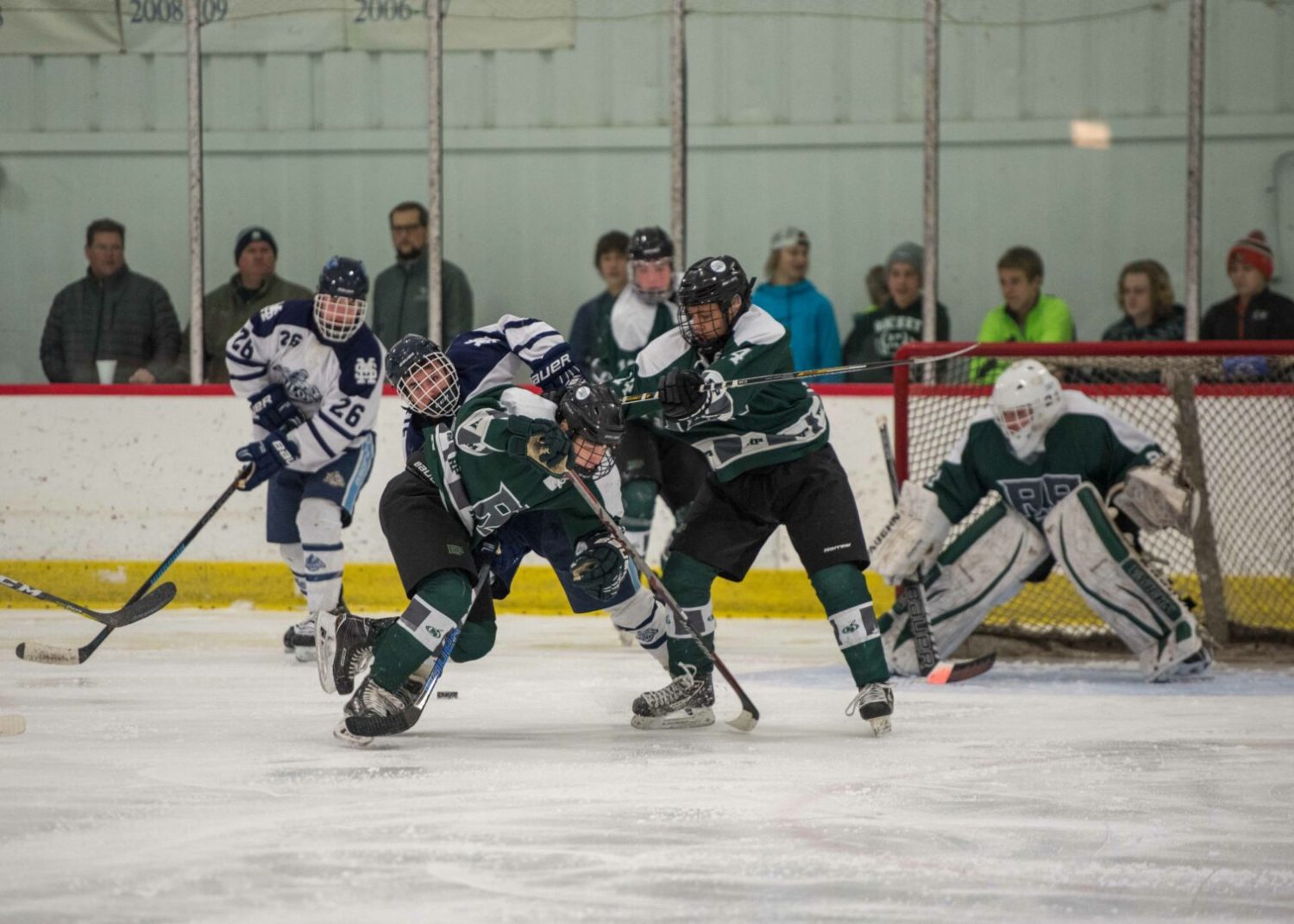 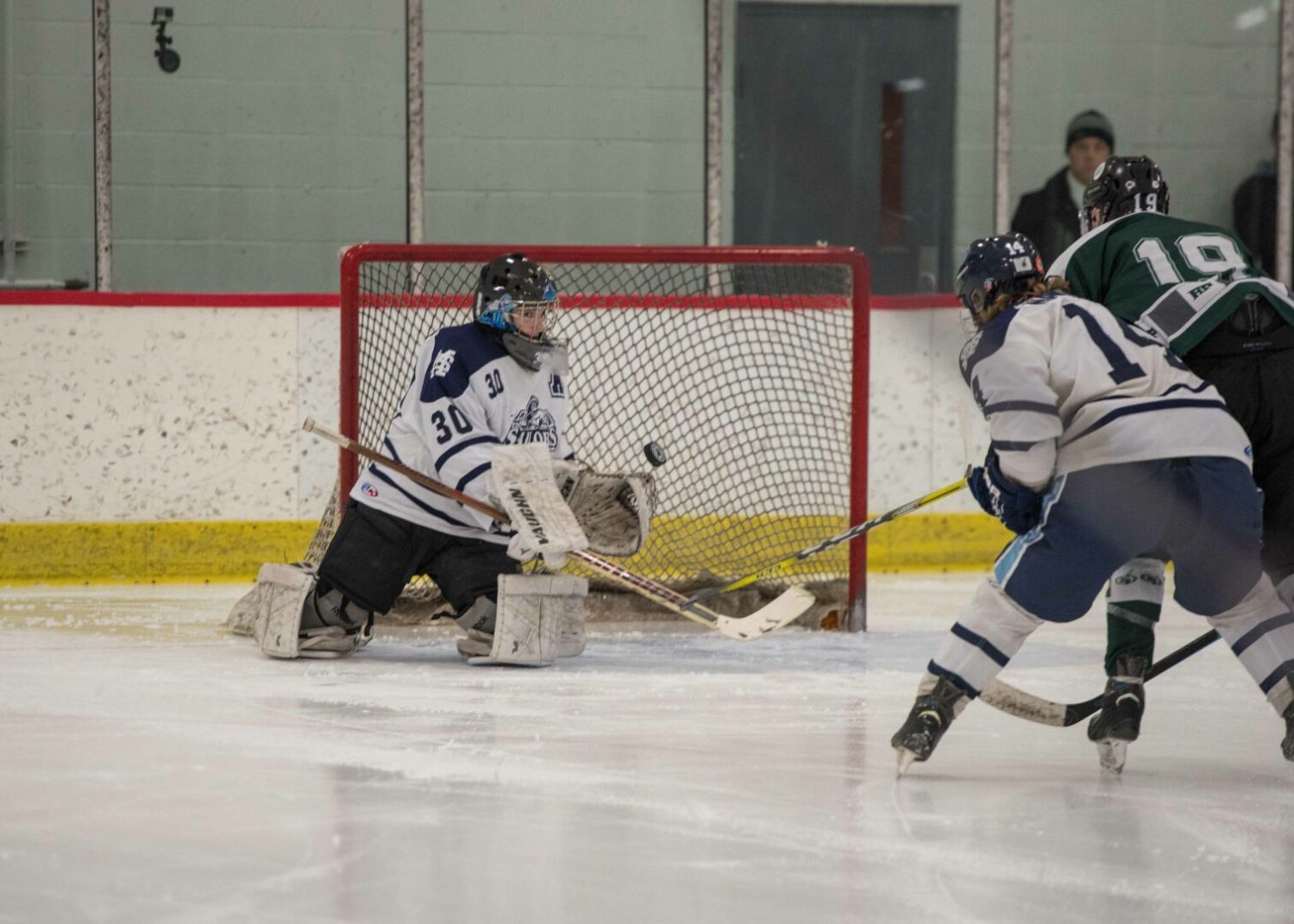