LUDINGTON – Calvin Hackert is finally back home in Ludington, playing with the guys he grew up with.

It took longer than he expected – and he couldn’t return with his parents, as originally planned – but he’s making a big difference for the Orioles’ undefeated varsity basketball team this season.

Rewind to August 3, 2015, when Hackert was living in Brandenburg, Kentucky.

It was an average weekday afternoon. The school year had already started in Kentucky, and most kids were tucked away in classrooms across the state. 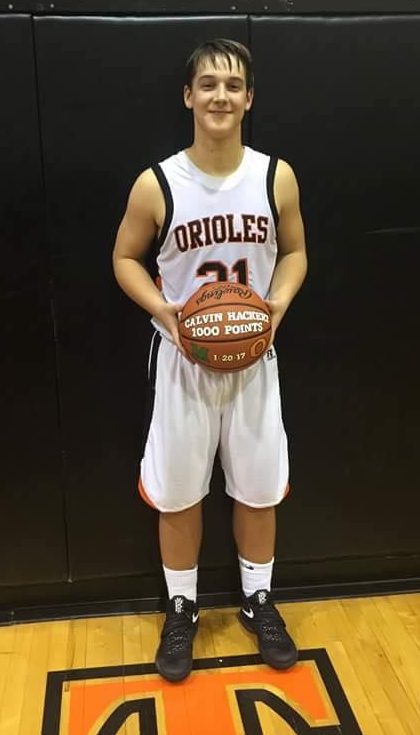 But Hackert, who was about to become a high school junior, was at work. That was because his mother, Dina Hackert, had been named the new boys varsity basketball coach in Ludington, the town where he grew up.

The family was preparing to move back to Michigan, where the start of the school year was still a few weeks away, so Hackert figured he would make a little money in the meantime.

But when his mother came to visit him at work on that particular August afternoon, something seemed wrong.

“I remember it like it was yesterday,” Hackert said. “Mom came into my work and gave me the news, and told me (the move back to Ludington) wasn’t going to work out. I remember leaving work and going to get school supplies, because suddenly I had to go to school the next day.”

Something in Hackert’s school transfer process had gone wrong. He found out that if he moved back to Ludington, he would be ineligible for most of the 2015-16 basketball season.

That was something that neither he, nor his mother, were willing to accept. So his mom resigned from the coaching job in Ludington before she ever got started, and the family stayed put.

“There comes a time when, as a parent, you must sacrifice and put your dream on hold for your child,” Dina wrote to the Ludington Daily News after resigning the varsity job in 2015.

“There was no doubt in our minds that it would not be wise for Calvin to be ineligible for a good part of his junior season. So by resigning, it enabled my son to go back to Meade County High school (in Kentucky) to ensure a full junior season.”

The news was a huge letdown for Hackert, who had spent part of the previous summer back in Ludington, practicing with his old friends that were supposed to become his new teammates that winter.

“It didn’t seem real at first, and when it finally started to kick in it really had me down for a while,” he said.

Hackert played for Meade County that winter, and had a good season, averaging about 12.5 points per game. He ran up his two-year yarsity scoring total to 878 points, and was poised to have a big senior season.

But even with his success in Kentucky, a basketball-crazy state, Hackert still had to urge to return to Ludington, the place he calls home.

He finally had the opportunity to return this year. As an 18-year-old, he had the legal right to move away from his parents and move back to Ludington, live with his aunt and uncle, and rejoin the team of his dreams.

After having a long talk with his parents, he decided to make the move. The homecoming has been everything he thought it would be. 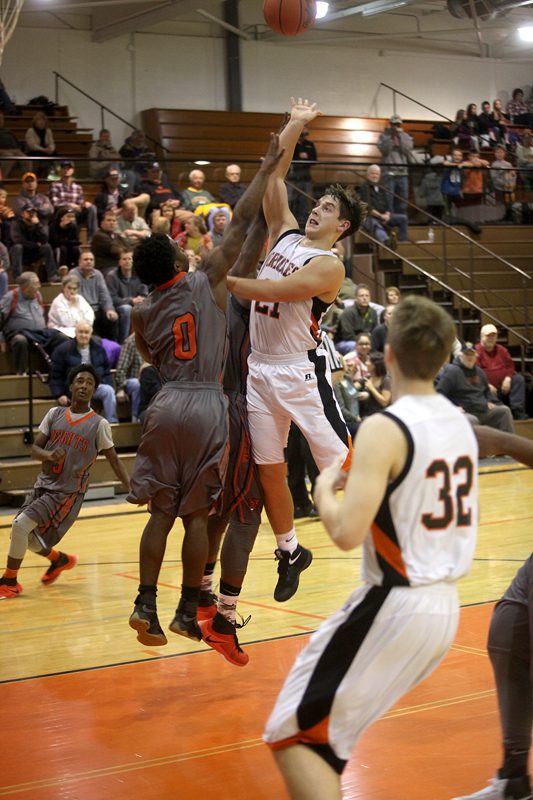 “It’s been awesome, really a dream come true,” said Hackert, a 6-foot-1 guard. “It just feels good to be back home to play my senior year. Leaving, you don’t think you’re going to get to play with those kids ever again.

“I loved my school in Kentucky. I made a lot of great friends and I have a lot of family down there, and I love it down there. But growing up here, my heart is here, and I really love Ludington.” –

The move has certainly worked out great for the Orioles. Hackert is averaging more than 15 points and four assists per game, and has helped Ludington get off to a great start with a 9-0 record this season.

His coach, Thad Shank, is very happy to have him back home.

Shank previously coached the Ludington boys varsity team from 1999 to 2012, before moving on to coach the girls varsity. He took the boys job back last winter, after Hackert’s mother was forced to decline the position.

“I hadn’t seen him play since junior high,” Shank said about Hackert. “But from what I had heard from other people, he was a very skilled basketball player.

“Calvin is special because he has the ability to score, but at the same time he can initiate offense and keep everyone involved.

Before moving to Kentucky in the seventh grade, Hackert had shown signs of significant basketball talent.

While at ­­­­Meade County, that talent began to blossom, and it’s fully evident to everyone who watches him play this year at Ludington.

He credits his mother and his oldest brother, Travis, for his development on the court.

Dina Hackert led the Hope College women’s team to a national championship during her playing days. She later coached Calvin’s fourth-, fifth- and sixth-grade youth teams – which included many of his current teammates at Ludington – as well as the varsity girls teams at Mason County Central and Ludington.

“Ever since I could walk I’ve had a basketball in my hands, walking around the gym with my mom and her team,” Hackert said. “She just always had me in the gym.

“And Travis is a big role model in my life for basketball. He’s a coach at UNC-Wilmington for the basketball team. He’s had me in the gym plenty of times in my life. They’ve really molded me into the player I am today.”

Hackert hit a milestone on Jan. 20, scoring his 1,000th career varsity point in a victory over Muskegon Catholic. His best offensive game of the season came on Jan. 13, when he scored 28 points against Manistee.

Hackert and the Orioles are currently leading the Lakes 8 Conference, and are expecting a big test on Feb. 7, when they face state-ranked Big Rapids in a non-conference game.

“Winning has been fun. We’re just trying to go out there and get better at everything we do every game, and focus on playing together defensively and offensively.”