MUSKEGON – The Muskegon Lumberjacks having been heating up over the past couple of weeks, winning five of their last six games and remaining in the

thick of the USHL playoff race.

A big reason for their recent success has been the brilliant play of their young goaltenders, Keith Petruzzelli and Adam Brizgala, who have been sharing time between the pipes since the beginning of the season. 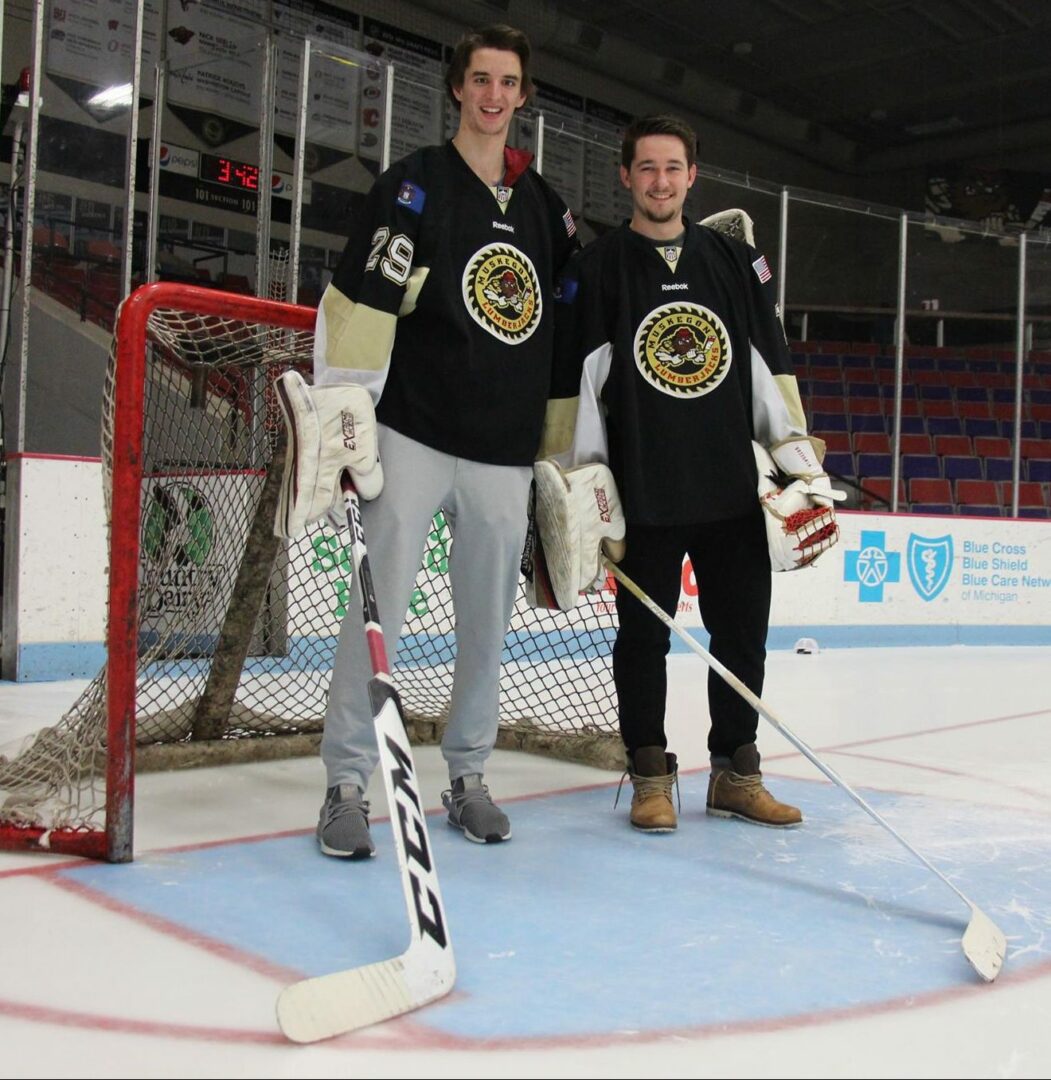 That wasn’t the original plan.

Lumberjacks Coach John Lafontaine  named Brizgala the starter following training camp, but he struggled to start the season and Petruzzelli was quickly put into the rotation.

They both had their ups and downs throughout the first half of the season. But they’ve both been playing with poise and confidence for the past few weeks, helping the Jacks win games they might have lost a month or two ago.

“Ideally it is nice to have a true number one goalie with a young backup,” said LaFontaine, whose third-place team will host fifth-place Green Bay on Friday and Saturday at 7:15 p.m. at L.C. Walker Arena.

“But any coach would love to have two goalies competing hard for the starting spot. We as a team have watched both goalies get better as the season progresses.”

Brizgala has been on fire in his last three starts, allowing just two goals on 91 shots and posting a 3-0 record. 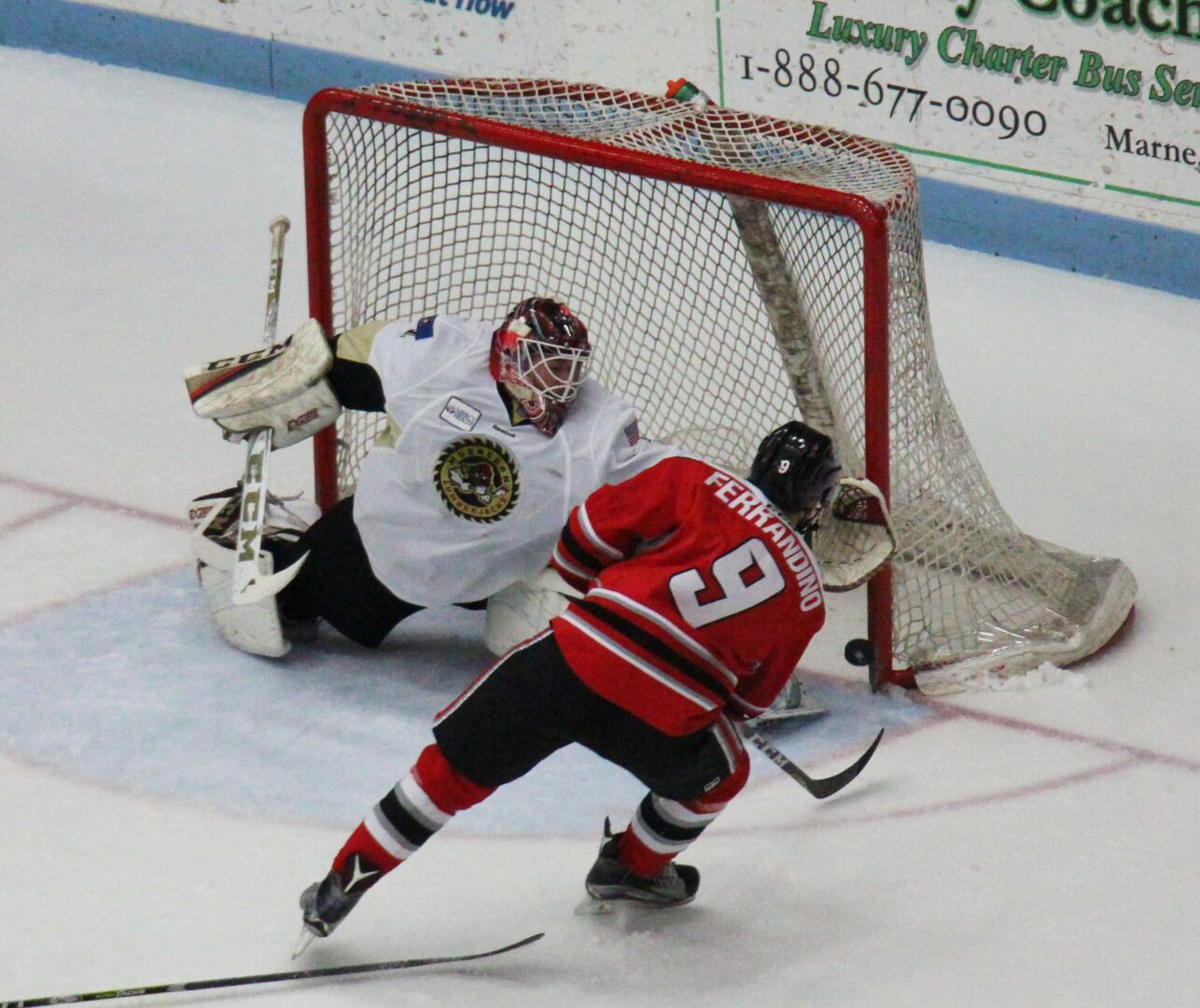 Adam Brizgala prepares to make a glove save in a recent game.

The 18-year-old native of the Czech Republic got hot at the perfect time for the Jacks, stopping 39 of 40 shots in an important 3-1 victory over the first-place Chicago Steel on Jan. 7.

Brizgala continued his strong play last Saturday in Madison, nearly posting a shutout before allowing a single goal with 1:24 remaining in the game. He ended up stopping 28 of 29 shots in the Lumberjacks’ 4-1 victory.

He finally earned his first career USHL shutout on Monday afternoon, stopping all 22 shots he faced in a 3-0 Muskegon victory over Team USA.

Brizgala has a 9-5-2 record with a 2.70 goals against average, a 90 percent save percentage and one shutout in 17 games.

He said he wasn’t surprised by his rusty play at the beginning of the season, because he suffered a knee injury that required surgery while playing in Europe last season. 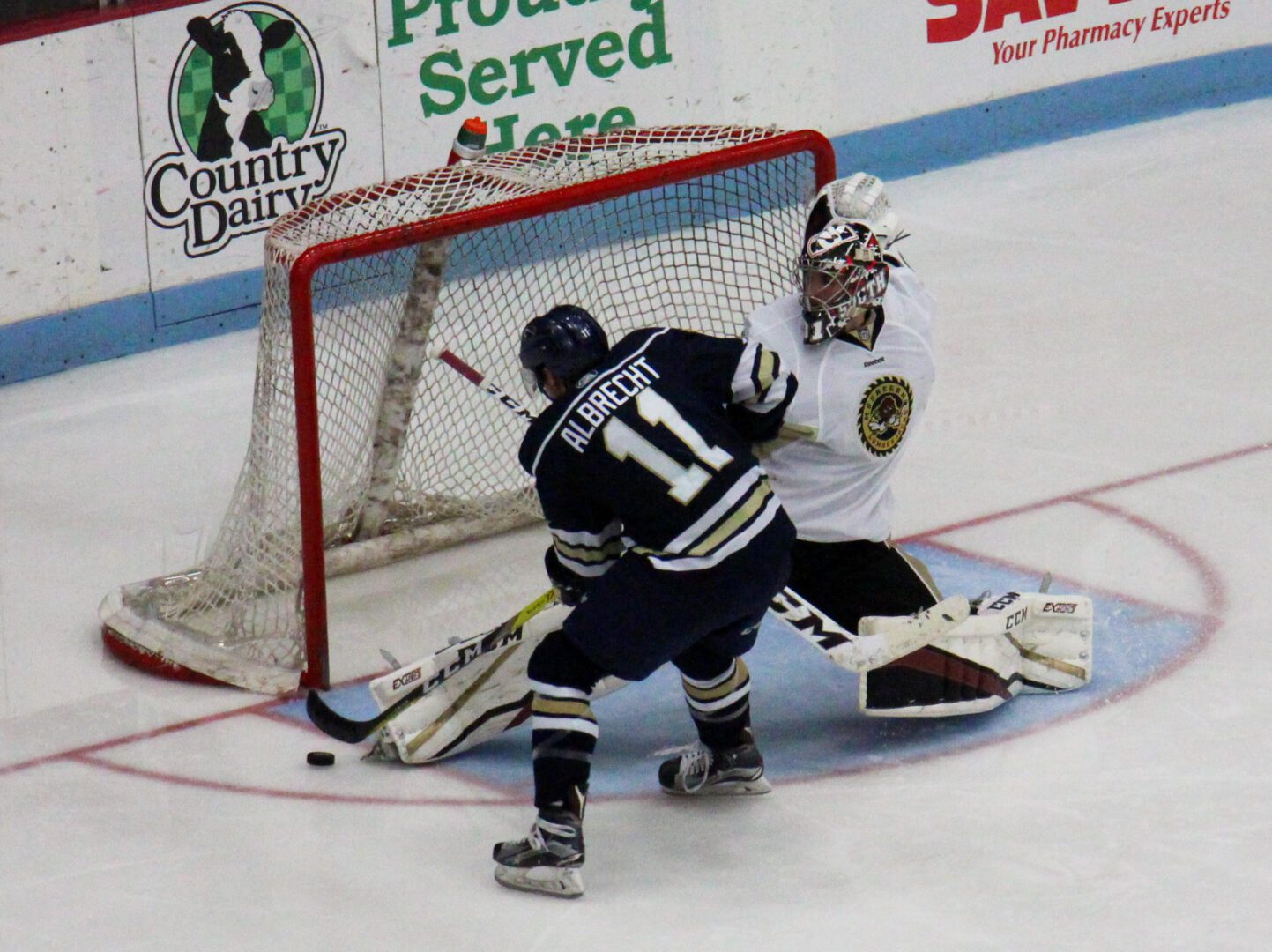 Keith Petruzzelli makes a pad save for the Jacks.

He also said it also took some time to get used to the North American game.

“There are a lot more shots because the rinks are smaller than in Europe,” Brizgala said. “I was frustrated at first, but I knew I had to start slowly and train more off the ice.”

Petruzzelli, 17, a 6-foot-6 netminder from Wilbraham, Massachusetts, has posted a 2-1 record in his last three starts, allowing nine goals on 92 shots.

He continued his solid play the following weekend in a 6-3 victory over the Youngstown Phantoms. He stopped 28 of 31 shots and allowed just one goal thorough 2 ½ periods, before the Phantoms struck for two late tallies.

Petruzzelli has an 11-7 record on the season with a 2.71 goals against average, a 90 percent save percentage and one shutout in 20 games.

Petruzzelli had a special experience in the 2017 USHL Top Prospects Game in Sioux Falls, South Dakota on Jan. 10, representing the Lumberjacks on the Eastern Conference team.

He had a great outing, stopping all 22 shots he faced over 27 minutes. He was named the top star for the Eastern Conference team.

“It was a great experience and a lot of fun,” he said. “The team played great, which was a huge help and made my job a lot easier.”

Brizgala and Petruzzelli both became goalies at very young ages, and both are counting on being drafted by National Hockey League teams in the near future.

“I started at age four because my mom wanted me to play a sport because I was too hyperactive,” Brizgala said. “I liked how goalies looked different from the other players on the ice.”

Petruzzelli became a practice goalie for his older brother at home, and naturally grew into the position.

“Our parents got us into hockey and my brother needed a goalie to shoot at,” Petruzzelli said. “It got pretty heated between us sometimes, but it helped us both out a lot.”

The two goalies say they have no problem sharing playing time, particularly since it’s working well for the team.

“We want to start but you are playing for the team,” Brizgala said. “You have to prepare every day the same way, regardless.”

“Being a full-time starting goalie can have its negatives,” Petruzzelli said. “It can make you too complacent, which can lead to slacking off at practice.”

While LaFontaine is clearly happy with the play of both goalies at the moment, he said he is not necessarily committed to having a two-goalie rotation throughout the season.

“Not if one of them takes the reins,” the coach said.

Jayhawks finish ninth after third round at NJCAA nationals