But the Big Reds are still a team to contend with, which they demonstrated on Tuesday night with an exciting 51-48 upset of Reeths-Puffer on their home court. 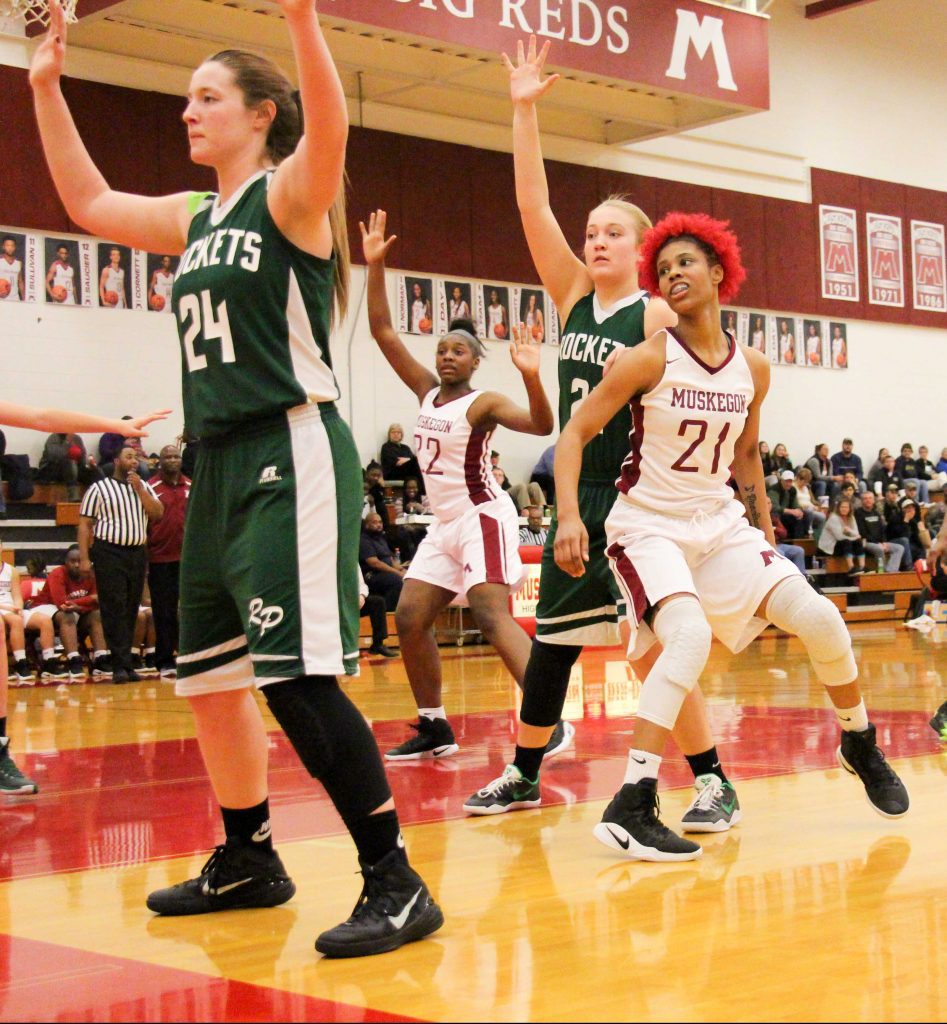 Tierra Williams posts tries to post up for Muskegon on the out of bounds play while RP’s No. 24 Brooke Larabee and Delaney Bolles defend. Photo/Jason Goorman

Muskegon had to rally from an early nine-point deficit to capture the victory.

“We were looking to have a faster start than we had,” said Muskegon head coach Rodney Walker, whose team is now 3-1 in O-K Black play and tied for the conference lead with Reeths-Puffer and Mona Shores. “I thought we stayed poised enough to get back into the game.”

The game looked promising in the opening minutes for Reeths-Puffer, which jumped out to a 9-0 lead. The Rockets hit their first four field goal attempts, with four different players scoring.

Muskegon finally got on the scoreboard with 2:39 left in the first quarter, then quickly got into the swing of things, outscoring the Rockets 11-2 in the rest of the quarter to force an 11-11 tie at the buzzer.

The Rockets regained the lead less than a minute into the second quarter, and were up by six at the midway point, but Muskegon fought back and cut its deficit to 22-19 at halftime.

The Big Reds took their first lead, 23-22, on a Rahmeen Hamilton 3-pointer with 5:50 to play in the third quarter.

The team’s traded buckets for the rest of the quarter. The Rockets took the lead back in the final minute when Shelby Springer was fouled on a layup that went in, then hit the free throw to give her team a 34-32 edge at the break.

The lead changed hands four more times in the fourth quarter, before Muskegon went up 43-41 on a Paula Burr three-pointer with 3:21 to play. The Big Reds, who had four triples in the final quarter, held the lead the rest of the way.

Muskegon, which is 5-4 overall on the season, was led by Daz’Sha Day with 13 points and Tierra Williams with 11.

“It went back and forth all night,” Walker said. “Defense is really our identity this year. We’ve got athletes to make plays, so we make sure we try to get turnovers and capitalize on those turnovers to be able to compete.”

Reeths-Puffer played without head coach Brandon Barry, who missed the game due to illness.

“It was a tough one,” said Reeths-Puffer assistant coach Rachel Kent, whose team fell to 8-3 on the season. “It’s tough when your coaching staff is different, even though I’m around all the time.

“He’s usually the one they’re used to hearing from the sideline. We’re not making excuses. We needed to do our job and we just didn’t finish it tonight.” 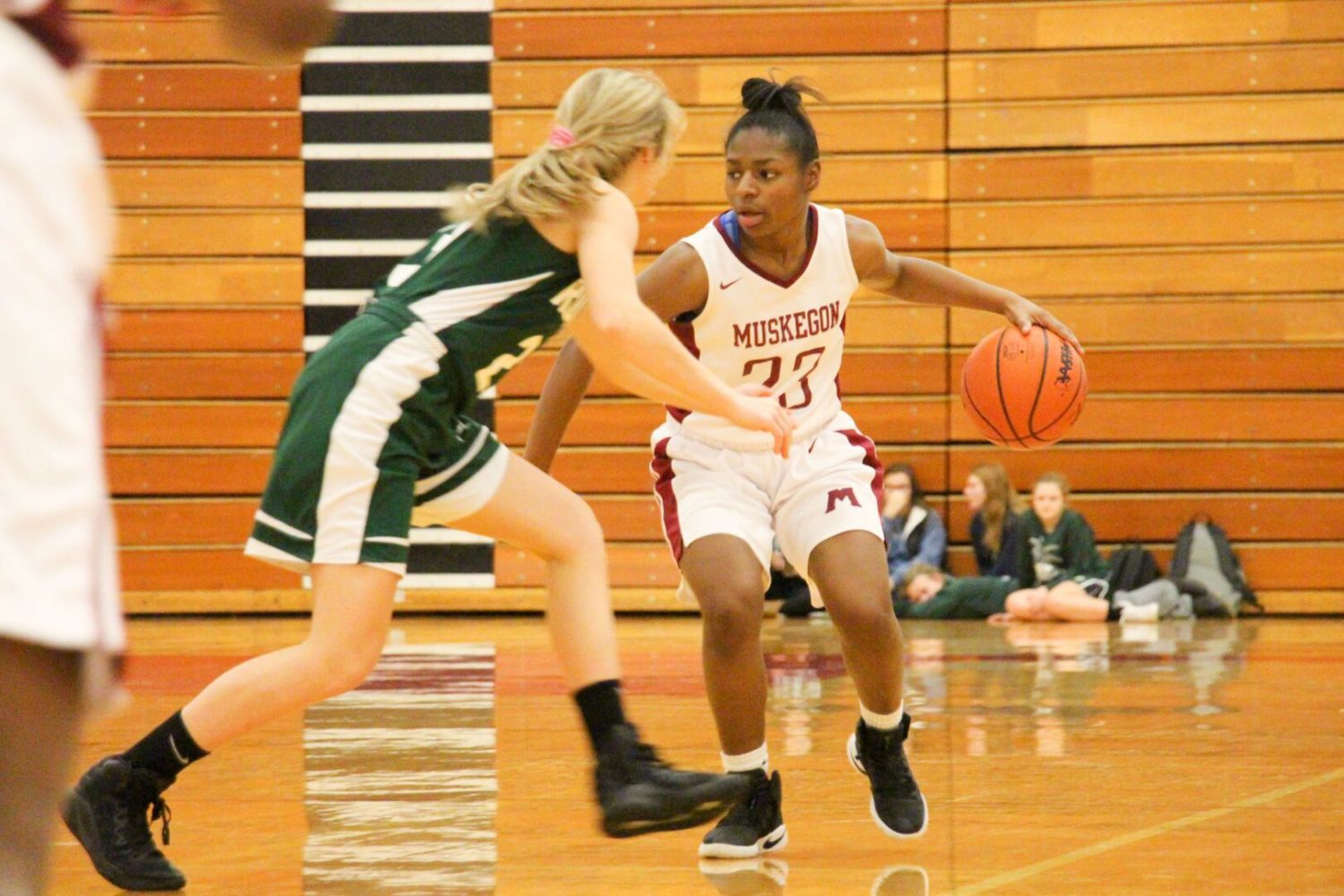 Sparkle Woods dribbles up the ball for Muskegon. Photo/Jason Goorman 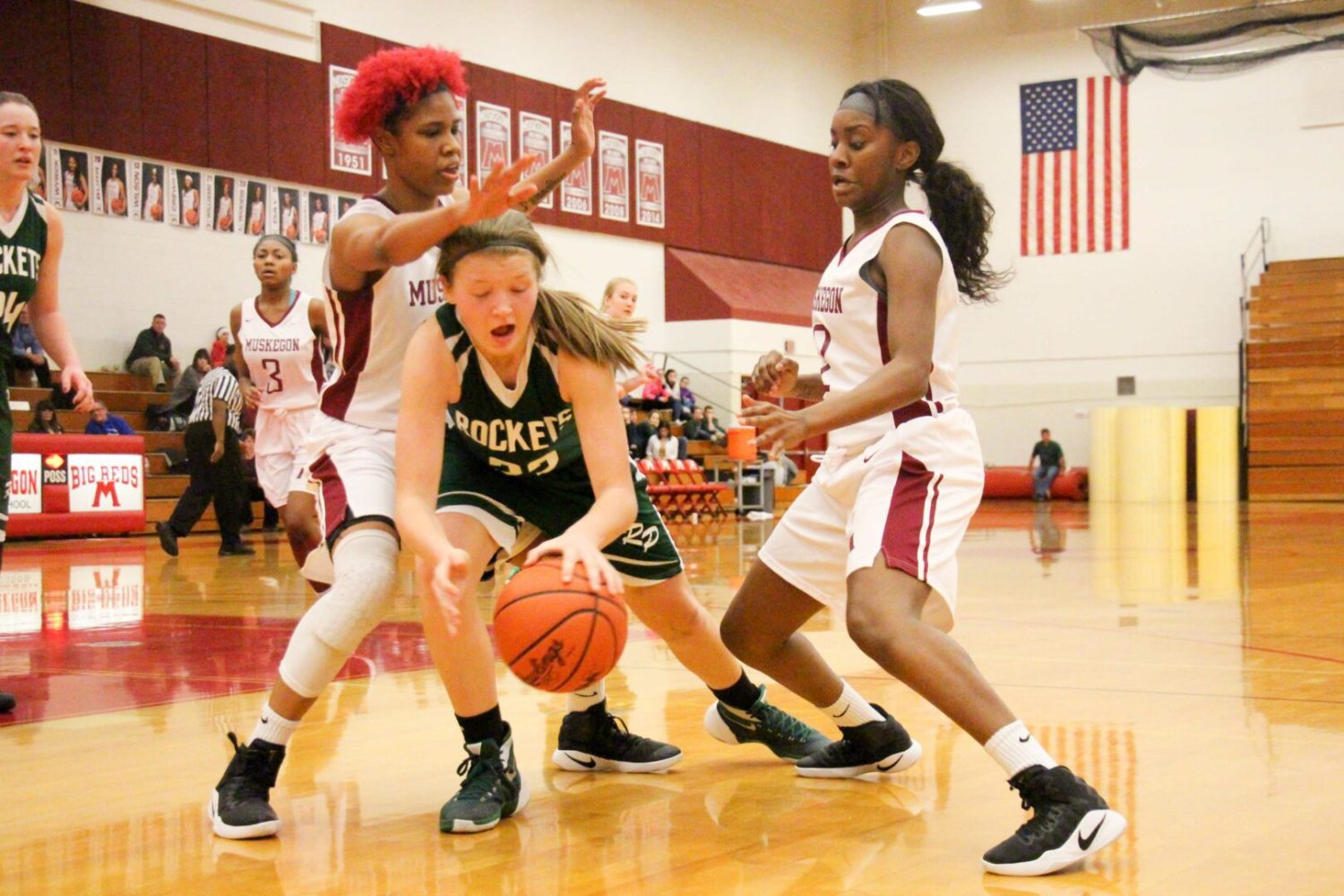 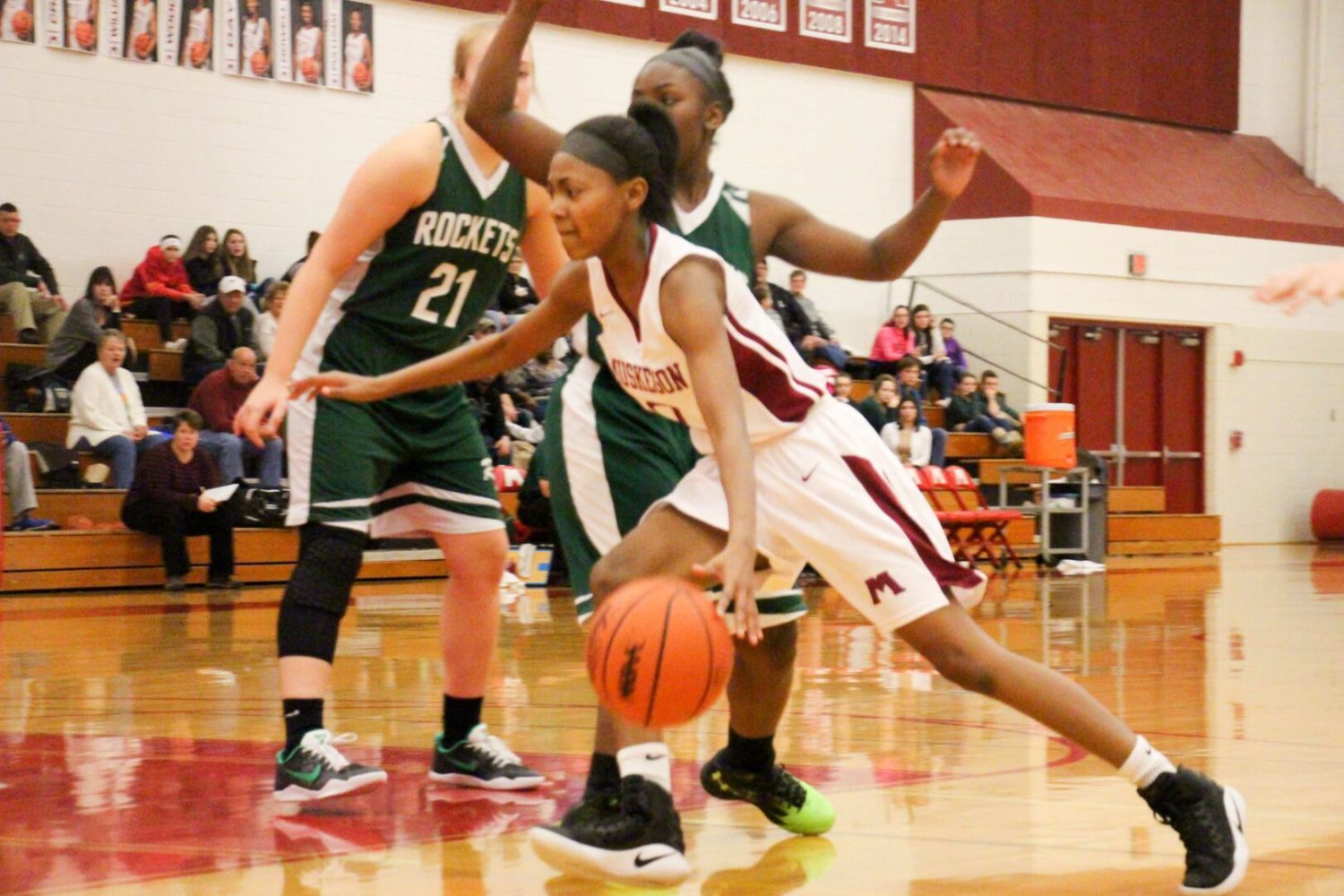 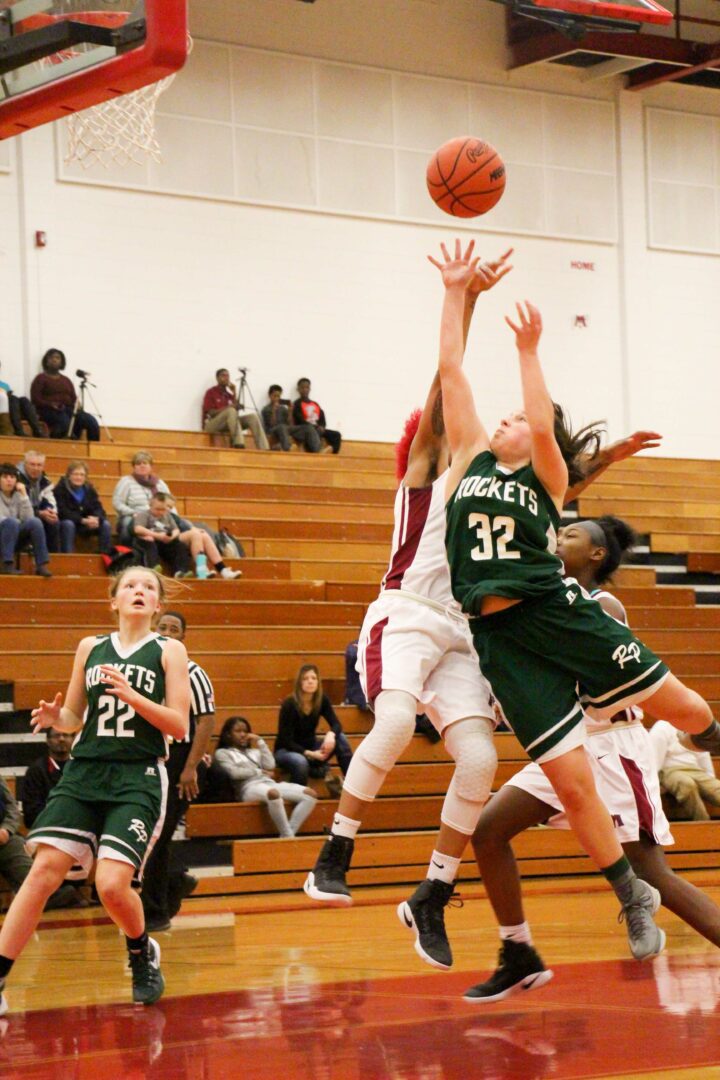 Elysia Mattos gets fouled on the drive through the lane for Reeths-Puffer. Photo/Jason Goorman 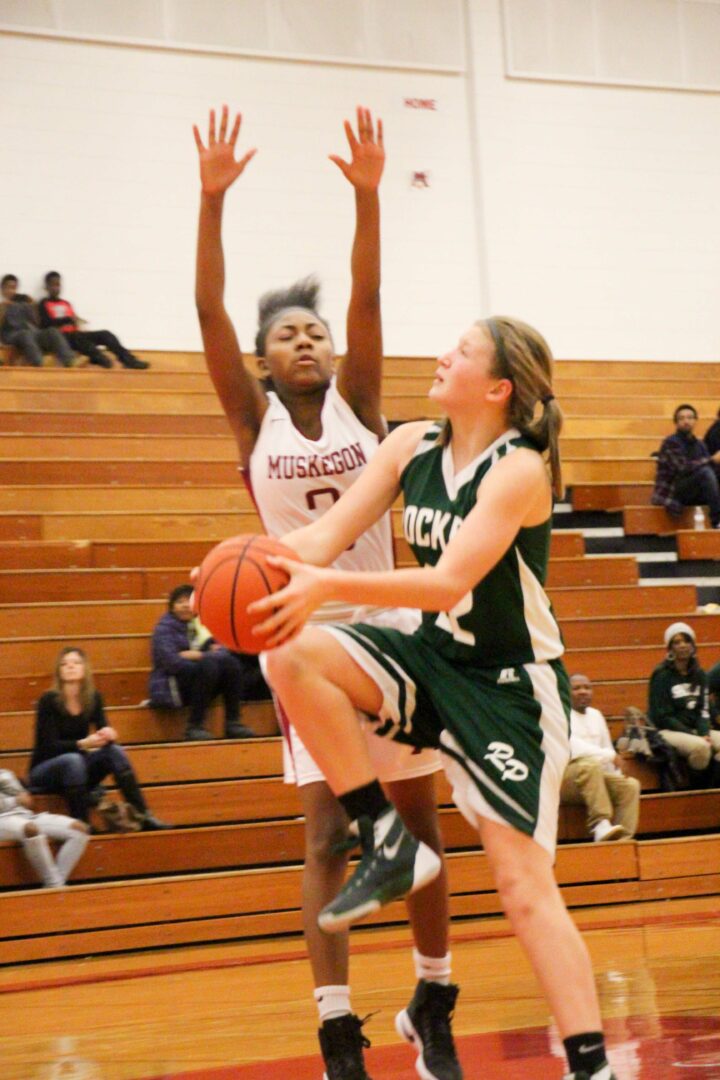 Lauren Ross looks to the hoop on the drive while Muskegon’s Daz’Sha Day gets a hand in her face. Photo/Jason Goorman 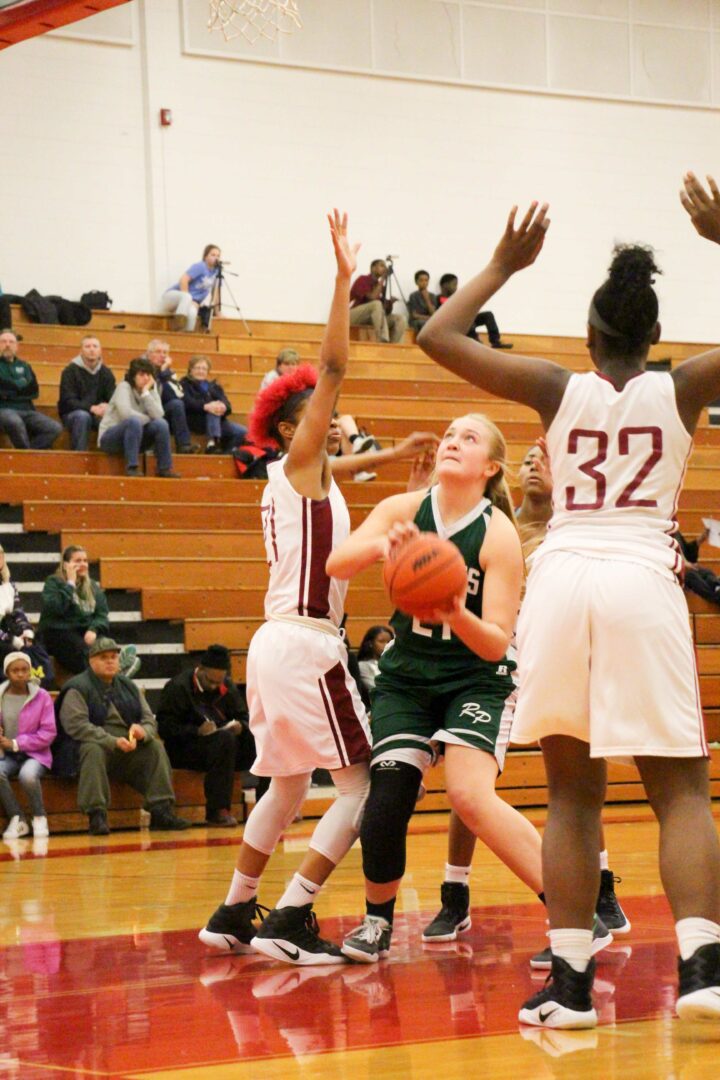 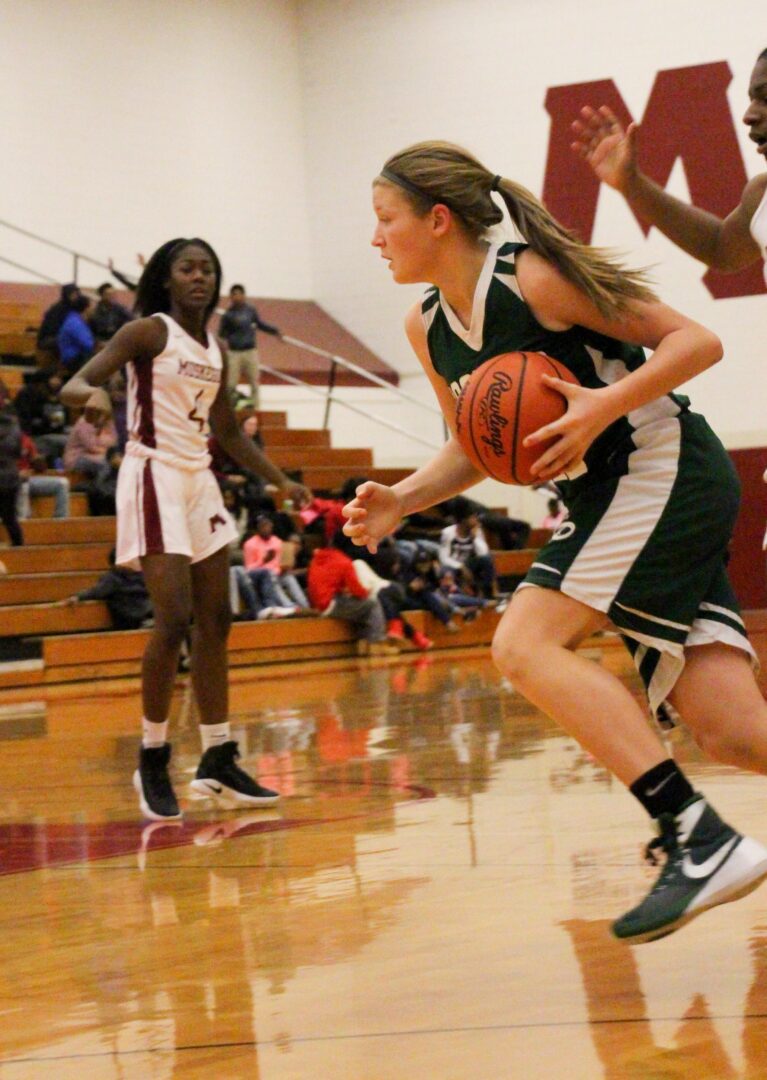 Grand Haven tripped up by Hudsonville in tough 27-24 loss