Whitehall’s Brandon Rake demonstrated that he can do it, even in the most pressure-filled situations.

The 6-6 junior, playing his first varsity game against archrival Montague, was aggressive in the paint in the fourth quarter on Saturday, despite playing with four fouls. 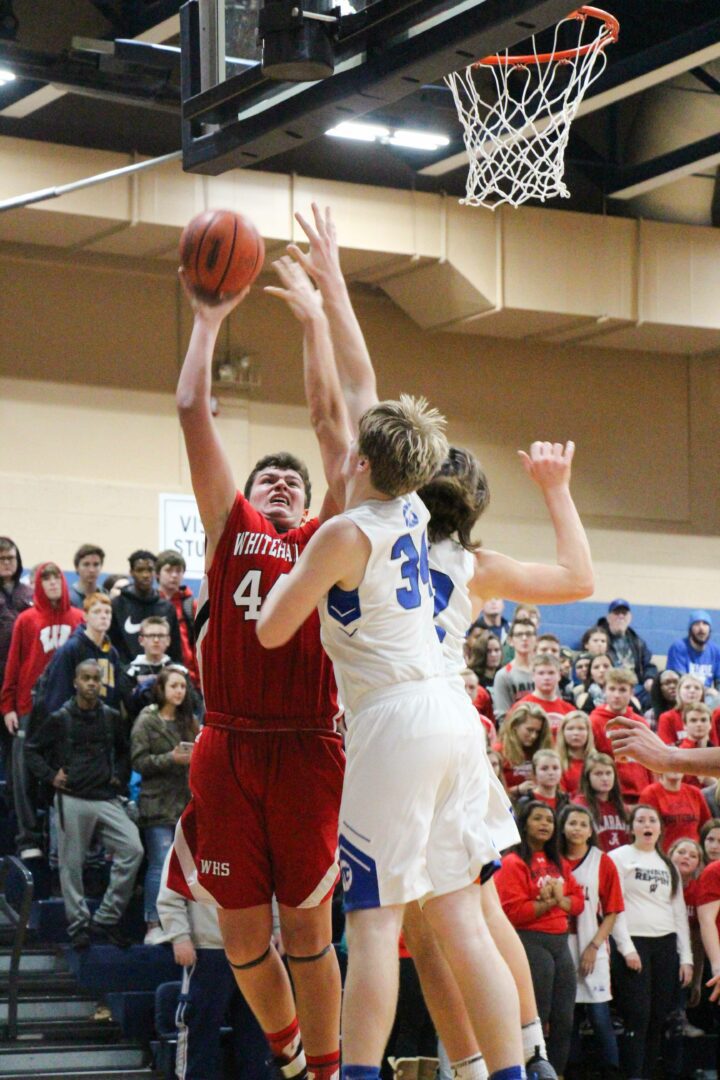 He drew foul after foul, and responded by hitting eight free throws and scoring 12 of his 17 points down the stretch, leading the Vikings to a thrilling 55-52 come-from-behind win over Montague.

“I’ve been working at it because I’ve been struggling with it lately,” Rake said about his free-throw abilities. He added that he wasn’t nervous at the line, even with the game hanging in the balance, because “I knew my team would support me no matter what.”

The victory was big for Whitehall in more than one way. The Vikings not only won temporary bragging rights in the ongoing Battle of White Lake, but grabbed first place in the West Michigan Conference in the process.

Whitehall is now 5-0 in conference play and 6-1 overall. Montague fell to 4-1 in the conference and 5-2 overall.

Getting off to a hot start in the conference is significant for the Vikings, who graduated four starters from a team that tied for the championship last season.

“It’s huge for us,” said Whitehall Coach Nate Aardema. “It’s nice to take care of things yourself, and not have to count on other teams and scoreboard-watch. But we have nine more league games to go.” 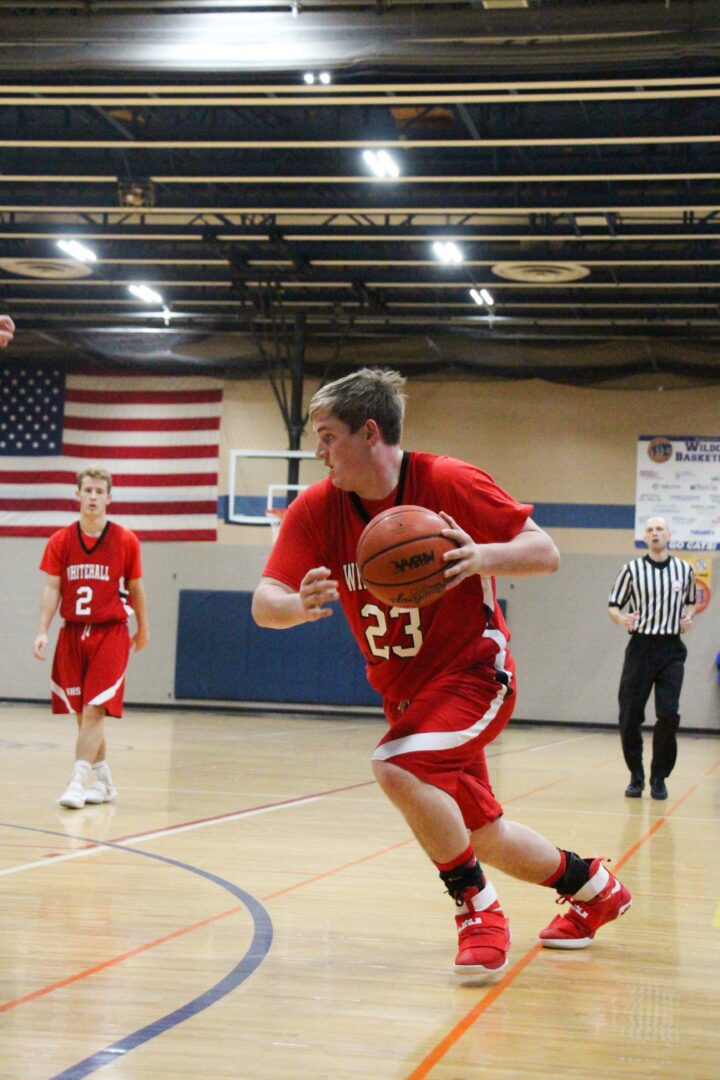 Rake’s heroics came at the perfect time for Whitehall, which trailed 15-12 after one quarter, 24-21 at halftime and 35-30 after three quarters.

To complicate matters, their leading scorer, senior guard Lucas Schumm, was having a below-average game offensively, managing only three points in the first three quarters.’

But Whitehall made up for the lost opportunities by piling up free throws in the fourth quarter. The Vikings made 14 of 21 from the line down the stretch to capture the victory.

Schumm came alive for the Vikings in the fourth quarter, scoring eight of his 11 points, including six free throws.

“With both teams competing that hard, sometimes you don’t shoot your best,” Aardema said. “But you have to find a way to be successful. We were able to ride Brandon (Rake) for a little while and he came up big for us.”

Trailing by five at the start of the fourth quarter, Whitehall opened with a 9-3 run in the first three minutes to take a 39-38 lead.

Quinton Carter sparked the Viking uprising by hitting a triple about 30 seconds in the fourth quarter, then Rake nailed a hook shot in the paint and added four free throws to put Whitehall on top. 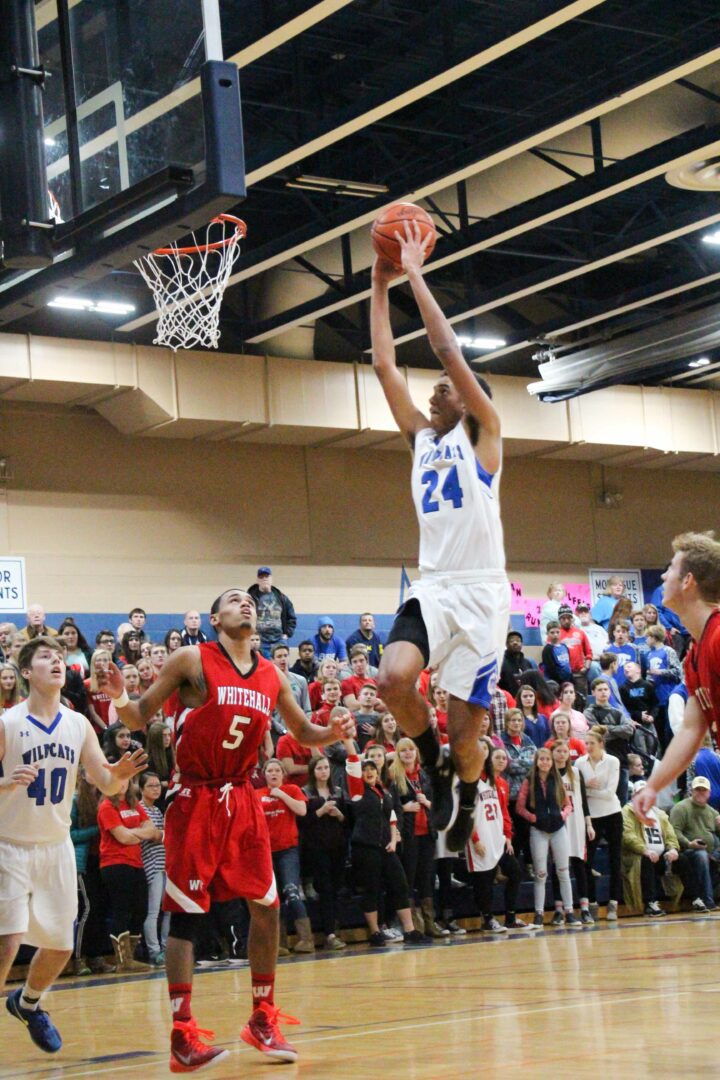 Merritt Hamann glides in for the slam dunk for Montague. Photo Jason Goorman

Justin Brown gave the Vikings the lead for good with a layup with about four minutes left, then Rake and Schumm both hit a bucket and two free throws to give the Whitehall the five-point lead.

Kenyan Johnston and Merritt Hamman each hit two free throws to pull the Wildcats within a point, 49-48, with 28 seconds remaining.

But then the Wildcats were called for their second technical foul of the fourth quarter. Rake hit two free throws after the call to give Whitehall a 51-48 edge, then Schumm added two more to put the Vikings up 53-48 with 24 seconds left.

Montague’s Remington Schneider hit a free throw, then grabbed a rebound after his missed second free throw and made a layup with six seconds left, making the score 53-52.

Schumm went to the line with five seconds left, hit two free throws, to give Whitehall its final margin of victory.

Hamann tried to tie the game with a 3-point attempt with two seconds left, but the shot missed the mark.

“It was an intense game and we lost our composure there for a few minutes,” said Montagues Coach Dave Osborne. “You don’t put yourself in situations where you can get technical. We made some bad decisions at critical times.”

Hamann finished with a game-high 19 points for Montague while Josh Weesies added 17.