MUSKEGON – Winning teams take advantage of opportunities, and the Muskegon Lumberjacks have been doing a lot of that lately.

The Jacks had three power play opportunities on Friday, and scored on all of them. That was enough to clinch a 7-4 victory over the Green Bay Gamblers in front of 1,683 happy fans at the L.C. Walker Arena. 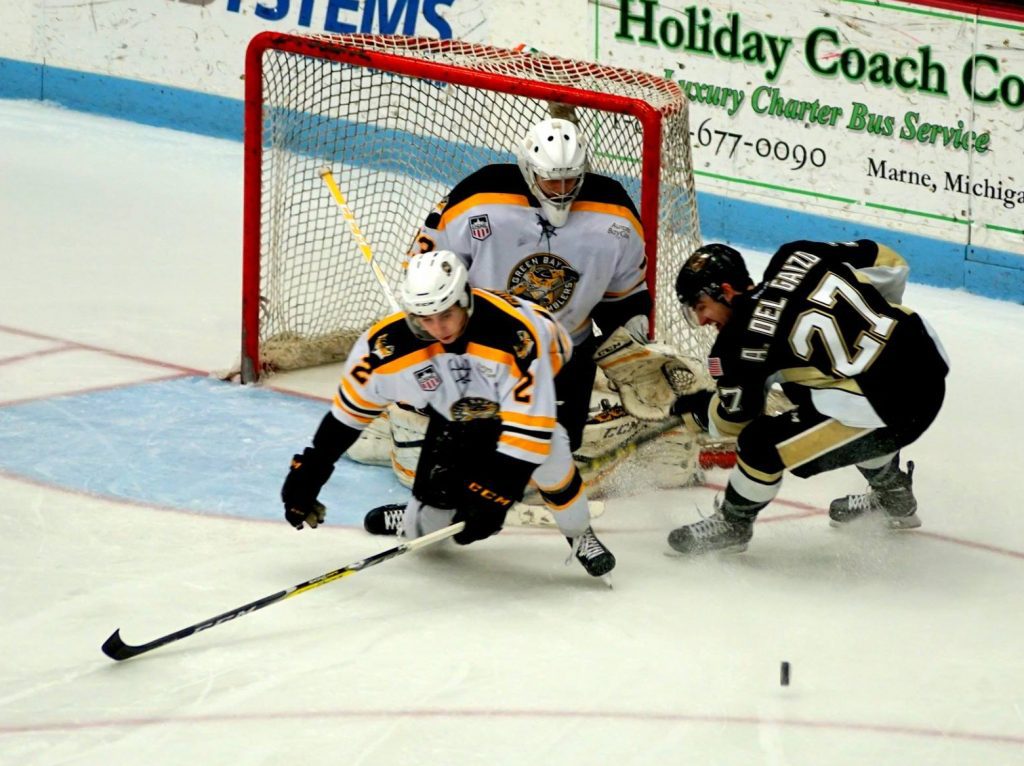 Anthony Del Gaizo looks for the puck at the net with Green Bay’s No. Jackson Charlesworth defending. Photo/Leo Valdez

The red-hot Lumberjacks have now won three straight games and six of their last seven.

They are 21-12-2 on the season, good for 44 points and third place in the USHL’s Eastern Conference standings. They are only six points behind first-place Chicago and two points behind second-place Dubuque.

Muskegon will host Green Bay in a rematch on Saturday at 7:15 p.m.

“The power play won the game for us tonight,” said Lumberjacks Coach John LaFontaine. “It was good to see that we put up a couple quick goals on the power play.”

Muskegon forward Andrei Svechnikov, who was named the first star of the game, scored two of the power play goals while Matt Steeves added one.

Steeves finished the contest with two goals while Collin Adams added a goal and two assists. Adams now has 99 USHL career points through 95 games, over a season and a half.

Bo Hanson chipped in with three assists for the Lumberjacks while Garrett Van Wyhe and Casey Gilling each had a goal and an assist.

“Steeves had a couple nice plays around the net, while Svechnikov has one of the best shots and releases I have ever seen,” LaFontaine said. “As for Collin (Adams), we don’t just focus on his points, he plays a full game.”

The victory gave the Lumberjacks some cushion in the race for the playoffs in the Eastern Conference. The top four teams qualify for the postseason. Chicago, Dubuque, Muskegon and Youngstown currently hold those spots. 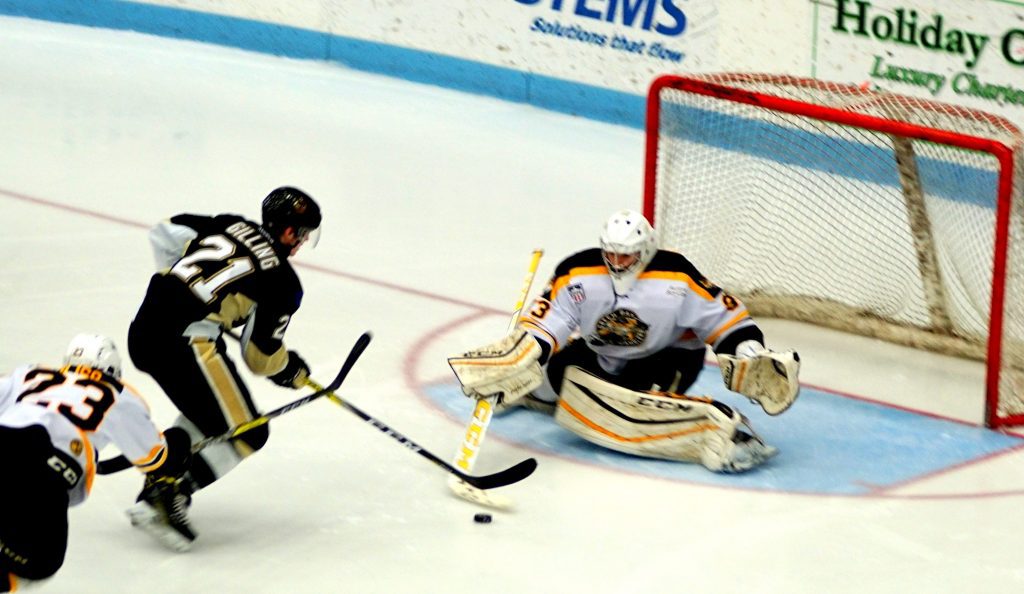 Green Bay, the fifth-place team, is now seven points behind the Jacks.

“They (Green Bay) are going to be really desperate tomorrow night,” said LaFontaine. “It’s going to be a tough game.”

The Lumberjacks opened the scoring at the 4:39 mark of the first period on a power play goal from Svechnikov. They increased their lead to 2-0 on a power play tally from Steeves at the 19:10 mark.

The Gamblers responded with a power goal of their own from Brody Stevens 15:33 into the first period.

The Lumberjacks only led 2-1 after the first period, despite outshooting Green Bay 21-8.

Muskegon opened the second period with a quick goal by Adams at the 39 second mark to take a 3-1 lead. .

Green Bay cut its deficit to 3-2 just 36 seconds later with a goal from Josh Dunne. The Lumberjacks regained their two-goal advantage on Steeves’ second goal, 6:34 into the second period.

The Gamblers rallied to tie the game 4-4 on second-period goals from former Lumberjack Dante Palecco (12:31) and Josh Kosack (14:04).

Svechnikov scored his second goal of the night at 15:33 of the second period to put Muskegon up for good at 5-4.

The Lumberjacks increased their advantage to 6-4 with a goal from Gilling at the 3:19 mark of the third period. They added an empty net goal by Van Whye with 11 seconds left.

The Gamblers outshot Muskegon by a 35-34 margin. Adam Brizgala picked up the win in net for the Lumberjacks, stopping 31 shots.