MUSKEGON – Usually a tie is nothing to celebrate.

But for the Muskegon Risers, an opening night deadlock was kind of special,

particularly since they earned it with an impressive comeback.

The Risers began a new era on Friday by playing their

inaugural game as members of the Premier Arena Soccer League.

The home team fell behind 3-0 in the first half, which surprised nobody, since most of the Risers have little experience playing indoor soccer at the PASL level.

But the Risers roared back to gain a 4-4 tie against Waza Flo Premier in front of a crowd estimated at 1,500 at L.C. Walker Arena.

One of the stars for the Risers was a local guy – Muskegon High School and Muskegon Community College grad Miguel Flores – who scored the first goal in the team’s indoor history, then scored again in the second half to lead the comeback. 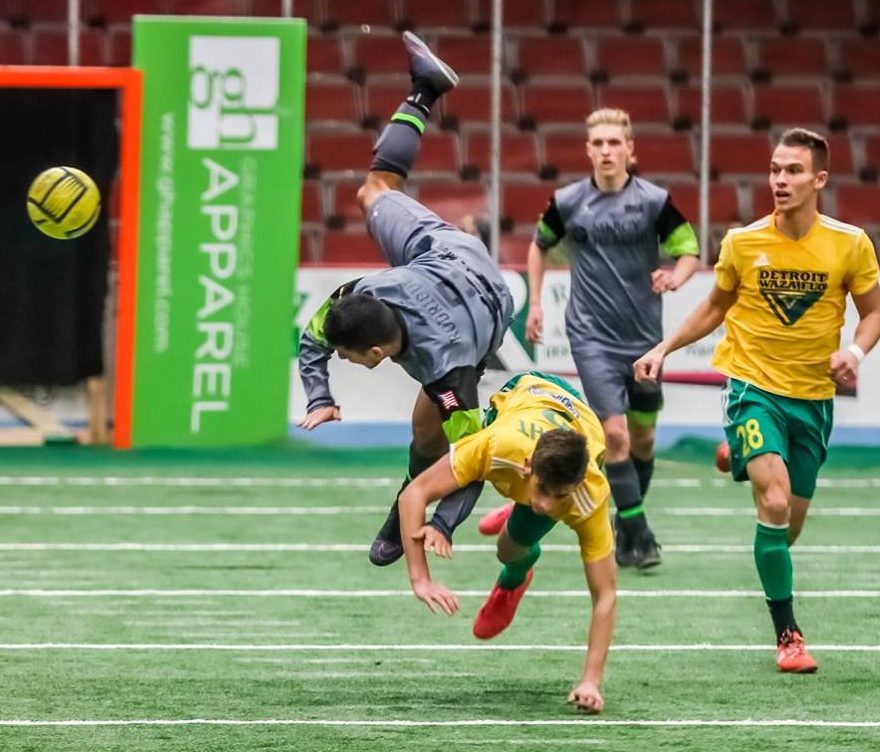 “Playing in my home town means a lot to me,” Flores said. “To be able to score and hear the fans cheer means the world to me.

“That’s what I focus on, performing at my best in front of my home town. I’m just really happy to be a part of it, I really am.”

The game didn’t start according to plan, as nerves and excitement seemed to get the best of the Risers.

Waza opened the scoring just two minutes into the game on a penalty kick from Nick Capisciolto.

Waza scored again less than three minutes later when Jimmy Mortada’s shot went wide of the net and Zak McCabe kicked the rebound in off the end board to make it 2-0.

Neither team was able to capitalize for the remainder of the first quarter, despite chances on both ends.

Waza extended its lead to 3-0 just 1:15 into the second quarter when Muskegon turned the ball over near the center line and Riser goalkeeper Tim Bergsma was caught out of position. 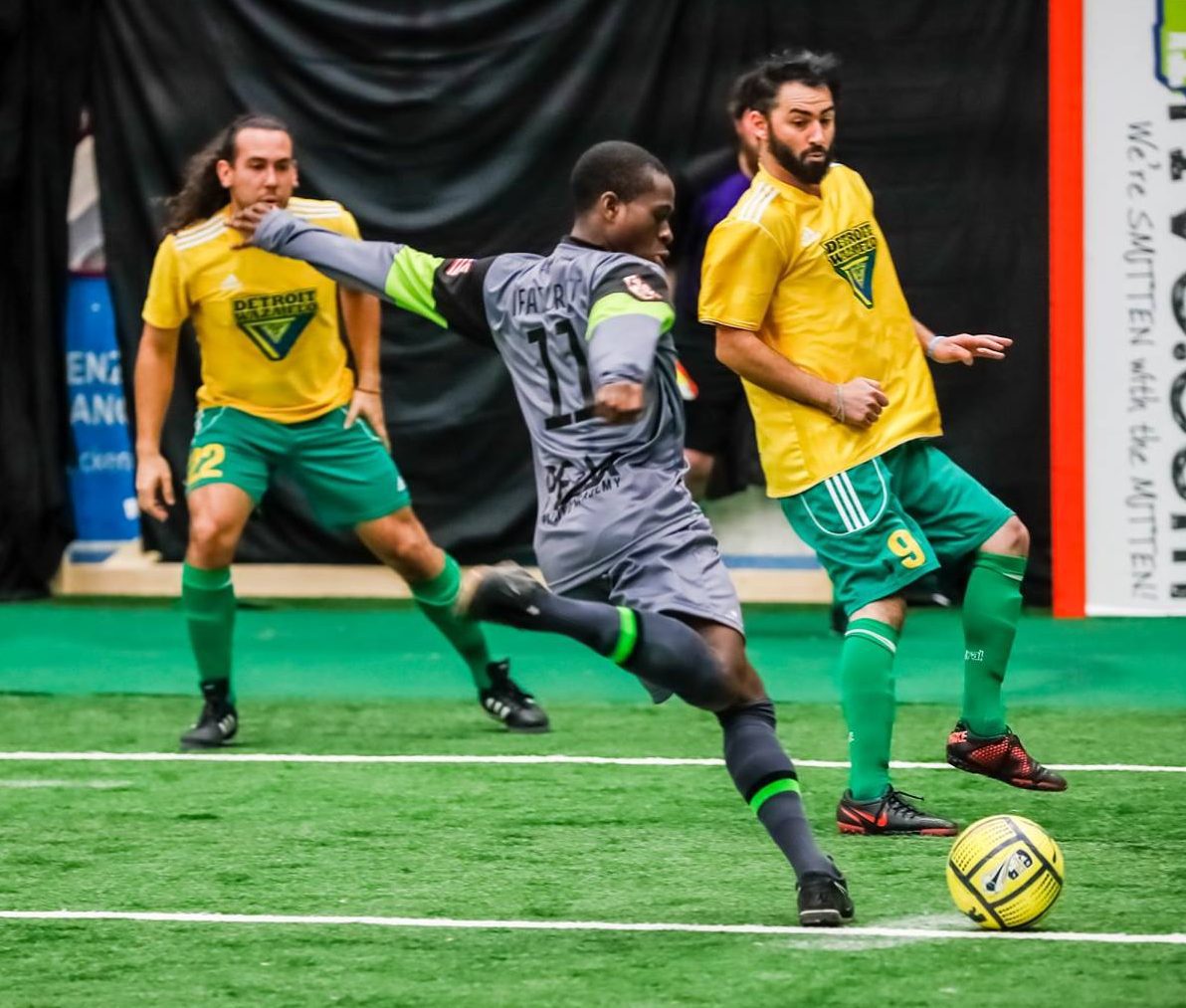 TJ Ifaturoti gets ready to take the shot for the Risers. Photo/Tim Reilly

Waza’s Matt VanZytveld earned the goal on a long shot.

Flores broke through for the Risers with 3:23 remaining in the first half when he scored with a blast from the left wing from 14 yards out.

Muskegon came out of the locker room for the second half with a new focus and intensity.

“At halftime, coach really told us we need to buckle down, we just need to take our time, move the ball around and set some piece plays. I thought we did that very well,” Flores said.

“I think we settled down at halftime and worked the ball a little bit better,” said Risers Coach Ben Ritsema. “We gave up two miscommunication goals. I felt like we gave them two (first half) goals.”

Flores narrowed the Risers’ deficit to 3-2 at the 6:37 mark of the third quarter with another hard shot that found the goal.

Former Hope College standout Rich Visser, who pressured the Waza defense throughout the game, forced a critical turnover for the Risers midway through the third quarter. 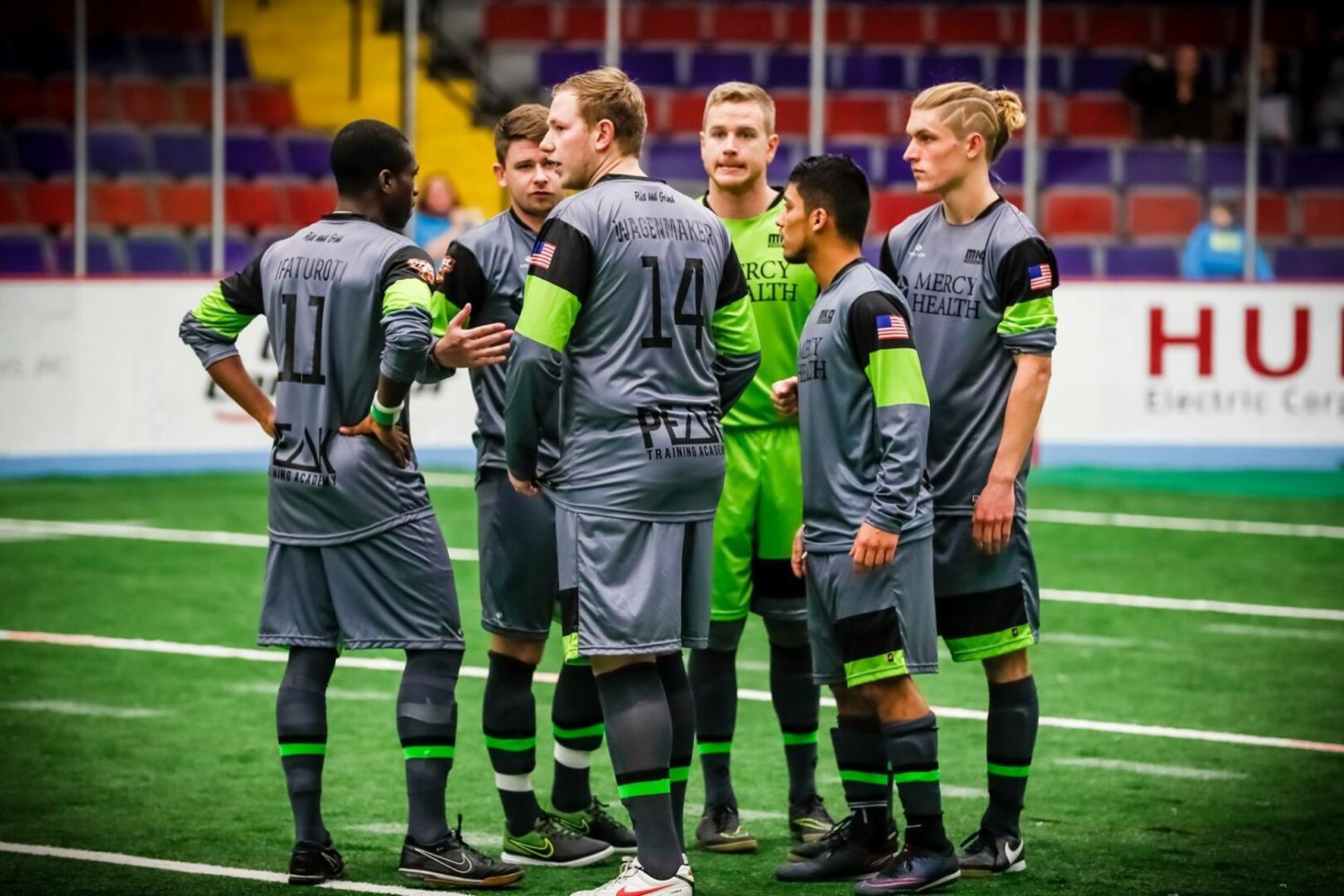 The Muskegon Risers consult after a Waza goal. Photo/Tim Reilly

Muskegon’s TJ Ifaturoti took advantage of the turnover and launched a shot past Waza goalkeeper Alex Howe to tie the game at 3-3.

Waza regained the lead less than three minutes into the fourth quarter on a goal from Joe Brookhuizen, but Muskegon’s Michael Schmitt tied it back up at 4-4 just three minutes later.

The tie gave the Risers one point in the league standings.

“It’s frustrating (ending in a tie) but we’re still happy we got a point,” Ritsema said.

The Risers will return to action with another home game on Saturday night against the Youngstown Nighthawks. Game time is 7 p.m. at L.C. Walker Arena.

“Now we’re going to have to rest our legs and come right back to it tomorrow,” Ritsema said. “It’s tough on them for sure.

“We’ll get our postgame meal and take a couple ice baths and get back on the field tomorrow.”

Lumberjacks hold on for a 4-3 victory in Dubuque, win Eastern Conference, qualify for their first Clark Cup finals