MUSKEGON – Will Smith was not going to miss again.

The Muskegon Lumberjacks forward had a chance to end Saturday’s nail-biting game against the Green Bay Gamblers near the end of overtime.

He broke in alone on Gamblers goalie David Hrenek with two seconds left in the extra period, but Hrenak came up with the save, leaving the game scoreless.

That led to an overtime shootout, with skaters from each team going one-on-one with the opposing goalies. Ten Green Bay players shot and were denied by Lumberjacks goalie Keith Petruzzelli. Nine Lumberjacks took their turn, but couldn’t beat Hrenak.

Then it was Smith’s turn in the shootout, and he wasn’t about to blow another chance to end the marathon contest.

He calmly skated in on Hrenek and buried the puck, giving the Jacks a dramatic 1-0 victory over the Gamblers in front of 2,780 excited fans at L.C. Walker Arena.

The victory was the fourth in a row for the hot Lumberjacks – including a weekend sweep of Green Bay – and their seventh win in eight games.

“I looked at the clock just before I got the puck and I saw the seconds were winding down,” Smith said about his close call in the final seconds of regulation. “I took the puck to my backhand, and the goalie made an amazing save to deny me. It was a great play by the goalie.” 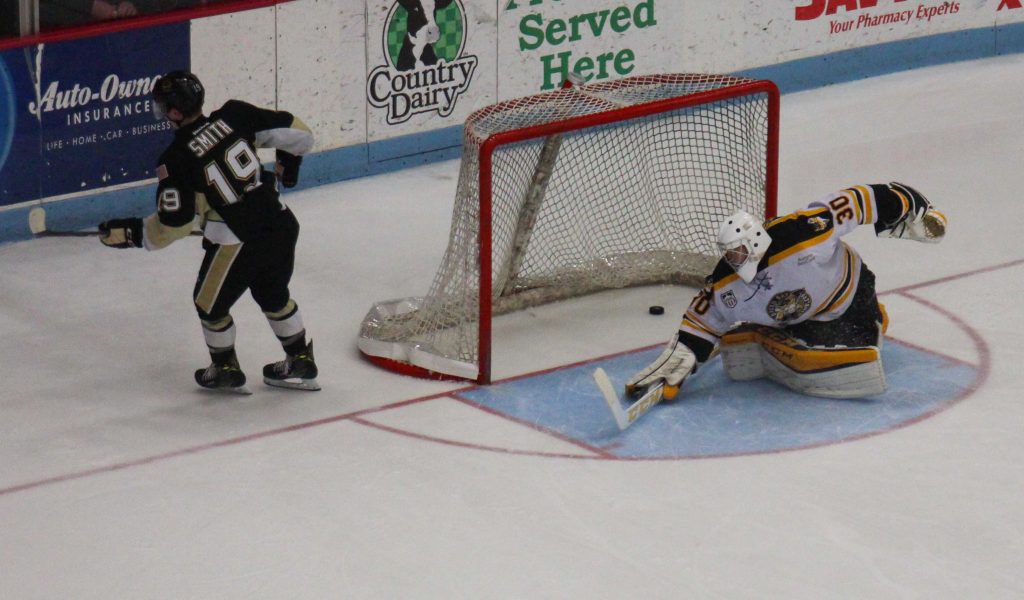 Smith was standing on the Jacks bench during the shootout, and finally signaled to Coach John LaFontaine that he wanted another chance.

“I just looked at coach and asked him if I can get a little redemption, and luckily I did,” Smith said. “It was awesome. It’s been awhile since I scored a goal, and to get a goal to win the game against a great team battling for playoff position is an incredible feeling.”

LaFontaine said he was starting to wonder if anyone was going to score and end the contest.

“I was getting a little worried,” the coach said about the long shootout. “I thought we were going to win it with this guy, and then with this guy, but their goalie was really good, and thank God ours was one better. He had one hell of a game.

“It is great to see our goalies playing their best hockey.”

The game was a goaltender dual from the beginning, with Muskegon’s Petruzzelli and Green Bay’s Hrenak bholding the opposing team scoreless for all three regulation periods and the seven-minute overtime period.

They were also amazing in the shootout, with Petruzzelli calmly turning away 10 Green Bay attempts, and Hrenek stopping nine Lumberjacks. 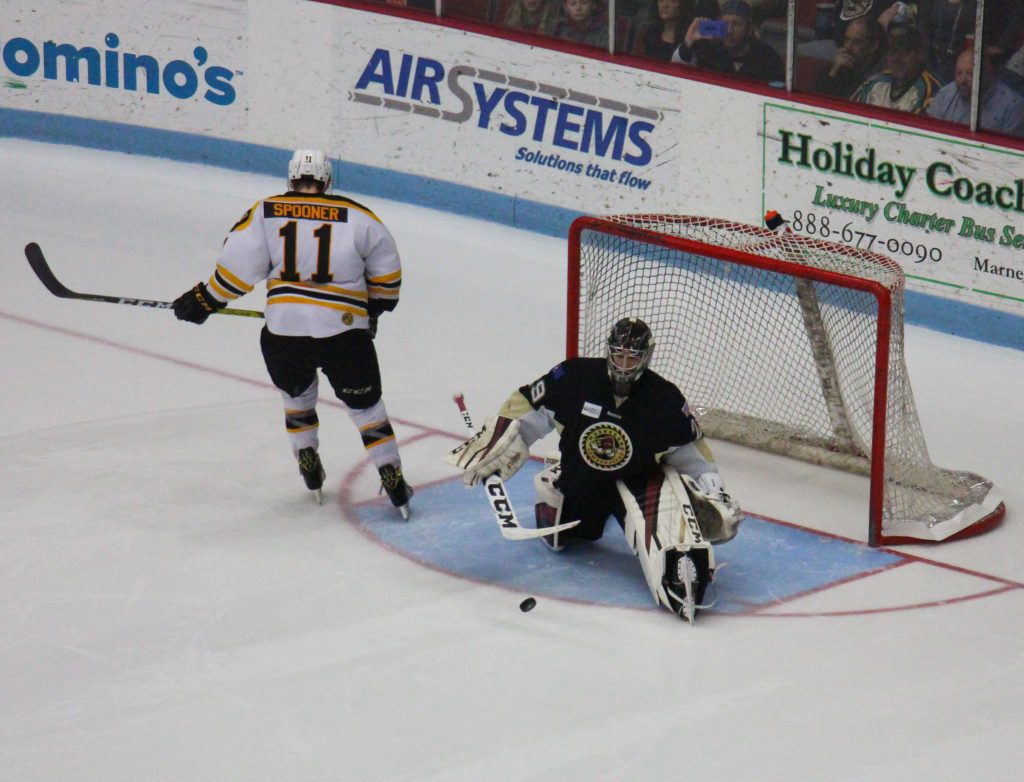 The arena roared when Smith finally scored and ended the game, giving Petruzzelli a well-earned victory in goal.

Both teams had their chances to score in regulation, particularly on power plays.

Muskegon failed to score on six power play opportunities, while the Gamblers were 0-for-5.

The Lumberjacks outshot the Gamblers 32-20 in the contest, including 13-6 in the third period and 4-1 in overtime, but couldn’t find the back of the goal.

But the lack of scoring didn’t matter when Smith buried finally settled the issue in the shootout, extending the Jacks’ longest-winning streak since the second week of the season.

“These guys are competing every night and are playing as a team,” said LaFontaine. “It’s tough to sweep a team and we knew it was going to be a tough game.”

The Jacks are now 22-12-12, good for 46 points and third place in the quickly tightening USHL Eastern Conference standings. They are only four points behind first-place Chicago and two points behind second-place Dubuque.

They will host Dubuque next Friday and Saturday.