MUSKEGON – The Muskegon Lumberjacks have definitely not been boring their fans lately.

Their three previous homes games before Friday went to overtime shootouts, two of which ended up in exciting victories.

Friday’s game didn’t go to overtime, but it still ranked high in terms of excitement.

The Jacks took an early lead, fell behind by one goal, then rallied to claim a hard-fought 5-3 victory over the Des Moines Buccaneers in front of 2,219 fans at L.C. Walker Arena.

The win kept the Lumberjacks’ hot streak alive and growing. They are 7-1-1 in their last nine games and have gained 15 out of a possible 18 points in the league standings.

The Jacks are 25-13-3 on the season and remain in fourth place in the USHL’s Eastern Conference, but are hot on the heels of the top three teams. 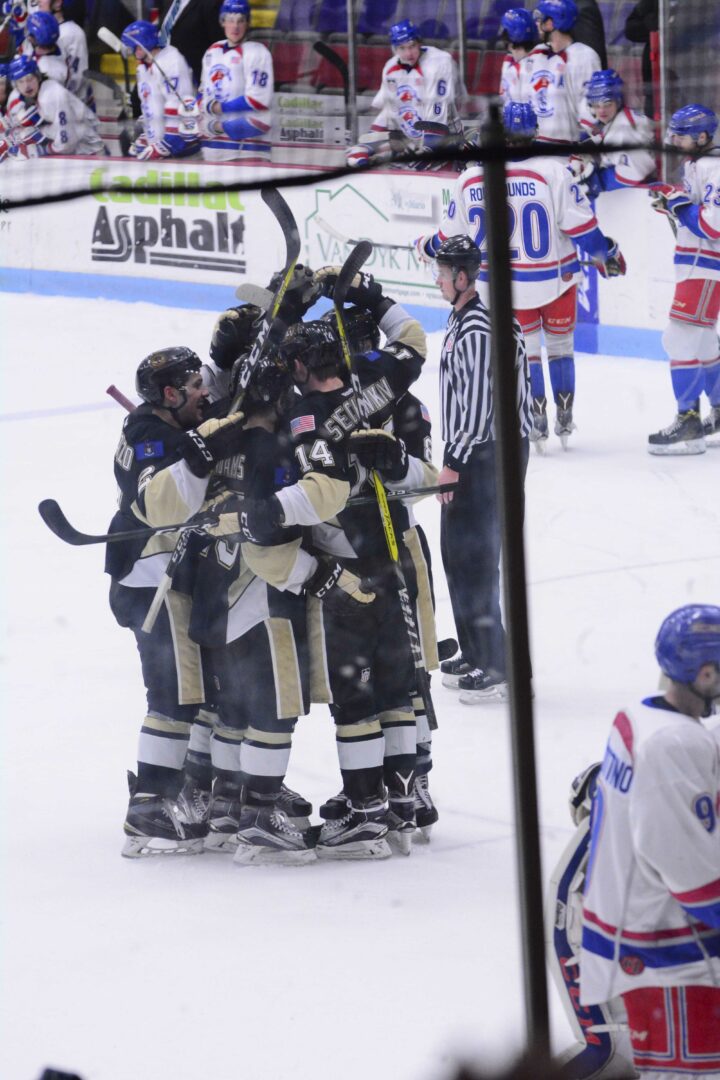 The win improved the Lumberjacks’ home record to a shiny 13-4-2. The Jacks often find themselves in lively, competitive games on their home ice, but they usually find a way to win.

“We find a way to keep them exciting, that’s for sure,” said Lumberjacks Coach John LaFontaine. “The fans are amazing and our guys love playing for them. We’ve gotten to know this rink and we have to protect home ice.”

The victory was the type that LaFontaine likes, with a lot of different players contributing to the scoring.

That was a problem in the first half of the season, when leading scorers Collin Adams, Andrei Svechnikov and Bo Hanson accounted for a disproportionate number of points, and the Jacks sometimes struggled.

That hasn’t been the case since the start of the new year, and it certainly wasn’t the case on Friday.

Casey Gilling led the way with two goals, Mikael Hakkarainen added one and Keeghan Howdeshell chipped in with two beautiful passes that turned into goals. 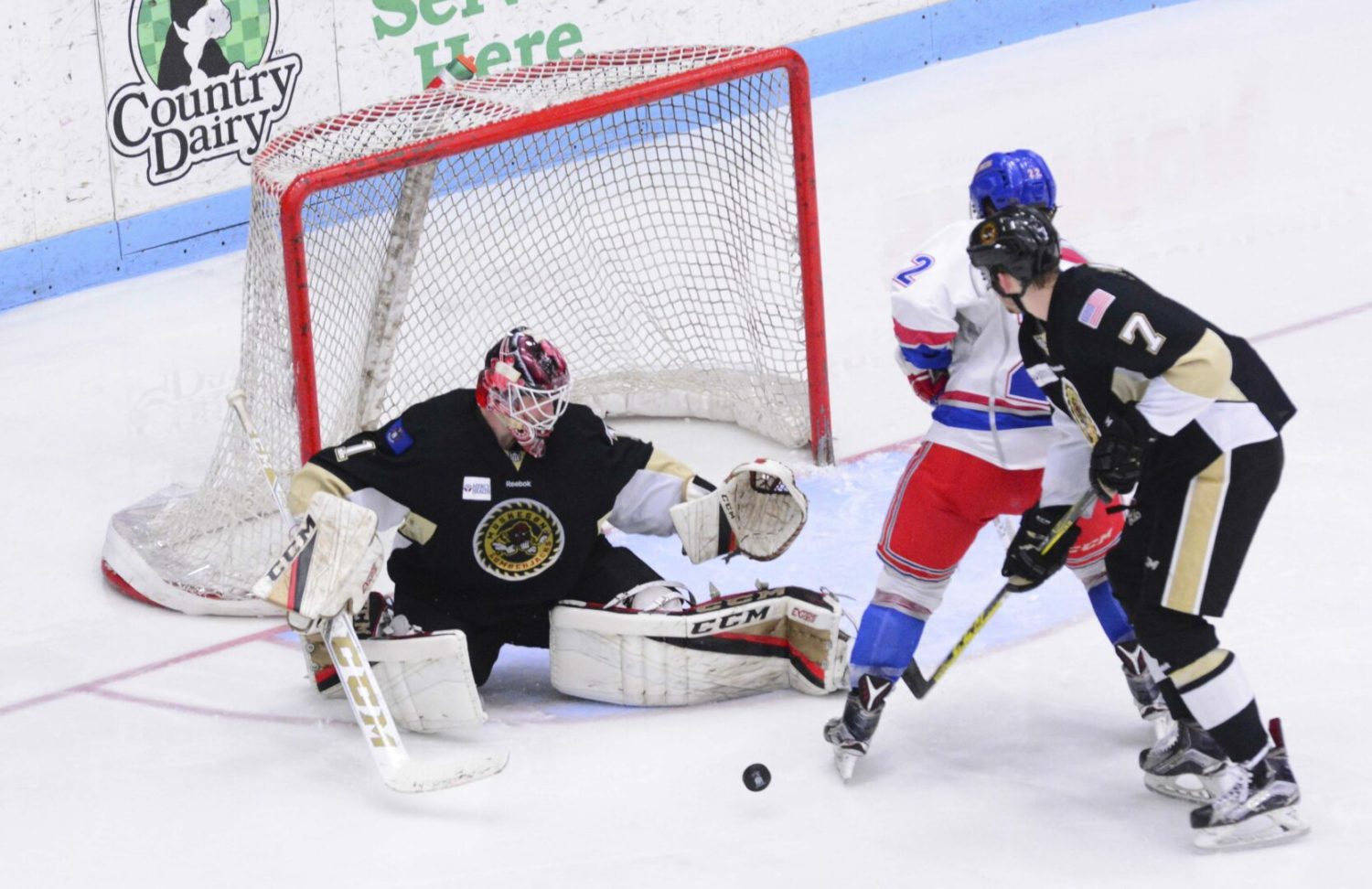 Muskegon goalie Adam Brizgala gets ready to make a save. Photo/Marc Hoeksema

The big scorers were not shut out of the picture. Adams and Svechnikov each scored their 20th goal of the season to top off the Muskegon attack.

“We have been getting that since Christmas,” LaFontaine said about the team’s secondary scoring. “There are a lot of guys on this team that have been playing hard. It’s great to see them get rewarded.”

The Lumberjacks opened the scoring at the 5:53 mark of the first period on a goal from Gilling.

Des Moines’ Cameron Orchard tied the game 1-1 at the 16:35 mark of the first period, then Chris Berger gave the Buccaneers a 2-1 lead with a goal just 10 seconds later.

The Jacks came back in the second period with a two-goal burst of their own to grab a 3-2 lead.

The first came from Adams at the 22 second mark of the period, and the other came when Gilling scored his second goal at the 3:41 mark.

The Jacks increased their lead to 4-2 with a goal from Hakkarainen at the 9:27 mark of the third period.

Reed Lebster scored for Des Moines midway through the third to make it a one-goal game, but Svechnikov put the victory on ice for Muskegon with a goal at the 17:59 mark.

Each team had 27 shots on goal. Muskegon goalie Adam Brizgala posted the victory and improved his record to 12-5-3 on the season. 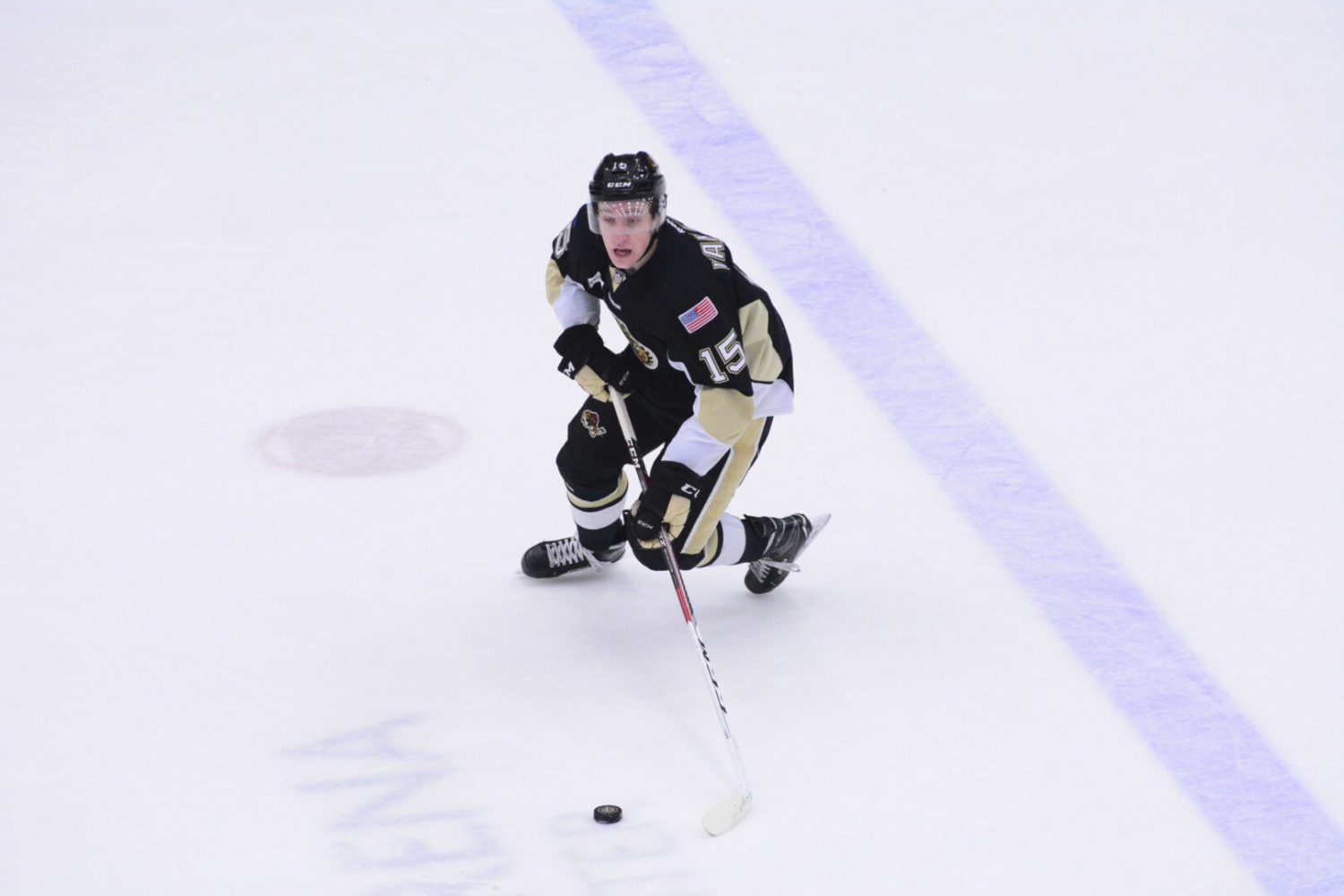 Garrett Van Wyhe controls the puck across the blue line for the Lumberjacks. Photo/Marc Hoeksema 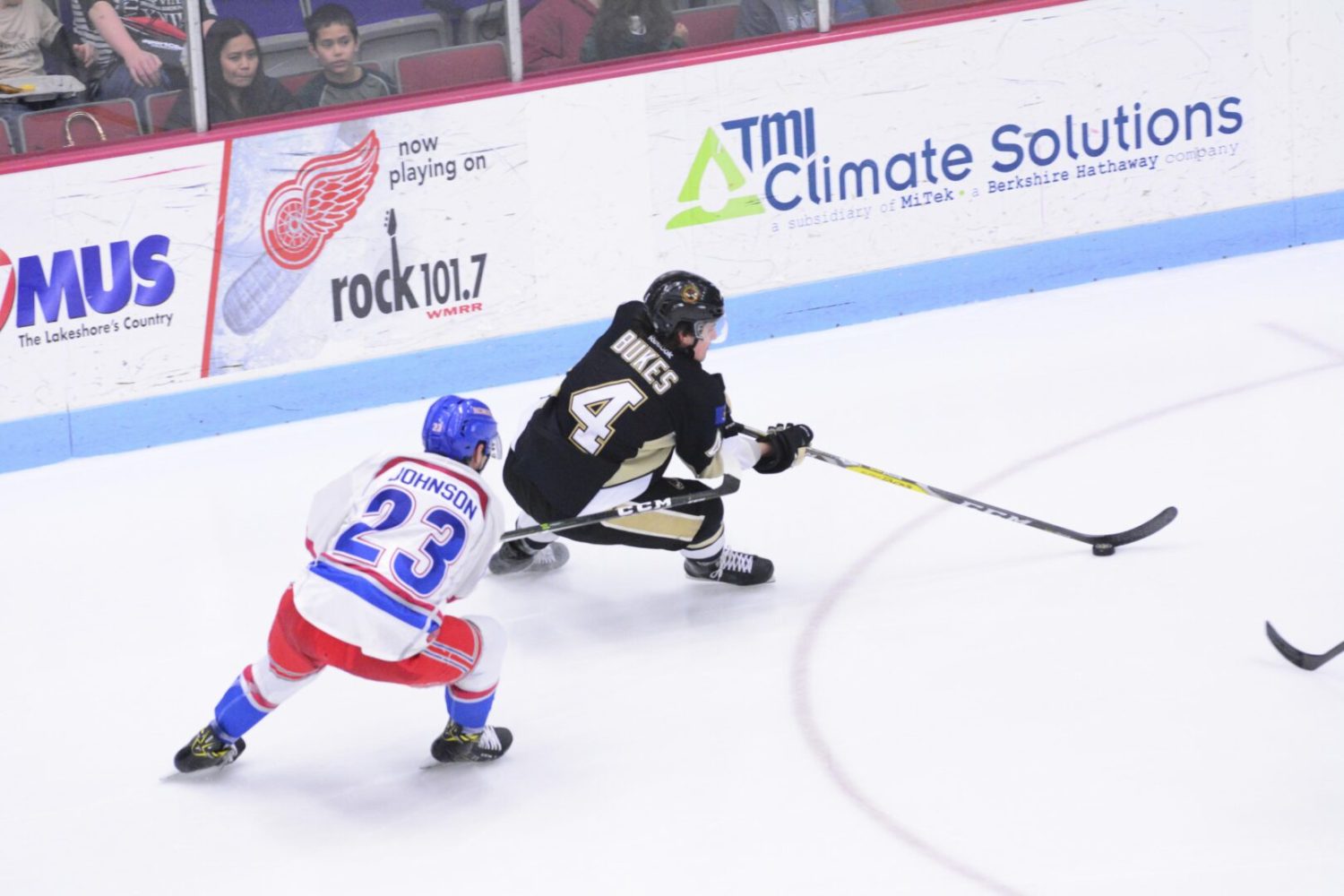 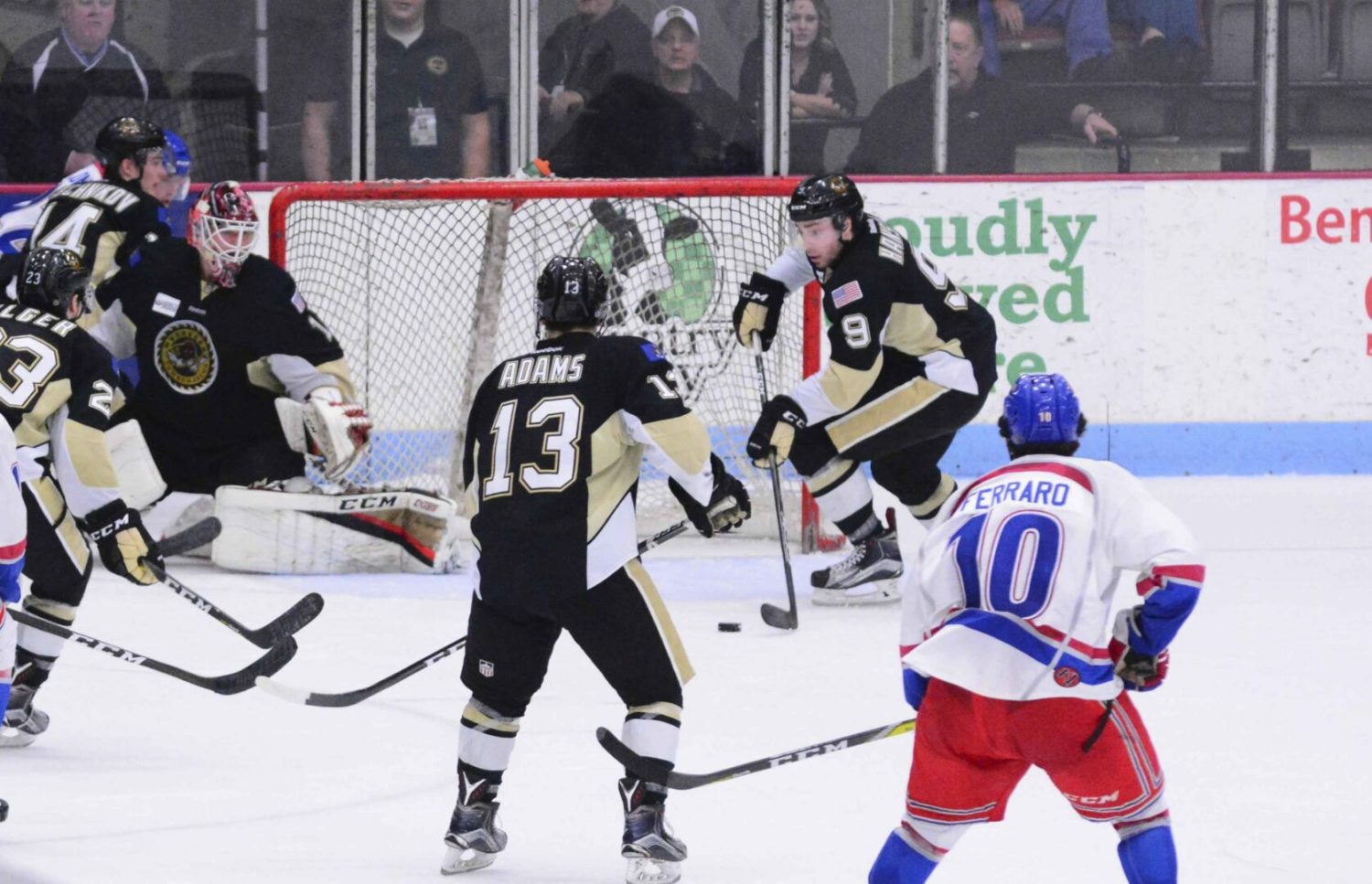 No. 9 Bo Hanson controls the puck in front of the Muskegon net. Photo/Marc Hoeksema 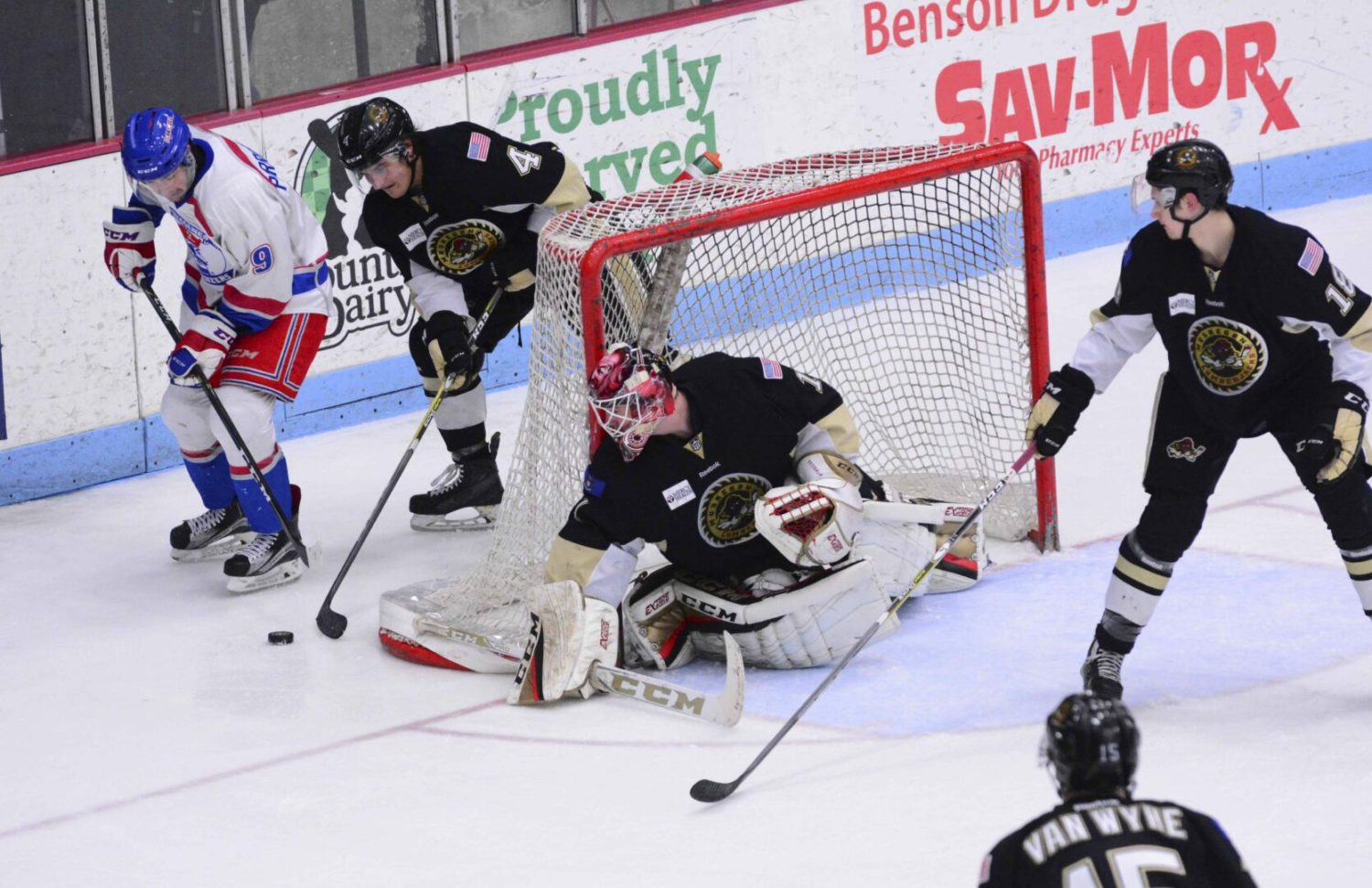 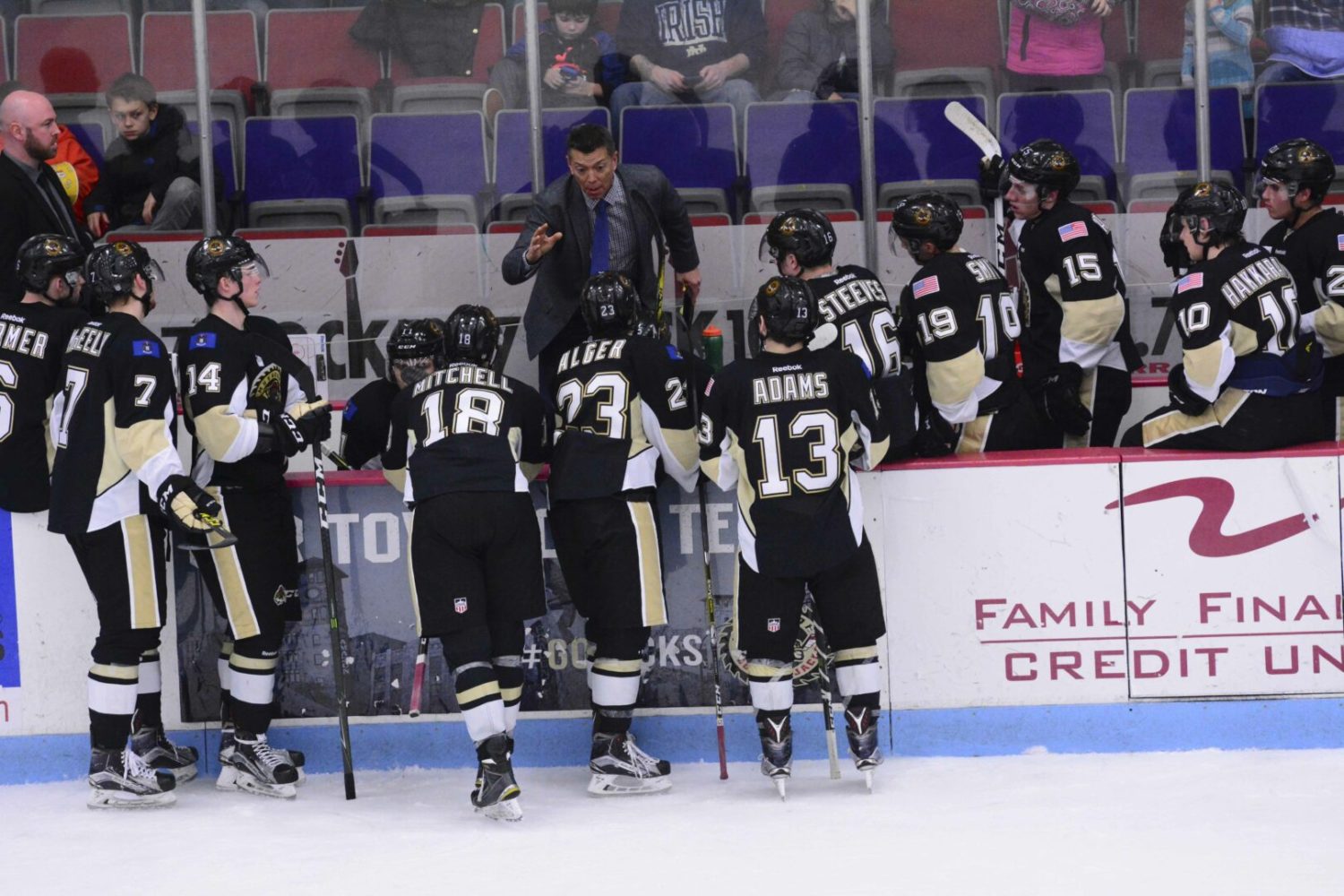 Muskegon Coach John Lafontaine talks to his team during a time out last season. Photo/Marc Hoeksema