This season he has two, and it’s making a big difference for the Lakers. 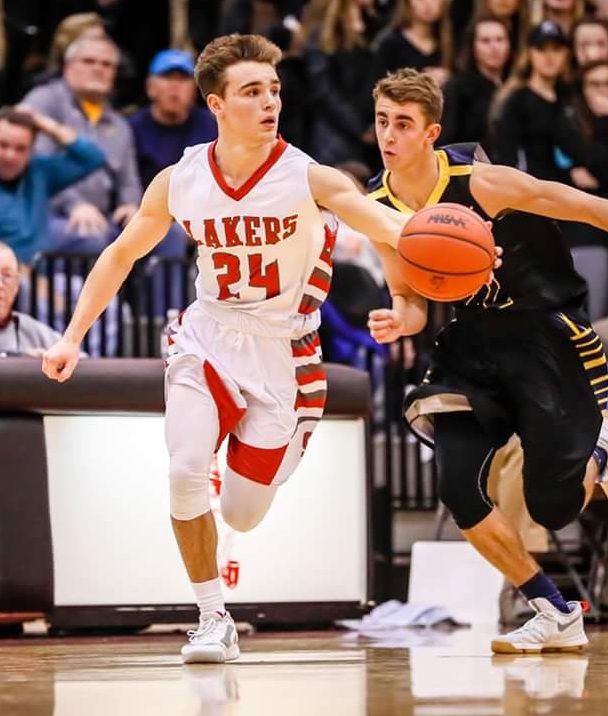 Ball drives up the court against Grand Haven. Photo/Tim Reilly

Cameron Ball and Isaiah Pierce have played key roles in Spring Lake’s smooth transition from the Lakes 8 Conference to the tough O-K Blue Conference this season.

The Lakers are 12-5 overall and have high hopes of making a strong run in the upcoming state tournament, like they did two years ago when they surprised everyone by advancing to the Class B state quarterfinals.

Ball and Pierce’s experience and savvy could be pivotal in repeating that sort of run, according to Core.

Core said opposing teams rarely press against the Lakers, because of the guards’ speed and ball-handling abilities. The coach said Ball and Pierce are the team’s key players on both ends of the court.

The two guards can both play the point with skill and make things happen with their passing and playmaking.

But Pierce has stepped into the point guard role more this season, while Ball has become more of a shooting guard. Core said the switch was made around the middle of last season, to take advantage of Ball’s scoring skills.

“That has helped Cameron get out to run for more fast-break layups,” Core said “He’s also more of an outside threat, so with Isaiah pushing, we have been able to find (Ball) for open looks.” 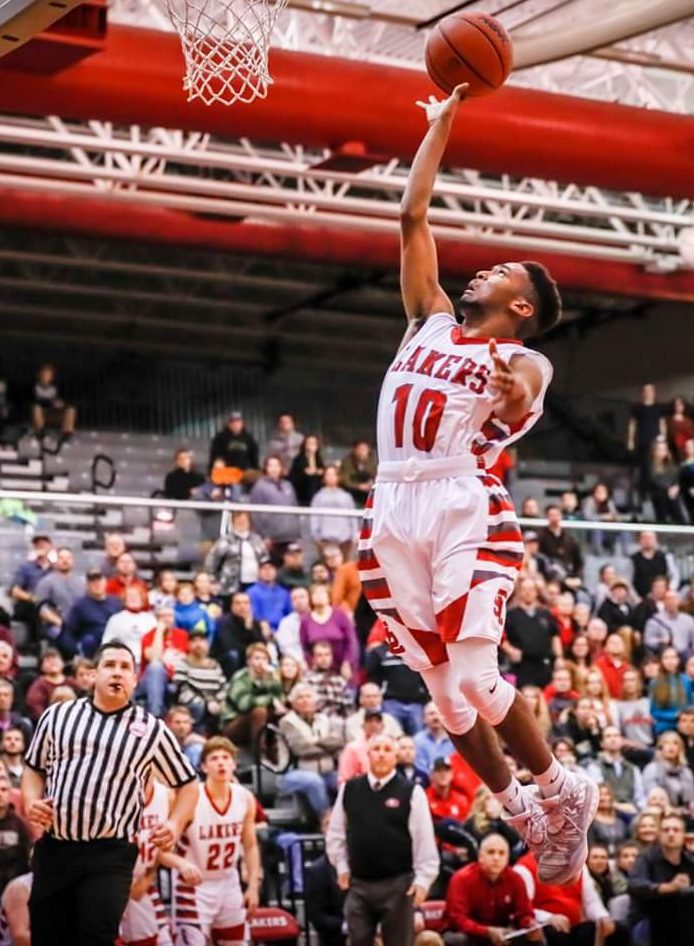 Pierce moves in for a layup for Spring Lake. Photo/Tim Reilly

Ball, who has been on the varsity squad since his sophomore season, has developed a more diverse offensive game this season. He said he’s more confident driving to the rim, and has a lot of confidence in his outside shot, as well.

Ball leads the balanced Spring Lake  attack by averaging 10.2 points per game, to go along with 3.5 assists and 2.4 steals.

He said he never really chose to be an athlete when he was small. That decision was made by his mother, who pushed him to participate in all sorts of activities.

“She always wanted us to stay active, so I played everything – soccer, baseball, track, even hockey and gymnastics,” Ball said. “My younger brothers (freshman Caden and sixth-grader Carter) both play a lot of sports, too. They both love basketball.”

Ball’s college plans are focused on football. He’s narrowed down his choices to Hope College or Kalamazoo College. Although he was the Lakers’ starting quarterback this past fall, coaches envision him as a defensive back or slot receiver at the next level, he said.

With Ball focusing more on offense this year, Pierce plays the crucial but less noticed role of setting up plays. He doesn’t get credit for a lot of assists because he often makes the pass that starts the play, before another Laker passes to the scorer.

“He’s still there setting up the shots for us,” Core said.

Pierce has also become the Lakers’ “gambling nuisance” by taking chances when going for steals, according to Core. He averages about two steals per game.

“(Pierce) is probably one of the most athletic players I’ve ever been around,” Ball said. “He can go from walking to running like a gazelle in a second. The way he (defends) against other guards, it helps make me a better player because we feed off each other.”

“I’ve decided I like basketball the best,” said Pierce, who is considering Grand Rapids Community College. “Coaches have told me that if that’s what I’m considering, now is the time to go for it. So I’ve been lifting and trying to get stronger and working on my shot a lot.”

Both players say it’s been an adjustment battling in the O-K Blue, which Core says has depth top-to-bottom like the Big 10 Conference.

For example, league-leading Grand Rapids Catholic Central beat the Lakers twice by a combined eight points, nipped Coopersville by two points in overtime, and edged Allendale by a point.

“Every game of ours, it seems, has gone down to single digits,” said Core, whose team won the Lakes 8 title last year, but is 6-3 in the O-K Blue.

“It’s way better competition (compared to the Lakes 8),” Pierce added. “It’s been pretty physical and the refs don’t call a lot. We’ve just realized that we have to get stronger, and as far as the physical play, we have to expect it.”

Core said the tough league competition has also helped him feel more confident about his team’s chances in the upcoming Class B districts, which Spring Lake will host.

“We feel going through this schedule has definitely set us up for the postseason,” Core said. “We’re definitely battle tested.”

Vanderputte runs wild in second half, leading Oakridge to come-from-behind 34-13 win over Ravenna