MUSKEGON – Not so long ago, the Muskegon Lumberjacks’ main concern was securing a playoff spot in the USHL’s Eastern Conference.

But after piling up a lot of wins over the past seven weeks, they can think about bigger goals. 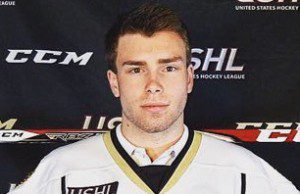 The Jacks are currently 27-14-3 with 58 points in the conference standings. They are tied for second place with Youngstown, and only four points – two victories – behind first-place Chicago.

Meanwhile, they are only five points behind Western Conference leader Sioux City in the race for the Anderson Cup, which goes to the team with the most points in the regular season standings.

Muskegon’s playoff spot seems relatively secure, at least for the moment. The top four teams in the conference make the postseason, and the Lumberjacks are eight points (four wins) ahead of fifth-place Green Bay.

The Lumberjacks, who have won 11 of their past 17 games, will continue their push toward the top of the standings with a pair of home games on Friday and Saturday against Madison. Both games start at 7:15 p.m.

“It’s really unbelievable how we’ve come together as one unit,” said Lumberjacks Captain Bo Hanson. “A lot of guys are really buying in right now, and there’s a lot of support for each other in the locker room.

“We’re not looking to win the Anderson Cup, per se. Our goal every weekend is to win each game and play a little better than when did the last game.”

If the regular season ended today, Muskegon, Chicago, Dubuque and Youngstown would be in the Eastern Conference playoffs. All four teams are very close in skill level, and Hanson says it wouldn’t make much difference who the Jacks might play in the first round.

But he thinks playoff-style pressure will be perfect for the Lumberjacks.

“We’re a do-or-die type of team,” Hanson said. “When our backs are against the wall we’re going to respond.”

This will the third straight weekend – and fourth out of the last five – that the Jacks have played home games on Friday and Saturday night. They have taken advantage of the long home stand, winning five of the eight games, and picking up 12 of 16 possible points in the process, since two of the losses were in overtime.

The Jacks have 15 games left in their 60-game regular-season schedule. Eight of those games will be at L.C. Walker Arena.

The Lumberjacks have been a very dramatic team in recent weeks, thrilling their home fans with several last-second victories, including overtime shootout wins on Jan. 21 and 27. 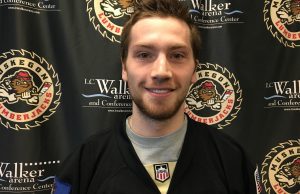 The most exciting win of the weekend came on Friday, when the Jacks snuck past Youngstown 2-1.

The game was tied 1-1 with 1:35 left when forward Austin Alger, acquired in a trade with Omaha earlier this month, scored the game-winner with a wrist shot from between the faceoff circles.

“The play started back in our zone when we won a battle behind our net and came out with the puck,” said Alger, 19, who has a total of 13 goals and 16 assists this season. “I got it to Svech (teammate Andrei Svechnikov) and he took it in and I trailed behind the play.

“He gave me a nice pass, I made a nice move around the defender, there was a lane to the net, so I decided to shoot, and I was lucky enough to score.

“It was extremely exciting, and it came at a good time in the game.”

Another exciting moment came on Saturday, when the Lumberjacks trailed Chicago 2-1 late in the game. Garrett Van Wyhe scored with only 1:07 left in regulation, tying the game, forcing overtime and securing at least a point for the team in the standings.

The Jacks went on to lose 3-2 in overtime, but returned the favor by capturing a 3-1 victory in Chicago on Sunday.

Forward Collin Adams has 21 goals and 23 assists for 44 points. He’s tied for third in the scoring race with Colin Thiesen of Dubuque.

Svechnikov has 22 goals and 21 assists for 43 points. He’s tied for fourth place with Nick Swaney of Waterloo.

Overall the Lumberjacks have the fourth highest goal total in the 17-team USHL. Waterloo leads the league with 149, Chicago and Dubuque have 144 apiece while Muskegon has 140.

Watch out for flying pucks!

Arena announcers are always warning fans to watch out for flying pucks.

Coaches are at even more risk, because they’re standing just a few feet from the action, with no protection from the glass.

Lumberjacks Assistant Coach Todd Robinson was standing in his usual spot behind the Lumberjacks bench during Saturday’s game against Chicago when a puck came flying off the ice and slammed into his right ear.

“It wasn’t too bad,” said Robinson, who’s in his third season as an assistant coach with the team. “I was talking to one of the players, I didn’t see it coming and it hit the side of my head.”

Robinson is no stranger to freak hockey injuries, after playing a 15-year pro hockey career, including six seasons with the Muskegon Fury and two with the old Lumberjacks pro team.

Robinson said he didn’t get stitches in the locker room between periods.

“There was an option (to stitch the wound), but they had to drain it first, then they ended up just putting glue on it. There wasn’t enough time for stitches.”

Ironmen fall to Kansas City Phantoms 50-47, fall to 0-3 in their new league