It’s a question that many professional and college athletes struggle to answer, once the final whistle is blown or buzzer sounds, signaling the end of their playing careers.

It’s often difficult to come to terms when it’s time to step away, since they’ve dedicated nearly their entire lives to becoming the best they can be in their respective sports. 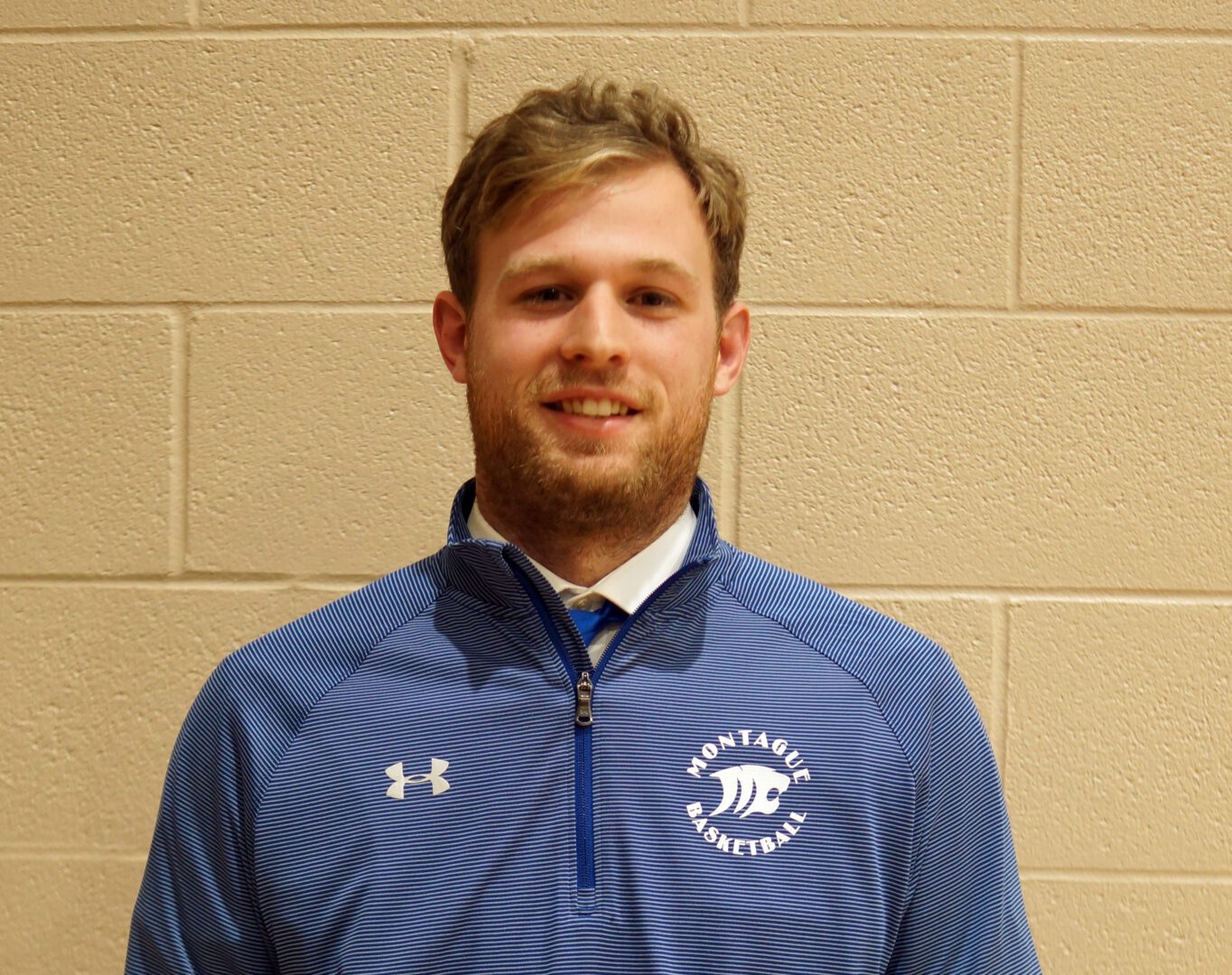 For Montague’s Cody Kater, his end-of-the-road moment came in the spring of 2015, when he decided not to apply for a sixth season of eligibility as a quarterback for the Central Michigan University football team.

It marked the end to a topsy-turvy college career that also saw stops at the University of Cincinnati and Grand Rapids Community College, and challenged Kater with a crushing season-ending injury at Michigan Stadium and the loss of his starting spot the next season.

“Last year, I thought about (what could have been) every day,” Kater said. “But now, in the position I’m in, I try not to play the ‘what if’ game.

“I really have no regrets at all.”

Instead of dwelling on a college career that didn’t live up to his hopes and dreams, Kater has taken a big step forward in his next goal in life — coaching.

“About a year ago, I set a goal for myself to be a head coach at the high school level before I turned 26,” he said.

Like he did so often during his playing days at Montague High School, Kater, 25, reached his goal. He was named the varsity girls basketball coach at his alma mater in August, taking over a program that had a solid 15-win season in 2015-16. 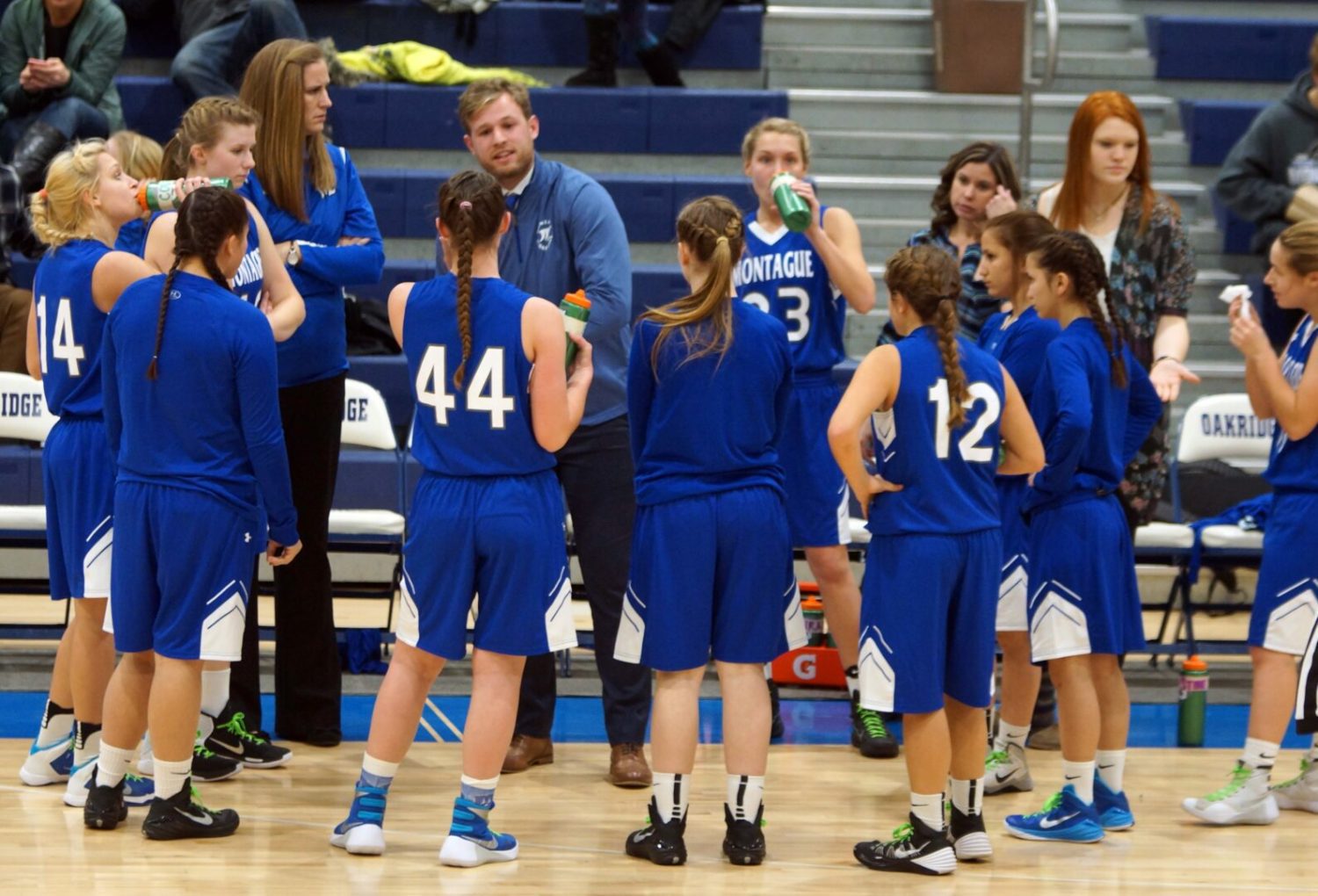 Coach Kater talks to his Montague girls basketball team during a time out. Photo/Sherry Wahr

But for Kater, becoming a first-time head coach didn’t come without some self-doubts, which seems inconceivable for a former prep quarterback who threw 79 career touchdown passes while leading Montague to back-to-back state football championships in 2008 and 2009.

He is also the school’s all-time leading scorer in boys basketball.

“There were some doubts stepping into the position, even though I kept telling myself that kids are kids and basketball is basketball,” he said. “But I wasn’t sure how I’d handle coaching girls for the first time, and how they’d respond to my coaching.”

Kater admits every day is a learning experience, and he’s had to deal with some unforeseen challenges through the opening months of the basketball season.

Montague lost standout center Emma Flagstead to a season-ending ACL knee injury during the opening practice, and the team has battled through other injuries, but the Wildcats have clawed and scrapped their way to a  6-7 overall record and 5-4 in the West Michigan Conference.

Kater said he’s tried to place a heavy focus on fundamentals and developing a passion for the sport — something that drove him when he was an athlete at Montague.

Coach Kater draws up a play for the Wildcats. Photo/Sherry Wahr

“Basketball probably was my favorite sport growing up,” he said. “It’s just that I got caught up in the craze of football recruiting and the possibilities I had to play at the next level.

“But both of my older brothers (Kyle and Derek) played basketball at Montague, and I remember watching them all the time in the stands. One of the greatest lessons I learned from my dad (Brad) was just to watch the game and learn. I’d be up in the stands as a kid playing with my action figures, but I was always there.”

Kater has gained a lot of insight as an athlete over the years. He talks about the tremendous amount of work required, the recruiting process, and the harsh realities he faced when competing for playing time at the collegiate level.

He earned the starting quarterback job at CMU during the 2013 season, but suffered a season-ending broken collarbone in the first quarter of the season opener against the University of Michigan. The next year, he lost his starting role for good, and only saw action in two games.

The writing was on the wall, he said, so he decided to step away from the game for good following the season.

“Sure, you’ve got all your buddies there, your teammates, but I just looked at it like I can’t play this game forever,” Kater said. “At some point, it’s time to move on. I just hung it up before they did.”

As far as his developing coaching style in basketball, Kater said he’s been largely molded by his old coaches at Montague, including his two varsity coaches, David Osborne and Jeremy Goorman, as well as Wildcats’ JV coach Bob Peterson.

Before he jumped into basketball, Kater spent the past two seasons working for his former varsity football coach, Pat Collins, as the quarterback coach at Montague. He has helped groom a trio of outstanding Wildcat signal-callers – Jacob Buchberger, Dylan Stever, and next season’s expected starter, Sebastian Archer.

“It’s been a lot of fun,” Kater said. “I knew I had a lot to offer and Coach Collins has been so open and shown me a great amount of respect. He’s very open to new things, and if there’s something that I feel will work and I present it to him, he’s all for it if it gets the right results.”

Kater earned his teaching degree from CMU and will begin student teaching soon.

“I’m hoping to find a job as a teacher and continue to coach,” he said. “Hopefully, I can stay around here. I love being at Montague. I know the type of people that make Montague what it is.”

Kater is cherishing the opportunity to give back to a community that provided him with so much throughout his youth.