MUSKEGON – It’s gotten to the point where Muskegon Lumberjacks fans can almost count on a victory when they purchase tickets at L.C. Walker Arena.

The Jacks came into Saturday’s game against Madison with a 14-5-3 home record this season,

including a 9-3 mark since the beginning of January.

But you can’t win them all.

The Jacks got off to a good start Saturday, grabbing a lead midway through the first period, but it was all downhill from there in a 6-4 loss to the Capitols in front of 2,695 hometown fans.

“We didn’t execute from the drop of the puck,” said Lumberjacks Coach John LaFontaine. “You can still find ways to win these games, but you have to play better defensively.

“There are no excuses. There is no question this was a winnable game.”

The Jacks ended up splitting the two-game weekend series with Madison and saw their two-game win streak come to an end. 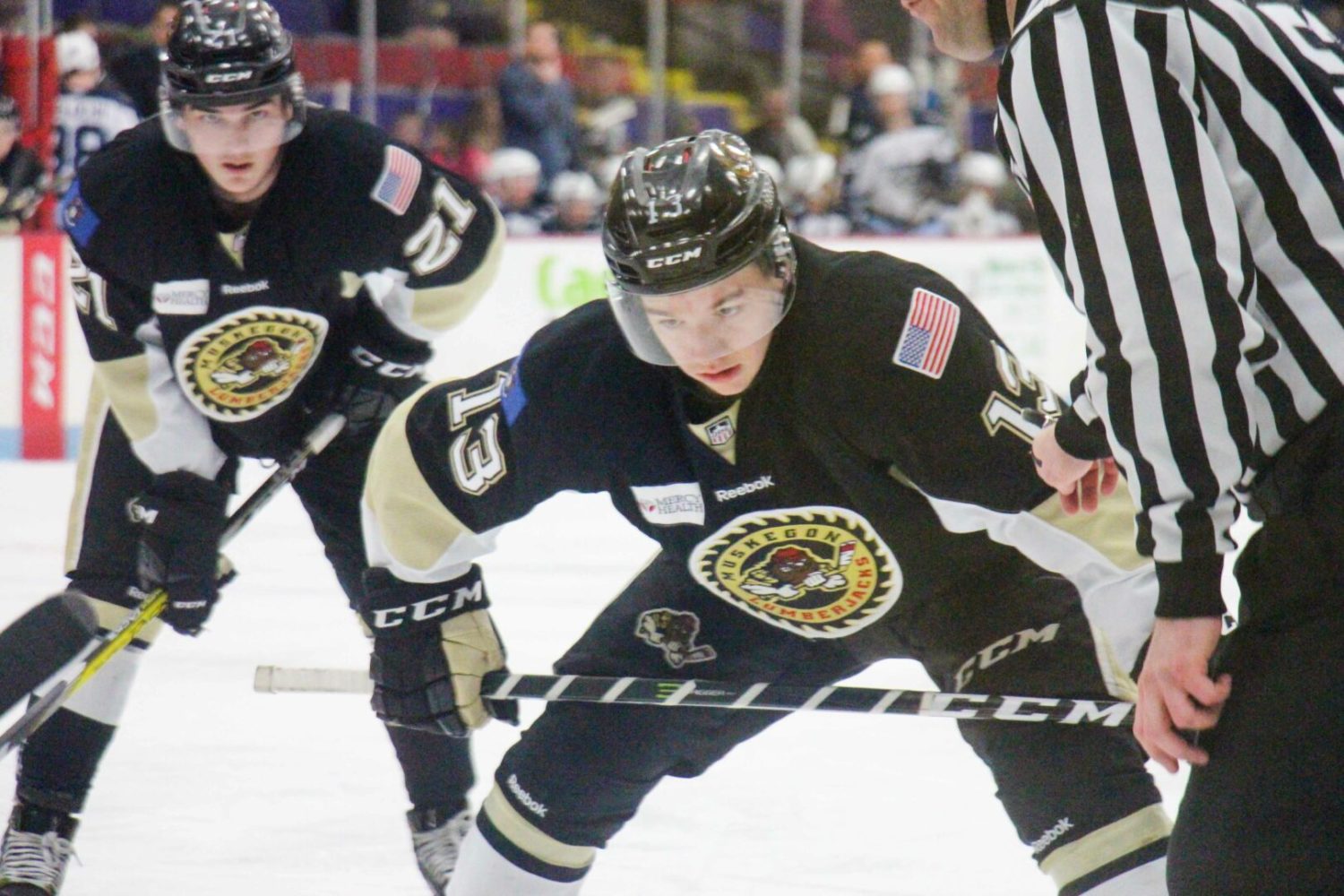 Collin Adams eyes the faceoff for Muskegon with Casey Gilling in the background. Photo/Jason Goorman

They fell to 28-15-4 on the season and remained tied for second place in the USHL’s Eastern Conference, pending the results of Saturday’s Dubuque-Cedar Rapids game. They have 13 games remaining in the regular season.

The Lumberjacks will hit the road for two games next weekend in Youngstown, then return home March 9-10 against Bloomington.

One Lumberjack had a productive night – Jachym Kondelik – who scored a pair of goals. Kasey Gilling and Jack McNeely had the other Muskegon goals while Koby Bender registered two assists.

It wasn’t such a great night for Jack goalie Keith Petruzzelli.

One night after turning in a great performance in a victory over Madison – and accomplishing a rarity by scoring a goal – Petruzzelli struggled against the Capitols, stopping only 26 of 32 shots.

But several of those goals came after the Muskegon defense coughed up the puck in their own zone, leaving Petruzzelli at the mercy of the opposition. 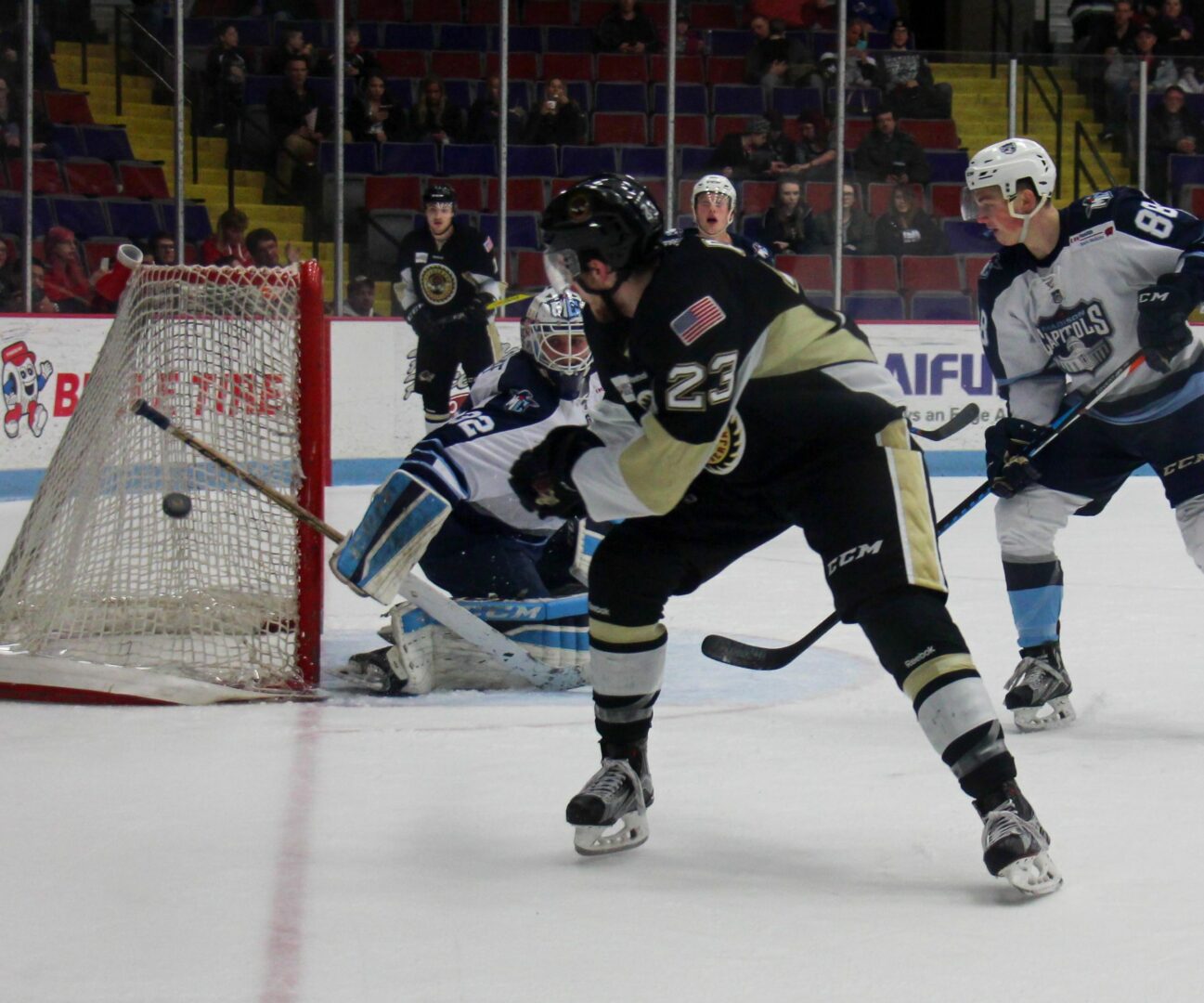 “He (Petruzzelli) is going to want some of those back,” LaFontaine said. “But we allowed too many odd-man chances that they capitalized on.”

The Lumberjacks opened the scoring at the 10:13 mark of the first period on goal from Gilling.

Madison tied the game 1-1 on a goal from Eetu Selanne at the 14:28 mark of the opening stanza.

The Capitols added two goals in the second period – from Billy Jerry and Kevin O’Neil – to grab a 3-1 advantage.

Kondelik scored his first goal at 17:49 of the second period to pull Muskegon within a goal. But Madison’s Vincent de Mey answered at 18:56 to put the Capitols up 4-2.

The Capitols increased their lead to 5-2 with a goal from Mick Messner at the 5:24 mark of the third period.

The Lumberjacks responded at the 9:55 mark on Kondelik’s second goal of the evening.

Madison added a goal from Anthony Callin at 14:05, before the Lumberjacks closed out the scoring on a McNeely goal 15:25 into the final stanza. 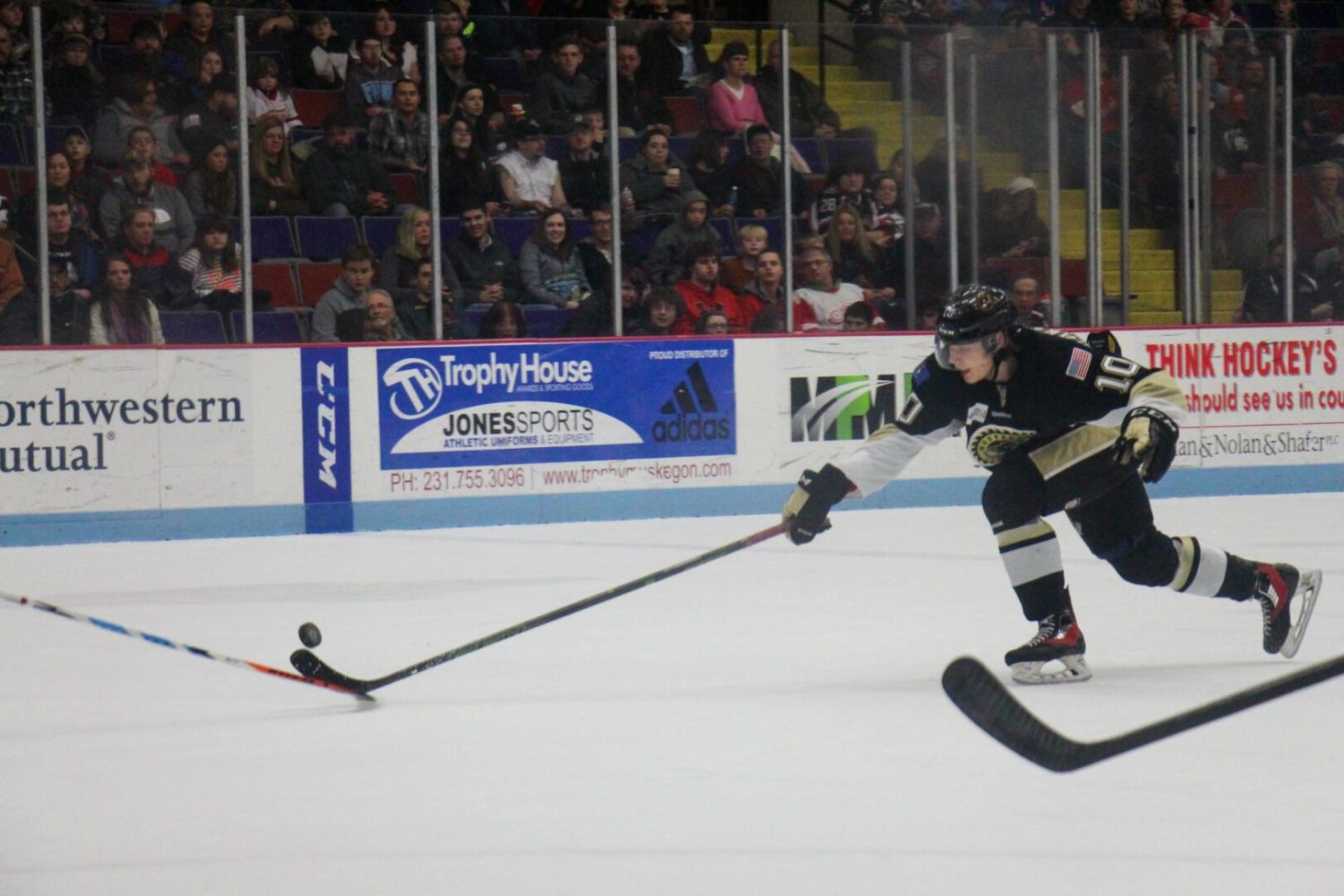 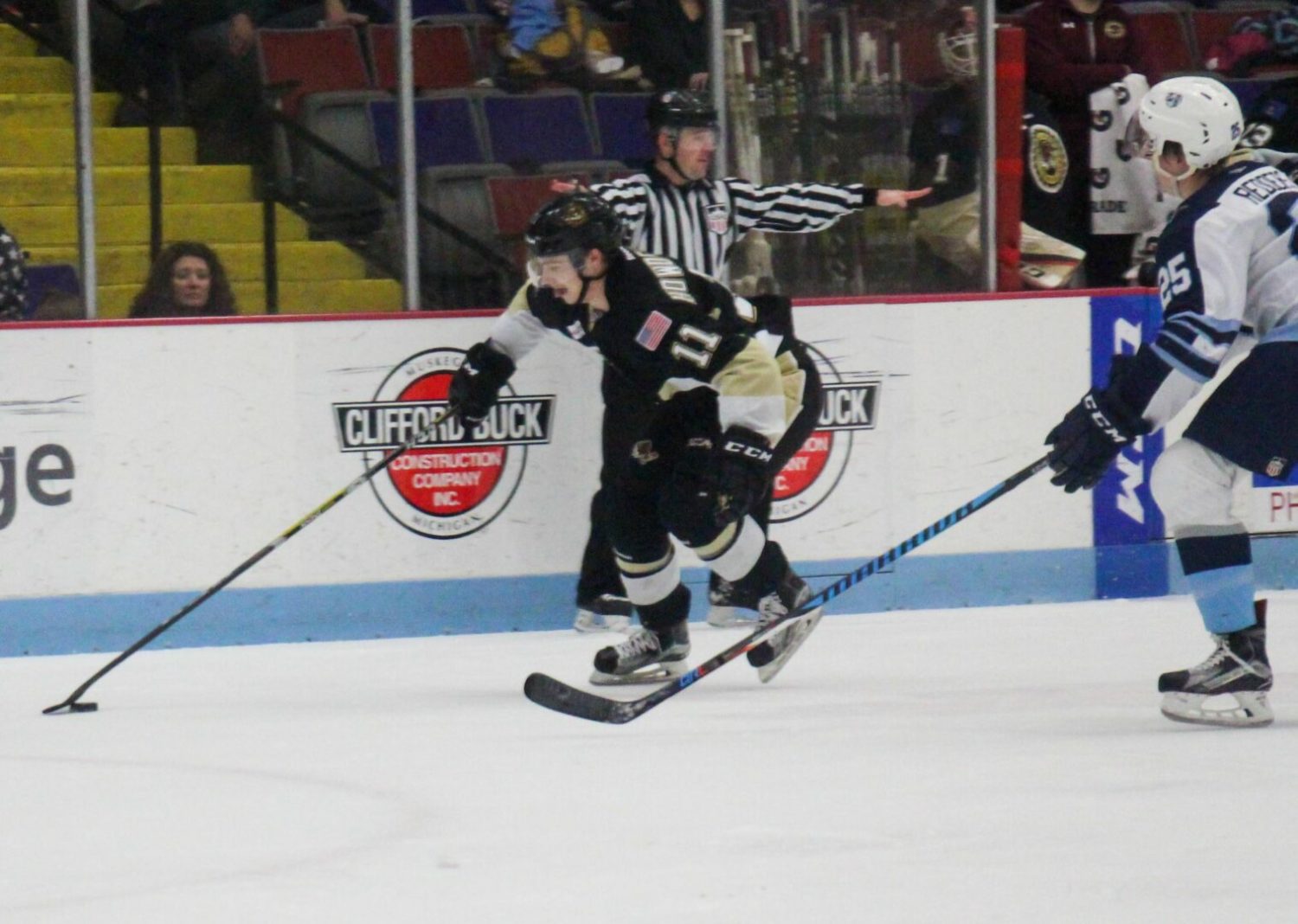 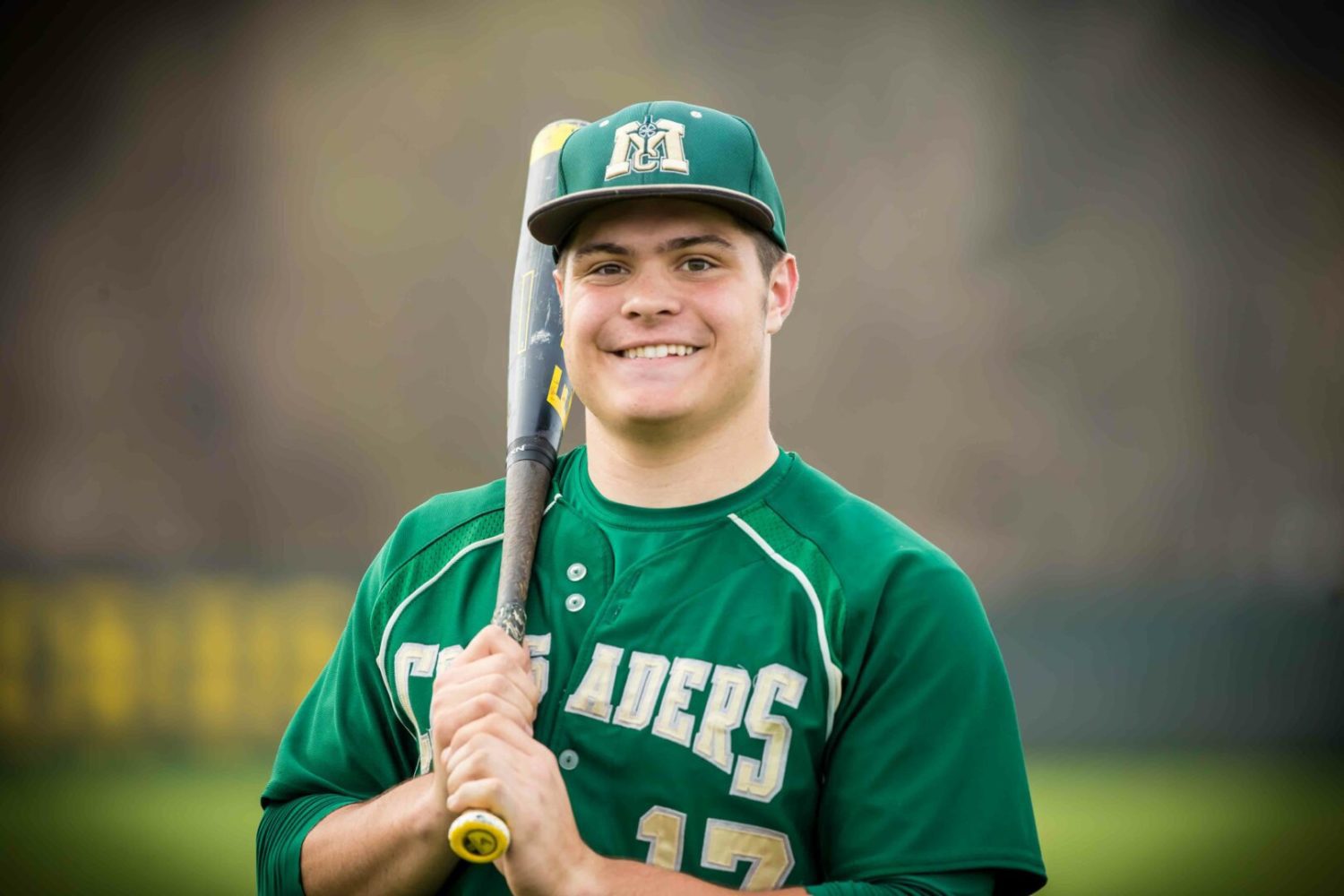