needed coming into this season.

The Bucs would very much like another shot at the powerful Big Reds in postseason play. 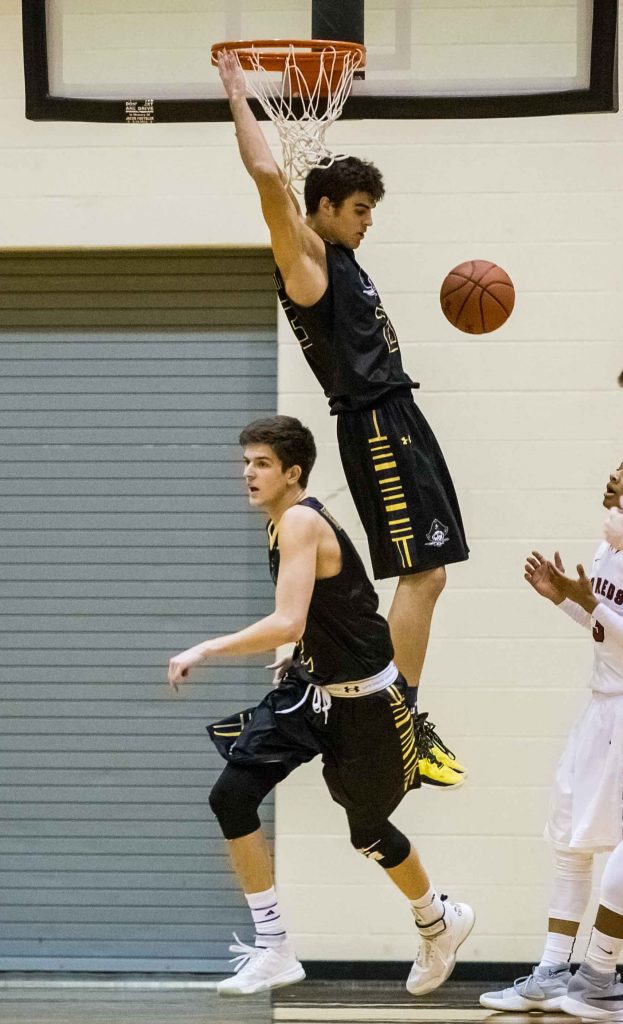 Ross Koella dunks the ball while Zac Holman gets back on defense against Muskegon in districts last season. Photo/Tim Reilly

And they seem to be in good shape to take on that challenge with their recent hot streak, which has them in second place in the tough O-K Red Conference.

Seniors Ross Koella and Zac Holman have led the way with double-digit scoring, strong rebounding and big plays in the clutch.

They will be on the court when Grand Haven tries to continue its recent success in a tough conference game on Tuesday at Rockford. And they will be ready if they get to play undefeated Muskegon when districts roll around in the first week of March.

“We thought about that game over the whole summer and over the whole fall,” Koella said about the tournament loss to Muskegon. “That will be a big game for us if we face them again. We’re looking out for them.”

Grand Haven had a few low points earlier this season. They lost 45-37 to Muskegon in a regular season game in December, then had back-to-back conference losses to East Kentwood and West Ottawa in mid-January.

But since then the Bucs have been on a tear, winning six of their last seven games. They are currently 13-4 overall and 7-3 in conference play.

Koella, a 6-7 center, and Holman, a 6-4 guard, have played big roles, particularly when close games have been on the line. 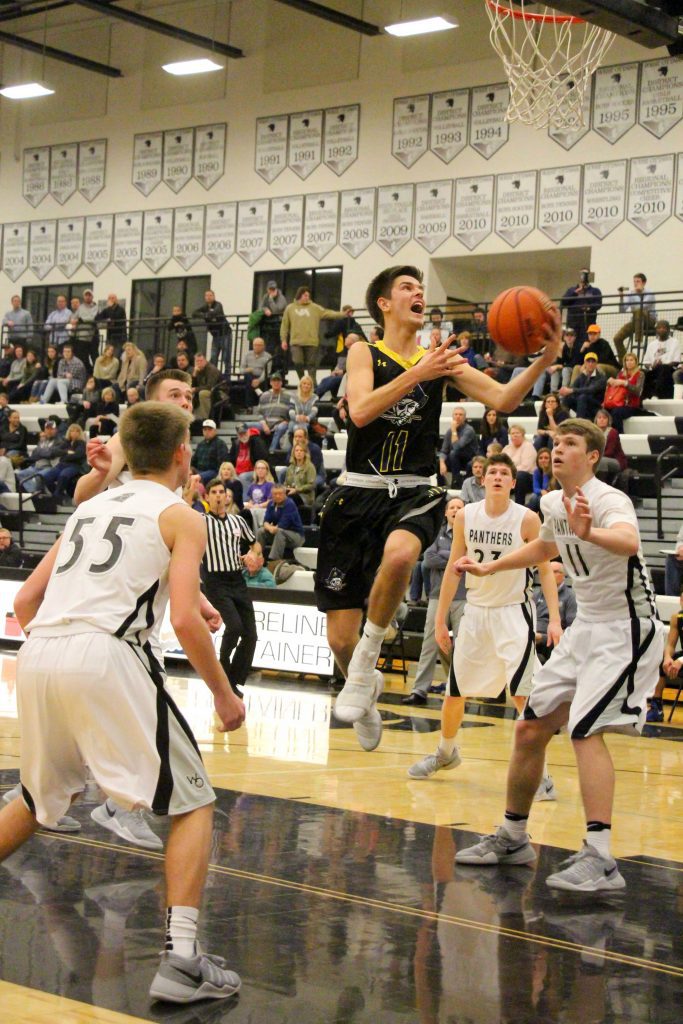 Last Friday, Koella hit a hit a layup, drew a foul and sank his free throw with four seconds left, giving the Bucs the edge they needed in a 60-55 win over Hudsonville.

“Ross has had several games where the majority of his scoring has come in the second half,” Grand Haven Coach Greg Immink said about Koella. “That’s just a sign of his ability to take over games at the end.”

Koella, a four-year varsity player, has given opponents fits for years with his combination of size, strength and athleticism around the basket. After averaging six points and five rebounds per game in his freshman and sophomore seasons, Koella improved to 10.5 points and six rebounds as a junior.

Tis season he has taken his game to an even higher level, averaging 14 points and just under seven rebounds per game.

“He has good size and athleticism to go along with it,” Immink said. “That’s a pretty rare combination, especially in high school. Those tools are a big advantage for him and something he utilizes. He’s continually gotten better through his career.”

The Bucs’ big man is also a force on the defensive end, and entered the season No. 8 on Grand Haven’s all-time block list. He said he would be honored to finish near the top of that list.

“It’s kind of a goal of mine,” Koella said. “I’m definitely not playing just for that, but it’s in the back of my mind for sure. It would mean a lot to me.” 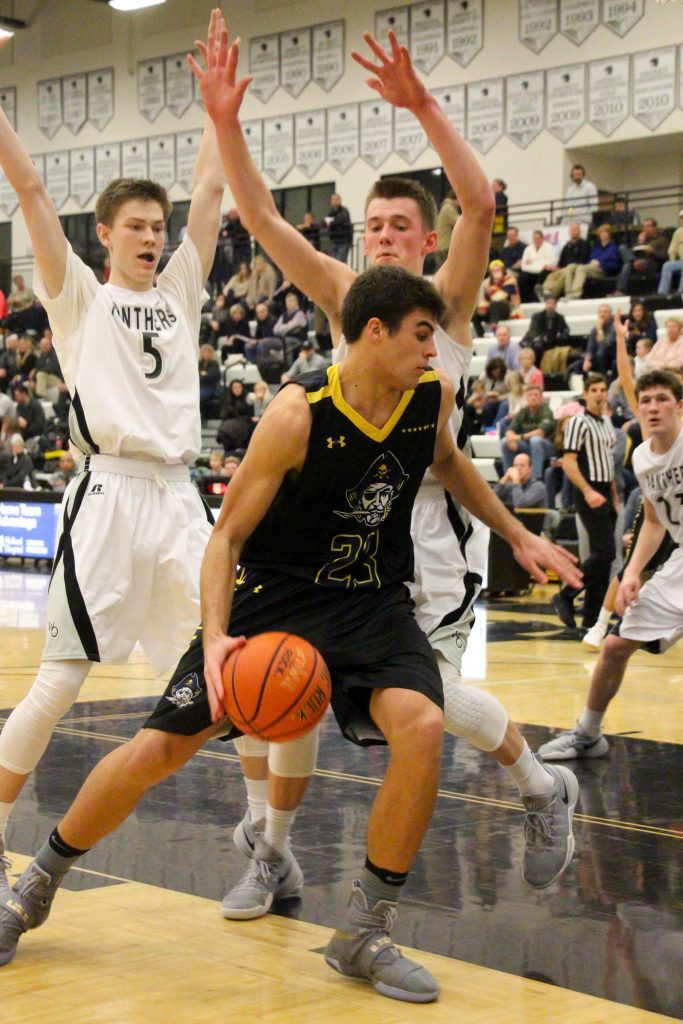 Koella’s success around the basket is partially due to the outstanding play of Holman, who can hit the jumper as effectively as he can drive the lane, opening up space for teammates to find success.

Holman, a three-year varsity player, averaged six points per game as a sophomore and nine as a junior. His rebounding is what has made him even more dynamic as a senior, leading the team with seven boards per game to go along with his 15.5 points.

“He’s a very heady player,” Immink said. “He knows where other guys are on the court and is able to get them the ball. The thing that sets him apart is his understanding of the game and his basketball IQ. I’s just at a very high level. I think next year, when he’s playing in college, he’ll probably end up playing a lot at point guard because of it.”

Holman said would not be in the position he is today without Immink.

“He has really pushed me,” Holman said about the Bucs’ second-year coach. “He has taught me how to finish through contact and make good moves to get around players. And he’s really helped me understand the game from a defensive perspective.”

That defensive understanding has proven useful, since Holman has the job of organizing his teammates and making sure everyone is positioned correctly on the court.

After the way last season ended, with the loss to Muskegon, it was important for the Bucs to become more efficient at shutting down opponents at key moments.

“We gave up a big three last year and (Muskegon) pulled ahead at that time,” Holman said. “So we’ve worked a lot on defense, just positioning-wise, and also on closing games with our shooting ability and free throws.”

Koella and Holman’s leadership on the court is clear through their stat lines, but Immink says it’s more than that.

“They’re just guys who choose to do the right thing, and because of that, they’re able to drag other guys along and help them do the right things, as well,” Immink said. “Both of them have that leadership quality and its contagious on the team.

“They certainly make me look good sometimes with their ability to do things on the court. It’s a luxury for a coach to have two guys like that. It’s really a great situation.”