WHIITEHALL – They are two rival schools separated by just a few miles, and their boys basketball teams went head-to-head on Tuesday with a conference title hanging in the balance.

So it’s only fitting that Whitehall and Montague played another barnburner. 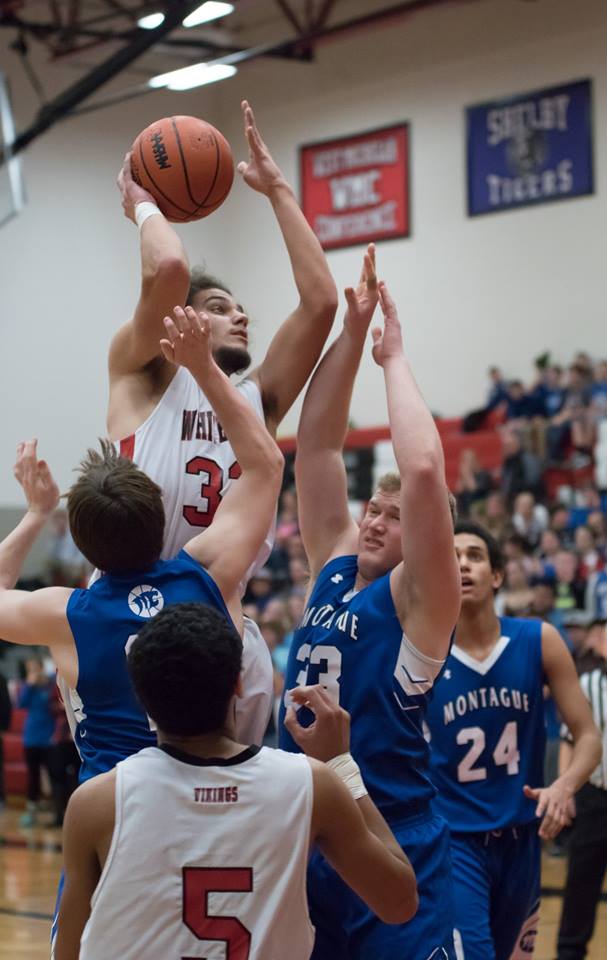 Whitehall senior Chris Corpe goes up for the shot over the Montague defense. Photo/Kris Rake

But in the end the Vikings withstood a thrilling Montague fourth-quarter rally and grabbed a 71-67 victory to clinch at last a share of the West Michigan Conference championship.

Whitehall, which had 14 3-pointers in the game, now has a two-game lead over Montague in the conference standings with two league games remaining.

“It was different guys getting hot,” said Whitehall head coach Nate Aardema, whose team improved to 13-2 on the season and 12-0 in conference play. “Sometimes all the emotion and energy can hurt you, but sometimes it helps you shoot, because you stop worrying about all the nonsense and just play.”

Whitehall’s Lucas Schumm and Drew Young scored 27 and 22 points, respectively, to lead the Vikings. The two seniors combined for 10 3-pointers, and continued their career-long streak of never losing to Montague.

“Drew kept us in the game,” Schumm said about his teammate. “That really helped us and it helped my confidence, because I knew if my shots weren’t falling I could lean on Drew. For me, once the first one went in, it was time to go.

“We still haven’t lost to them and I’m pretty thankful for that, because they made it pretty tight the last two games. It just feels good. To get a share of the title against them is nice.”

The Wildcats had a standout performance of their own from 6-foot-2 big man Josh Weesies, who finished with 26 points and seven rebounds. 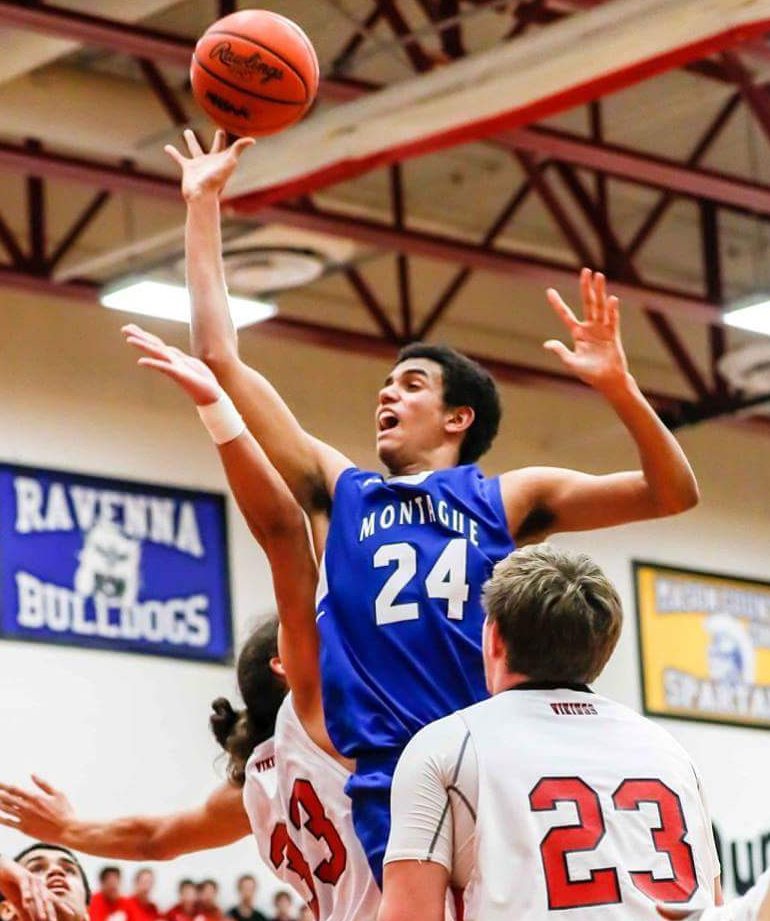 “Josh Weesies was phenomenal,” Aardema said. “We couldn’t stop him. We had our center on him, but Brandon (Rake) was a little bit hobbled. He hurt his ankle pretty bad against North Muskegon, so he was kind of gutting it out, but I don’t know if it mattered. We could have put three guys on Weesies. He was just bowling his way to the basket and finding ways to score.”

Weesies and Montague put the pressure on Whitehall early, forcing three quick turnovers and jumping out to a 12-2 lead.

But the Vikings kept it close by getting into the lane, drawing fouls and finding their way to the free-throw line, where they converted five of six shots in the first quarter.

The Wildcats again tried to bury the Vikings, taking a 22-14 lead a minute into the second quarter. But Young hit two 3-pointers and had two big steals to swing the momentum back in Whitehall’s favor.

Then Schumm got hot.

The standout point guard hit three unanswered triples on consecutive possessions to give the Vikings a lead they wouldn’t give up for the remainder of the contest. 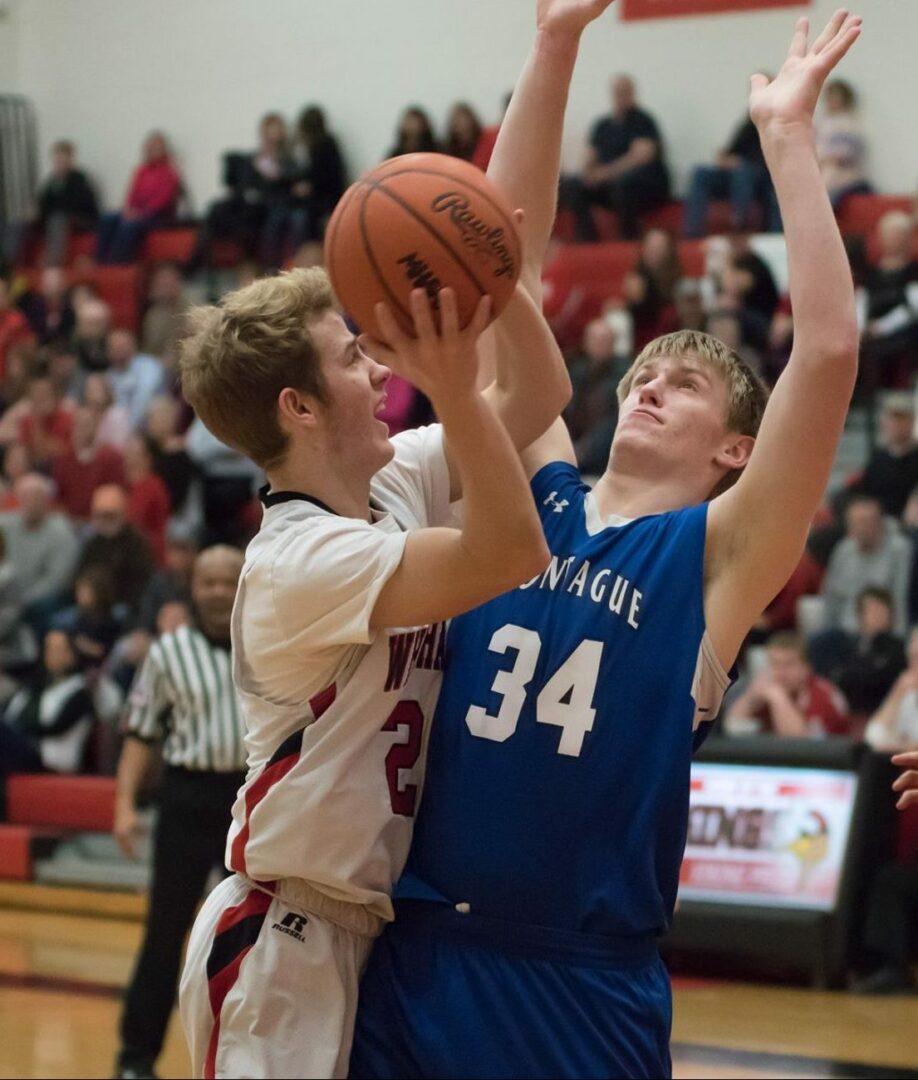 Whitehall carried a 39-31 lead into the halftime break and a 63-52 advantage into the fourth quarter. Casey Huizenga powered the Vikings in the third quarter with three triples.

Schumm hit two free-throws to begin the final quarter, which gave the Vikings their largest lead of the night at 13 points. Then Montague came roaring back, cutting Whitehall’s lead to 67-66 with 1:31 to play.

Hunter Mosher paced the Wildcat rally with seven points in the fourth quarter, while Abram Erickson and Merritt Hamann scored four points apiece down the stretch.

But Young hit a layup, then added two clutch free throws with five seconds left, to ice the victory for Whitehall.

Erickson and Kenyan Johnston finished with 17 and 11 points, respectively, for Montague, which fell to 12-3 overall and 10-2 in the league.

Whitehall will travel to Hart on Friday, where a victory would secure the outright conference championship.

“The target on our back just keeps getting bigger,” said Aardema, whose team tied Shelby for the conference title last year. “The kids were mad at me last year because I put ‘co-champions’ on the t-shirts. I said if we want to get it outright then we have to come to work tomorrow and start prepping for Hart.” 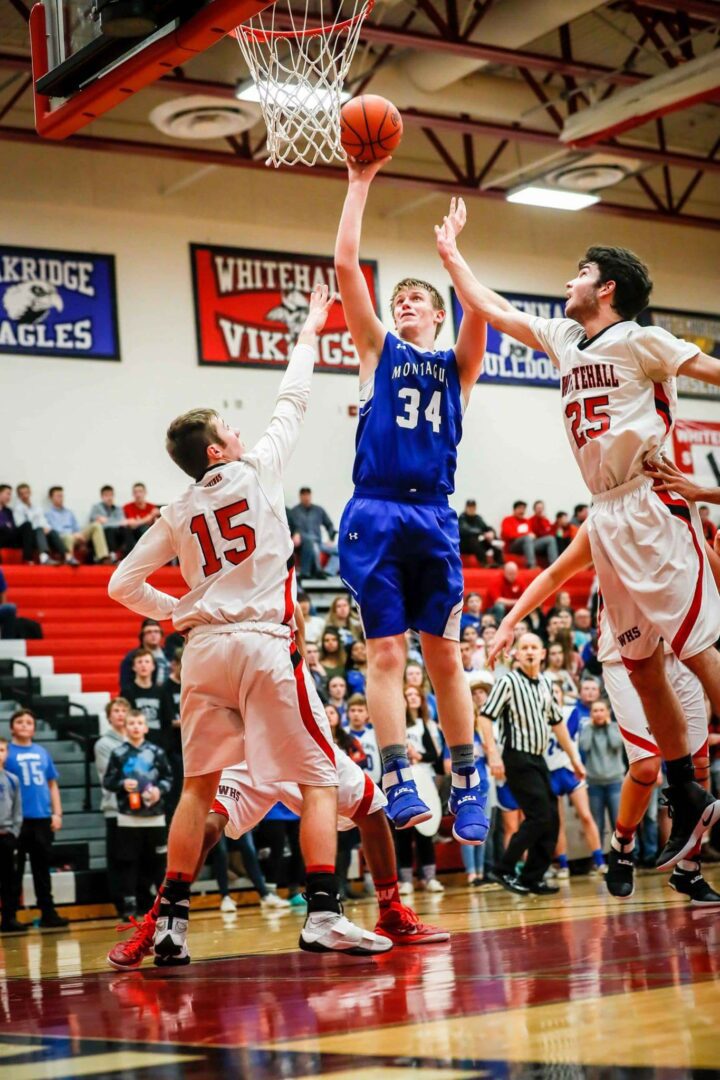 Hunter Mosher gets up on the 10-foot jumpshot for Montague. Photo/Tim Reilly 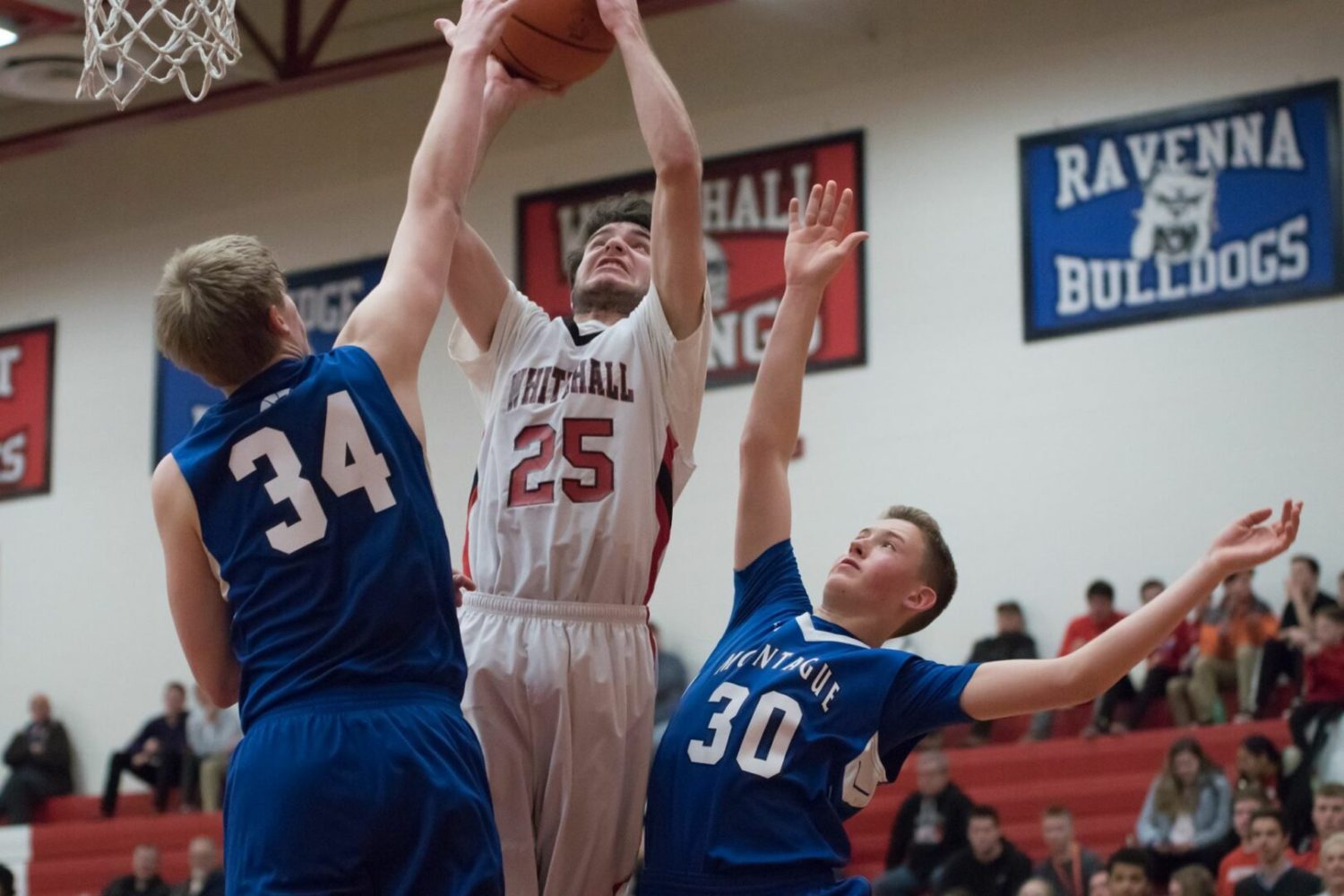 Drew Young powers his way through the lane past Montague’s Abram Erickson and No. 34 Hunter Mosher. Photo/Kris Rake 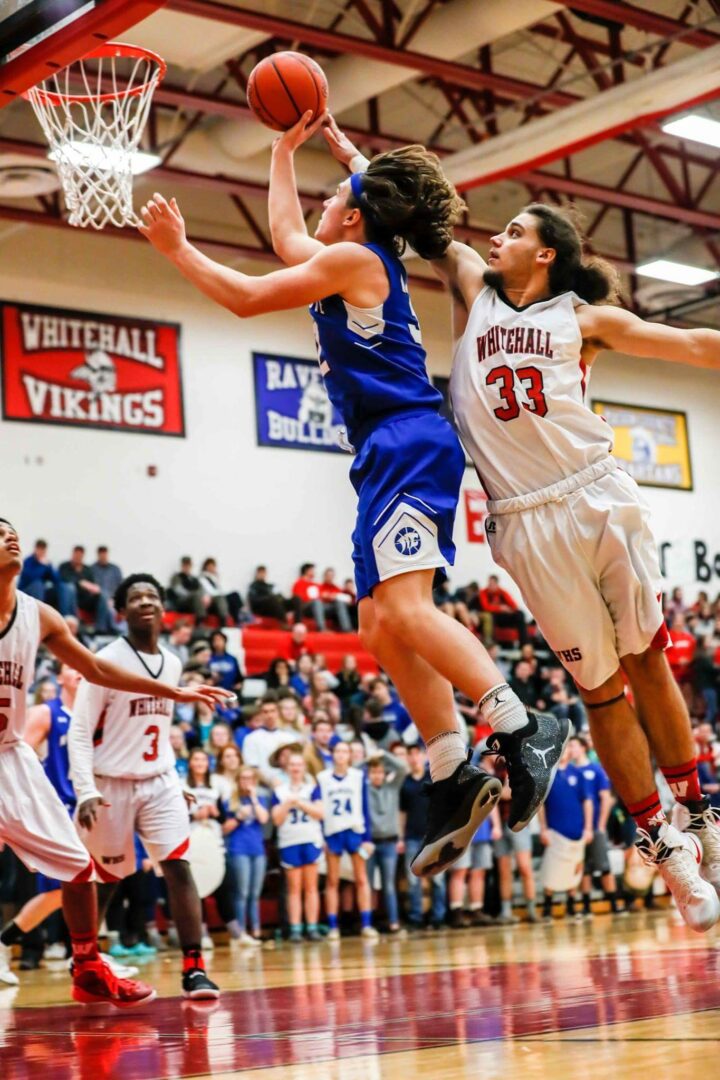 Josh Weesies gets the inside edge as Whitehall’s Chris Corpe goes for the block. Photo/Tim Reilly 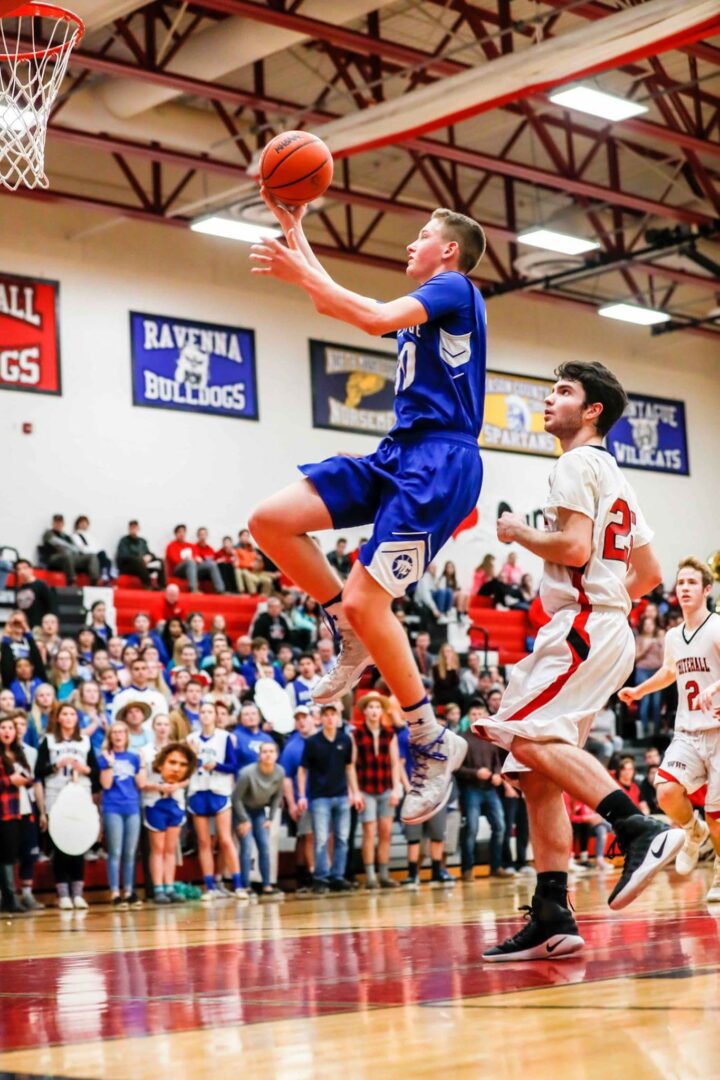 Abram Erickson glides in to the bucket for Montague. Photo/Tim Reilly

Fowler, Brant and Monette combine for 47 points as Holton gets by Hart 54-45