MUSKEGON – On paper, Bloomington is the type of team the Muskegon Lumberjacks should be happy to play as they battle to secure a playoff berth.

The Thunder are in sixth place in the USHL’s Eastern Conference and well out of playoff contention. 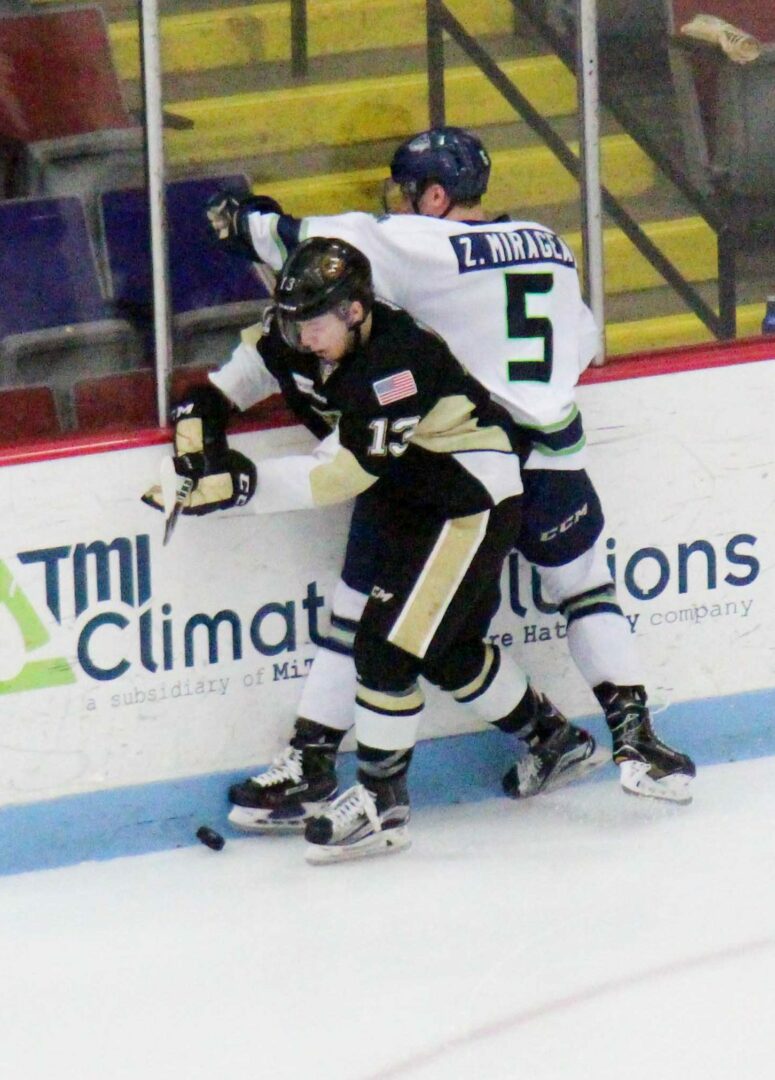 Collin Adams gets to the puck against Bloomington defender Zack Mirageas. Photo/Jason Goorman

But that’s precisely the type of team that can cause trouble this time of year, and the Thunder did that on Thursday, taking an early lead and pushing the Jacks to overtime.

But Zach Berzolla finally settled the issue in Muskegon’s favor.

The Lumberjack defenseman took a crossing pass from Collin Adams to the left of the Bloomington goal and scored with almost four minutes gone in overtime to give Muskegon a 2-1 victory in front of 1,567 fans at L. C. Walker Arena.

The big goal came in the 100th game of Berzolla’s USHL career. It also ended his personal 44-game goal-scoring drought, which dates back to Oct. 7.

“Casey (Gilling) battled for the puck in the corner and passed it to Adams, and he made a great dish to me,” said Berzolla, who has scored three of his four goals this season against Bloomington. “I shot the puck and I was fortunate that it went in the net.”

“It was good to come out with two points. Hopefully we make it to the playoffs and get home ice advantage.”

The Lumberjacks improved to 30-16-4 on the season. They are in third place in the USHL’s Eastern Conference with 64 points, three points behind Chicago and Dubuque, who are tied for first place.

The Jacks are now eight points ahead of fifth-place Green Bay in the race for the final playoff spot. The top four teams in the conference make the postseason. 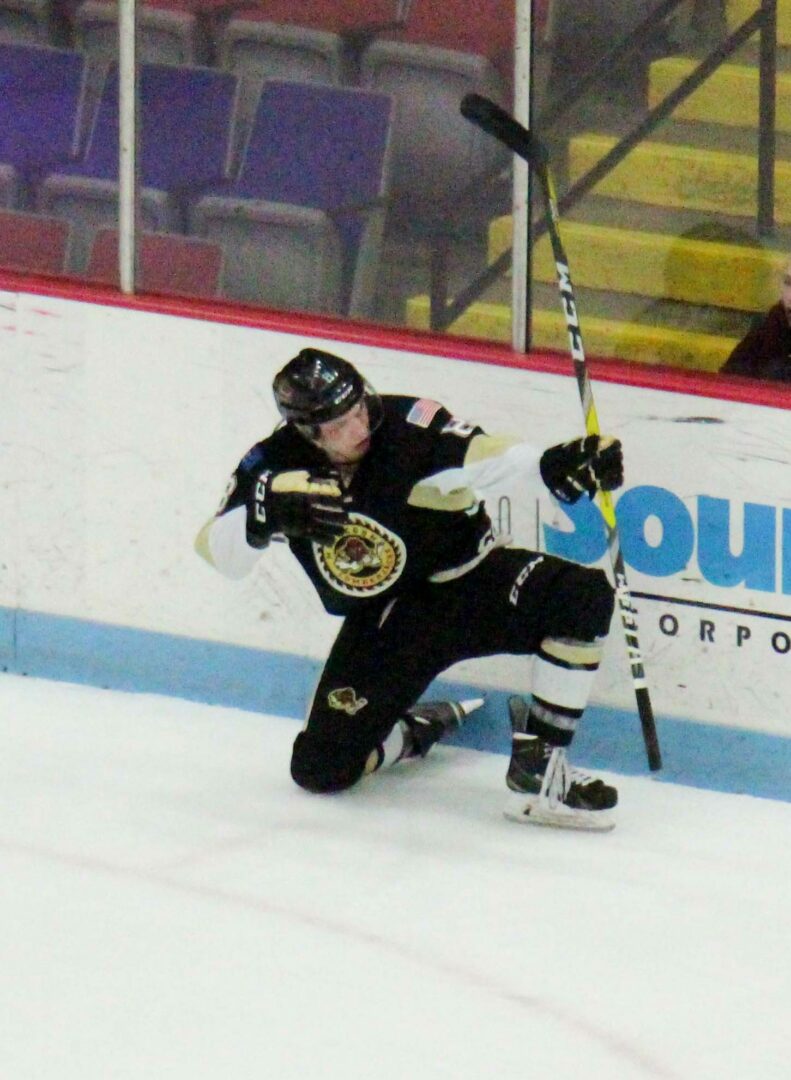 Muskegon will host Bloomington again on Friday night at 7 p.m.

While some fans might have come to the game expecting Bloomington to be easy prey, Lumberjacks Coach John LaFontaine said he was wary of the Thunder.

“We expected it,” he said. “I am happy with the way the guys stayed focused and didn’t panic. They bent but didn’t break. We competed hard tonight and we need to do that every night.”

Bloomington opened the scoring at 2:02 of the second period with a goal from Christiano Versich.

Casey Gilling tied the game with a goal for the Jacks at 17:29 of the second period. Marc Del Gaizo and Garrett Van Wyhe assisted on the tally.

The third period was scoreless, and the game went to overtime, allowing Berzolla to score the dramatic game-winner with assists from Adams and Gilling.

Muskegon goalie Keith Petruzzelli got the victory and improved his record to 18-9-0 on the season. 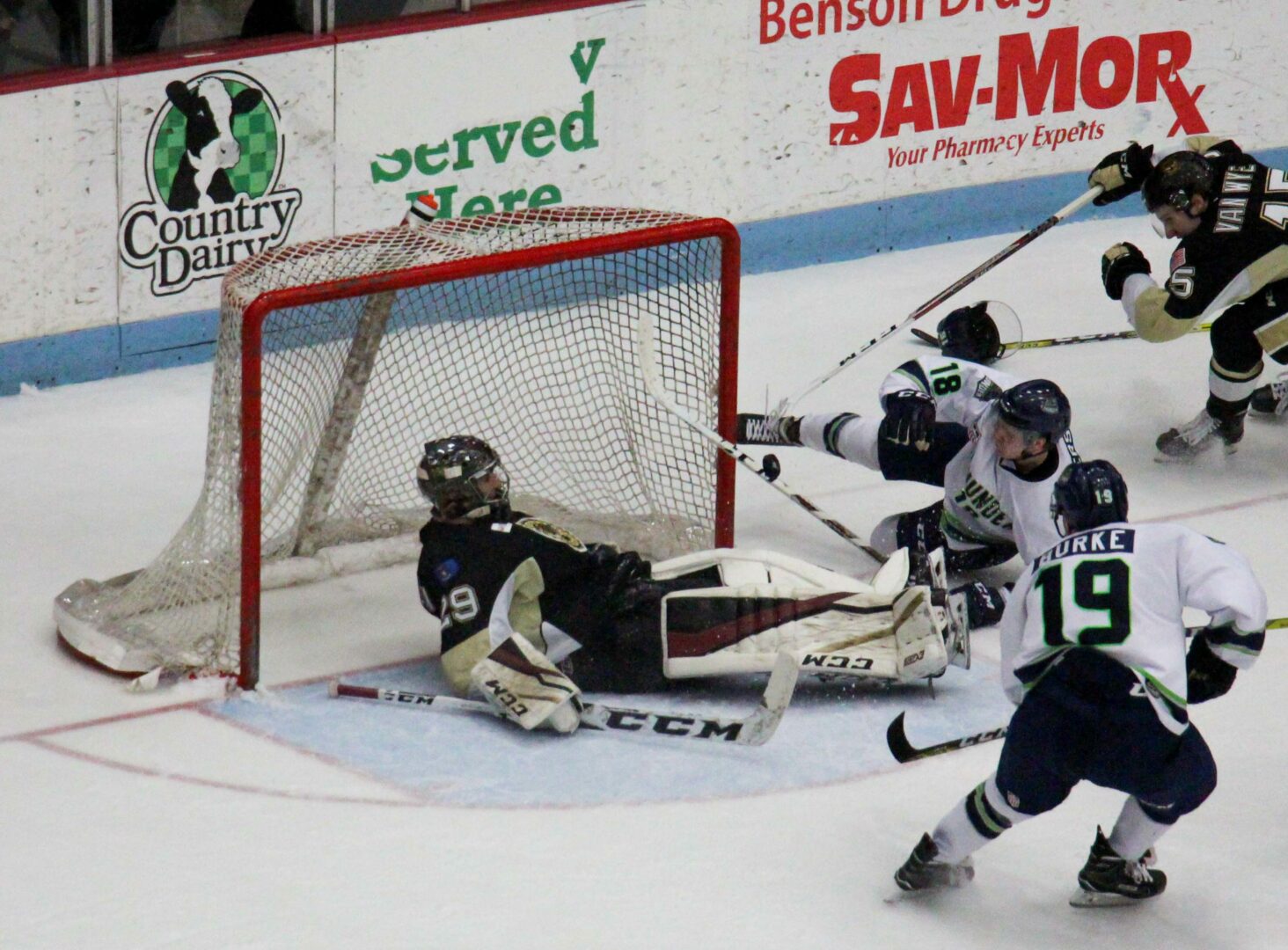 Lumberjacks goalie Keith Petruzzelli keeps his eye on the puck during the play on net. Photo/Jason Goorman

Mona Shores girls rally past Reeths-Puffer, keep the O-K Black title to themselves