They have too much firepower to stay quiet for very long. 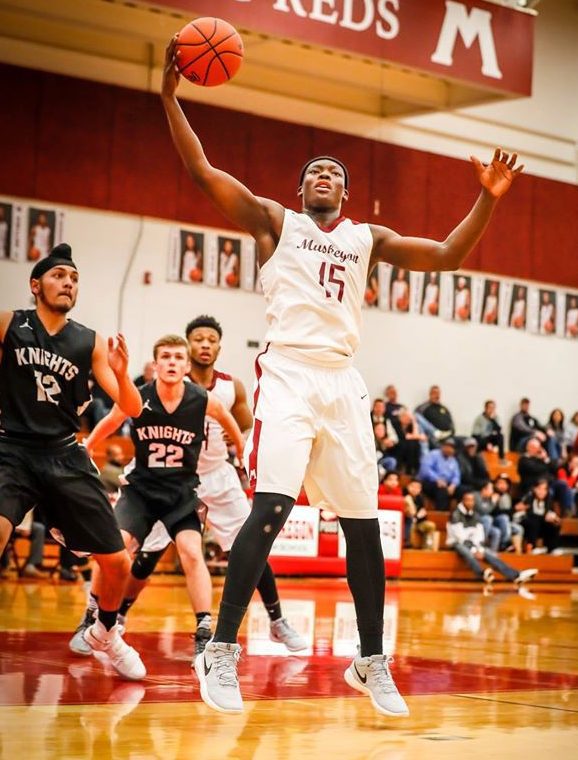 The undefeated Big Reds were sluggish in the first half of their Class A district semifinal contest against Kenowa Hills on Wednesday. They led by 16 points at halftime, but were capable of a whole lot more.

They demonstrated that in the second half when they raced to an impressive 72-24 victory over the Knights on their home court.

The Big Reds, who improved to 22-0 on the season, will face Grand Haven for the district championship on Friday at 7 p.m. at Muskegon High School. It will be the third straight year the two teams have played for the title.

Grand Haven defeated Grand Rapids Union 52-47 in the other semifinal on Wednesday.

“They passed the ball a lot and controlled the tempo,” Big Reds coach Keith Guy said about Kenowa Hills in the first half. “We were a step slow, and we could have picked up the energy. But we stayed disciplined on defense and our guys did a good job of not making mistakes.”

The game was scoreless for the first three minutes, with Kenowa Hills more than willing to slow the pace and pass the ball around the perimeter.

The patient approach didn’t help the Knights, who trailed 12-4 after one quarter.

The Big Reds increased their lead to 26-10 by halftime, before their offense came alive. 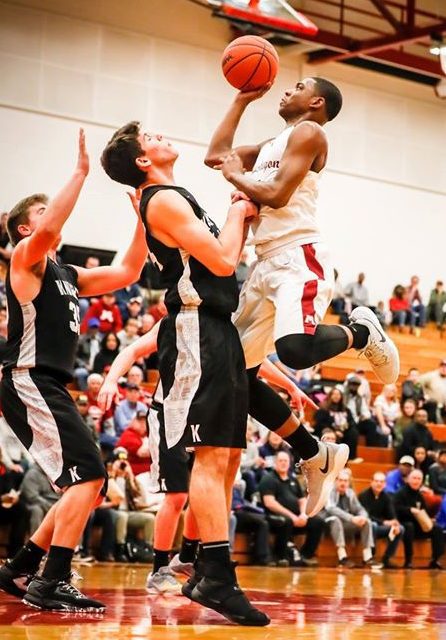 Jermayne Golidy caught fire in the third quarter, hitting three 3-pointers and scoring 15 points as the Big Reds stretched their lead to 52-14 heading into the fourth.

“We got better looks in the second half,” the senior guard said. “Once I saw the first 3 go in, I kept feeling it and kept shooting.”

The exclamation point on the night came with 1:40 left in the third quarter, when Golidy stole the ball at half court and finished with a dunk, then followed with a 3-pointer to give the Big Reds a 46-12 lead.

In their two district tournament victories, the Big Reds have outscored their opponents 148-53.

“This team can shoot the ball when they’re moving it,” Guy said. “We can be a dangerous team, as you saw, when we are doing that.” 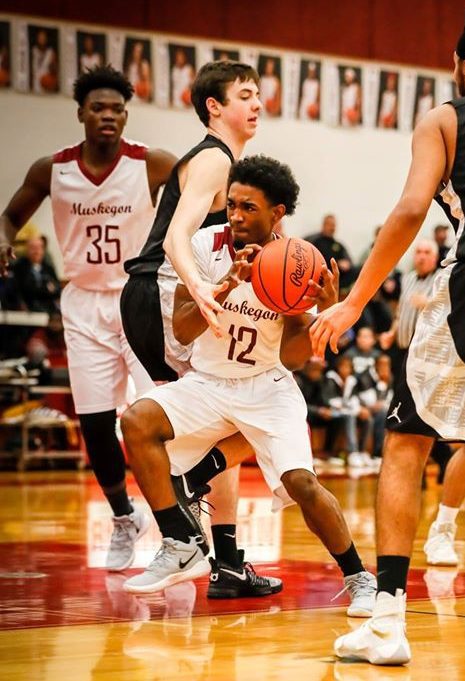 Amari Saucier slasher through the lane for the Big Reds. Photo/Tim Reilly 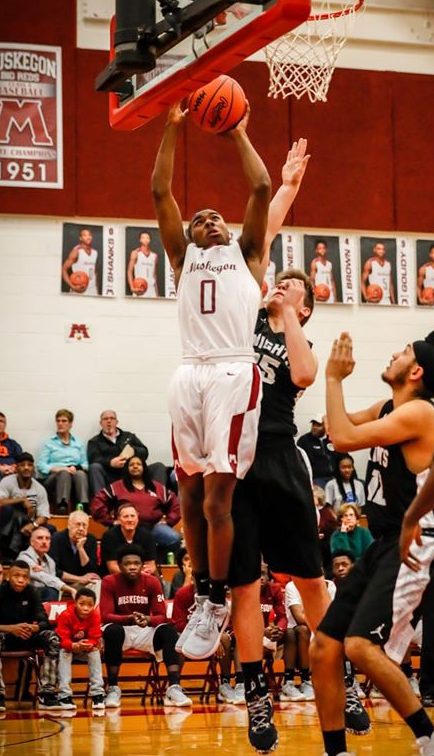 Muskegon guard Willie Shanks, Jr. goes up for the shot along the baseline. Photo/Tim Reilly 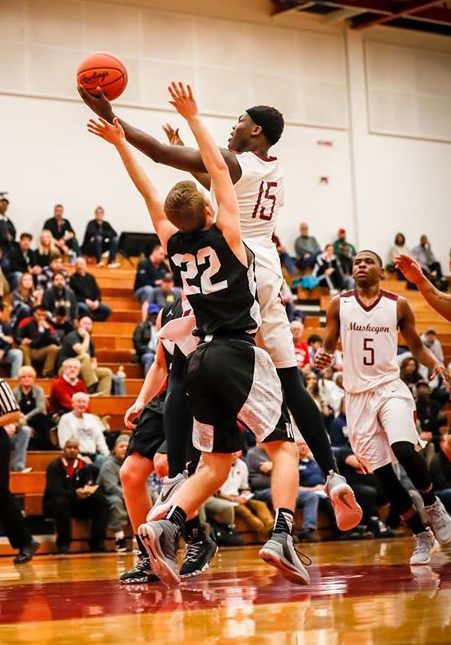 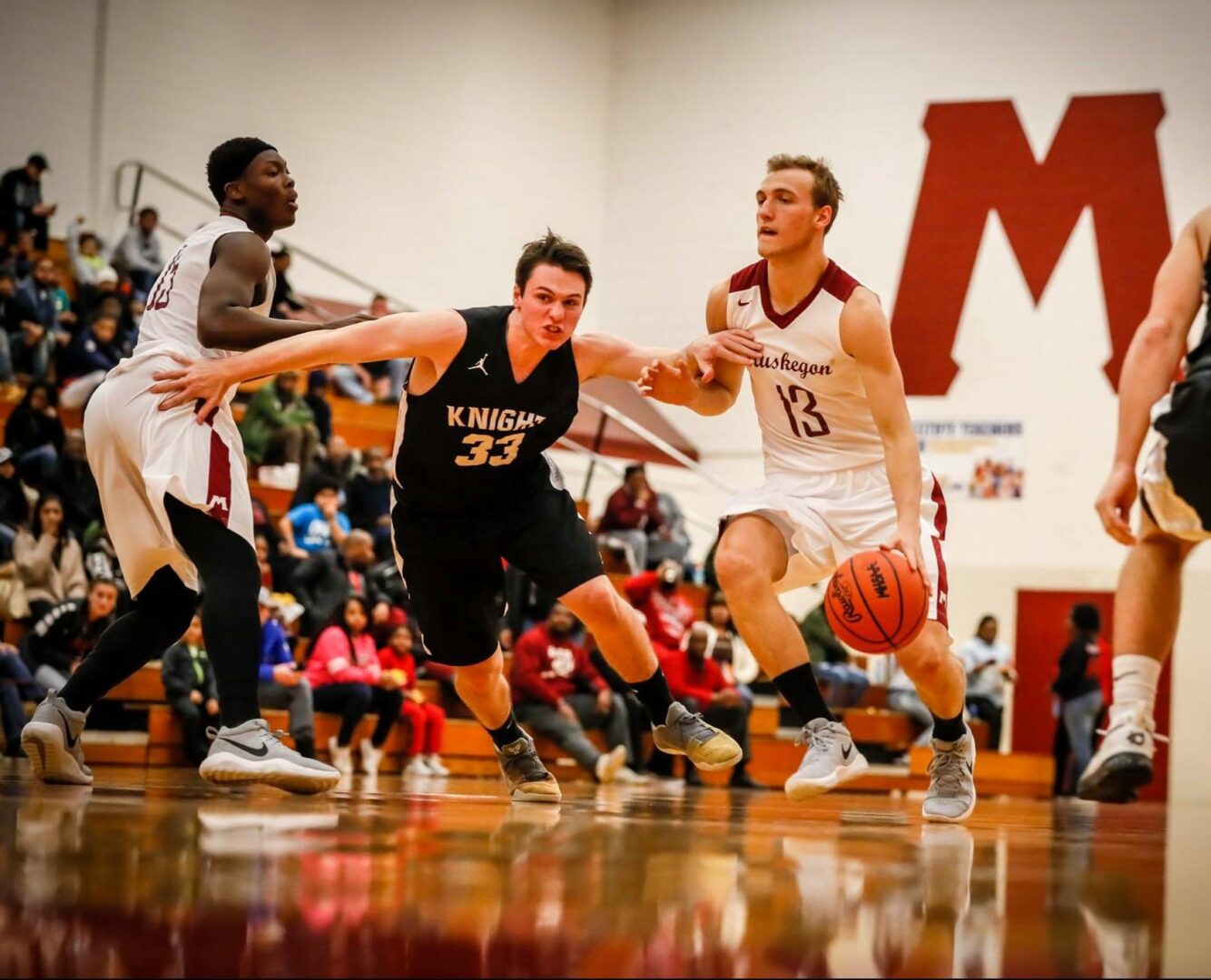