EAST LANSING – Josh Laman picked the perfect time to hit his first 3-pointer of the season.

Ludington’s sophomore center found himself with the ball with time expiring in overtime and the Orioles trailing River Rouge by two points in the Class B state semifinals on Friday.

A lot of players, particularly tenth-graders, might have buckled under the pressure at the big moment. 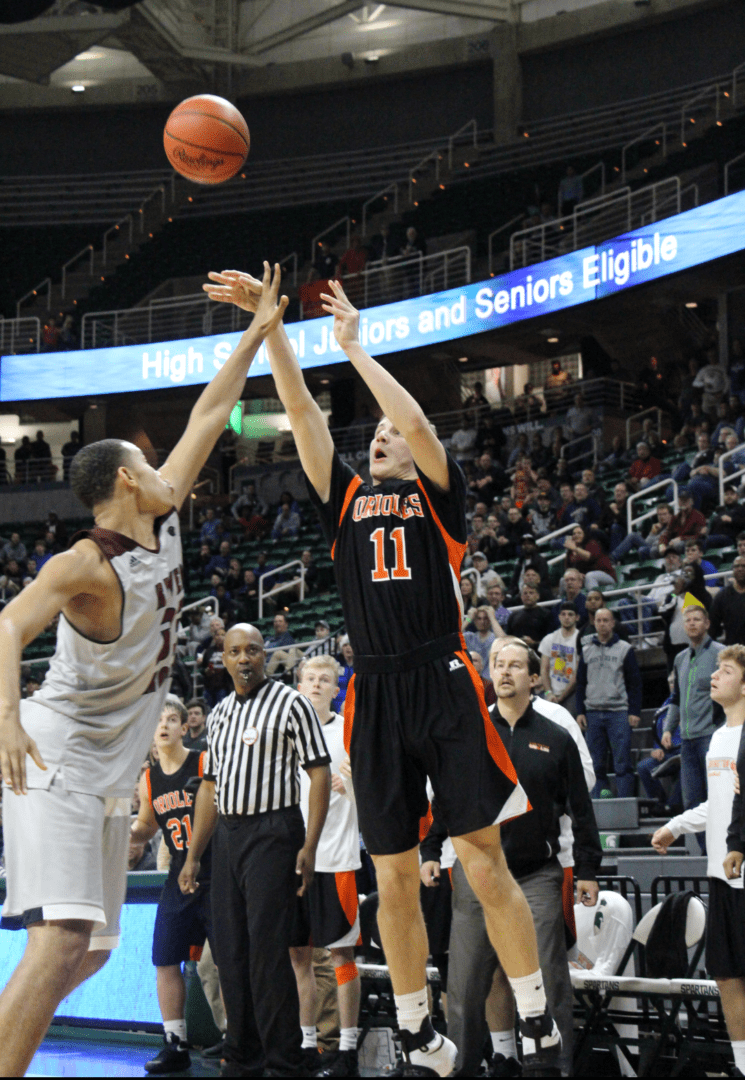 Josh Laman gets the Ludington shot up just in time to lift the Orioles to the Class B state finals. Photo/Jason Goorman

But Laman kept his cool and nailed a triple from the corner as the clock expired, giving Ludington an amazing 51-50 victory over heavily-favored River Rouge at Michigan State University’s Breslin Center.

Now the Orioles, a team nobody at the state level took very seriously, will play for a Class B state championship on Saturday at MSU against New Haven (26-1). Game time is 6:30 p.m.

“Time was winding down, so I just went to the three-point line, caught it, and I didn’t know how much time was left, so I quick shot it,” Josh Laman said. “It just went in.

Earlier in the week Ludington Coach Thad Shank said River Rouge would be the toughest opponent his team has faced all year. But he also said his players don’t back down from anybody, and that was the case on Friday.

“I love the fight in our kids,” Shank said. “We haven’t played a lot of close games this year. We never gave up. I thought we made some good decisions down the stretch in chaos.

“That was a huge shot by Josh. He’s thinking he’s going to look me in the eye and say ‘I told you coach I should have been shooting these 3’s all year long.’

“We get a chance to play another day.”

The Orioles played River Rouge basket-for-basket for most of the semifinals, but looked like they had run out of luck at the end. 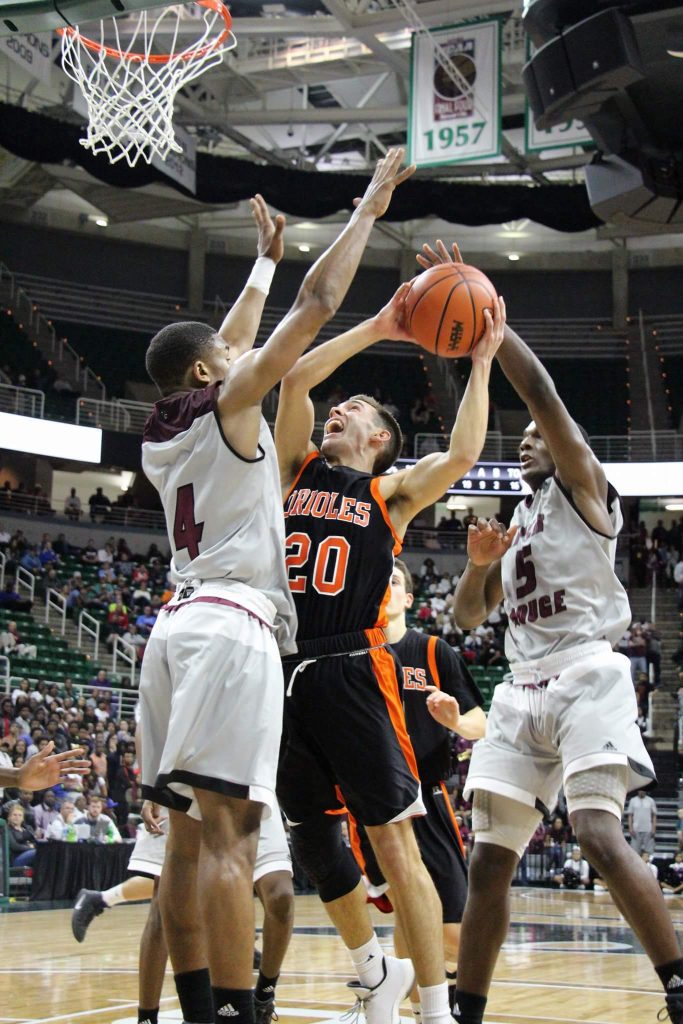 They trailed the Panthers by nine points with under two minutes left in the fourth quarter, and were hurt when senior Sam LaDuke, their second-leading scorer, fouled out with 2:34 left.

But they somehow managed to rally and force overtime.

Senior Calvin Hackert was the hero at the end of regulation, hitting a triple with 49 seconds left to pull Ludington within one point at 43-42.

Then Hackert hit one of two free throws with 20 seconds left, tying the game at 43-43 and forcing the extra session.

River Rouge helped the Orioles by turning the ball over twice in the final minute.

River Rouge, using a slow-down offense, hit five free throws to gut out a 50-46 lead with 50 seconds remaining. And Hackert drew his fifth foul at that point, leaving Ludington without its top scorer for the rest of the contest.

But the other guys took care of business the rest of the way.

Josiah Bandstra got a rebound and layup with 32 seconds left, pulling the Orioles within two points.

Then a huge double-dribble call on River Rouge gave the Orioles the ball back a few seconds later. 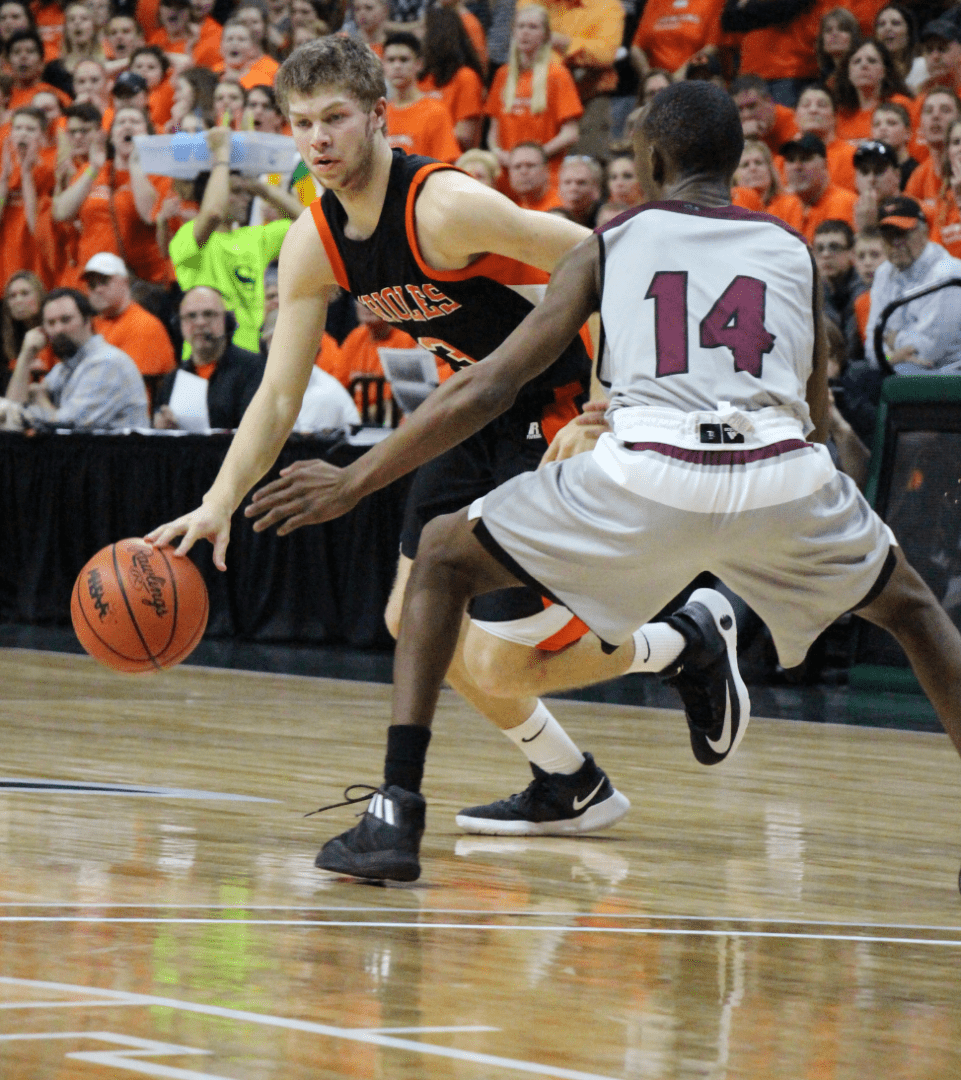 Noah Laman’s 3-point attempt with eight seconds left hit the rim, but Josiah Bandstra got the rebound, passed the ball to Noah Laman, who kicked it out to his brother in the corner.

Then Josh Laman hit the triple that will go down in Ludington basketball history.

Ludington led 10-6 at the end of the first quarter, and built its lead to 17-6 early in the second. But a spate of turnovers hurt the Orioles in the minutes before overtime, and they clung to a 19-18 lead af halftime.

River Rouge outscored the Orioles 14-9 in the third quarter and had a 32-28 lead at the buzzer.

But the Orioles clawed back, getting a triple from Hackert with 1:32 left and bucket from Cameron Bandstra with a minute remaining to pull within four points.

Two Panther turnovers in the final minute gave Hackert the chance he needed to hit a 3-pointer with 49 seconds left, and one of two free throws with 20 seconds left, to force overtime

That’s’ when the final miraculous comeback occurred, and Ludington advanced to the state finals.

“I thought our guys really picked it up,” Hackert said about his teammates’ play after he left the game. “Sam and I fouled out, and so many things didn’t go our way, but our subs picked it up. They picked up our spots.”

Hackert finished with 20 points and Josh Laman had 11 for Ludington. Hackert and Noah Laman had four rebounds apiece while Bandstra dished out five assists.

Shank said his team will again embrace the underdog role when it plays powerful New Haven for the state title on Saturday.

“It’s great being the underdog,” the coach said. “We haven’t been that until probably tonight for the most part or maybe the quarterfinals. We have nothing to lose. Nobody thought we’d be in the state championship game on November 15.

“We’re just having a lot of fun together because we only have one day left. We’re just enjoying the journey.” 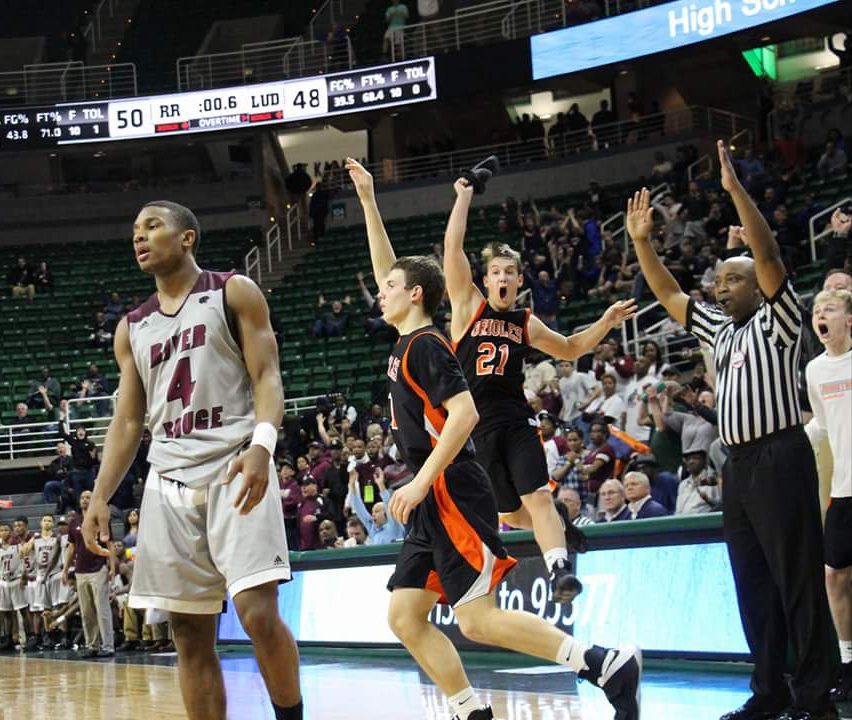 Ludington’s Joshua Laman holds his follow through after his game-winning 3-pointer and Calvin Hackert reacts after buzzer beater. Photo/Jason Goorman 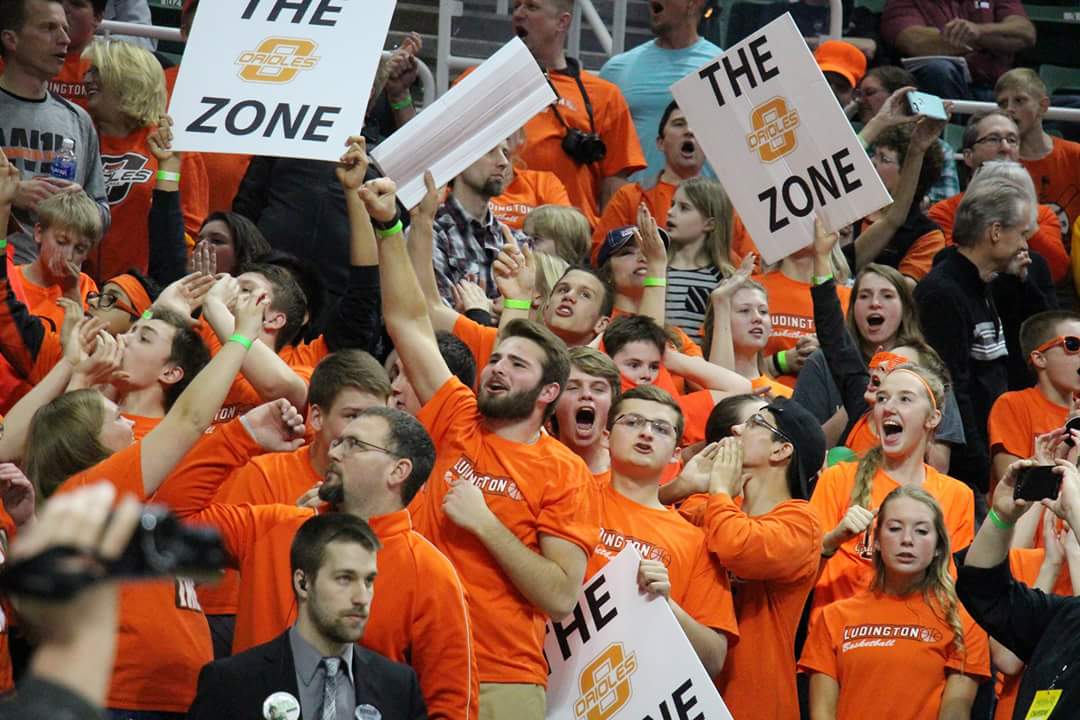 Ludington student section gets into the game. Photo/Jason Goorman 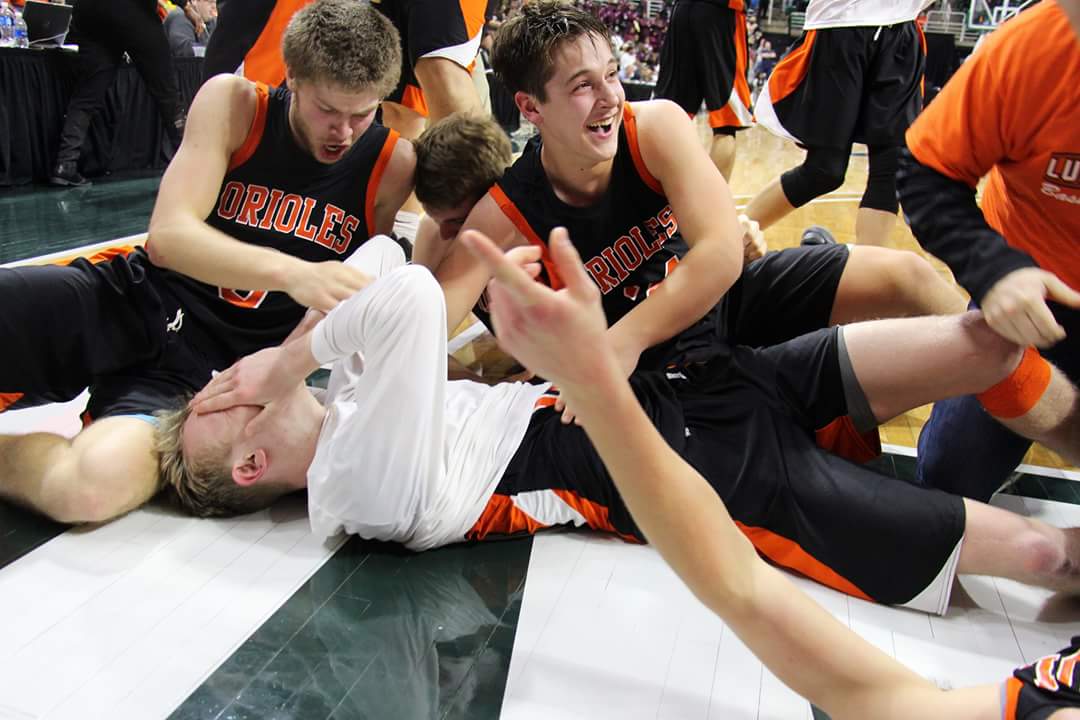 Calvin Hackert (top right), Jared Collins, Sam LaDuke (on floor) and the Ludington team piles on top of eachother after the Orioles pulled out the over time win. Photo/Jason Goorman 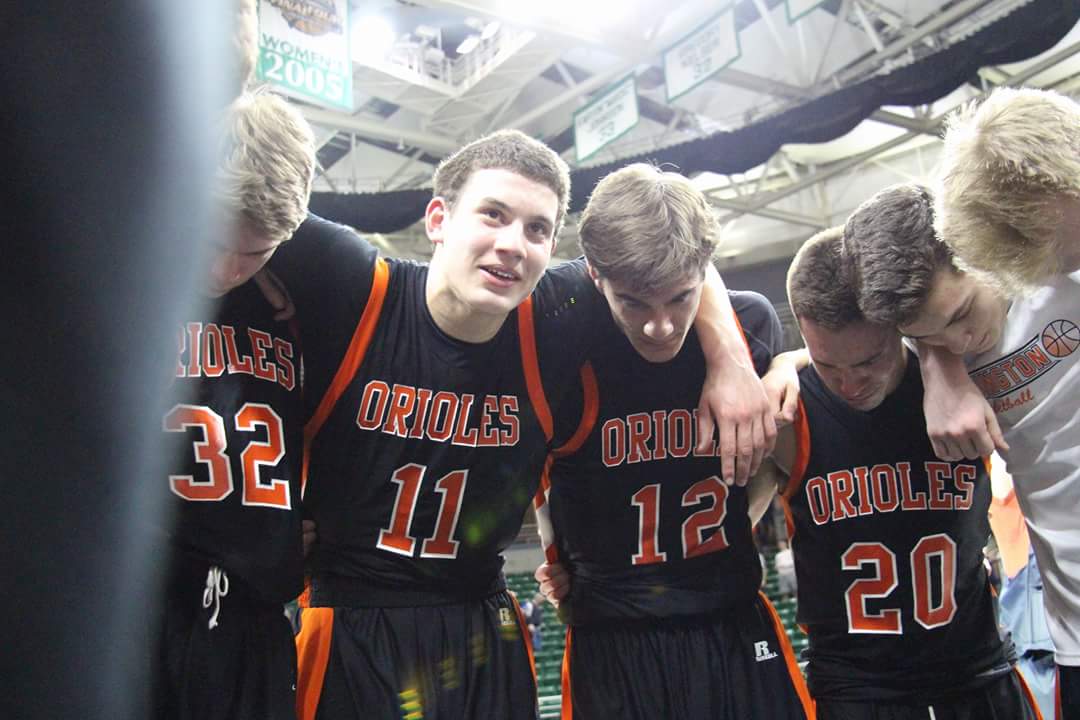 No. 11 Joshua Laman stands in a Ludington huddle at half court with No. 12 Josiah Bandstra, No. 20 Cameron Bandstra and No. 32 Will Sadler. Photo/Jason Goorman 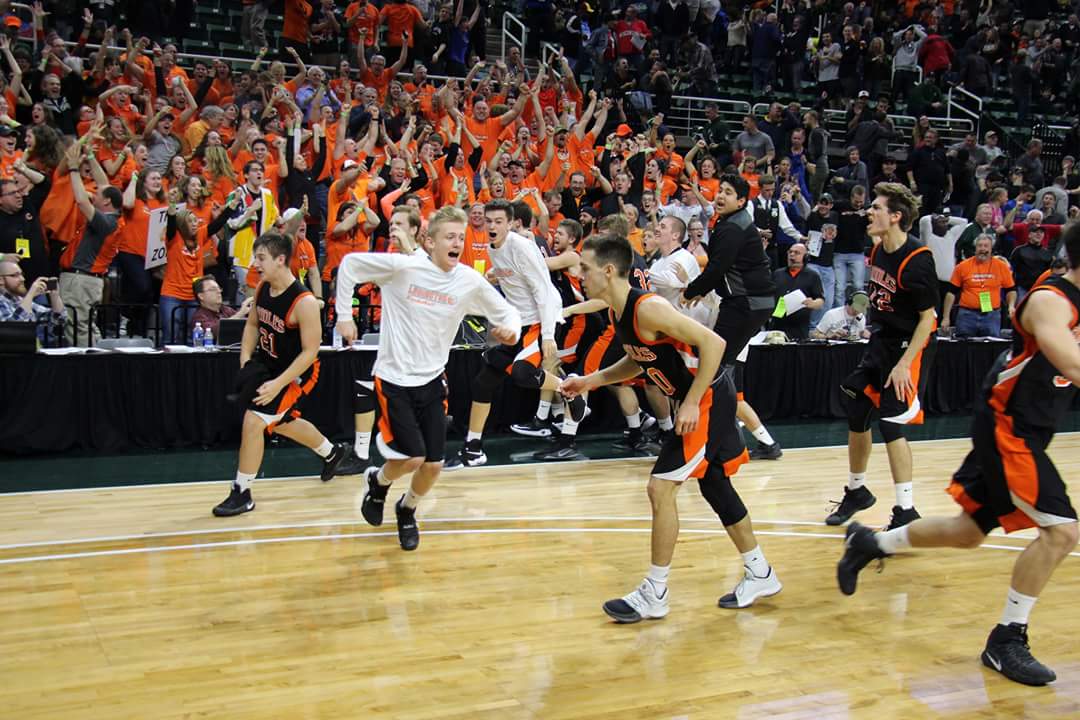 Ludington players charge the court after their team’s berth into the Class B state finals. Photo/Jason Goorman