The Ironmen, who came one victory away from winning a championship last year in the AIF, 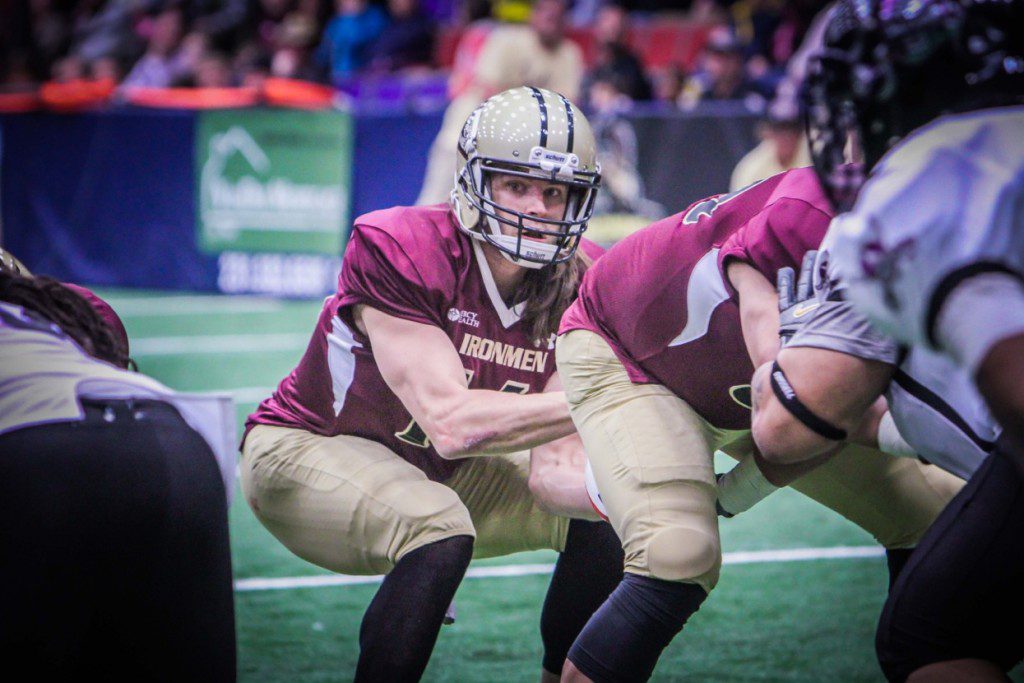 Quarterback Alex Carder in action for the Ironmen. Photo/Joe Lane

lost their first three games this season after transferring to the more challenging CIF.

But they broke through last Saturday with their first win 64-57 over the Bismarck Bucks in a road game in North Dakota.

Now the Ironmen will have a fresh outlook when they return home to host the Bloomington Edge on Saturday at 7:05 p.m. at L.C. Walker Arena. West Michigan, 1-3 on the season, will be looking to avenge an ugly 64-20 opening-game loss to Bloomington.

“The last game against them got away from us in all sorts of ways,” Ironmen Coach Ty Lynk said about Bloomington. “I think it (the opening loss) made us grow as a team, so from my standpoint I am looking forward to playing against them.”

The loss to Bloomington was the first of three painful season-opening defeats for the Ironmen.

That made their win last Saturday in Bismarck a huge relief.

The Bucks rallied to grab a 57-56 lead with 6:48 remaining in the game on a one-yard run by Tyler Floyd.

But the Ironmen bounced back on their next possession with a 16-yard touchdown run from Korey Ringer with 5:33 left in the game to claim their first victory of the year.

“I never thought a win would be as good as that one was,” said Lynk. “We have been gripping the bat pretty tight, and it’s good to get that win out of the way, because I think now we can play a little more freely.

“I really felt pretty good about where we were going the last three weeks.”

Ironmen quarterback Alex Carder had a great game against Bismarck, throwing for 143 yards on 10 completions, including three touchdowns.

Carder was named CIF Offensive Player of the Week for his performance.

“The best way to describe Carder is he is just rock-solid,” said Lynk about his veteran quarterback. “He is a competitor and he has asked our guys to step up in the last few weeks.”

Receiver Corey Johnson caught six passes for 83 yards and two touchdowns while Donovan Campbell had three catches for 50 yards and a touchdown and Ringer rushed for 47 yards on 11 attempts and found the end zone twice.

The Ironmen will host Bloomington on Saturday with a sense of urgency. They are currently tied for fourth place in the CIF North Division with Kansas City.

Only the top three teams in the division make the playoffs, so the Ironmen have their work cut out for them.

The Sioux City Bandits are in first place in the division with a 5-0 record. Bloomington (4-1) is in second place while the Omaha Beef (2-2) is in third.