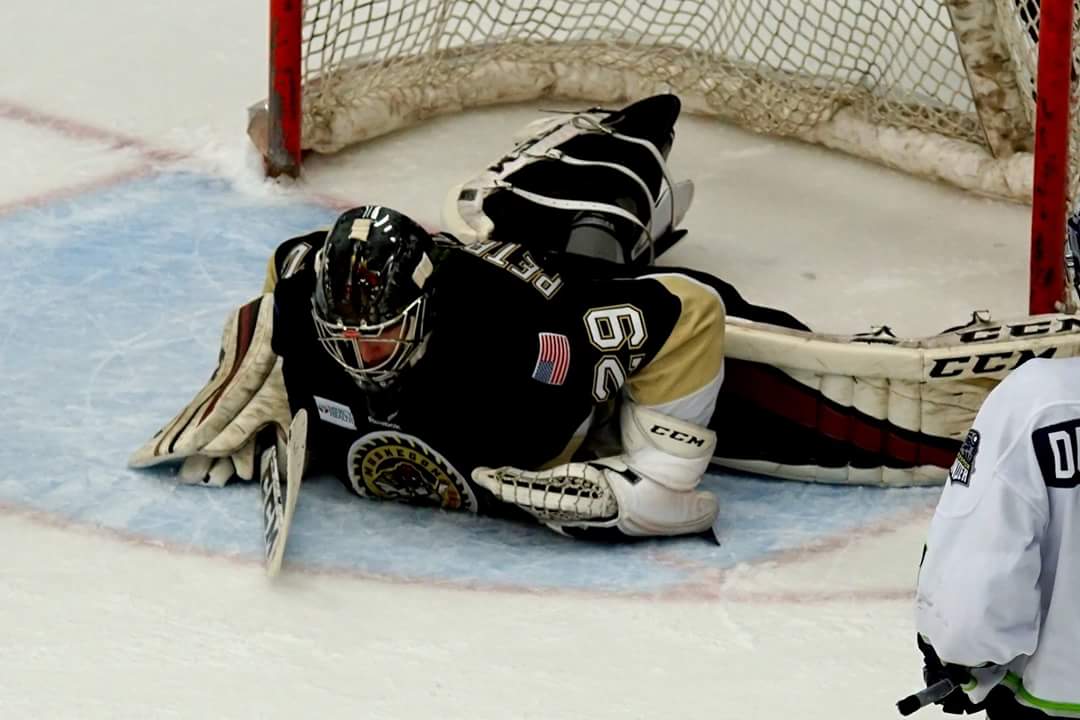 MUSKEGON – The Muskegon Lumberjacks are back in the USHL playoffs after a one-year absence.

The Jacks clinched a spot in the postseason with a 5-2 victory over the Bloomington Thunder on Friday in front of 1,928 fans at L.C. Walker Arena. 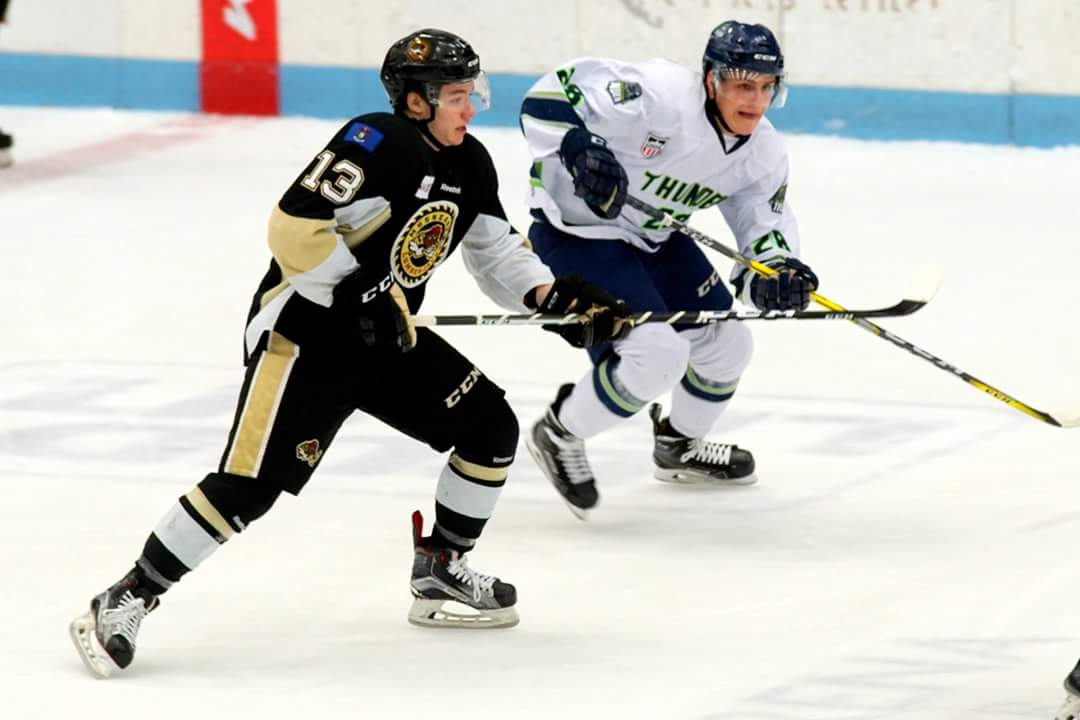 Collin Adams races to the puck for Muskegon. Photo/Leo Valdez

In the process they also tied a franchise record for regular-season victories with 35.

The Jacks, now 35-18-4 on the season, have three remaining regular-season games, starting on Saturday night when they host the Team USA Under-17 squad in their final home game.

The victory also kept the Lumberjacks in the race for an Eastern Conference championship. They are currently in second place, only three points behind first-place Chicago.

Muskegon will be in the playoffs for the first time since the 2014-15 season, when they advanced all the way to the Clark Cup finals before losing to Sioux Falls.

The identity of the first-round playoff opponent has yet to be determined.

“I was proud of how ours guys played tonight,” said Lumberjacks Coach John LaFontaine. “They played a good, solid 60-minute game in front of the home crowd. 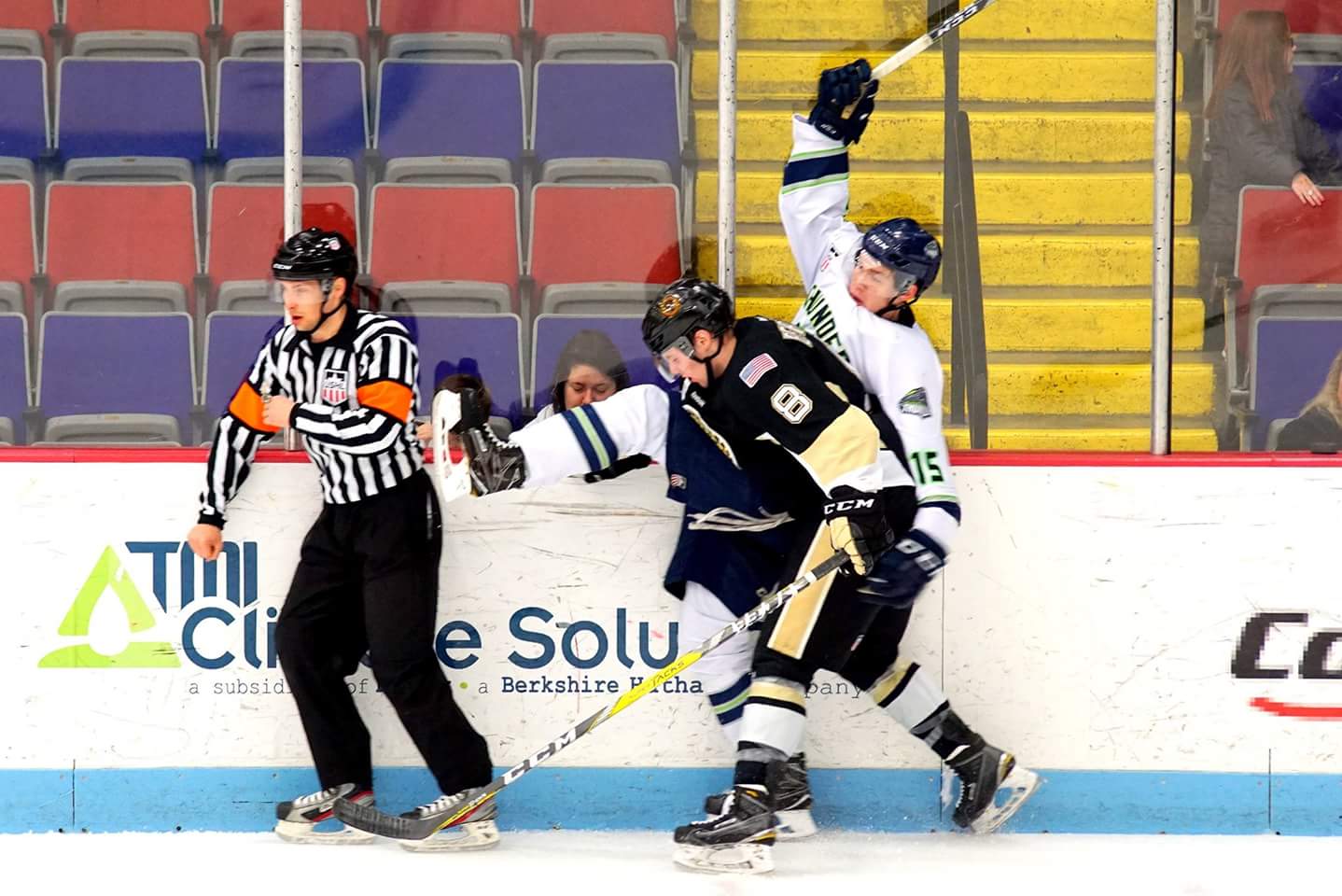 “There is a great bunch in that room. I credit the organization for picking the team and building a team that could develop and get better. We are strong and deep at every position. It has been fun to see these guys have some success.”

Muskegon was led by Andrei Svechnikov and Jachym Kondelik, who each had a goal and an assist. Austin Albrecht, Casey Gilling and Garrett Van Wyhe each added a goal.

The Lumberjacks jumped out to a 1-0 lead 42 seconds into the contest on a goal from Svechnikov, then went up 2-0 at the 8:06 mark of the first period on a goal by Albrecht.

Bloomington responded with a power play goal from Christiano Versich late in the second period to cut its deficit to 3-1.

Muskegon closed out the scoring with an empty-netter from Van Wyhe with less than a minute left in the game.

Keith Petruzzelli picked up the win in net for the Lumberjacks, stopping 28 of 30 Bloomington shots.