MUSKEGON – Most of the Muskegon Lumberjacks have yet to experience the USHL playoffs.

A few were on the Jacks’ roster last season, when the team failed to qualify for the

playoffs. The majority of the players were not in the league yet.

But Bo knows, and he yearns to relive the feeling of playoff success.

Bo Hanson, a third-year Lumberjack and the team’s captain, is the only remaining member of the Muskegon squad that made the playoffs two years ago and advanced all the way to the Clark Cup finals.

“I got a taste of it my first year,” said Hanson, 19, a native of Boise, Idaho. “It was an unbelievable experience. We’re looking to get a taste of it again, and hopefully change the ending a little bit.”

Now Hanson has a second and final chance to win a championship before ending his USHL career and moving on to play at St. Lawrence University in New York this fall.

The Lumberjacks, who finished tied for second place in the Eastern Conference with Dubuque in the regular season, will begin a first-round playoff series against the Fighting Saints this weekend.

Hanson hopes the playoffs go just as well as they did two years ago – and a little bit better.

He was there when the Lumberjacks, who finished fourth in the Eastern Conference standings that season, stunned first-place Youngstown in the first round of the playoffs, three games to one.

The Jacks came from behind in all three of their wins in that series.

He was there when the Lumberjacks upset second-place Dubuque in the conference finals, three games to two. The Jacks’ last two victories in that series came after two ugly losses, by five and six goals, respectively.

“That was a crazy playoff run,” Hanson said. “It was just a lot of guys buying in and believing in each other, and we almost got the results we wanted.”

Hanson was also there for the bitter end to the playoff run, when the Jacks were swept by Sioux Falls in three games in the Clark Cup finals.

“We may have gotten a little tired, and maybe had some bad luck in some instances,” he said. “There were a lot of sad faces in the locker room after that last game. I don’t want to experience something like that again. We want to focus on winning.”

There are a lot of similarities between the 2014-15 Lumberjacks and this year’s squad.

The 2014-15 team had a so-so record through the first half of the season, then hit the gas and made the playoffs. That isn’t easy to do in the USHL, where only eight of the 17 teams qualify for the postseason.

The 2014-15 squad set a new franchise record for regular-season victories with 35.

This season’s Lumberjacks have followed the same path. They were 16-11-2  through December, then got hot in January and finished tied for second place in the Eastern Conference, just three points out of first. 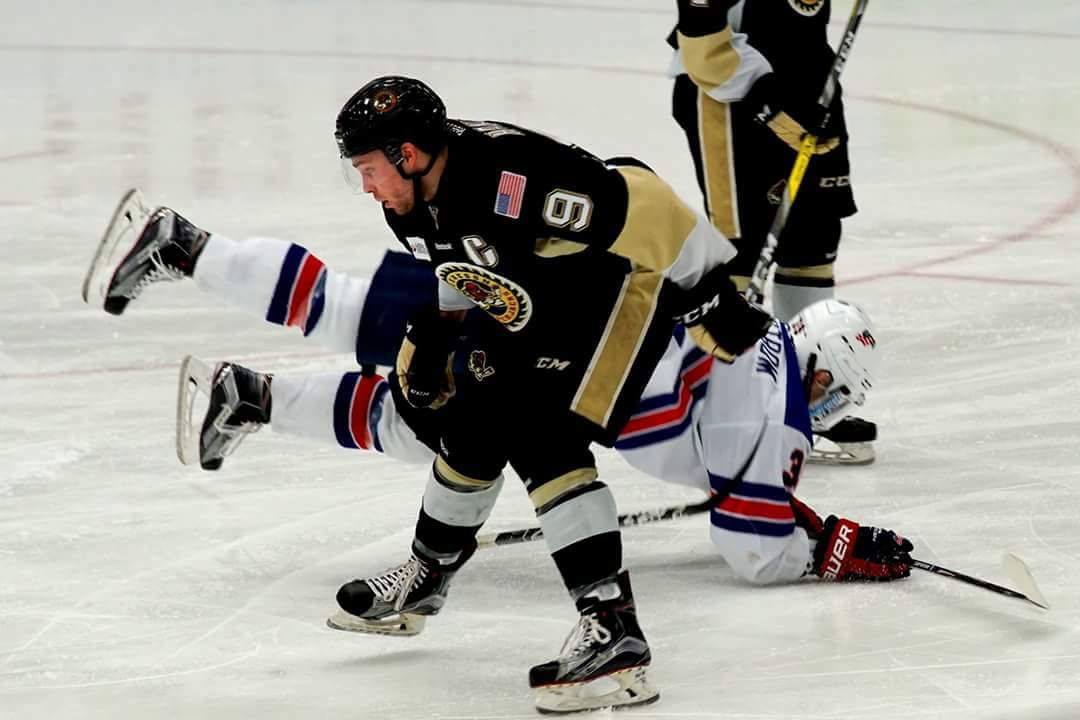 Hanson in action earlier this season.

While Hanson is the only leftover from the 2014-15 squad, he said the mentality in the locker room has been much the same this season as it was back then.

“My first year we had a championship on our minds all year,” Hanson said. “That’s kind of how this year has gone, as well. Our goal was to take each weekend as they came, make the playoffs, then do some damage.”

The Dubuque squad the Jacks will be facing is also very similar. Simply put, the Fighting Saints are always good. They have qualified for the playoffs for seven straight years and won the Clark Cup in 2010-11 and 2012-12.

The Lumberjacks are in the playoffs for the fourth time in their seven-year history, and are seeking their first Clark Cup.

“We’ve talked about how they always have a solid team,” said Hanson, whose team split four games with the Fighting Saints in the regular season. “We have a ton of respect for that organization. They have a magic recipe or something.

“We’ve got to make sure we’re tight defensively. They are very potent on offense and play hard and physical. If we establish our game early in the series, we will have our best chance of winning.”

A new coach, and a breakout season for Hanson

Other things are very different for the Jacks, compared to 2014-15 .

For one thing, there is a new coach in charge. John LaFontaine is finishing his first year behind the Muskegon bench. He replaced Todd Krygier, who was fired last summer after coaching the Lumberjacks for four seasons, including the successful 2014-15 campaign.

While Krygier displayed a more feisty, emotional style of leadership, LaFontaine has a more calm demeanor, and Hanson says that’s been good for the team.

Hanson rips a shot during a recent game.

“I think he’s an unbelievable coach,” said Hanson, who played his first two years under Krygier. “He’s a very calm guy, and that creates a sense of calm in the locker room. He knows the right things to say and how to say them.

“He has taught me a lot about checking my emotions – I can be pretty high strung at times – and about conveying positive messages to the team and doing the right thing. I have the utmost respect for the man.”

Another big difference for the Lumberjacks this season is Hanson himself.

In his first two seasons, Hanson was a solid defenseman who rarely played a direct role in the team’s scoring.

As a rookie he had one goal and four assists. Last season he had no goals and seven assists.

But this year he has become a major force in the Lumberjacks’ attack with six goals and a whopping 32 assists. He’s fifth on the team in scoring (behind Andrei Svechnikov, Collin Adams, Austin Albrecht and Austin Alger), and third among Lumberjacks who have been on the squad all season.

Hanson said his increased production has simply been a matter of getting more opportunities. Besides playing a regular defensive shift every game, Hanson is also a key member of the Lumberjacks’ power-play unit.

‘My first two years I had a more limited role,” Hanson said. “Now I get to play in more situations than I did in the past. I worked hard last summer and good things have happened.

“I guess maybe I’m a little surprised (at his sudden knack for piling up points), but I had goals for myself this season, and one of them was to put up a few more points that I did the past couple of years.”

Perhaps Hanson’s most revealing statistic is his plus-19 rating, which is fourth-best on the team. That means the Lumberjacks have scored 19 more even-strength or shorthanded goals than their opponents when he’s on the ice.

That statistic says a lot about Hanson, according to LaFontaine.

“That actually means his defense has been very solid, as well,” the coach said. “He’s not just a one-dimensional player.”

LaFontaine said Hanson’s skills were obvious last year in training camp – it was just a matter of gaining confidence.

“I saw that he had some of the best feet I’ve ever seen in a junior player,” he said. “He was quick, explosive and played heads up and strong. I just kept counting all the positives he had.

“But the processing was an unknown, and that’s an area where he just kept getting better. He gained confidence, and once that set in, the composure and poise set in.”

Grand Haven softball team rallies for one win, cruises to another